And why was it upcycled from an abandoned ship's timbers?

As each new American President moves into the White House, they have their choice of what kind of desk they'd like in the Oval Office. Not all of them stick to tradition, with some opting to swap out their predecessor's worksurface. 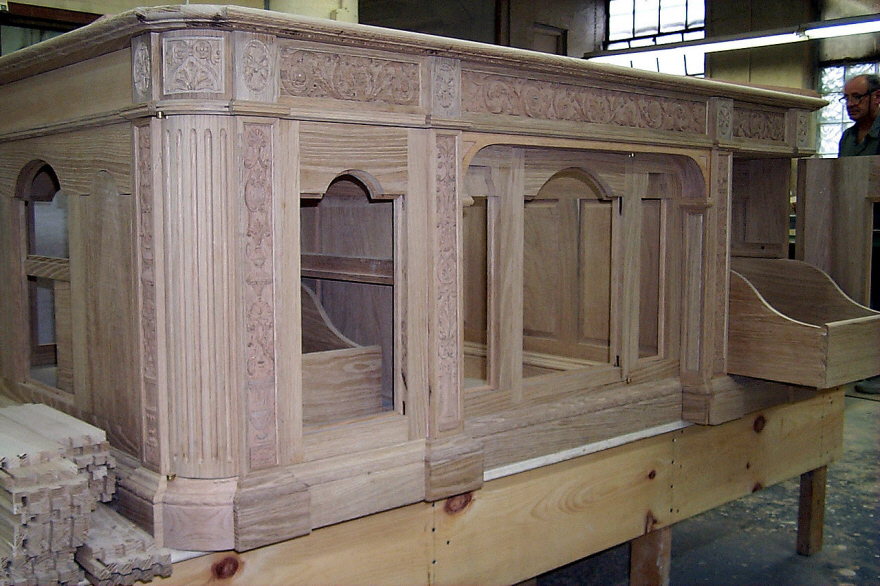 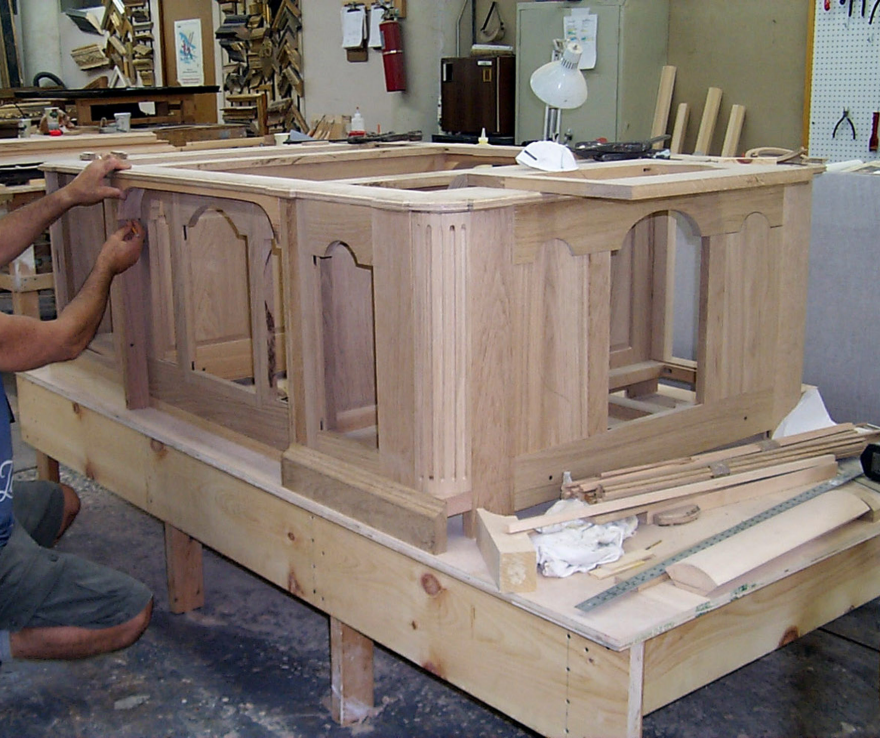 But the desk that's presently in the Oval Office is on a bit of a run, having been used by three Presidents in a row (Clinton, the most recent Bush, and current President Barack Obama). Prior to Clinton it had been swapped in and out of use. The desk dates all the way back to 1880, when then-President Rutherford B. Hayes received it as a gift from England's Queen Victoria. That's right, the desk was not manufactured in America—that distinction goes to the Chatham Dockyard in Kent—and it was made with British timbers pulled off of a scrapped British ship. 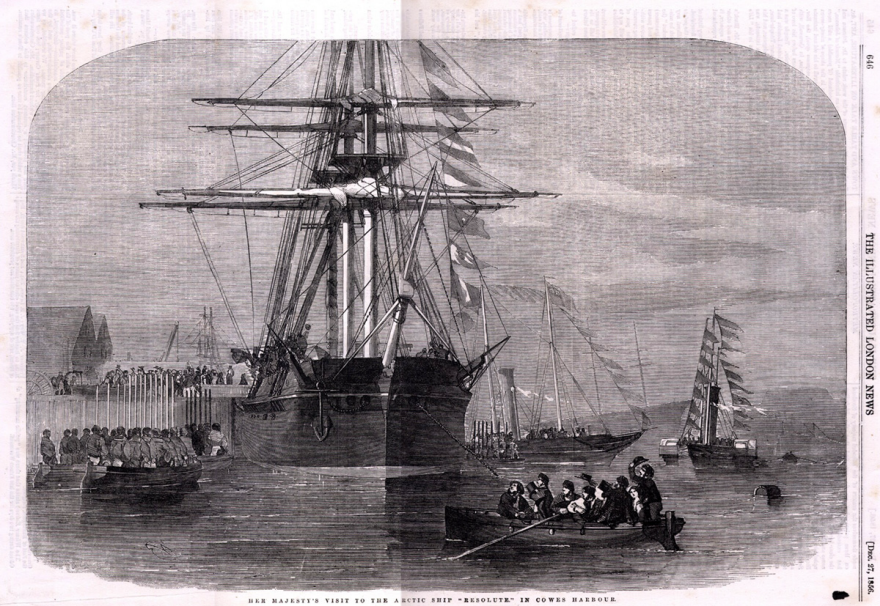 And no, Great Britain was not sending us a desk made from waste. This ship has particular historical significance and, prior to being scrapped, impressive survivability. HMS Resolute was part of a five-ship convoy Britain deployed in 1852 to search for a missing explorer. Sir John Franklin had disappeared in the Canadian Arctic some years earlier, and the ships were sent to search for him.

After a fruitless two-year search, four of the five ships, including Resolute, were stuck in ice in the Canadian Arctic Archipelago. Expedition commander Sir Edward Belcher ordered the four ships abandoned, and the party sailed back home on the remaining ship and two relief ships sent to fetch them.

Resolute was one of the abandoned ships. She was still seaworthy, and as the ice began to melt, the ship began drifting. With no crew, she traveled 1,200 miles to the east. In 1855 she was spotted by American whaler James Buddington in the region of Greenland. Buddington divided his crew between his ship and Resolute, and they sailed their prize back to their home base in Connecticut.

At the time British-American relations were growing poor, with then-President Franklin Pierce expelling Britain's ambassador to Washington over colonial disputes. Some worried of another U.S.-British war, remembering that British troops had set fire to the White House some 40 years earlier. Virginian Senator James Murray Mason, upon learning of Resolute's recovery, proposed the ship be refurbished and sent back to England as a gift.

Congress scraped together $40,000 to pay for Resolute's refurbishment, which was done at the Brooklyn Navy Yard. At the end of 1856, it was sailed back to the UK and presented to Queen Victoria as a gift, easing the two countries' tensions. 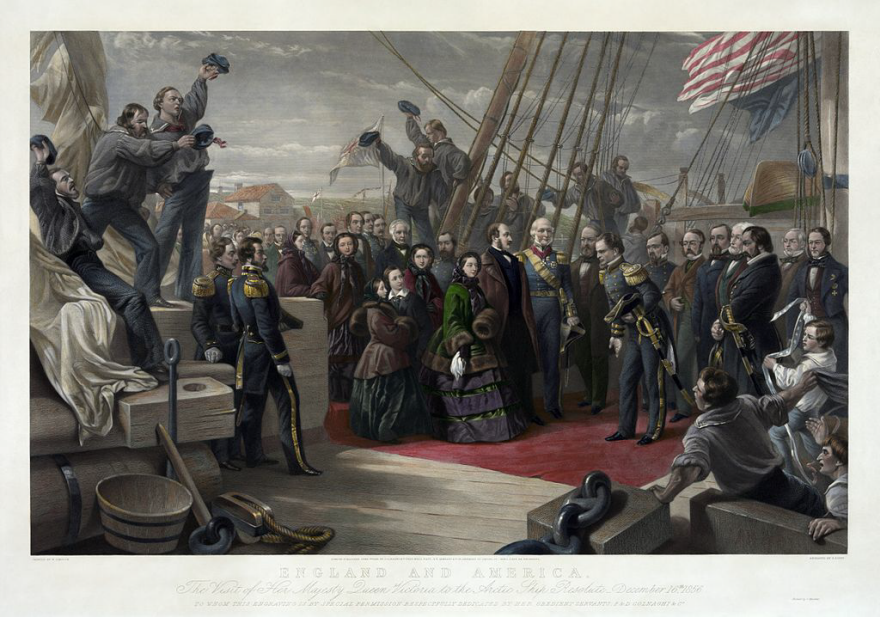 Resolute was reinstated in the Royal Navy, but never ventured into foreign waters again. In 1879 it was finally broken up at the Chatham Dockyard. Queen Victoria ordered three desks to be produced from the ship's timbers. One was for the Royal Yacht; a second was for the widow of Henry Grinnel, the American philanthropist who had helped fund the original Franklin search; and the third was to be sent as a gift to the White House. Here are some retroactively-created blueprints: 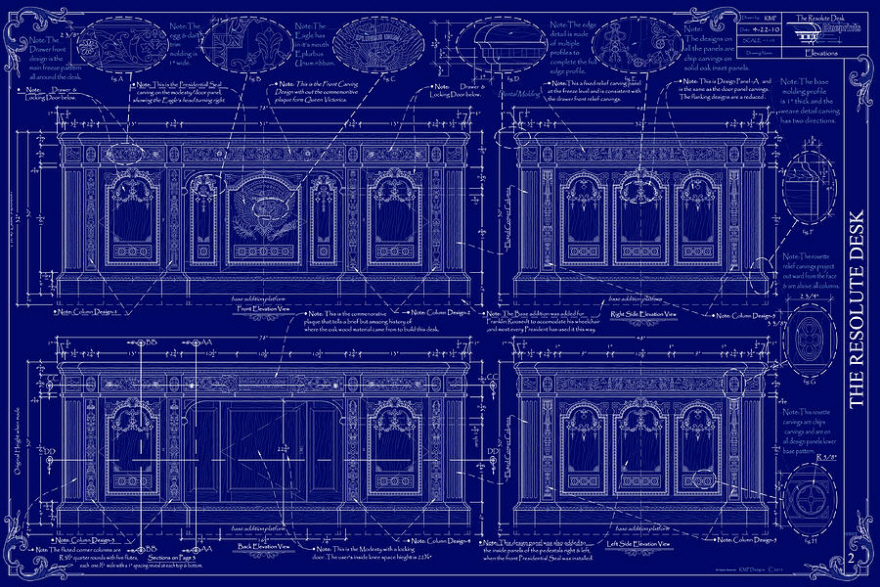 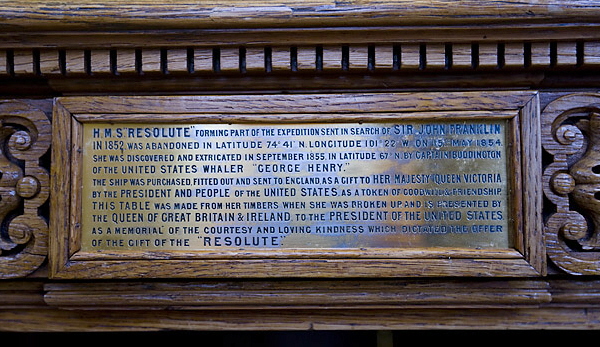 As for the desk itself, it was built in the style known as a Partner's Desk, which was used by banks at the time. A Partner's Desk was meant to be used by two bankers at once, sitting on either side, facing each other to communicate as they went over their ledgers. Thus the original Resolute Desk, as it came to be called, had a large pass-through to accommodate legs on either side. 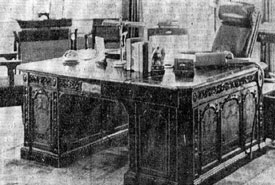 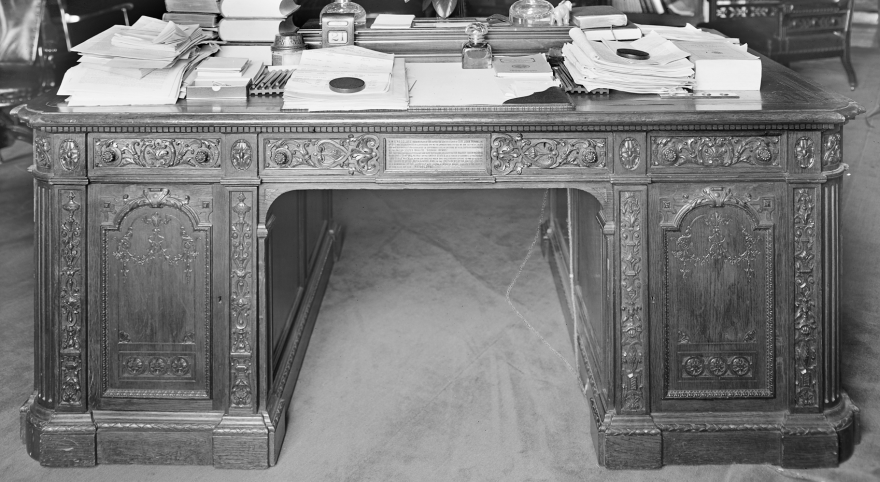 In later years, wheelchair-bound President Franklin D. Roosevelt had this pass-through obscured on the outward-facing side with a hinged panel. This hid his legs from view, as the President's usage of a wheelchair was a well-kept secret at the time. 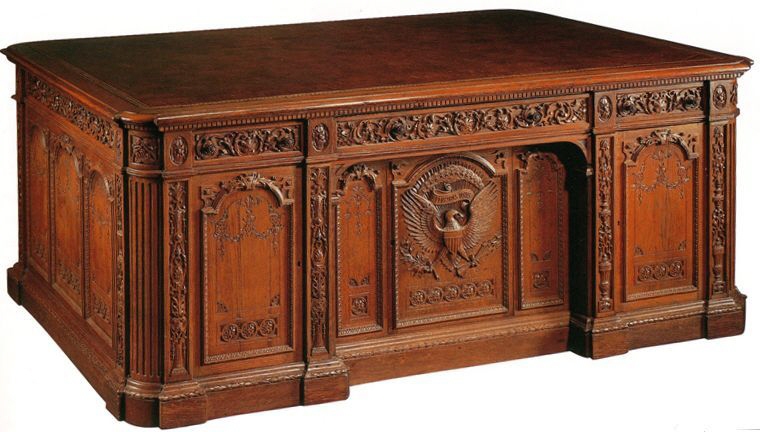 This hinged panel can be seen in the open position in the following Life photo of JFK and JFK Jr.: 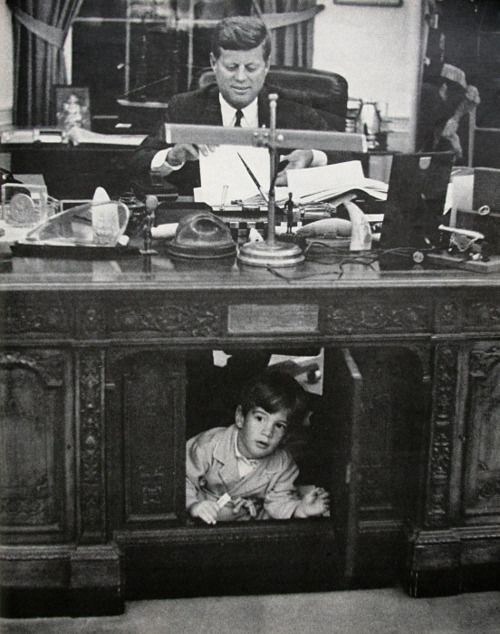 JFK had the desk modified himself, increasing the height by having this riser (rather poorly) added to the base: 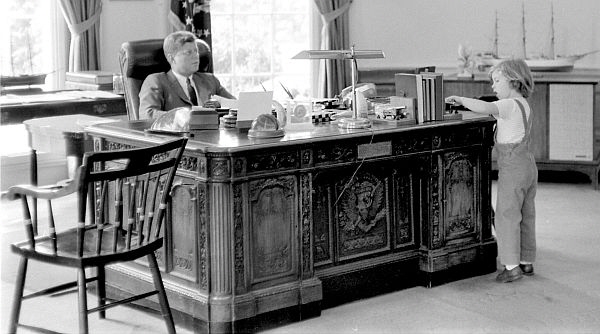 As you can see in the photo below, the base doesn't quite match the original color. It seems closer in tone to the center panel added by FDR, which also doesn't match. 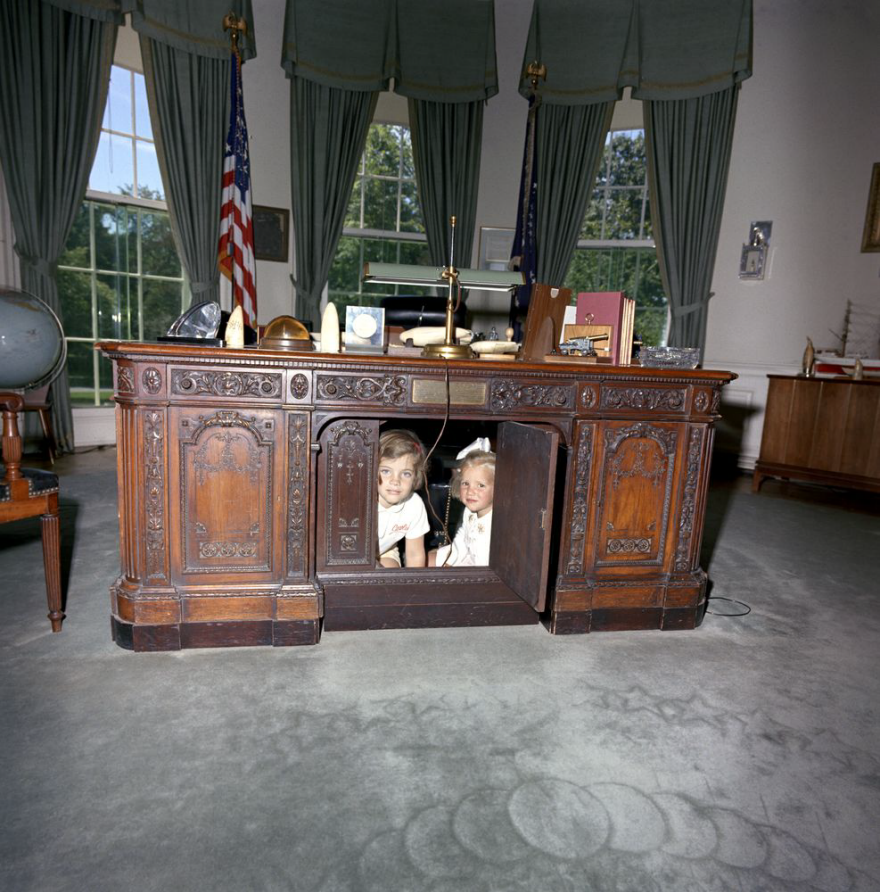 After JFK's death the desk was sent to the Smithsonian. President Jimmy Carter brought it back to the White House in the '70s, where it was subsequently used by President Reagan. The first Bush President got rid of it, but President Clinton brought it back. President Barack Obama still uses the desk, and it appears that the base has been touched up or replaced at some point. FDR's center panel modification also appears to now match the rest of the desk. 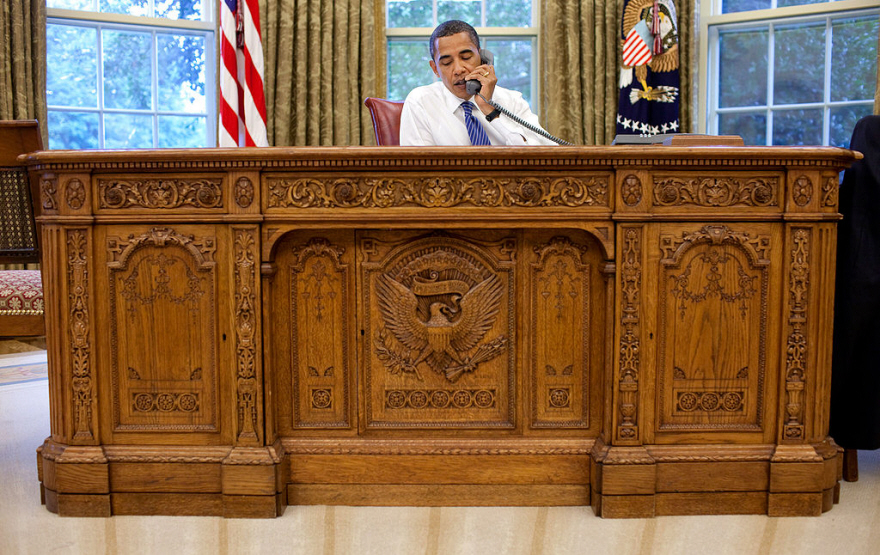 In addition to its modifications, one can only imagine the things this desk has seen through all the Presidents it's served over the years. 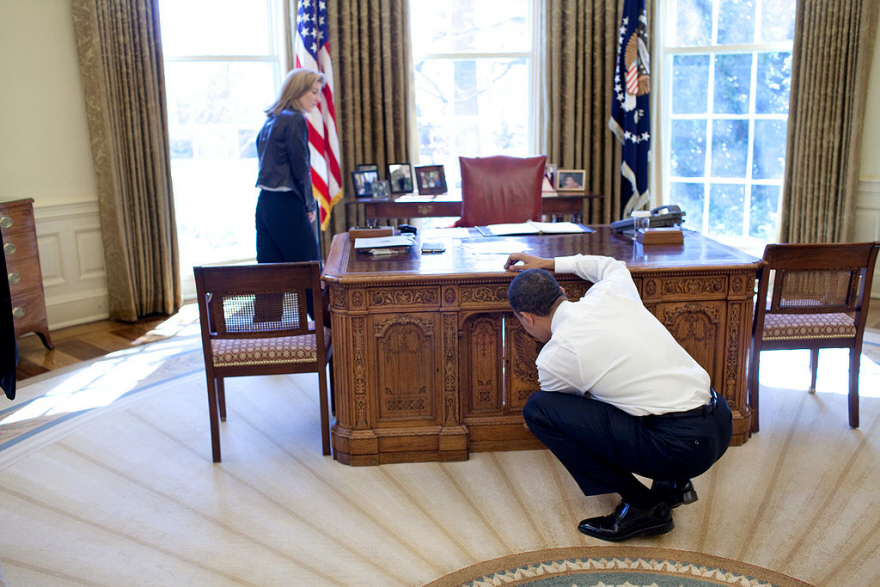 What we'd like to see next: The British Government getting with the times and sending us a standing desk.