The London studio explains the construction of its touch-animated display.

The branding and retail design studio Dalziel and Pow sparked some interest at London's Retail Design Expo last month with a remarkable interactive display created with conductive ink. Attendees were invited to touch any of the numerous illustrations covering the booth walls—doing so completed a circuit and triggered a variety of animated vignettes, from an illuminated light bulb and flashes of lightning to a toy glockenspiel that actually played notes as you touched its cartoon keys.

With a spectrum of designers and producers on staff, Dalziel and Pow was able to tackle the entire project in-house as a collaborative effort between its digital, interiors and graphics teams. "Our main objective was to create a tactical experience," says Ross Phillips, the Associate Digital Design Director of the London-based studio. "We often talk about how giant screens can be intimidating and unapproachable. Conductive ink allowed us to apply the technology to more traditional, familiar, warmer materials."

Using large boards of plywood as its canvas, Dalziel and Pow worked with the silkscreen print studio K2 to print Bare Conductive ink on the boards, which made up the walls of the exhibition. "Our solution was to explore a different direction to find new ways of weaving technology into a physical space and get customers excited to engage with it," Phillips says.

The custom-printed design also allowed the team to play with various touch-points and build interactions around them. Starting with content, the team pulled together a list of stories and possible interactions based on the theme "The Future of Retail." These stories created the foundation for the display and were used to illustrate a series of 48 animations. "Our thinking was that with a broad and diverse range of content, the whole canvas would become a space for the user to play, explore and discover," Phillips says. "But the real challenge for us was to produce such an ambitious amount of content. Most of the illustrations triggered three different animations, and the total number of assets came in at over 250."

This wasn't Dalziel and Pow's first conductive-ink rodeo. The agency had recently completed a similar concept with a store design for the retailer Zippy; this time, it wanted to to use the exhibition as an opportunity to work at a larger scale and push the range of interactions and feedback. At the Retail Design Expo, Dalziel and Pow added projection to the mix, allowing the designers to expand on their initial design with live animations. 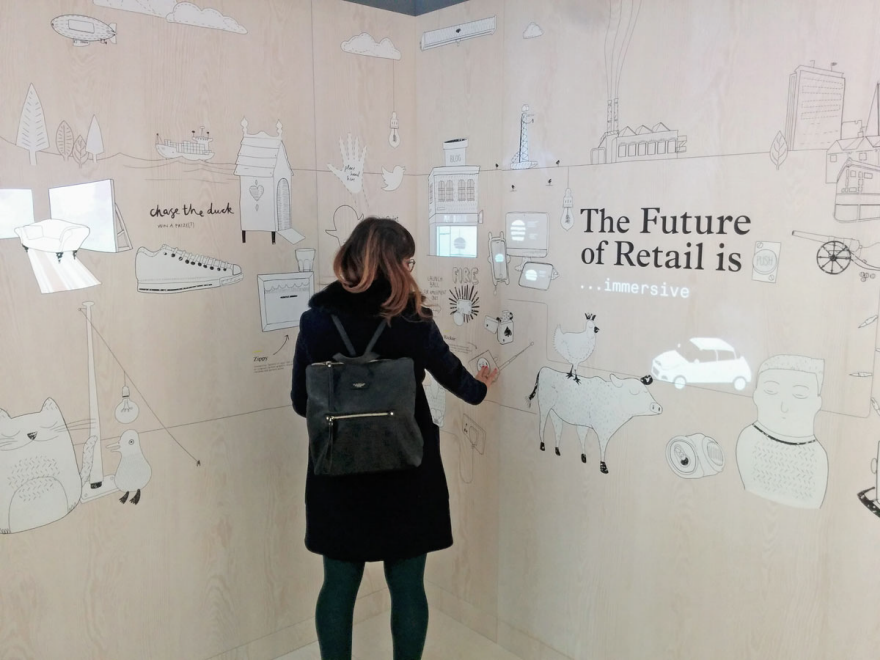 After screen-printing the base layer of conductive ink, Dalziel and Pow applied a layer of (non-conductive) white ink on top to allow for those projected animations—while still remaining thin enough for a visitor's touch to complete the circuit. The conductive ink was then wired to a capacitive touch-board called Ototo, designed specifically for converting touch to sound. Phillips and his team worked with Ototo's creators, the London studio Dentaku, to customize the board to play specific sounds based on where a visitor might interact with the display. With Ototo connected to the installation, the plywood walls became a live circuitry of inputs, which would trigger various sounds and visuals upon contact.

The animations were projected onto the walls from multiple ceiling-mounted projectors, which were controlled using existing projection-mapping software called VJ, most commonly used to visualize electronic music at nightclubs.

Although initially nervous at the prospect of thousands of people interacting with the exhibition over the course of the two-day event, Phillips reports that everything ran without a hitch. "At the first touch, people were instantly hooked, playing with each one of the animations, filming on phones and driving conversations online via social media," he says. "Our approach is to design around the experience rather than the technology itself, and our installation for Retail Design Expo brought this approach to life." For its next iteration, the studio is looking to push the design even further—incorporating more digital tools into its narrative. Until then, you can read more about Phillips and his team's approach to playful spaces over on the Dalziel and Pow blog.

This was the latest installment of In the Details, our weekly deep-dive into the making of a new product or project. Last week, we deconstructed a $260 toilet seat.