Is HTC's design identity in safe hands with their third design leader in just over a year?

When we interviewed Scott Croyle back in 2014 at the launch of the HTC One (M8) in London, fanboys said 'best just got better,' critics said 'unexciting minor design evolution.' The then SVP for Industrial Design gave us little more than a month after publishing our report before announcing his stepping down from his role at the Taiwanese tech firm to explore new avenues.

Twelve months on, HTC announced the One (M9) at the Mobile World Congress with characteristic unwavering refusal to shift the vision for their flagship handset despite the protests of the novelty hungry tech world. Barely a month went by before Croyle's successor Jonah Becker announces his departure from the company. Emerging soon after was the news that Becker will take up a role at the helm of the FitBit design team.

For a manufacturer renowned for its design drive—I've know many an iPhone wielding IDer admit a soft spot for the One's and other HTC icons' purity of form and production detailing. It surely can't bode well for the design leadership to go through such upheaval in such a short period. The show, however, must go on—the announcement of Becker's moving on was accompanied by news that previously creative director Industrial Designer Daniel Hundt would be taking the reigns as the third designer in the boardroom in little over a year.

In almost the reversal of our Scott Croyle exit interview (allaying our lingering fears that our questioning could in any way be held responsible for design exec desertion), we caught up with Hundt in London before the happy announcement of his ascendancy, as part of a promotional UK visit from the then (unbeknownst to us) HTC design heir. 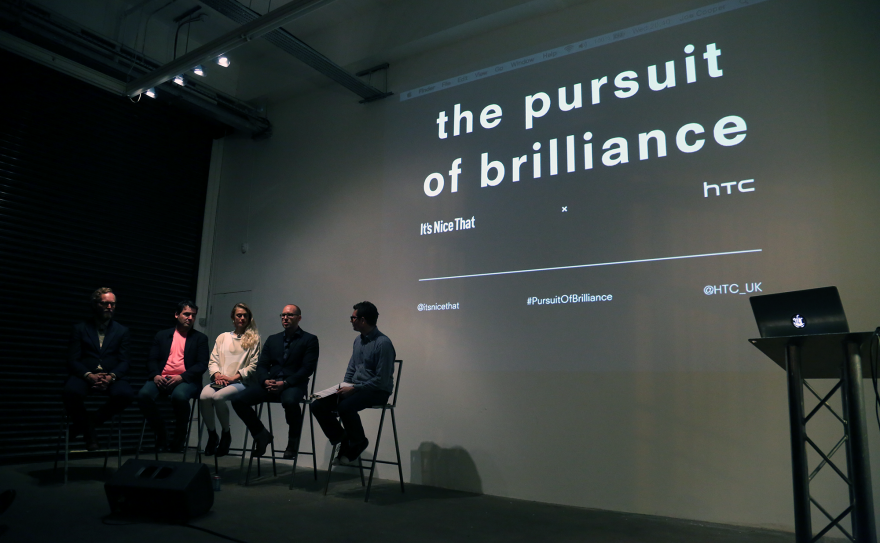 Daniel keynoted an evening of talks hosted by It's Nice That x HTC, taking place at Protein's supertrendy space in East London, with speakers including Plumen founder Nicolas Roope and experimental (and soon to space-bound apparently) artist Lucy McRae. We managed to catch some time with Daniel in the green room before he was called up on stage.

With a friendly and confident smile, Daniel—with a tidy buzz cut, stubble and black rimmed specs have given  some reason to suggest a visual semblance to Jony Ive—  sits us down at a table and wastes no time in launching into a brief bio. From Germany originally (with only a slight accent surfacing over soft West Coast English), Daniel studied at Darmstadt but soon made his way to the US scoring a job at Ziba in Portland via a brief internship at Audi. Soon moving South to SF agency One&Co, Daniel took up the position of Creative Director at HTC  in the years following the tech firm's acquisition of the agency in 2008 (perhaps a forerunner in the agency buy up trends we're now witnessing?).

Daniel traces a desire to be an industrial designer back to around his 6th birthday, when a fascination with objects and manufacturing began. "It's a dream," Daniel tells us, to find himself now at a company so driven by design and so willing to push the boat out industrially. "Not everything is bottom-line rationale at HTC," he tells us with a grin, going on to explain how the corporate leadership is so behind its designers that its prepared to stump up the cash to perfect those design details. 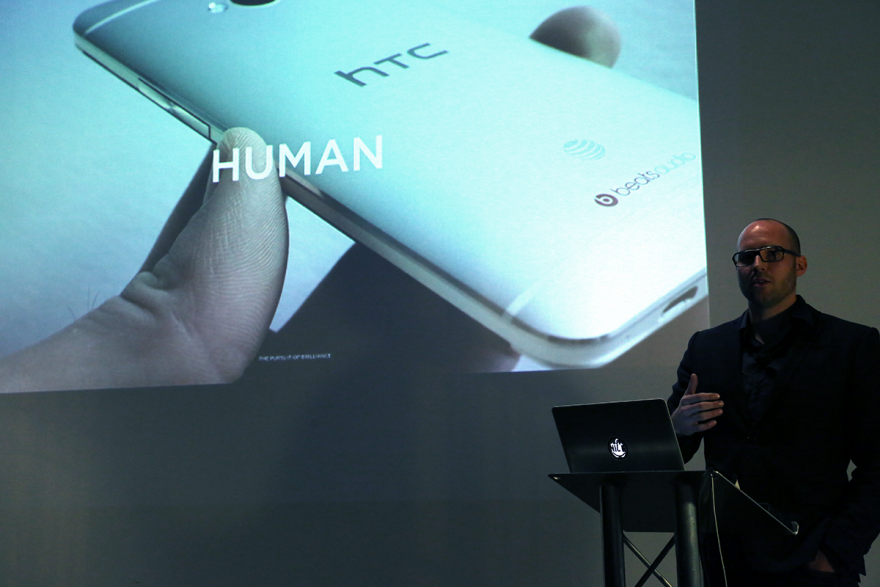 Daniel on-stage talking through the values that influence HTC's design

Case and point (and with a brief, forgivable plug for the new M9 handset) Daniel points to the double anodized body of the latest One. A two-tone metal casing that sets the M9 apart from the M8, HTC have clearly gone to extreme lengths to achieve their design vision—milling 95% of a solid aluminum block for each body and anodizing each twice to achieve a color contrast around the forms edge (the gold and silver being the strongest example)

Perhaps (at-time-of-interview) already quietly conscious of his impending taking of the designerly torch, Daniel is staunch in his defense of the One's enduring design styling. Daniel traces the evolution back to the days when the M7 was on the drawing board and the design team "knew we had hit on something special" when focusing in on the signature—then dubbed "forehead and chin"—design language the handset has endured ever since.

Giving us a small insight into how Daniel's leadership might shape the brand moving forward, he brushes off any criticism of the phone's lack of novelty and newness, standing by a philosophy of "not changing for the sake of change." Daniel compares the stewardship of the One's design language to that of the Porsche 911. "Iconic design is fragile," Daniel says with a reflective gaze to the ceiling. "You have to have discipline to nurture and evolve it," iterating on the design slowly but surely to avoid any destruction of precious design identity.

"In our design process we like to explore wildly, but then we pass our findings back through our values and identify," Daniel adds as we wrap up before he takes to the stage. "It's exciting times at HTC, we're in four categories now," he adds as I slip in a question about the new Oculus-Rift-challenging Vive headset. As we get up from the table, "You can see how we really wanted to push the boundaries of what a headset is...it's a piece of eyewear not a computer, it's got to look good on your face...We've taken a lot of inspiration from eyewear like ski goggles but also tried to be quite true to the technology in the design with the prominent cables front and center." He elaborates, "let's see if it makes it into production like that," he adds with a shrug, smile and a handshake.