Joshua Ben Longo on what it really takes to crowd-fund and mass-produce a terrifyingly cute area rug.

Growing up, Joshua Ben Longo was plagued with terrible night terrors—often waking up in the middle of the night to see ghosts, trolls and forms of smoke tormenting him above his bed. "Sometimes the hallucinations are harmless, but too often they are frightening," says Longo, who still experiences them occasionally.

Fortunately, Longo has found a constructive outlet for his hallucinations in a series of stuffed monster toys and oil paintings that could even be described as . . . cute. Now a senior designer at Anthropologie, Longo has just released his most ambitious, monstrous endeavor to date: the Monster Skin Rug, for which he's currently raising funds on Kickstarter.

Longo got the idea for the Monster Skin Rug back in 2006. The designer had been sewing his stuffed monster toys for a few years, but wanted to move beyond toys to something more substantial. Although he started with a sketch, Longo quickly moved to physical prototyping, scavenging used felt U-Haul blankets from around Brooklyn and cutting them up to create repeating patterns. "I like to start working with my hands as soon as possible after I have an idea," he says. "There is only so far that a drawing can take you. I have always been obsessed with building form by repeating patterns. For the rug, I wanted to combine my love of monsters and the beautiful texture born from repetition." 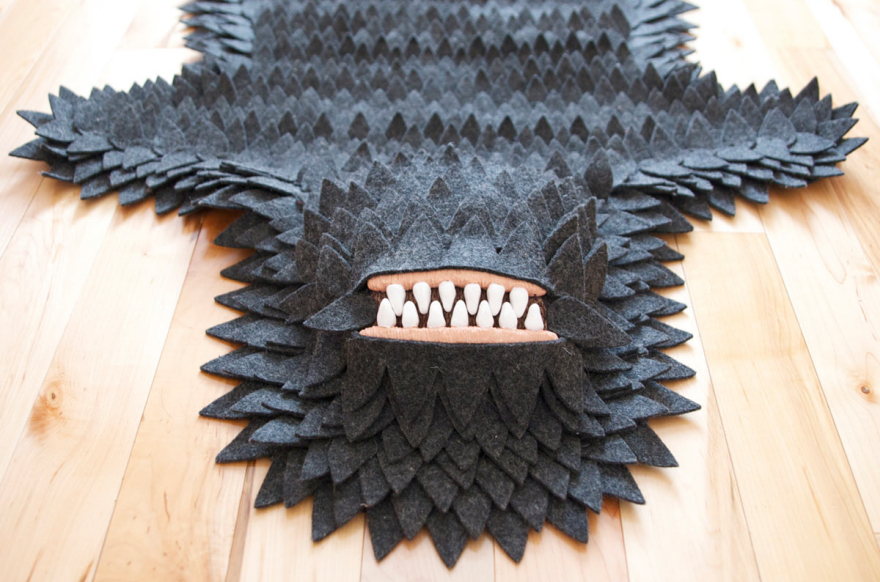 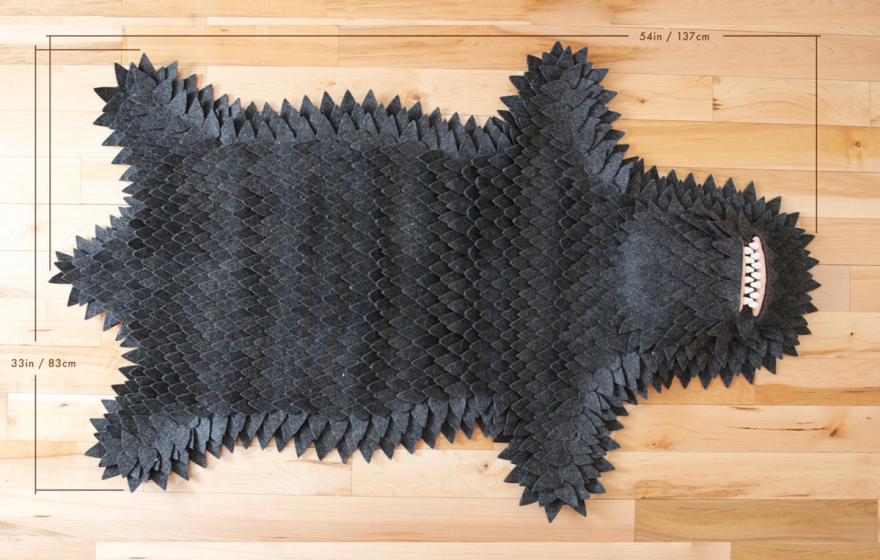 The rug is made from a 60-40 blend of wool and recycled denim. 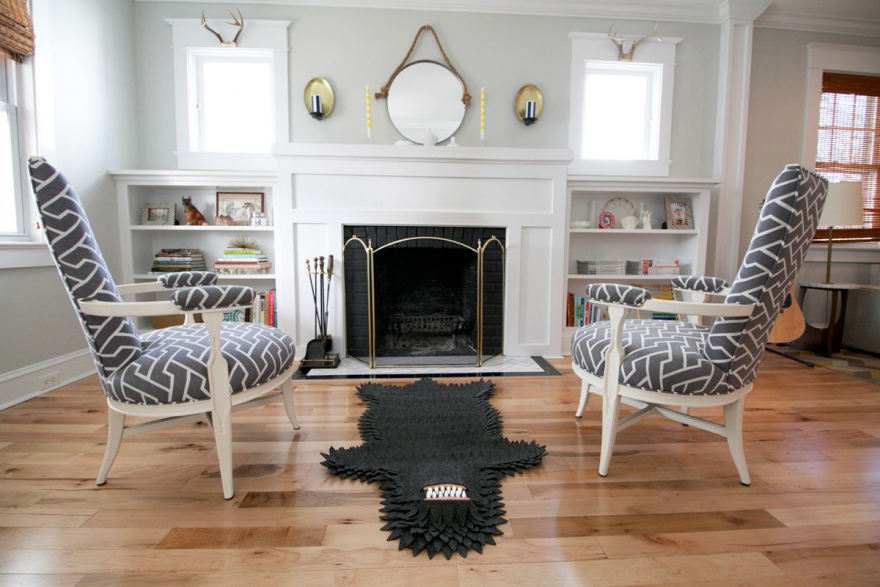 After several texture and pattern studies, Longo went out and purchased swaths of white felted cashmere to build the first model. Cutting small shapes from the material by hand, he outlined a silhouette and hand-sewed each scale onto the skin of the soon-to-be beast. Teeth were crafted from polymer-based, oven-baked clay and the head was filled out with polyester stuffing. Longo opted for no eyes on the rug, believing that it looked more ominous without them.

Over the years, Longo continued iterating on his initial design, moving to gray felt to cut down on visible dirt and buying the material in bulk to reduce the price. The rugs are now made of a 60/40 wool-and-recycled-denim blend, and have a consistency that is a bit tougher than standard 100-percent wool. "Plus you get nice variation in the gray felt when it has a recycled element," Longo says. As he began to sell more of the rugs, Longo had a die made to punch out scales in strips, as opposed to hand-cutting individual scales. "Hand-cutting each individual scale for one rug was peaceful and meditative to do once," Longo says. "It's awful to repeat over and over." 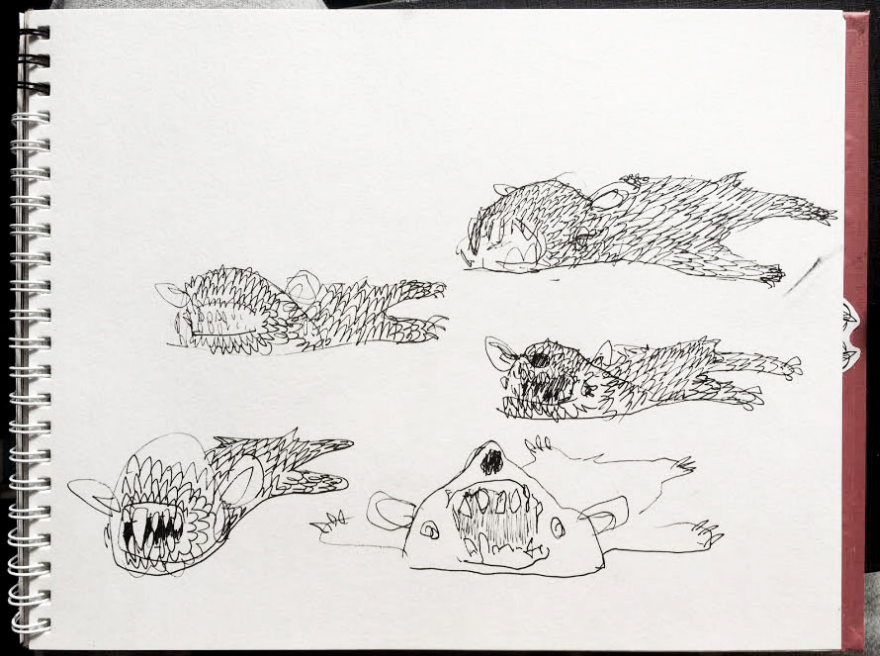 With his Kickstarter campaign, Longo is hoping to scale production even further, moving all steps of the process to a manufacturer overseas."I reached out to several American manufacturers and they all refused to work on producing this rug," Longo says of his decision to go outside the U.S. "I searched for a year before I took the rug to a manufacturer in China. The factory I'm working with specifically makes soft toys, but was happy to take on the challenge of mass producing the rug." Longo has been working with the manufacturer for the past ten months to perfect the final design and make sure it's ready to scale.

While Longo continues to hand-sculpt each tooth from clay, for his Kickstarter the designer is outsourcing that step as well, working with another factory to have the teeth cast in ABS plastic and painted. "The quality of the teeth has been tricky, but most people won't even notice the difference," he says. "I haven't decided yet, but I may have the gums over-molded with TPE [soft plastic]. The factory and I are working this detail out now."

While moving production to China has been a pretty breezy process, Longo says that the biggest challenge has been figuring out the logistics and marketing for his Kickstarter campaign. "It doesn't matter how much preparation you put into a project like this, you will have to do two to three versions before you get it right," he says. "I spent so much time trying to make the project look good that I didn't anticipate how difficult it is to get people's attention on the Internet—never mind asking them for money. Design school doesn't exactly prepare you for these scenarios. For me, convincing an audience that $425 is totally worth it for a labor-intensive—and, I dare say, amazing—Monster Skin Rug is a challenge." Between video edits, photo shoots and manufacturing, Longo says he has now spent a total of six to seven thousand dollars to bring the campaign to life.

While $425 might sound a bit steep for a whimsical 33-by-54-inch rug, Longo says that he priced the product to cover manufacturing, warehousing and transport after selling the first 300—and that success mass-producing the rugs will eventually lower costs. "I anticipate selling wholesale, in which I case I would sell them cheaper," Longo says, adding that he will be making "essentially no profit" from the Kickstarter campaign.

But if he can use Kickstarter to turn his Monster Skin Rug into a viable product, he certainly hopes to generate enough profit to invest in the next product. "I don't have the luxury and get up, make art and not worry about paying bills at this point in my career," he says. "My intention for this campaign is to slowly start a business and allow myself the time to expand into other mediums. Products, puppets, cartoons, movies, music… I really want to do it all."

This was the latest installment of In the Details, our weekly deep-dive into the making of a new product or project. Last week, we examined an amazing interactive touch wall.