We talk to the inventors of the inside-out KAZbrella, now funding on Kickstarter.

Anyone who has grappled with a slick, wet umbrella on a rainy day knows the struggle. Collapsing the thing, you're either going to poke someone in the eye or drench yourself in the very raindrops you were hoping to avoid. Enter the KAZbrella, an inside-out umbrella on a mission to revolutionize the entire industry.

How does it work? While it looks like a traditional umbrella when in use, the KAZbrella—which is now funding on Kickstarter—folds closed from the inside out, with the crown of the canopy sliding downward along the shaft toward the handle. According to its London-based inventor, this creates a couple of major advantages. Most importantly, it means that the dry interior of the umbrella becomes the exterior as it's collapsed, so the user never has to handle the wet material. It also makes getting in and out of the car with an umbrella much easier, as you can see in this promo video:

Jenan Kazim began working on the concept back in 2000, when his mother-in-law complained that dripping wet umbrellas were ruining her hardwood floors. Working full-time as an offshore engineer for Hybrid Energy Services, Kazim started brainstorming potential solutions, developing his ideas on nights and weekends. "Although, I was always thinking and sketching ideas," Kazim admits. That work paid off when the designer was granted a patent for one of his ideas, a pulley-and-string system, in 2010.

In 2012, Kazim was approached by a television company that wanted to include him in a documentary called Make Me A Millionaire Inventor. The inquiry generated more interest in the product and prompted Kazim to pull back on his hours as an engineer to focus more on the umbrella. The project became a family affair later that year when his daughter, Riann Kazim, joined to assist with the 3D drawings for the prototypes, and his wife, Wendy Kazim, became part of the team to help with other aspects of the design. 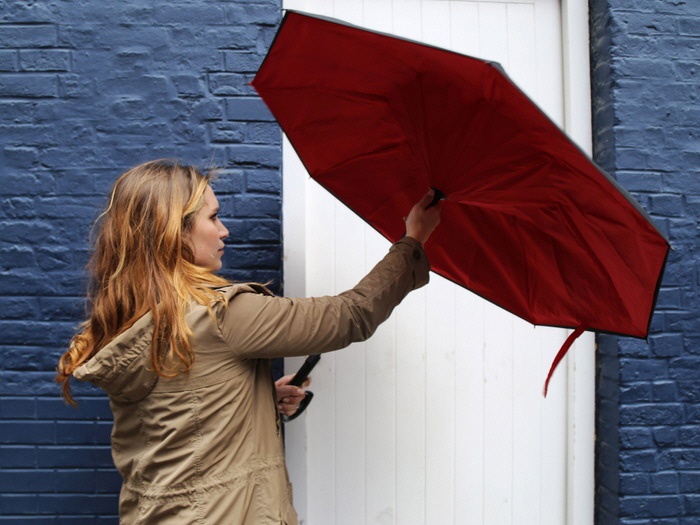 From 2012 to 2015, the family worked with 3D-printing facilities to prototype and test their designs, eventually bringing those final prototypes to China for manufacturing. For the final model, the shaft of the KAZbrella is constructed from an aircraft-grade aluminum, with lightweight fiberglass used for the spokes. In addition to the patented pulley-and-string system, Riann Kazim says, "There is another patent on the tensioning system of the canopy which allows the diameter of the canopy to be variable." 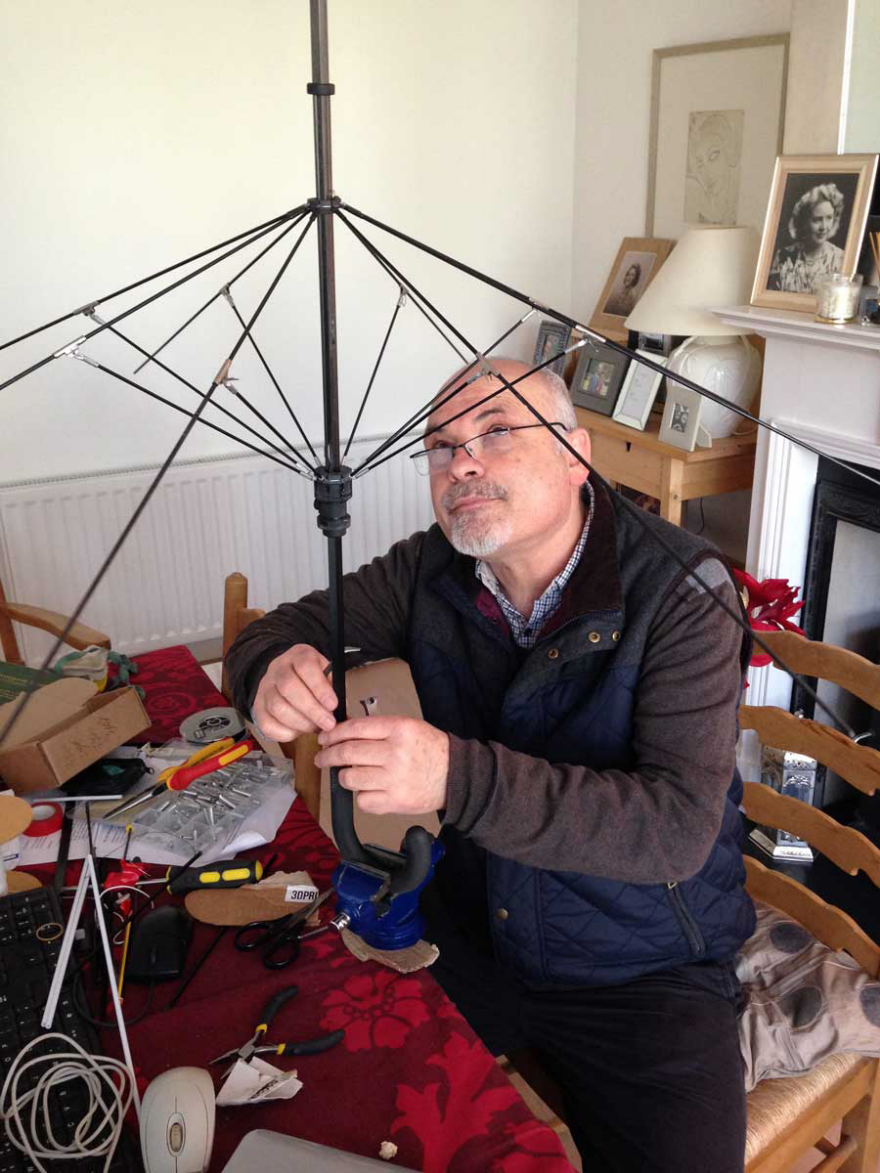 Admittedly, the Kazims are not the only ones to attempt an inside-out umbrella. The Japanese company Unbrella has already released a similarly functioning product—but in that design, the umbrella structure ends up on top of the canopy, giving the Unbrella an unusual look that may not appeal to traditionalists. Getting the KAZbrella to look like a normal umbrella was not easy. "The biggest technical challenge was to make the KAZbrella retain the look and usability of a conventional umbrella whilst inverting inside out," Riann Kazim says. "It would have been much simpler to bring out a gimmicky inverted umbrella that did not retain the umbrella look, but that wasn't good enough."

The other issue is what happens to the water droplets on the KAZbrella once it's collapsed. If you watch the video demo above, you'll see that Jenan Kazim twists and seals his KAZbrella as he walks inside, preventing any water from dripping on the floor (no doubt to his mother-in-law's great joy). Of course, that means that some water remains trapped inside, creating what would seem like the perfect conditions for mold. But the Kazims say that their use of a breathable synthetic fabric with a hydrophobic coating causes most water to roll off the canopy rather than being absorbed into the material—i.e. that there's not that much water trapped inside to begin with. That said, the creators still recommend that, as with a conventional umbrella, users dry off the KAZbrella after use, once they've gotten it to a convenient location.

Looking back on the development of the KAZbrella, the Kazims believe that the biggest hurdle of all—even more than maintaining the look of a conventional umbrella—has been Jenan Kazim having to balance his career as an engineer with the development of the KAZbrella. The inventor hopes that with the success of the Kickstarter campaign—which has already surpassed its $38,000 fundraising goal with almost a month still to go—he will be able to work on the KAZbrella full-time in the near future.