A Preview of Tribeca Design District

Those of you visiting for NYCxDesign may have noticed, as New Yorkers surely have, that iOS autocorrects "tribeca" to the rather more awkward "TriBeCa"; neither abbreviation nor portmanteau, the unusual capitalization connotes its coinage. The neighborhood may be Below Canal, but it's shaped more like a trapezoid than a triangle; perhaps "Trabeca" just doesn't quite have the same ring to it (then again, tourists will mispronounce "How-ston," but everyone knows "So-HO"). Prescriptive keyboard notwithstanding, Tribeca is known for its eponymous Film Festival and a Jay Z line or two: Surely you've caught a glimpse of the neighborhood from his and Beyoncé's balcony in the "7/11" music video or in an establishing shot in any given Casey Neistat short — or, of course, in any of the films that have been shot in the vicinity (Ghostbusters, for one).

As of this week, this wedge of the Manhattan, f.k.a. the Lower West Side, will assume yet another designation as the Tribeca Design District — thanks largely to a colonizer, of sorts, who is looking to codify the neighborhood's status as a bona fide design destination. 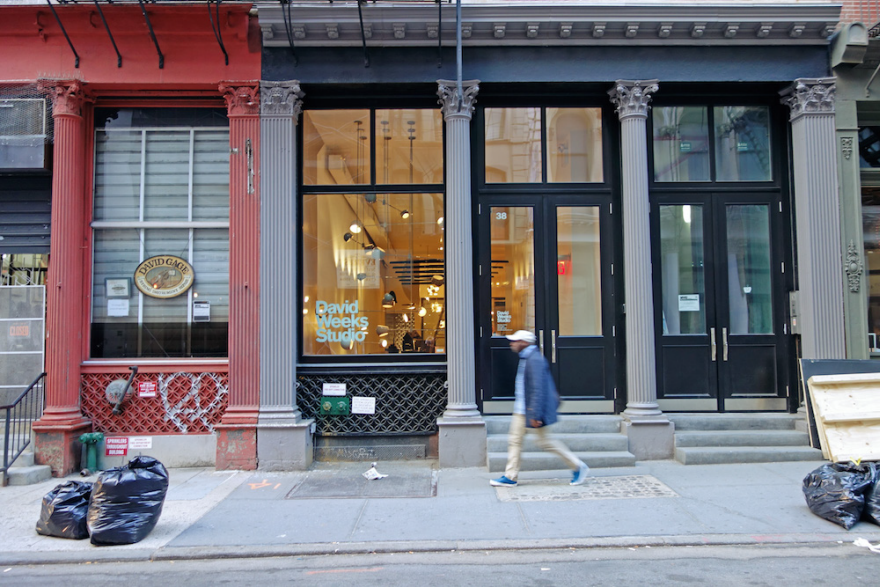 The initiative finds its origins in a conversation last summer, over lunch, between then-new kid on the block Jean Lin and David Weeks, a Brooklyn-based veteran designer who'd expanded his eponymous studio to a storefront on Walker Street in October 2013. A writer and sometime designer/retailer by training and trade, Lin had first established herself as a community-builder through a charity auction in the wake of Hurricane Sandy, for which she rallied local designers to donate their work, with proceeds going to relief efforts. Reclaim, as it was known, returned six months later as a group show during the first annual NYCxDesign festival in 2013; a third edition marked the inaugural exhibition at her permanent showroom during NYCxDesign last year. Based in Tribeca, Lin is the proprietor of Colony — a design co-op, one year old as of this week — on the second floor of 324 Canal Street, where a new edition of Reclaim will be on view this weekend, alongside work from Moving Mountains, KWH, Hiroko Takeda, and VIDIVIXI, among others.

"David came to our exhibit last year," says Lin. "He was really nice... we were talking about the neighborhood and we thought of the idea." Initially conceived as a semi-regular art crawl — think Chelsea, the first Thursday after Labor Day — the event series was pushed back to the point that it simply made more sense just to launch during NYCxDesign in May. "We're still going to do that; we want to have group openings and stuff like that throughout the year." For now, though, the festivities kick off tonight, May 14, Tribeca Design Night, at over 20 participating galleries and showrooms, including UHURU (who are opening their first showroom, on White Street), Shinola, Best Made, Schoolhouse Electric, Espasso, Property, Stillfried Wien, and Double Knot, to name a few.

Eclectic though the mix may be, all of the galleries, showrooms, and dealers largely cater to high-end clientele from near and far. Although Tribeca is generally known as one of the most expensive property in Manhattan (and, by extension, the country), commercial space has remained remarkably affordable for independent showrooms looking to stay in the orbit of Soho without the overhead. For Weeks, it's all upside: "I like the understated aspect of Tribeca, and the scale of the spaces... There's plenty of money and people here, but it doesn't have the Soho vibe." 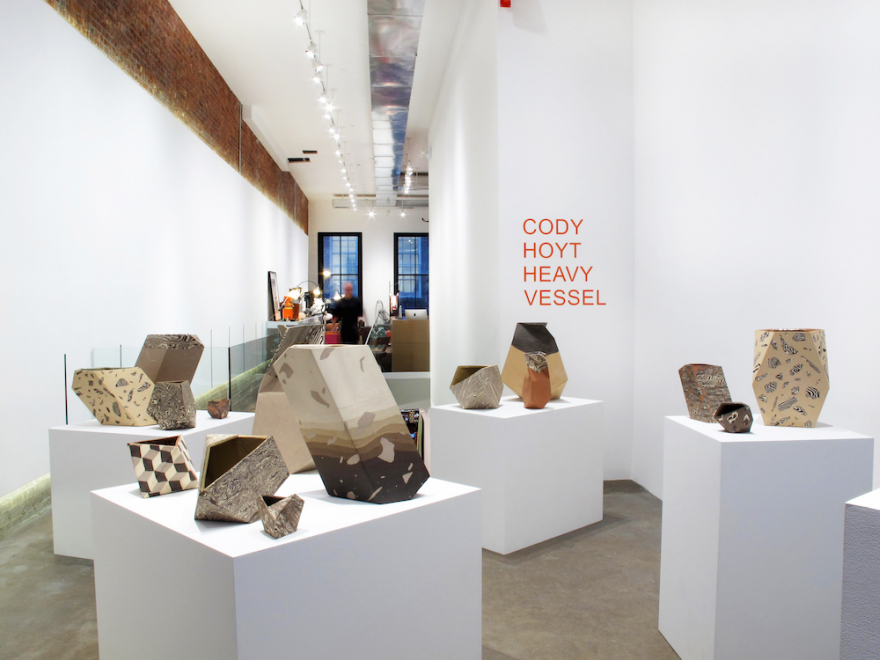 Nevertheless, the proximity offers the best of both worlds, as design-seekers working their way down from Houston increasingly find themselves crossing the border into Tribeca. Gallerist Patrick Parrish, among the first to move to Tribeca in the early 2000's, noted that "There's always been design here, but it seems this little tip of Tribeca, was ignored for lots of reasons." He's referring to the northeast corner of the neighborhood — the nexus of Soho and Chinatown — where he relocated last year, after a ten-year run on Duane Park. "That part of Tribeca has changed a lot."

Just as Weeks cites his former employer Ted Muehling as a kind of pioneer — on Greene St, in Soho, then Kenmare, and now White — Parrish recalls seeing his previous Duane Street space for rent when he was walking home from an opening at R&Company (then known as R20th Century); founders Zesty Meyers and Evan Snyderman are veritable elder statesmen in the neighborhood. Paul Donzallo is also widely cited as a trailblazer in the pre-Design District days, having established his eponymous gallery in 1997; like Parrish and R&Company, Donzallo is exhibiting at the concurrent Collective Design Fair. (Best described as a well-edited version of DesignMiami/, the third incarnation of this tentpole event of NYCxDesign is as far downtown as it's ever been, just a few blocks north of Tribeca, across the Gordian scrum of traffic where Canal Street turns into the Holland Tunnel.) 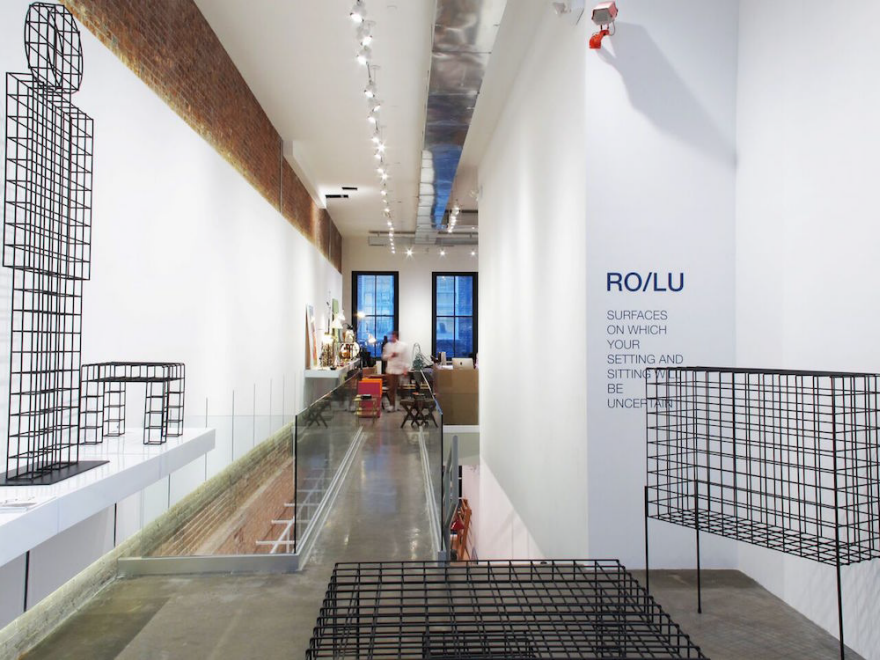 Now, with upwards of two dozen permanent galleries and showrooms in the vicinity and counting, Lin is determined to bridge the generation gap with geographic concentration. But it's not so much a case of a tipping point or critical mass as it is a willful effort. After all, the Tribeca Design District is loosely analogous to Colony's business model as a designer co-op, which entails a delicate balance between and consensus and leadership; in both cases, it's just a matter of "organizing a bunch of people who have strong opinions." To that end, Lin forged ahead with the map and website — to overwhelmingly positive response from her compatriots — and she's paying it forward precisely because she's already gone all-in. Weeks, for his part, split the production cost, but with his retail experiment underway, he admitted that he's "a little old for the all the effort that goes into building a community… but Jean's a perfect person for that."

Indeed, Lin is felicitously positioned, in terms of both time and place, to serve as a gateway from points north. At the outset, the second-floor space was a mixed blessing for Lin: Literally across the street from Soho, the graffiti'd door and otherwise anonymous buzzer — favorably likened to a relic of a grungier era by Weeks — was a hard sell at street-level, even as Colony itself offered a refuge from the rough-and-tumble squalor of Canal Street. Thanks to word-of-mouth, though, Colony has gradually attracted more walk-ins: "A lot of the Soho shops send people here too, because people are constantly asking, 'Where else should I go?' — they want to discover things in real life."

Parrish agrees. "It's harder and harder to get people [to come] out — with the Internet, they can just stay home and shop all day long — so if there are more places for them to go, it's better for everyone." Like the other stalwarts, he expresses measured optimism about the Design District, having long witnessed the transformation of the neighborhood. "Two years ago, it looked like it was from 1989; ten years ago, it looked like it was from 1970," Parrish wryly observes. "But since I've been here, it's radically changed — there are apartments next to me that are $10 million. I feel like I got in there right at the last moment."

He continues: "The lot across from me" — where Colony is, not to mention the now-shuttered Pearl Paint — "is the original lot that was a 'Triangle Below Canal.'" It turns out that artists who had been priced out of Soho, in the early 70s, ventured south and dubbed their enclave on Lispenard the "Triangle Below Canal Block Association" — TriBeCa for short — and the name eventually came to refer to the whole neighborhood.

Now, 40 years later, with the inauguration of Tribeca Design District, the Triangle Below Canal has come full circle. For Lin, "It's saying that we believe in this neighborhood."

Tribeca Design Night is on Thursday, May 14 from 6-9PM

A Preview of Tribeca Design District