Today, Core77 is excited to launch a new biweekly column—but, first, a pop quiz for our readers: Without resorting to Google, how many 20th-century female industrial designers can you name?

We'll give you a moment to make your mental lists. When you're ready, please scroll past this portrait of General Motors' famous "Damsels of Design" . . . 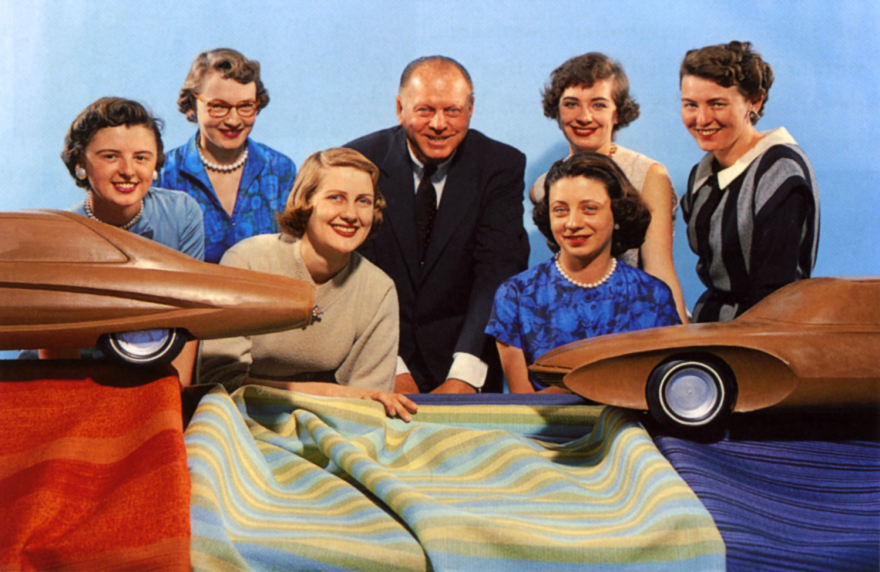 How did you do? We're hoping that most of our readers had no trouble thinking of Ray Eames, Florence Knoll, Eileen Gray, Charlotte Perriand, Eva Zeisel and perhaps a few others. But we're guessing that very few of you came up with more than six or seven names total. Not that we did a lot better ourselves—the unfortunate truth is that women designers' contributions to the field just haven't gotten much exposure and celebration over the years.

Which brings us back to our new column. Starting today, we'll be publishing a series of profiles of great 20th-century female designers by Los Angeles–based contributor Rebecca Veit. We're kicking off the series with two posts—on the pioneering Bauhaus metalworker Marianne Brandt and the American ID entrepreneur Belle Kogan—and we'll be adding a new profile every other Tuesday.

With this series—which we're somewhat cheekily calling Designing Women—we will be focusing on industrial design, but we'll also be delving into interiors, textiles, architecture, graphics and related disciplines. We'll be featuring solo designers as well as some design collaborations where men (naturally) took most of the credit for the work. (For an example of this dynamic in action, watch this painful 1956 television interview with Charles and Ray Eames; take a drink every time the host gives Charles sole credit for a design, and take two drinks every time she describes Ray as being "behind the man.")

From time to time, we will also highlight women patrons and influencers who, while not designers themselves, had a powerful impact on the design world. Occasionally, we may even pop into the 21st century to call out some great work by contemporary women designers, of which there is certainly no shortage.

In other words, we're not going to worry too much about definitions, but instead focus on showing off all the terrific design work that has been produced by women since the dawn of the ID profession. Happily, we're not the only ones pursuing this goal. Just last month, New York's Museum of Art and Design opened the exhibition Pathmakers: Women in Art, Craft and Design, Midcentury and Today, and last year's San Francisco Design Week included a Women in Industrial Design show, with stellar work by today's emerging and established female ID-ers. And there have been a few other noteworthy exhibitions on this theme in recent years.

We're glad to see so much (belated) attention being paid to women's underrepresentation in design history, and we're looking forward to doing our part to help rectify this imbalance—not just out of sense of fairness but because 20th-century female designers made a lot of seriously awesome and beautiful work.

So please keep an eye on the Designing Women channel, and, as always, let us know what you think in the comments section.