Current projects: It’s a mix of a lot of things. I’ve just come back from seeing a finished prototype for a small architectural project in Rennes, France. We’re working with a big Korean company on electronics—I can’t say which company, but in September we will launch some new products that will be quite interesting, I think. We’re also working on a carpet collection that is being done in Pakistan in a kilim technique. So we’ve got a very broad interest around the question of the object.

Mission: Well, I think this world is quite ugly and very often badly conceived. So I think the mission of the designer is to fight against that. The problem is that now design is becoming an adjective—so we speak of a “design chair” or a “design kettle,” and often when this adjective is used it’s for an object that is totally wrong. These “design” objects are a caricature of what they could or should be. So the mission is to find new solutions, to find a way to invent a new aesthetic, a new balance, a new elegance. 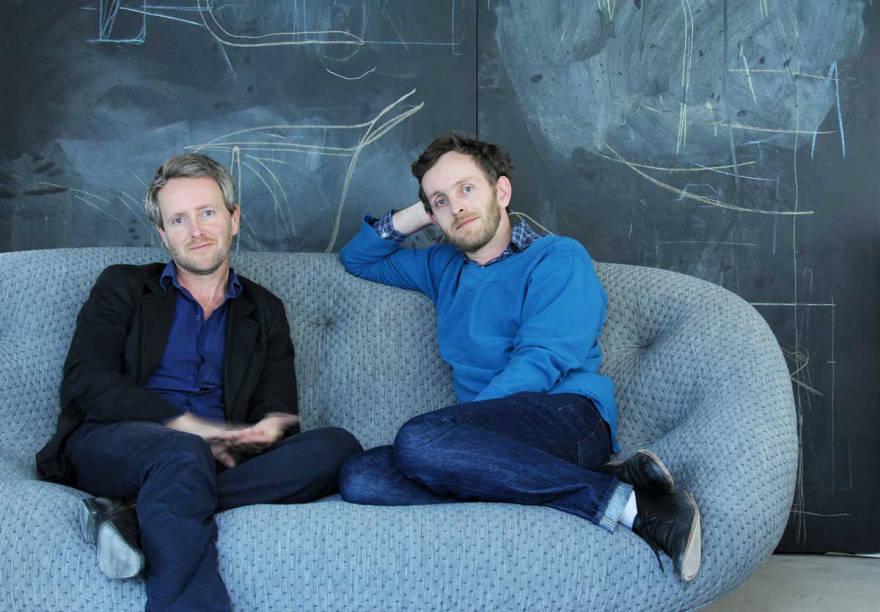 When did you decide that you wanted to be a designer? When I was 15 it was very clear for me. Since then, I’ve felt that I entered a train and this train has never stopped. I started very early, so I feel like a very old designer now.

Education: When I was 15, I entered art school. I was very bad at school, but there I came to be good. Then, when I was 20, I entered industrial design school, but a terrible one, in Paris. And I was again a bad student, because I never understood what they wanted or what they thought about industrial objects. It had terrible professors, a terrible idiot approach to things. I did graduate, but at the lowest level possible. But when I look back now, I think it was a very important moment in my life. I didn’t exactly understand why I didn’t trust them or why their idea about objects was wrong, so I had to build my own approach. And I realized very quickly that I wanted to do my own thing, so in parallel with school I started to participate in exhibitions and have small editions of pieces. 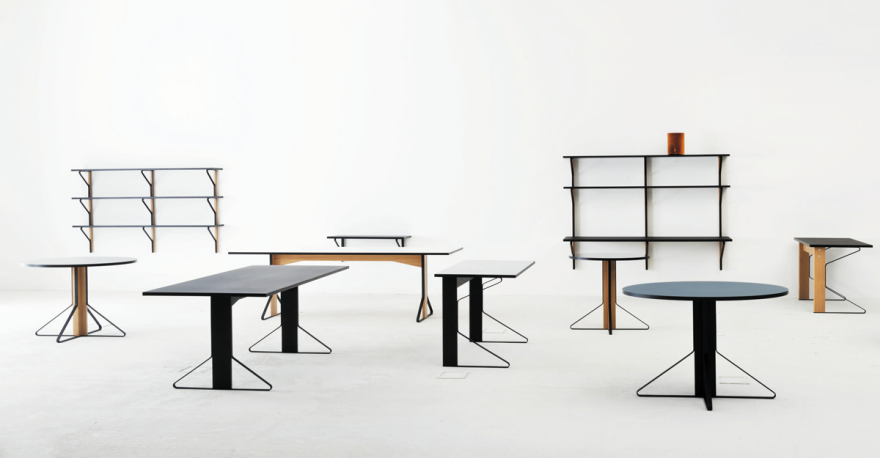 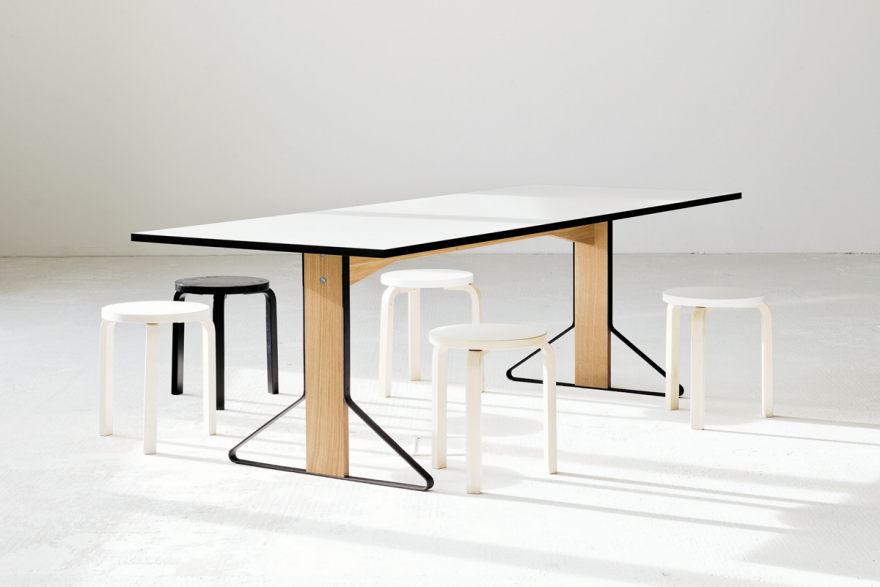 Called Kaari, the Artek collection includes a round table, a rectangular table (pictured), a desk, a wall console and wall-mounted shelves.

First design job: I’ve never worked for anyone. It was very clear to me that I wanted to work for myself.

Who is your design hero? I have many. If I spoke about the 1950s, it’s between Sori Yanagi, Jean Prouvé, Charlotte Perriand and all the American ones, from Nelson to Eames. They’re all very important to me. But then there’s the Italian avant-garde of the 1970s, from Sottsass to Andrea Branzi. When I was a young designer, I felt a lot of interest in Jasper Morrison’s work. And probably the most achieved designer of this period, for me, is Jonathan Ive. 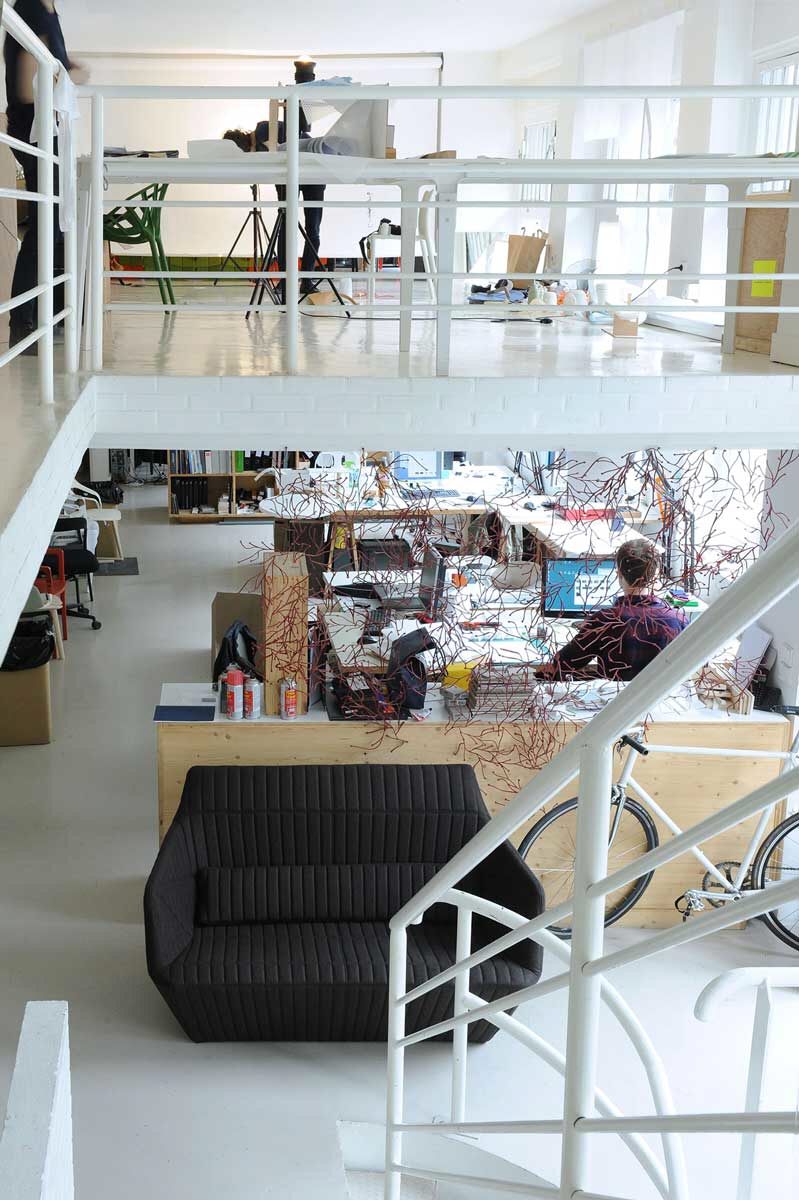 The Bouroullecs' studio in Paris

Describe your workspace: It’s a mess. It’s a sort of atelier, divided into three levels. In the basement, there are a lot of machines and the possibility of doing very quick mockups or prototypes. On the first level, it’s tables and computers and a lot of paper—and all the prototypes, when they’re finished in the basement, they arrive on the first floor, so it’s full of cardboard, metal, wood prototypes everywhere. It’s full of dust and paper and tape; it’s a very dirty place that I like a lot. I want it exactly like that; I don’t want to have it clear. I want to be surrounded by ideas and to have them under my eyes.

The third floor is a bit quieter. It’s a sort of archive of drawings, and then a photo studio. After we do a project, we do our own pictures of the project, and we might do a book or something like that. The third level is more linked to how to finish the design projects through pictures.

Other than the computer, what is your most important tool? My brain? I don’t use the computer so much, except for communication. I don’t use 3D printers. But I’ve got assistants that do those things. More and more—and this is the situation of being an old designer—I’m finding that I can build a lot of projects mentally. I don’t especially need to draw them before. When I was a young designer, it was very important to repeat the drawing, exactly like a dancer or a pianist practices repeating something to be able to understand it. After 20 years of work, I have repeated in my mind a lot of form, a lot of aspects. So I can, more and more, instinctively build in my head a picture of something. It’s less important to draw everything to understand it.

What is the best part of your job? To do a good project is very complicated. I like that. I like the difficulty of it. From the first picture to the very end, we have to be extremely hard on ourselves to produce something interesting. The problem—and probably a part of the pleasure—is I’m never satisfied. But I like to fight with myself, to never be satisfied and to search and search.

What is the worst part of your job? We work on all the different aspects of a project, from the project itself to the way it’s shown to the way it’s photographed. But this control is something that is impossible at a certain level—at the level of distribution, for example. When I see some of our pieces in shops or when I see the way the company is showing them, sometimes I’m totally desolate. 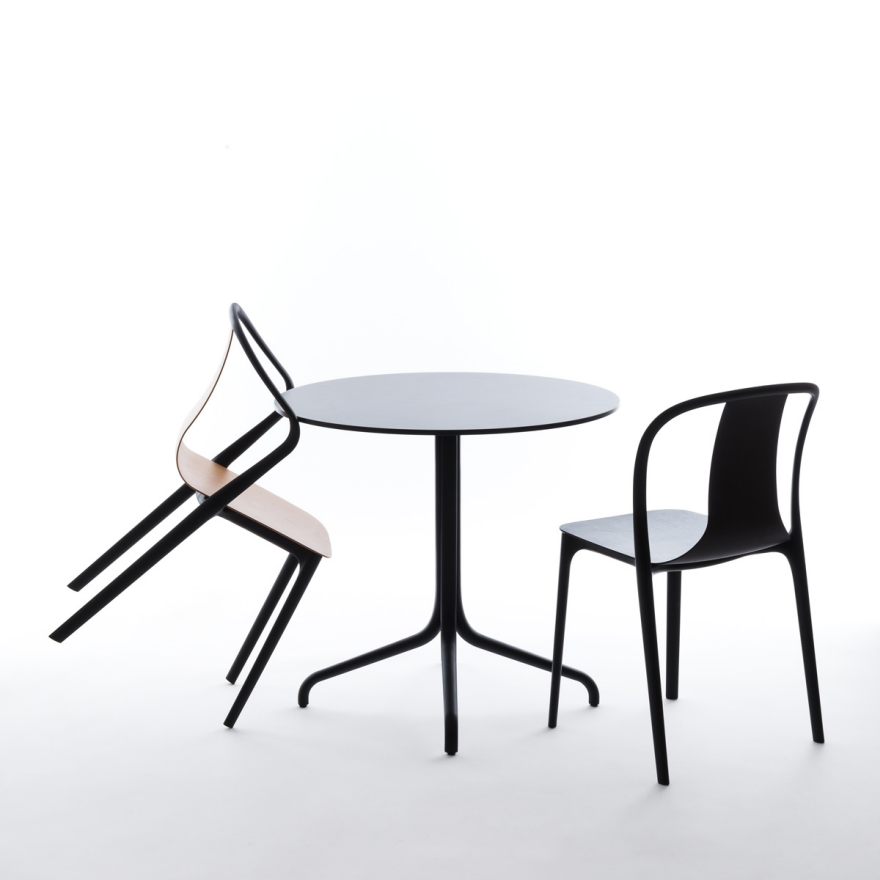 The Belleville collection for Vitra, launched in Milan last month 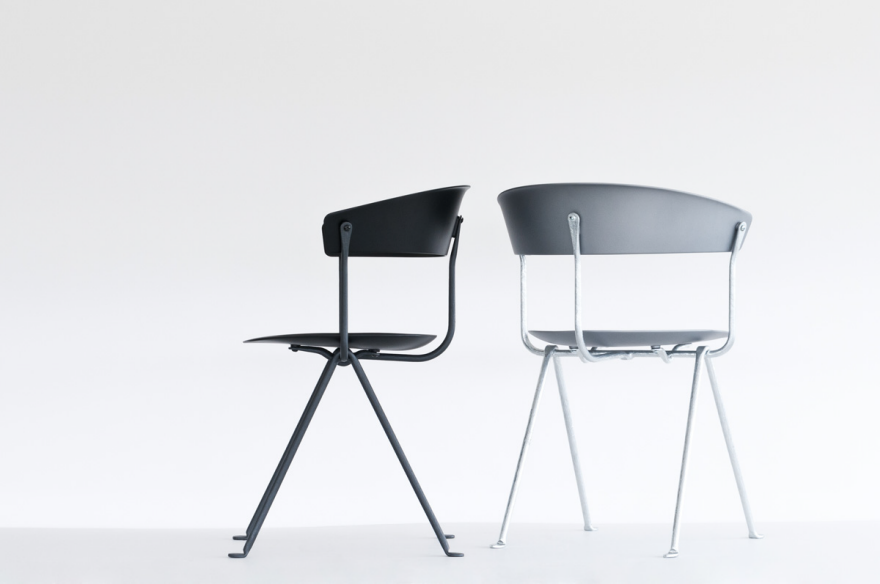 Also from the Salone Milan, the Officina chair for Magis, with a wrought-iron base and injected-plastic shell

What time do you get up and go to bed? I have a lot of problems waking up, but I try to wake up for my daughter at 8:00, to discuss with her in the morning. And then I’ll often go to bed around midnight. I need to sleep.

How do you procrastinate? I compulsively look on the Internet on some idiotic subject, like real estate, for example. I like to see houses and to see how much they cost. I don’t buy anything, but I spend hours and hours searching for something near the coast or . . . Actually, I’ve probably found one, after years and years of research. It’s in Brittany, which is the part of the country I come from; it’s an old house from the 19th century, built on rocks in front of the ocean. Very, very modest but very interesting.

To do a good project is very complicated. I like that. I like the difficulty of it. From the first picture to the very end, we have to be extremely hard on ourselves to produce something interesting.

What is your favorite productivity tip or trick? I have noticed that the good ideas often appear when I’m extremely tired. Part of the value of being a young designer is to be naïve—you’ve got a certain freshness, in a way. Specialists know too much about things, and in general they miss the important distance that is needed to find something new or different. So now that I’m not naïve anymore, the fact of being tired helps me to build the project in another way.

Also, we are working on a lot of projects at the same time, and I’ve noticed that when I need to finish a project because it’s the deadline, it’s very often at this exact moment that I find the answer to another project. Because when you concentrate too much on something, it can be impossible to have the power of finding something interesting. I’m not romantic at all when I say this, but I think a good project is something a bit magical. A good project is not just the addition of facts which are perfectly answered. If you take the important icons of the 20th and 21st century, for example—almost all of them have got a big problem inside the object itself, and that’s why it’s so particular, that’s why it’s different, that’s why it has a specific charm, because it’s exactly like a person. Perfection is not interesting. Charm is something that is very complex to find and to build. 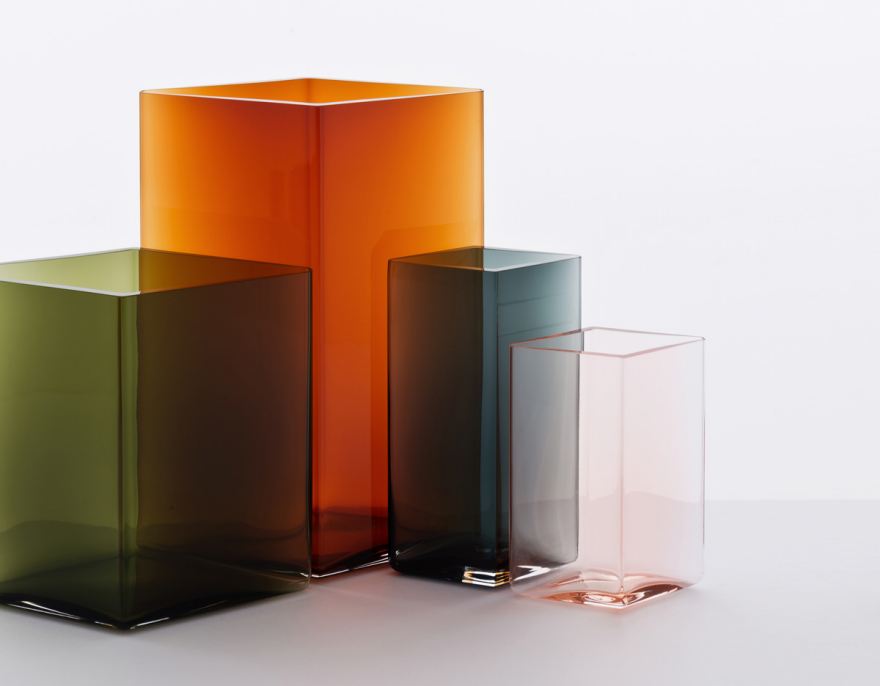 What is the most important quality in a designer? To be modest. Design is a very generic discipline. You have to work one day with plastic, and the day after with wood, and then ceramics, and then try to invent a new way of stitching or a new way of welding. It means that you are a specialist of nothing—but you have to work with specialists. So the most important thing is to be modest and to have a lot of empathy. 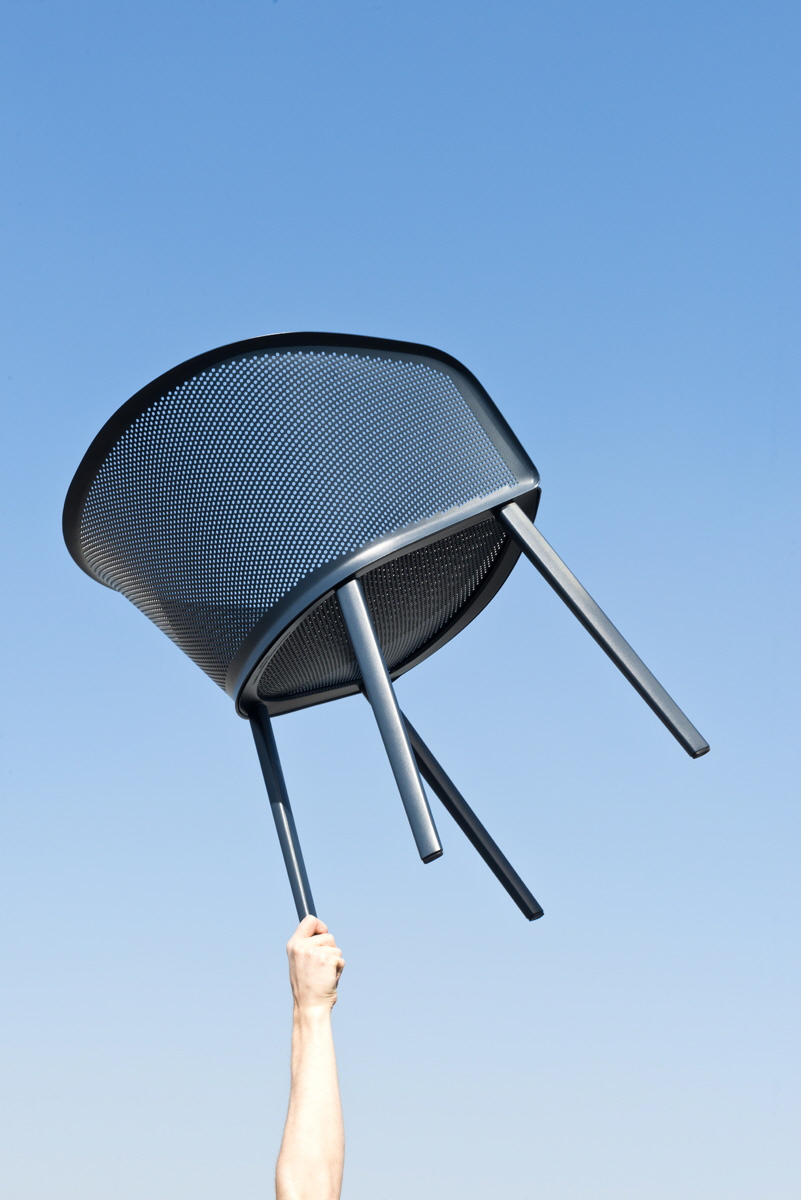 What is the most widespread misunderstanding about design or designers? In France, designers are considered as sort of artists. Industrial people do not understand what a designer really is. They think it’s someone who can do a good drawing or have a good idea, and then from that drawing or idea they think, “OK, I’ll work alone.” But a designer is someone who has to be totally integrated from the beginning to the end in the entire process.

What is your most prized design possession? I’m not a collector at all, and I’m not so much surrounded by design objects. I’m not a fetishist. But I just bought two Aalto tables from Artek that were used in the cafeteria for Helsinki University. So there is chewing gum stuck under the table and all of that. I like them a lot.

What is exciting you in design right now? The fact of how fast it is to do something and then photograph it and then put it on a website so it is everywhere. I’m fascinated by the quantity of things that you can see everyday—this relation between things that are permanently invented and seeing all of that on a screen. I come from another period, when it took a very long time to share a project with everybody, and you could only share it if it was in collaboration with a good company that was able to communicate. Now a student could do something in his small room and photograph it and publish it. But I’m not so amazed at the quality of what I see. I think the global quality is better—the medium level. But I’m not so surprised by the new generation, for example.

If you could redesign anything, what would you choose? First of all, for me, there is no hierarchy of things. I’m extremely happy to do the chandelier at the entrance of the castle at Versailles, which we designed two years ago—but at the same time, to do a low-cost, basic chair for a café or terrace. For me, both of them are extremely difficult.