Even as the third annual NYCxDesign festival sees more group exhibitions than ever, it is the permanent showrooms and galleries that have the luxury—and challenge—of trying a different approach. This year, David Alhadeff of The Future Perfect managed to pull off a standout show precisely by focusing on a single designer, Piet Hein Eek, who transformed the Noho storefront into a "Wonder Room."

We had a chance to catch up with Alhadeff and Hein Eek and asked them to share the story behind "Wonder Room" in their own words. 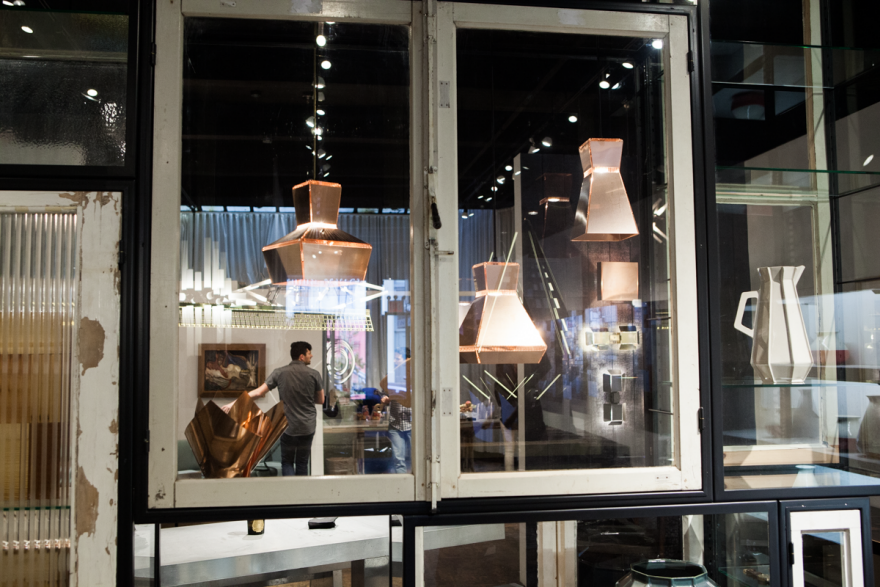 David Alhadeff: I met Piet many years ago—I've been familiar with his work for pretty much as long as I've been in the industry and I've always really been huge fan of what he's done. About four years ago, we became the North American representative for his work and, ever since then, I've wanted to do a show with him. In my experience with Piet, he's not one of these guys who jumps at a show for the sake of a show; he's a little more humble than that. The way he explained it to me is that he does one show every year—with Rossana Orlandi, in Milan—and it's a show of what he did that year. In fact, I think Piet is an industrial designer in the truest sense: Although the work that he makes is very artful and oftentimes one-of-a-kind, he doesn't arbitrarily attribute limited-edition or one-of-a-kindness to his work for the sake of making it more artful, if that makes sense. Anyway, the conversation about his show had been going on for some time, and in October of last year, I visited his Eindhoven studio during Dutch Design Week. It's an amazing place—really, really beautiful—and I came out, and we were talking about the show. He'd installed something brand new for him, on his fourth floor (it's a huge space), and it was called "Wonder Room."

Piet Hein Eek: The "Wonder Room" back in Eindhoven is quite extensive. It was a response to the fact that we had two gallery floors of 500 square meters, which were very expensive to keep changing. Meanwhile, we had all this art made in collaboration with various artists, which needed a dedicated space. I decided to change one floor into a permanent exhibition for all that work and create a domestic feeling with a living area and kitchen on the other. Two weeks before we opened, I decided that it would make for a perfect dining experience so all of a sudden we built out a commercial plan—which was not the plan—and made it a private restaurant. 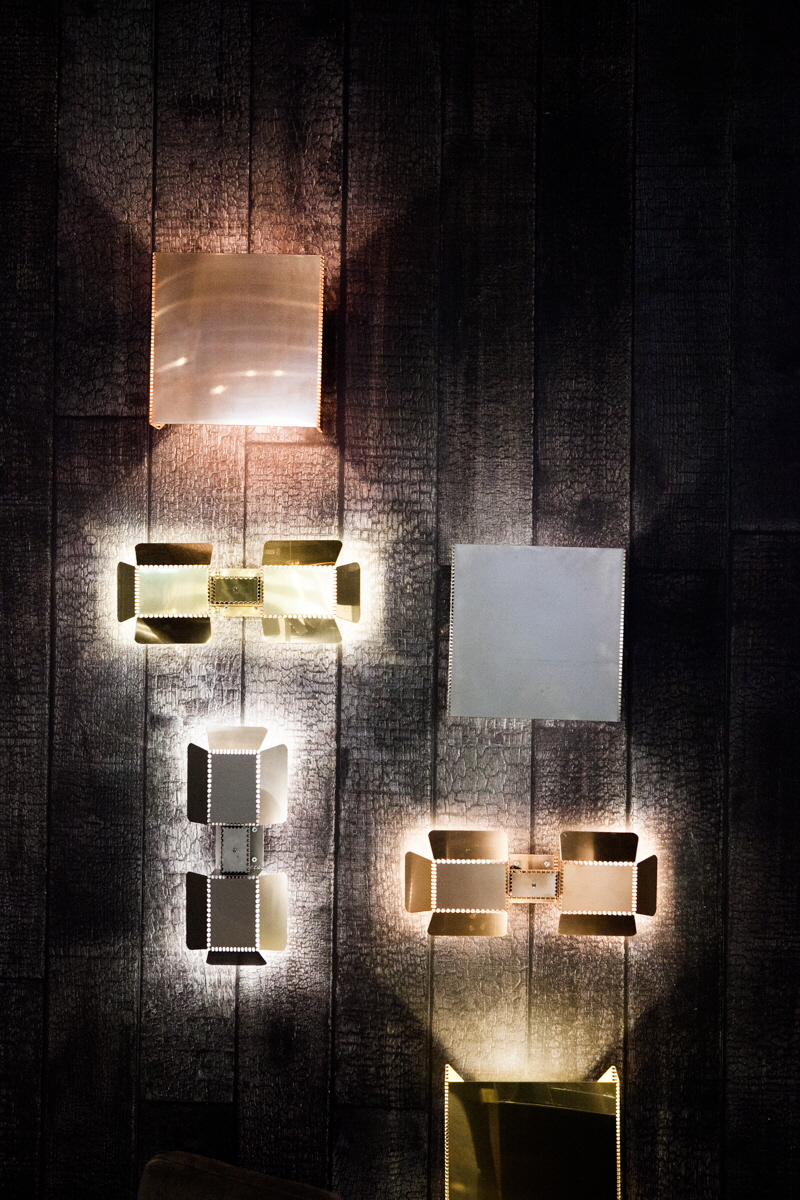 DA: You could tell, the moment you walked in the door, that the idea of "Wonder Room," was a little bit less serious than everything else. The manufacturing is very clear, it's where they're making stuff, that's very serious; the retail is very serious, it's about selling things. But "Wonder Room" is an environment that's a little bit about collaboration, a little bit about experimentation—it was an environment to show off his curation in other areas of interest, such as fine arts, and his take on what's going on in the young design community, and other angles of design. I walked in and thought, "This is a great idea," and he looked at me and he was like, "Yes—Wonder Room New York! Good idea!"

PHE: We had to export the idea to New York and also translate it, so, unfortunately, it was impossible to make a kitchen, although it would have been fun. The concept of the "Wonder Room" is that we bring together a lot of different disciplines and create a context around our work. It is more than only a table or a chair, but also a collaboration with artists and vintage pieces. In the end, it was about bringing together those collaborations and showing a variety of all the things we do, so we have a series of products specifically from designers and artists that we represent or work we made together.

PHE: My most recent project are the busts, which are made of rubbish. We have all these leftover projects and the material is worth a fortune, so for the Leftover Project, I turn it around and acted as if labor was nothing and material were worth a fortune—like it will be in the future because mankind is growing and resources are decreasing. 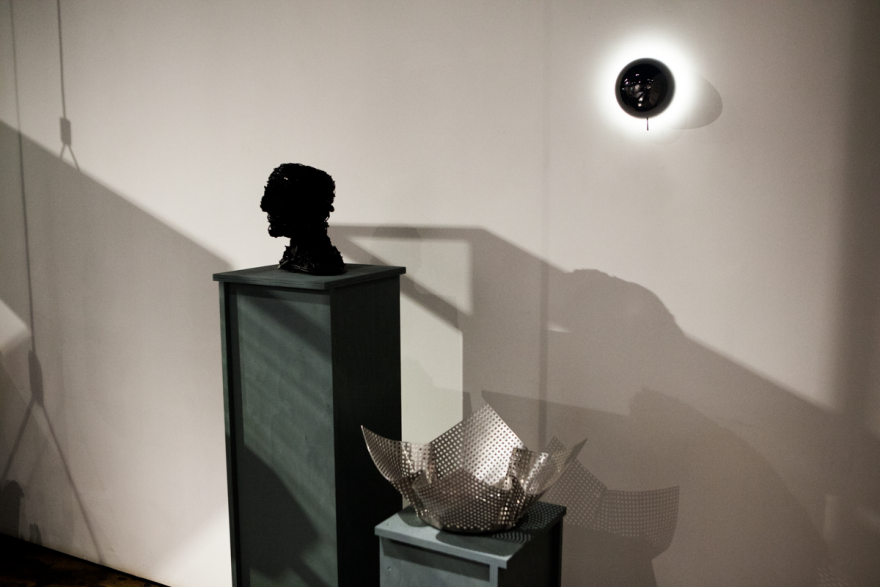 Respect for the material is one of the essential things in my work. I had been wanting to make busts for a long time, which is one of the most classic themes in art, but from rubbish, so if you're able to do that, you create the biggest increase in value possible. It's the game I always play, but very extreme.

One of them is made from chargers I took from a drawer at home, which were without use. Everybody recognizes the fact that there are thousands of chargers somewhere in a drawer you never use, so it's very much about us creating rubbish because we consume like idiots. It really confronts you with the amount of rubbish you create.

DA: In addition, we have some strong collaborations that [Piet's] done, both with designers in our community, as well as fine artists. A good example of that is the work of Marc Mulders, who is a very well-known Dutch fine artist, that we have some work that he and Piet worked on together. 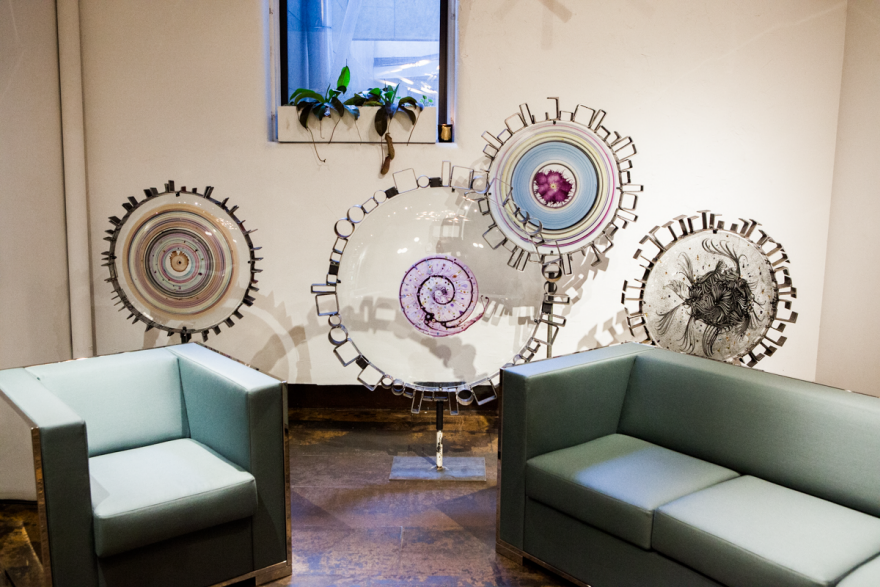 PHE: [Marc] is one of the most successful and influential painters in Holland. He lived abroad for 10 or 15 years in New York, but had an issue with the art scene because it was only about money. He was more about creating things and the work itself, so he just quit.

The collaboration is quite nice, because he's a long-time friend. We've made a lot of projects together in which I normally solve certain problems. In this case it really comes together much more. The old construction steel I welded is all reclaimed, and he provided the glass pieces that fit inside.

DA: We also have some work from young designers like Paul Heijnen, who made the cabinet here. Piet really feels that Paul is the next great Dutch talent to emerge, so it's exciting to show that. 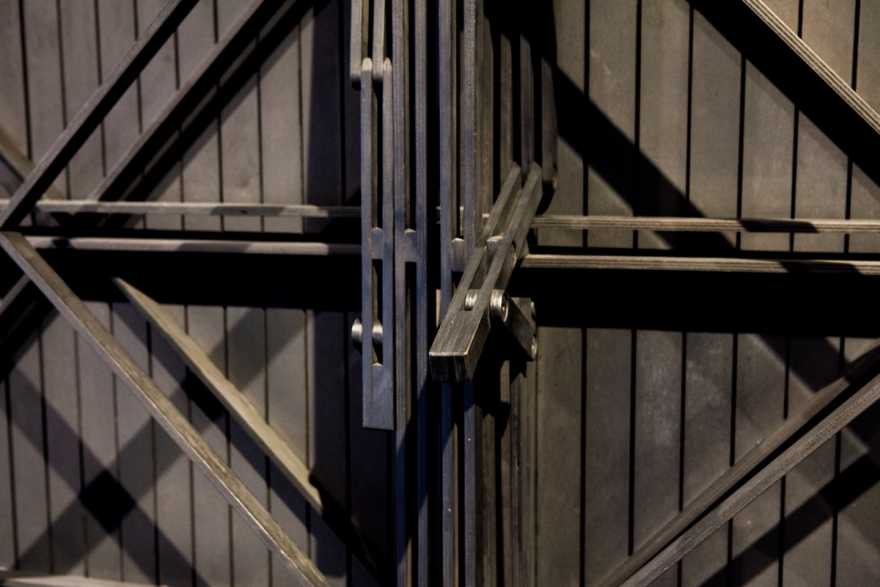 One of the things I know about Piet is that he's much more than just a designer: he's a very good businessman, he's a curator, he's a shop owner, and he's also a very strong designer. When he puts on the hat of "curator," he really is an inspirer of great work from other people—it's really interesting to see. I wanted this show to be a display of all of that. 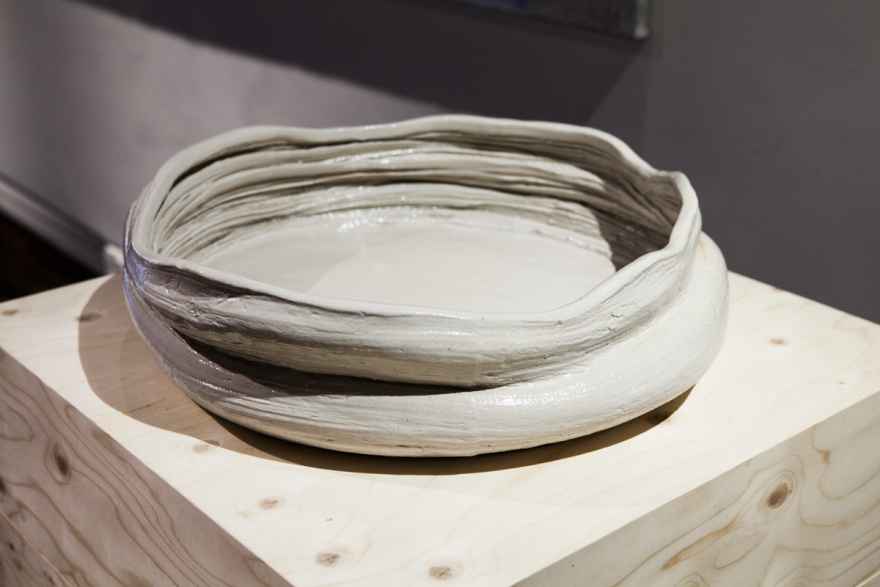 PHE: Half year ago, I ran into another artist, Floris Wubben, at the design fair in Eindhoven and he had a beautiful machine helping him throw bowls on a wheel, so we stared talking. Over the course of the conversation, we invented an entirely new machine. That machine extrudes clay as a way to create bowls. We built it and the results of this small conversation are on display here.

Then we have the work of Hansje van Halem, who is a graphic designer in Holland, but she's more an artist than graphic designer. I asked her if she would like to have an exhibition and then she said, "But I'm not an artist." I said, "Well, I don't know about that." Apparently, she gets the question very often and was annoyed by it, but we sat down and worked on a series of new pieces that bridged the gap [between art and design]. We made a huge exhibition and printed all her designs like wallpapers. It was very beautiful. We also selected a part of her work to be framed and shown because the work itself is very strong. That's what we have on display here today. 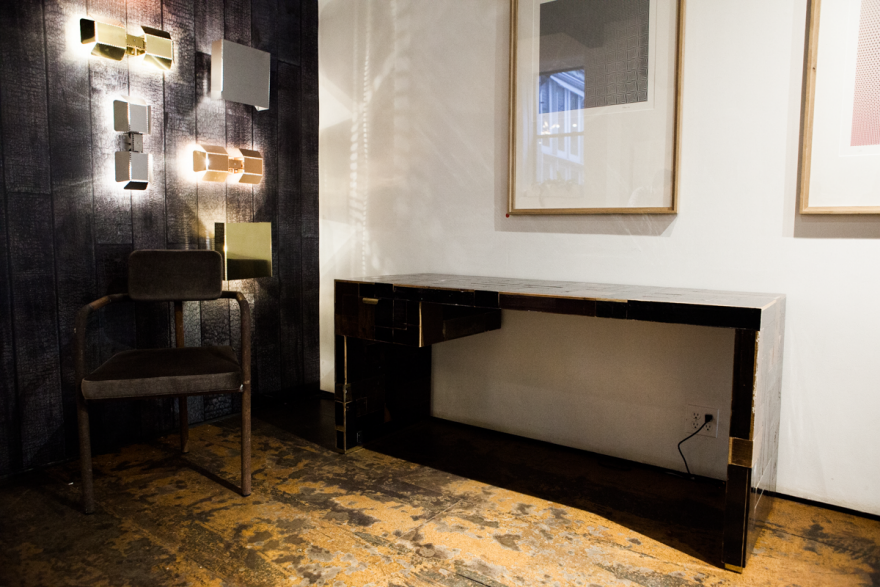 The flowers are work by Linda Nieuwstad. She makes these huge bouquets of flowers for hospitals, 7 meters high. I suggested that we make something a bit smaller, you know, for people who don't have a hallway 6–7 meters high. We decided to make her work a little bit smaller to make it also accessible for normal people—not even about the price, but just the size. We initially thought to make a flower stand with vases and flowers, but we ended up making metal vases for her flowers. The flowers are made up of fabrics and all types, and a lot was recycled. 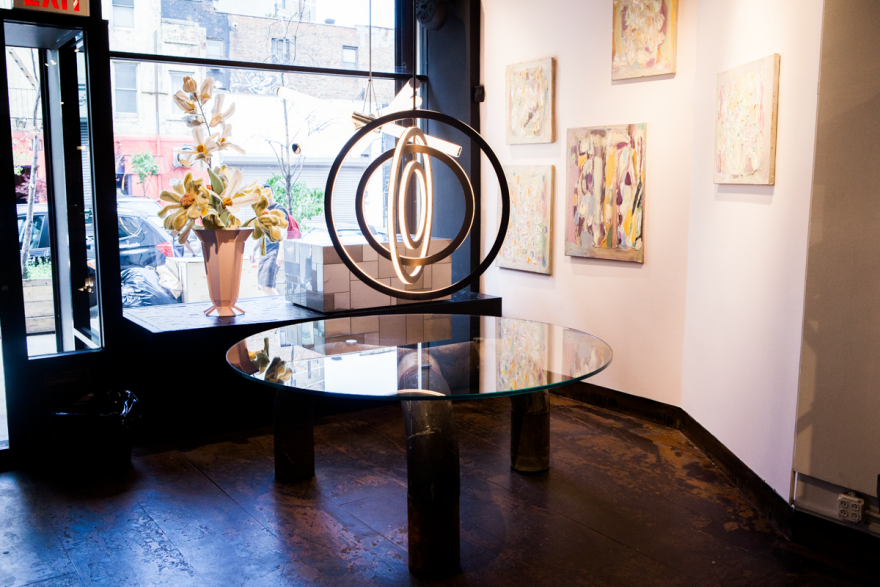 Floral arrangement by Linda Nieuwstad in the window of The Future Perfect. Halo Chandelier by Paul Loebach for Roll & Hill. Table by Piet Hein Eek.

DA: One of the things I know about Piet is that he's much more than just a designer: he's a very good businessman, he's a curator, he's a shop owner, and he's also a very strong designer. When he puts on the hat of "curator," he really is an inspirer of great work from other people—it's really interesting to see. I wanted this show to be a display of all of that.

Finally, as it came together, we decided to layer in a New-Yorkness, if you will, which we did through the lighting. Because Piet is a huge fan of what's going on right now in brand new lighting, and I think also agrees that New York is kind of at the cutting edge of this. So he was like, "Look, let's take my new lighting, and we'll show that, and then we'll also show this amazing talent that's happening in New York."

It's great—he curated each of the pieces; he selected the finishes and we worked together on the placement of them. You can see that he really put his thumbprint on the lighting pieces, like the way that this "Halo" goes with the rag-pipe table. They're really quite suited to each other.

It's New York meets The Netherlands—"Wonder Room" comes to the Future Perfect. 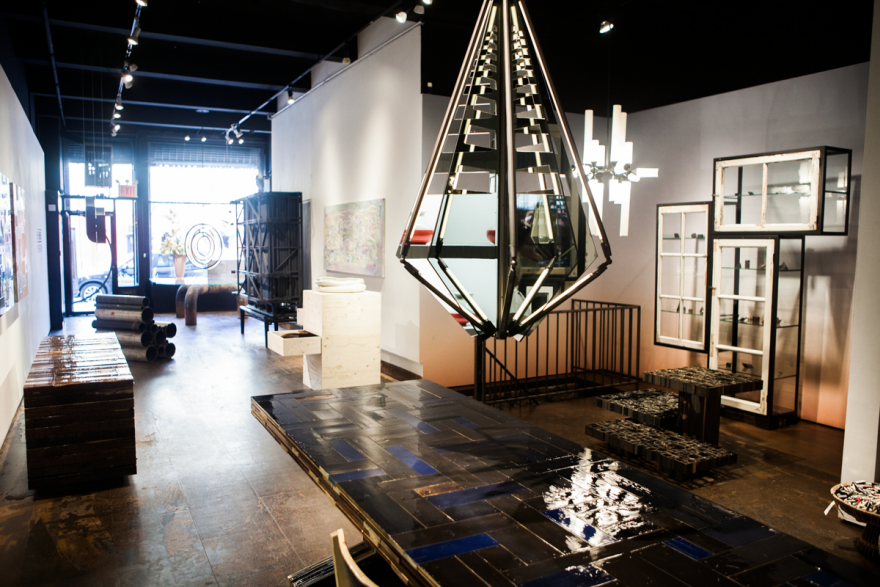 The "Wonder Room" is on view through June 20th at The Future Perfect, 55 Great Jones St, New York City.

Transcript edited for length and clarity by Ray Hu and Carly Ayres. 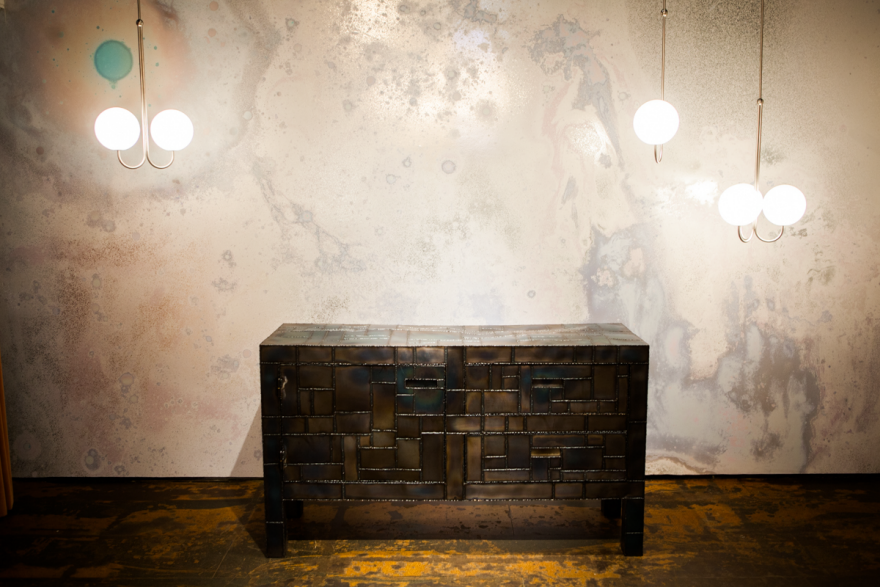