JO: Most of them are confidential, but right now we have projects that span emerging technology, architecture, furniture and product—so a complete scope of all types and scales of creative endeavor.

JO: Generally, I would say it's to create new archetypes and modes of use for things, the only way to justify the existence of new objects. 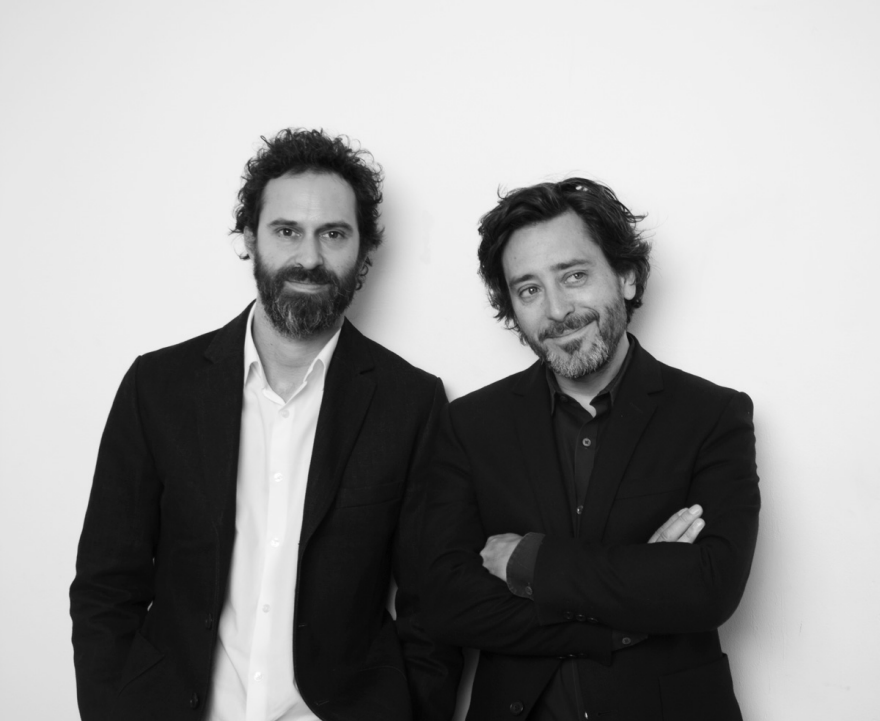 JO: Well, as I child I knew I wanted to do something creative, but I didn't understand or know the term designer until I was older. And it was only then that I decided to go in this direction.

EB: I'm not sure I ever decided. I just fell into it, really. I thought I was going to be an artist or a sculptor, and then one day I got very practical and signed up for a design course. But I imagine that I will probably end up not being a designer at some point.

JO: I did a one-year foundation course in art and design, followed by a degree in furniture and industrial design at Ravensbourne College of Design and Communication. After that, I went to the Royal College of Art, where I studied architecture for my master's degree and met Edward.

EB: I did a design degree at Leeds Polytechnic, and then I also did a master's in architecture at the RCA, where Jay and I met. 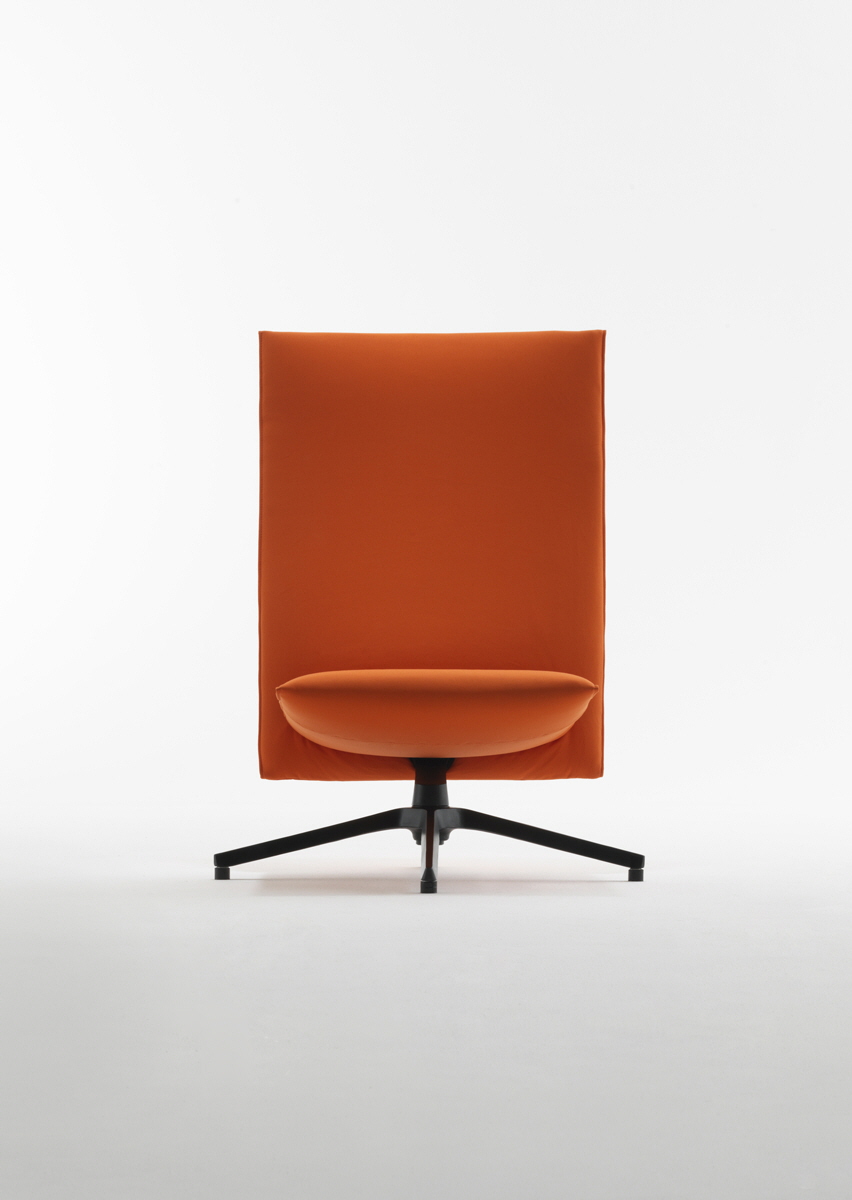 EB: Same answer. I was never actually employed as a designer by anyone, partly because I was probably unemployable. Jay and I were actually offered a job by one of the tutors at the Royal College of Art, but that never materialized. And while we were waiting for the job to start, we decided to work together. So, yeah, I've never had a job other than my own office.

Who is your design hero?

JO: Probably Christopher Dresser. He was one of the first people to actually practice what we today call industrial design, which was trying to give the companies that were emerging from the industrial revolution a competitive edge through creativity and starting to understand and synthesize design language to give meaning to objects which were otherwise merely mass-produced items. He was influenced by the Orient and by Japan in particular, and really brought in some of the sensibilities of the East, of a reductive design language. He was incredibly prolific and he remains a huge influence.

EB: Design heroes for me are people who are unnamed, really—people who made everyday household objects from wood and metal. You know, those things that you find in flea markets. Or even going back beyond that. If you look at simple wood-carved seats and bowls and things from 150 to 200 years ago, from Africa or Polynesia or someplace like that—things that have been design-developed through time. 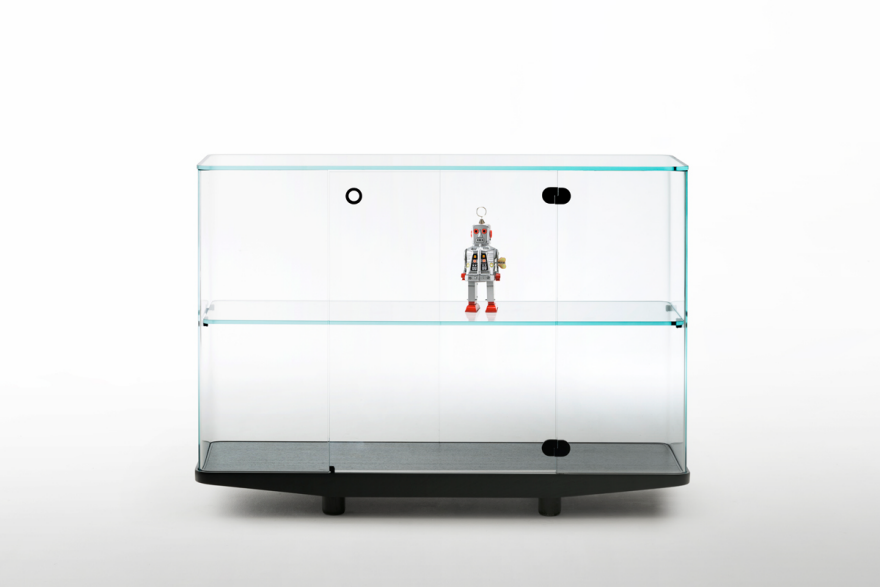 Also new this year, a series of Collector Cabinets for Glas Italia 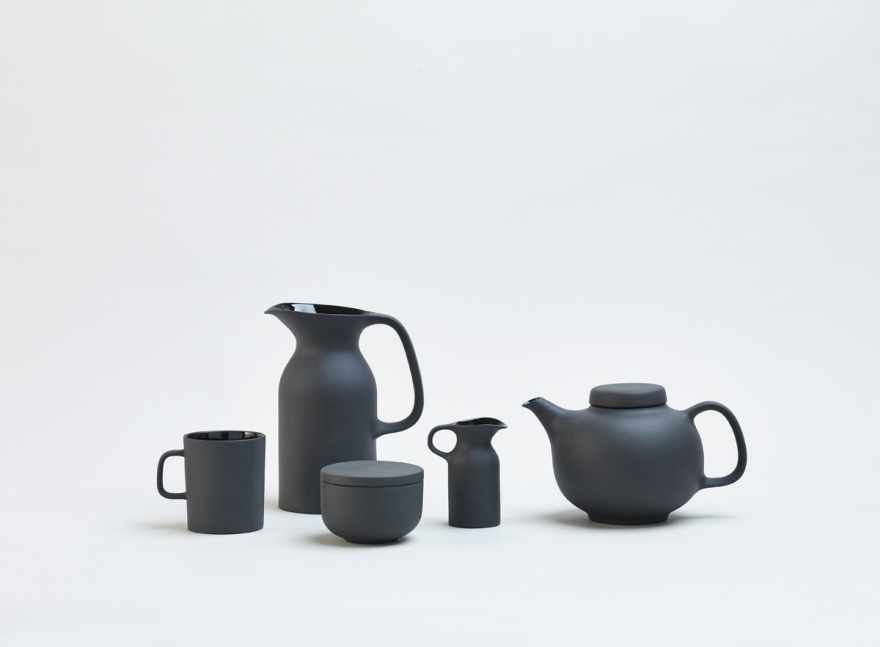 Olio, a new range of tableware for Royal Doulton

JO: Edward and I share a small-ish studio space that is probably around 500 square feet, as part of a bigger studio space that is about 8,500 square feet. It's one of these old, ex-warehouse spaces in the heart of Shoreditch, and we have a space that is interconnected underground. When these buildings were warehouse spaces, they were connected by underground link ways so that the workers could go from one to another. So we have a kind of collection of very strangely arranged rooms and spaces that have these hidden-away corridors between them.

Other than the computer, what is your most important tool?

JO: Well, it depends on if you're counting the phone as a computer. It's either the iPhone or a pen. Probably a pen.

EB: The computer is not at all important for me. I only use the computer to write e-mails. It's not a design tool for me. I'm a person who has a pen and a sketchbook or a roll of tracing paper. So I guess a pen is the most important thing for me as well.

JO: Apart from the free coffee? The sheer diversity. Every single day is totally different; every hour is different. I get to work on some of the most amazing projects in the world. Through that comes this necessity to travel and this imperative to be influenced by technicians, engineers, new clients, new materials and production methods. And all of those things contribute to a huge diversity and constantly changing working day.

EB: Designing. That sounds a little stupid maybe, but there's a lot of travel and a lot of meetings that in some ways get in the way of design. They're all necessary, but the most enjoyable part is actually sitting down and drawing and designing.

What is the worst part of your job?

JO: For me, it's the same as the best part. You never really know what you're doing and you're having to travel the whole time. The early starts can be really brutal. Being based in London, in a country which doesn't really manufacture so much anymore, we're compelled to throw ourselves around the planet on aircraft at least once or twice a week. And, inevitably, if you want to get to a meeting in Italy or Switzerland at a reasonable time in the morning, it means leaving home at 4:30 a.m. So sometimes the traveling can be quite brutal.

EB: Being away from my family. 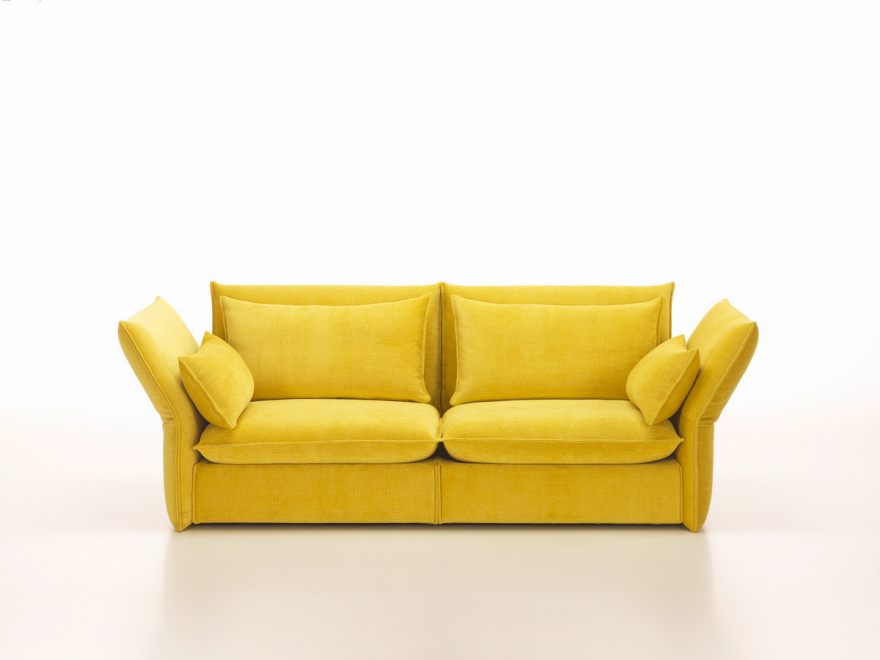 From 2014, the Mariposa sofa for Vitra

What time do you get up and go to bed?

EB: Well, right now I have a one-month-old baby, so it's sort of irrelevant. It's whenever I get a chance to sleep while I'm at home.

EB: I probably just put on another pot of coffee before I make a decision on something.

JO: I clean my table down—I always feel like I can work well on a clear table but in a messy space.

EB: When you're designing, you have good days and you have bad days. And if you're having a good day, I think you should try and work on as many projects as possible, to try and get ahead. Because if your creative brain is working well, everything seems very easy. And on other days, everything feels really tough. So, yeah, spread that creativity across as many projects as possible. 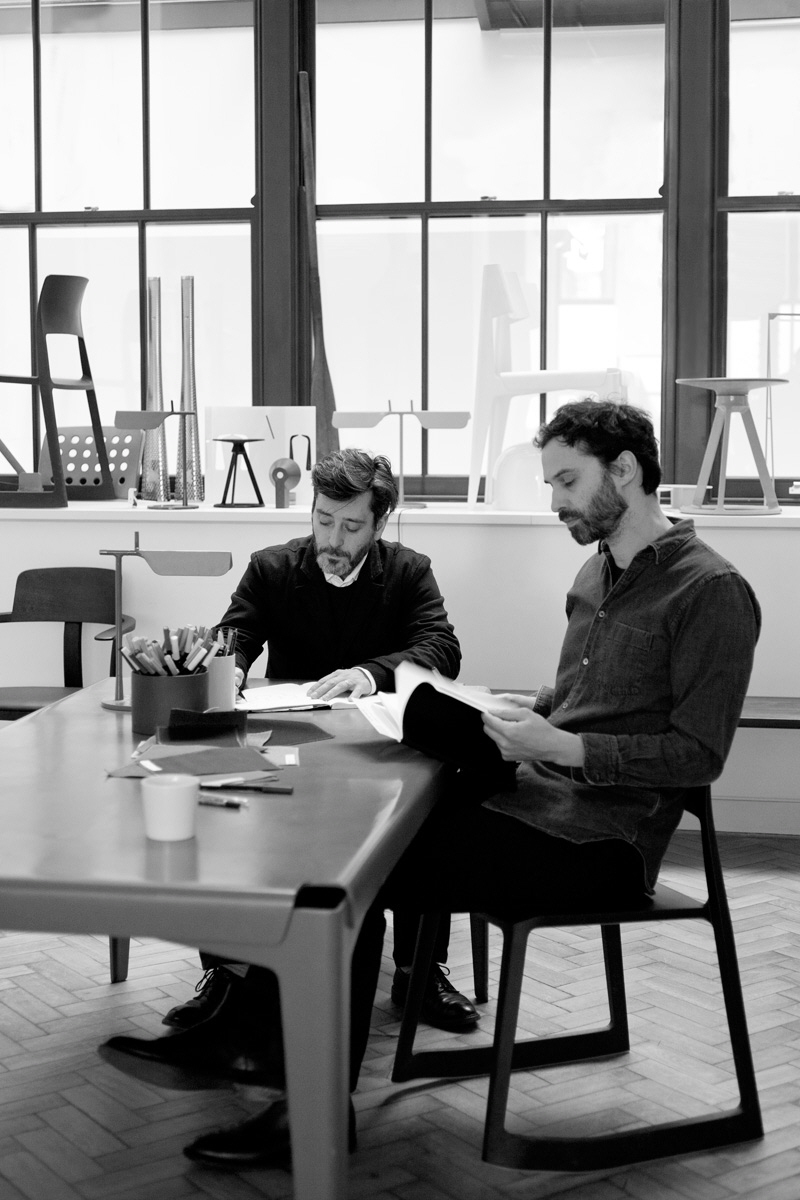 Barber and Osgerby in their London studio

What is the most important quality in a designer?

What is the most widespread misunderstanding about design or designers?

JO: That the majority of designers are in it for self-promotion. And actually our job isn't self-promotion, it's promotion of the people who are commissioning us.

EB: That we all live in these super-designer minimalist spaces. If you could see my place, it's not like that at all—it's a very eclectic bunch of stuff.

What is your most prized design possession?

JO: Probably my bicycle. It's a stainless-steel bike called a Snob, by the American company Ritte.

EB: I'm going to go back to what I was saying earlier. Honestly, it is a stool from Ethiopia from about 150 years ago. It's the most beautifully carved and simply utilitarian object.

What is exciting you in design right now?

JO: Like many people, I'm really excited by the fact that there's a huge shift back to narrative and making in design. And not so much just about industrial production. Small-scale production seems to have unleashed a whole new wave of creativity—a little bit like it did when Edward and I first graduated and there was a big recession on, and it converted people who would normally just go straight to working in agencies into setting up on their own. A similar thing is happening now. Recessions are fantastic for design.

EB: Yeah. Both Jay and I have been really interested in craft, or the handmade, from early in our working relationship. And there has been this massive resurgence in the interest in craft. So I find that very interesting as well.

If you could redesign anything, what would you choose?

JO: The roads in London, to make them safer for cyclists.

EB: I think the LED lightbulb, so that you could have a 360-degree light coming from it. But that's only because it's a problem that we're working on at the moment.