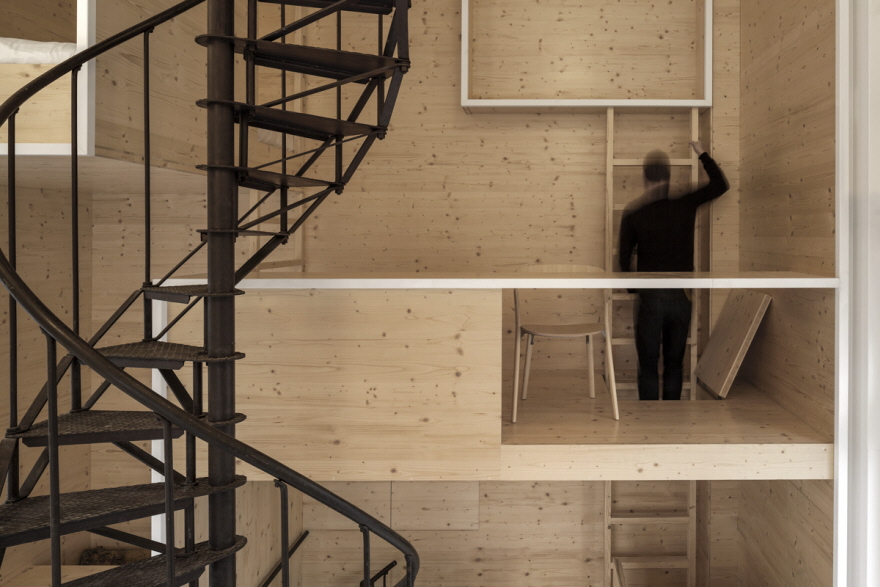 While every entry proved their merit in one capacity or another, some honorees distinguished themselves further due to the ineffable 'wow' factor. These were projects that, through cleverness, beautiful design, remarkable functionality or some other exceptional quality, immediately caught the viewer's eye and lingered there. These are a few of our eye-popping entries. 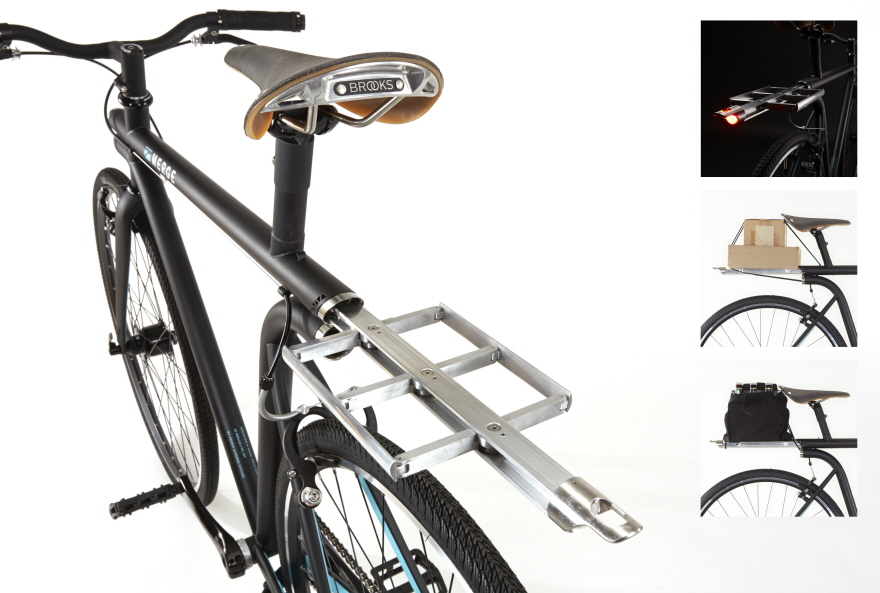 Merge packs a lot of utilities into its slender frame. For example, a retractable rear rack and integrated bungee cord can be used to carry different loads. 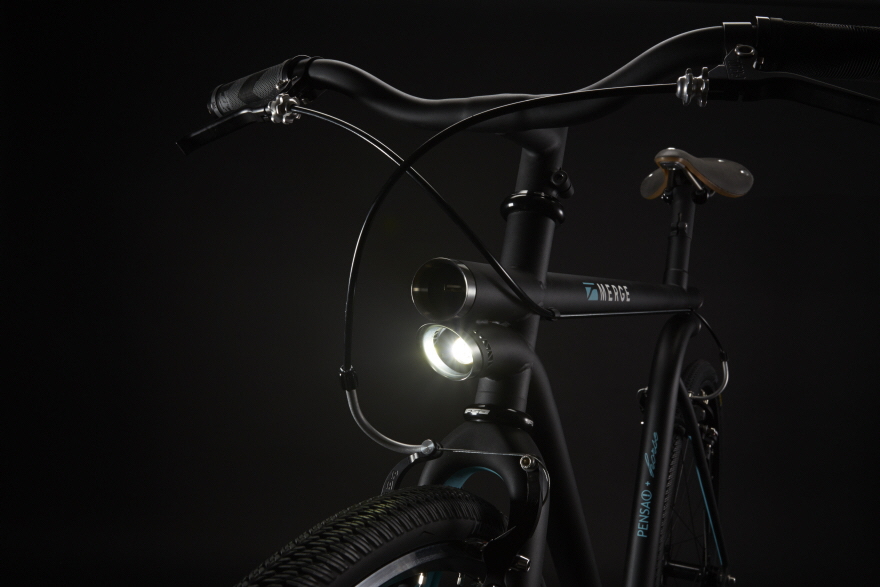 The front of the bike has integrated lighting which can even be seen from the side through a laser-cut pattern in the side, an important safety feature for night riders.

Merge—designed by Pensa and Horse Cycles—is a remarkably sleek bicycle design intended for the urban environment. The modern frame packs in a host of integrated functions, including front and rear lighting, a USB charging port, a retractable rack and U-lock holster. "In listing all these features of the design, in the end we are most proud of the overall simplicity with which they are presented," explain the designers."They are right there at the rider's fingertips when needed, but never in the way when squeezing through the tight spaces, or carrying the bike up the narrow stairs of a fifth-floor walk-up. Merge transforms at a moment's notice, and allows you to truly ride your way." Our judges completely agreed. "What really caught my attention was everything just being so well integrated into a stylish, sporty type of bike. It's a no compromise solution: It looks great and it has all this utility at the same time," notes jury member Eric Stoddard. 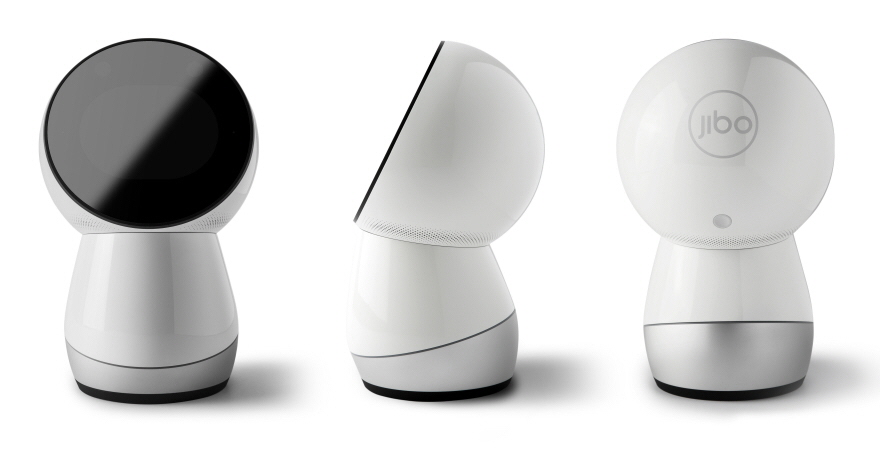 JIBO is the first ever social robot for the home. Designed with the elderly and children in mind, the unique companion is set apart by its friendly and expressive design. 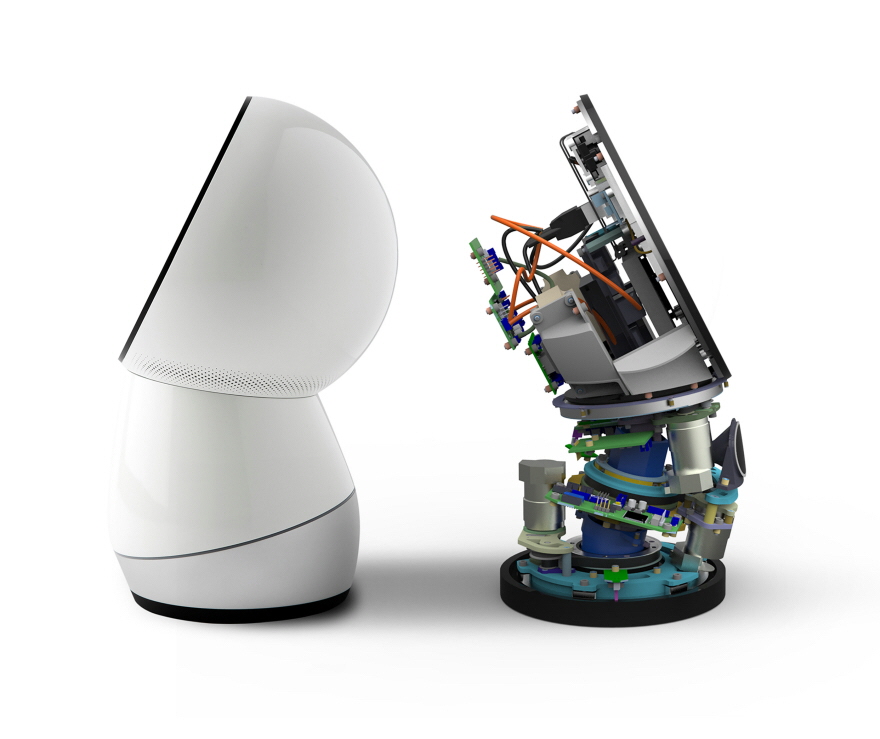 "The solution for Jibo was a seamless approach which sectioned the main head/body into cylindrical elements connected by a motor-controlled tilted axis rotation. This allowed Jibo to appear clean and non-mechanical while enabling a virtually silent movement, able to snap into a variety of thoughtful poses with precision and sophistication," explain the designers.

Jibo is a new image for robotics: a friendly, expressive and emotionally connected companion for the home. Measuring only 11 inches tall, Jibo is completely equipped to become an integral part of the home with its sophisticated voice interaction, expressive UI, and physical movement of human-like poses and expressiveness. Our judges were unanimously impressed by the unique personality portrayed by Jibo in an unsurpassed social user experience. "This is the intersection of technology and hardware, creating a beautiful object but also a beautiful experience," said jury Co-Captian Anh Hguyen. 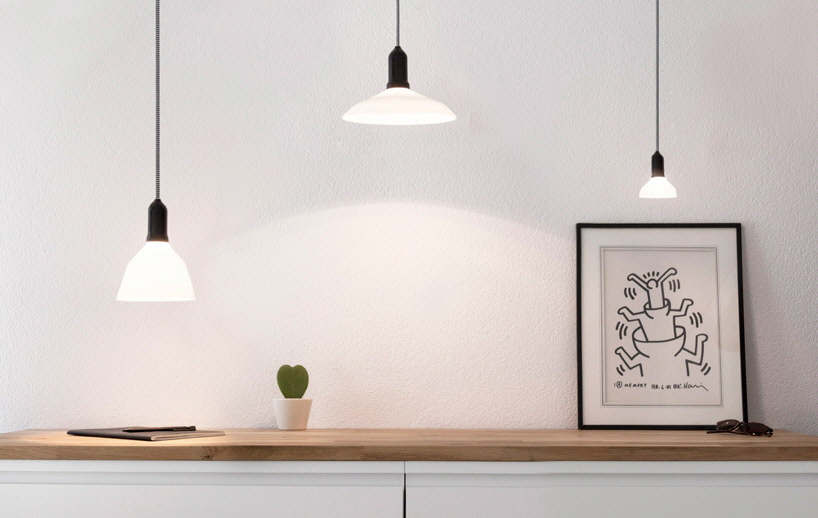 Unlike other bulbs, LEDs do no need specific glass coverings. So designer Renaud Defrancesco (a recent graduate from ECAL) reimagined the common lampshade by drawing unique silhouettes made of glass which essentially become the lamp itself. "This bulb is not only a source of light anymore but it creates a source of atmosphere," he explains. 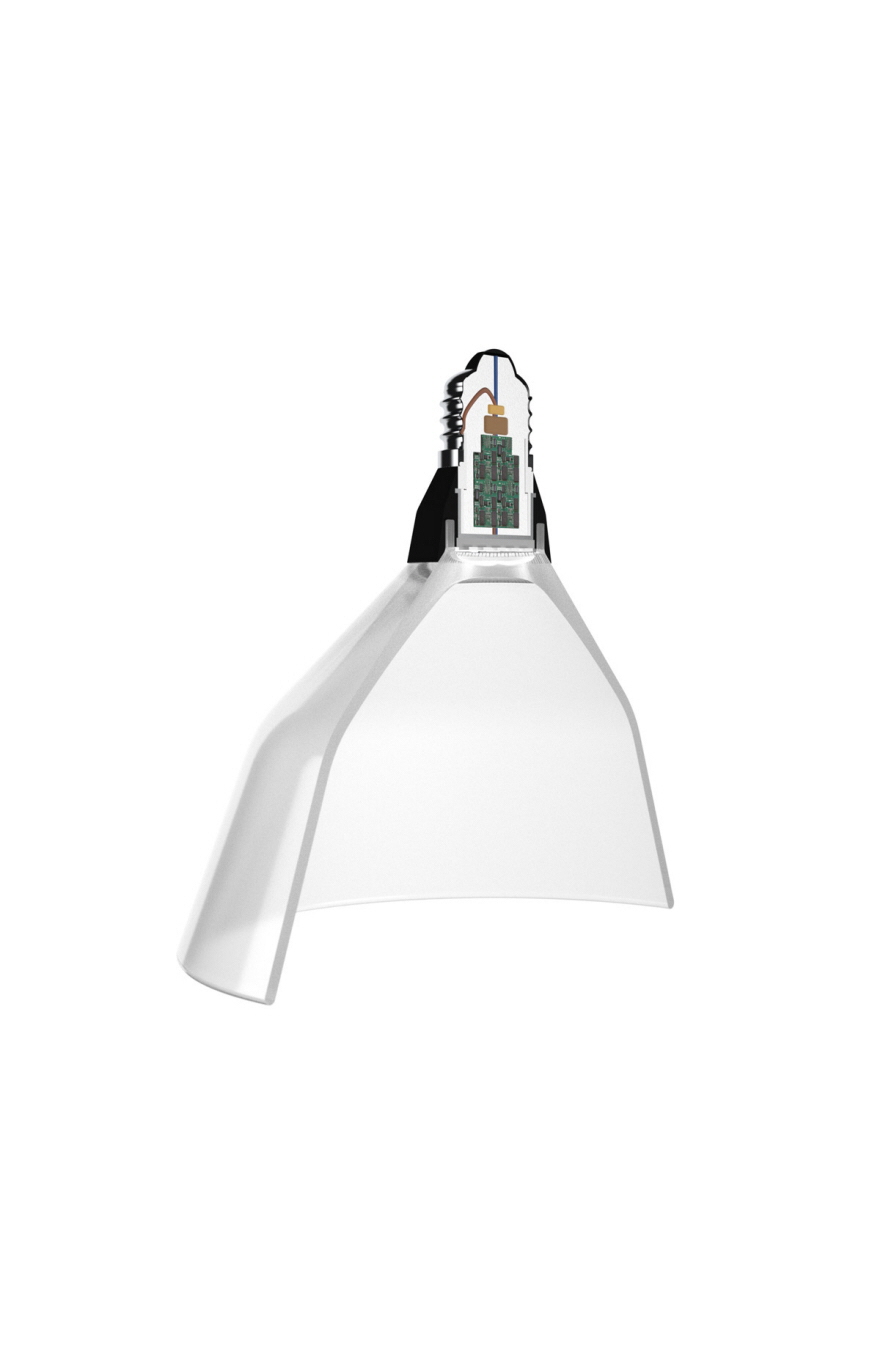 "The bulb base is electronic and is directly incorporated into the glass. LEDs have proven to be much more economic in power and have much greater longevity. In addition, the choice of glass is to reduce the number of plastic components and is easier to recycle," explains Defrancesco.

The Bulb LMP redefines an old technology by creating a bulb that doubles as a pendant lamp. Made of pressed glass and available in many shapes, the clean lines of the bulb/lamp elevate the potentials of LED technology. "Somehow LED lighting has failed to deliver a shade with an identity and yet the long life of the lighting source makes this a worthy element to build a valued housing for. This proposition adds value to a very mechanical solution," explained the jury. 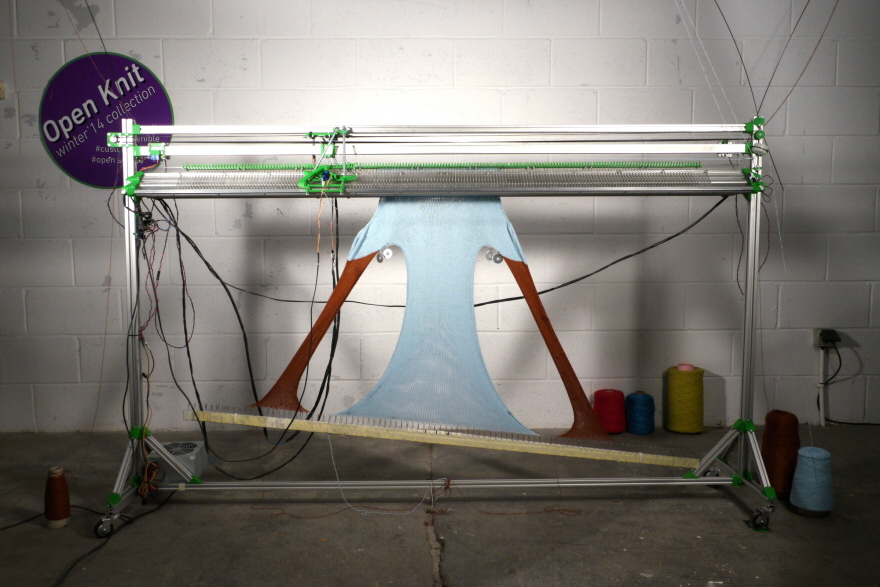 Using the OpenKnit software and printer, users can have a new piece of bespoke clothing—from raw material to finished form—in just an hour. 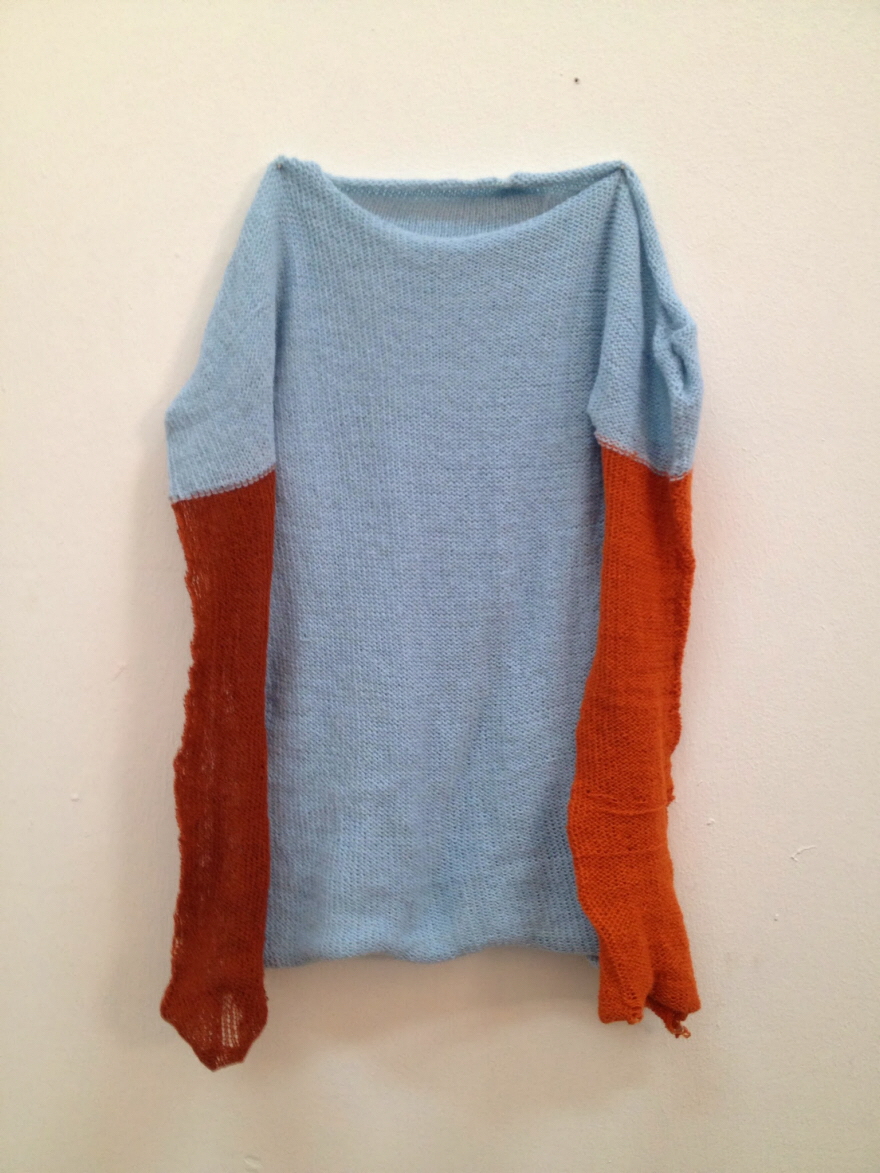 At its core, the mission of OpenKnit seeks to revise our production processes. "Production entails long and precise processes before those goods reach our hands, many of which are pervasive in our daily life, and frequently in intimate contact with us, such as textiles," explains designer Gerard Rubio. "In such a context the market price we pay for goods has not absorbed the externalities created, thus we end up paying far less for them than the real impact they have in society and the environment."

Proposing an alternative model to outsourced mass fabrication, OpenKnit is an open-source, low cost, digital fabrication tool that allows users to create bespoke clothing from digital files. As our jury remarked, this innovative idea has the potential to open up small scale manufacturing while opening the doors to a new kind of attitude toward creativity and responsibility. "I love to see this kind of commercialization, said jury member Mark Hatch. "It's accessible to a typical retail type of customer and it's open source so you can build it yourself which is very cool. The ability to design and knit your own sweater in an hour is pretty cool." 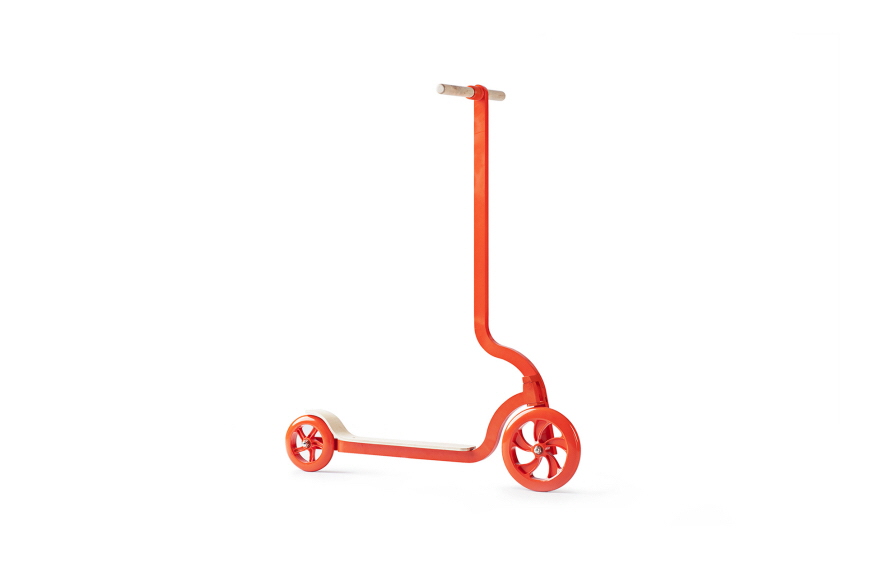 "Pigeon is composed of only three essential parts: a desk, handlebar and rotating/closing unit," explains designer Ignas Survila. "My task was to improve a scooter eliminating some shortcomings, to brainstorm the whole consumer and servicing system, to arouse a new interest of consumers in a kick scooter as a mode of leisure and lifestyle, and to make it more consumer-friendly and not complicated in use." 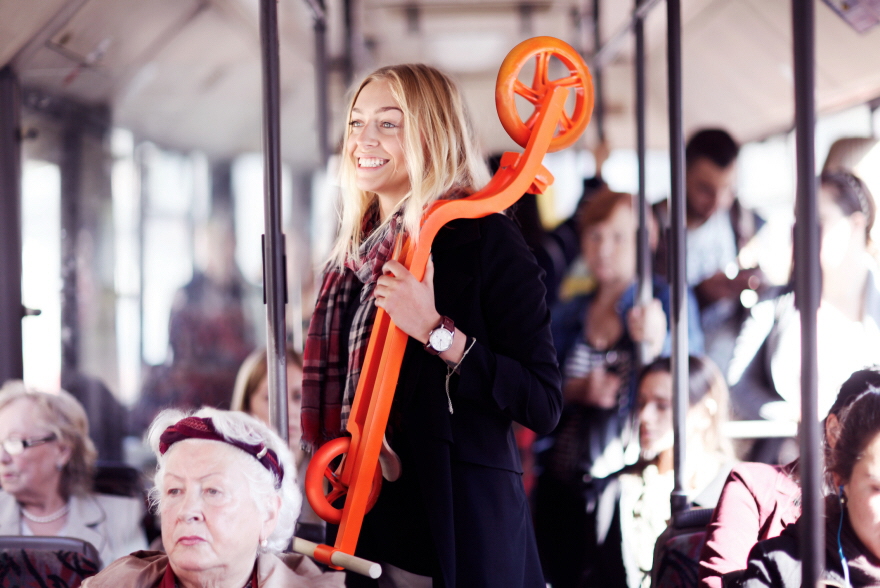 With it's simple functionality and bright color, Pigeon tries to transform the hurried commute into a positive experience.

The product of methodical thinking, Pigeon is possibly the most user-friendly kick scooter yet. "My task was to improve a scooter eliminating some shortcomings, to brainstorm the whole consumer and servicing system, to arouse a new interest of consumers in a kick scooter as a mode of leisure and lifestyle, and to make it more consumer-friendly and not complicated in use," explains Survila. "This one I really fell in love with. The styling, it's very endearing, friendly and confident. It's a new twist on a very familiar segment, explained jury member Eric Stoddard. "I have a lot of respect for the students who actually went all the way to prototype and went through the exercise of solving all the problems that you find when you actually try to build something." 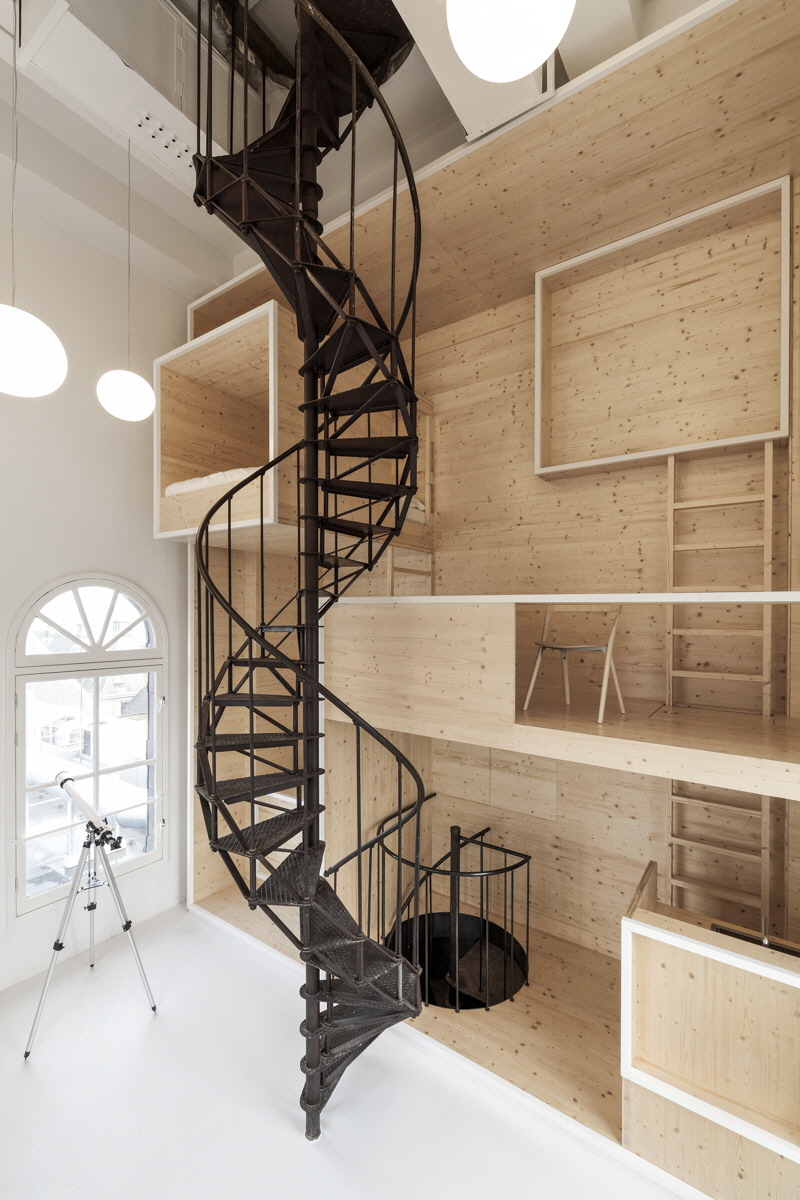 Room On The Roof is located in a small tower in Amsterdam the historic center of the city that has been converted into a cultural haven. As part of a program defined by the Rijksmuseum and de Bijenkorf, it functions as a studio space for artists of all disciplines. 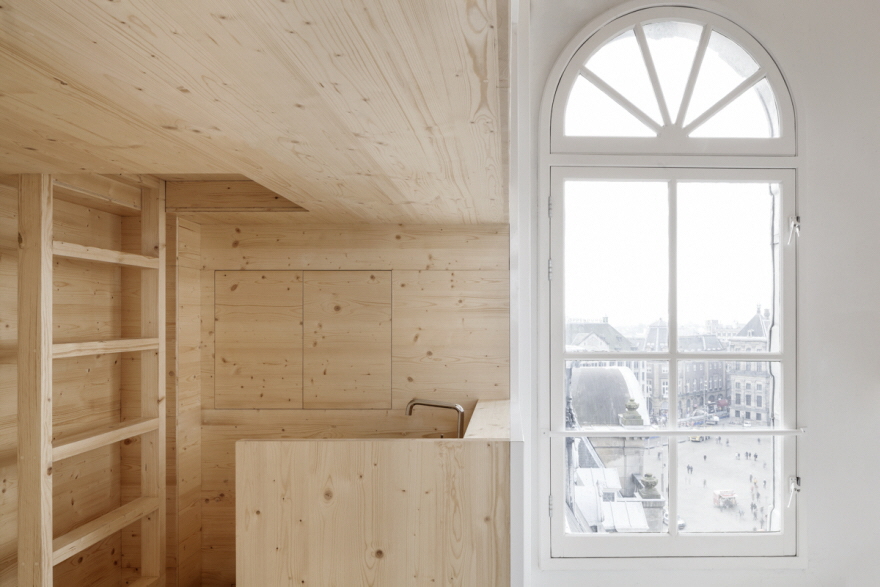 Designed by i29 interior architects, Room On The Roof is an installation meant to inspire the artists that inhabit it, using the scalar shifts of the Alice in Wonderland universe as inspiration. The space is split in two halves (or worlds): one side contains a vertical installation of wooden volumes—with a desk, daybed, pantry and storage— from floor to ceiling, while the other side is a fully white space. In the wooden half, "the functions have been stacked on top of each other as a kind of 'living cabinet' in order to experience the tower on different levels, which can be accessed via small ladders," explain the architects. "Each level gives a new perspective and view to the outside world. All accessories like a telescope, armchair and lamps, are just like the space itself all white to make a contrast with the wooden volume. The monumental spiral stairs leading to the cupola has been restored and adds to the fairytale-like atmosphere."