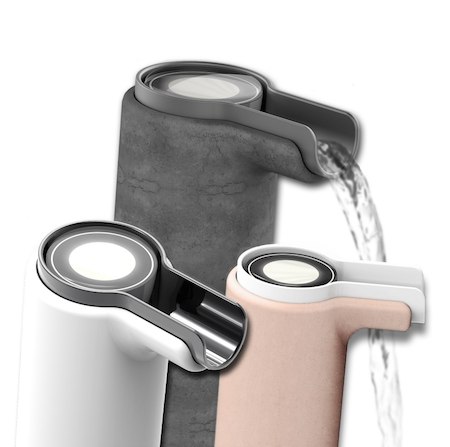 We tip our hats to the designers driven by the belief that altruism hasn't gone out of style! When others go after the shiny, new and stylish, these designers seek positive impact—whether social, cultural or environmental—in addition to strong aesthetic and functional results. Here are some of our most inspiring entries. 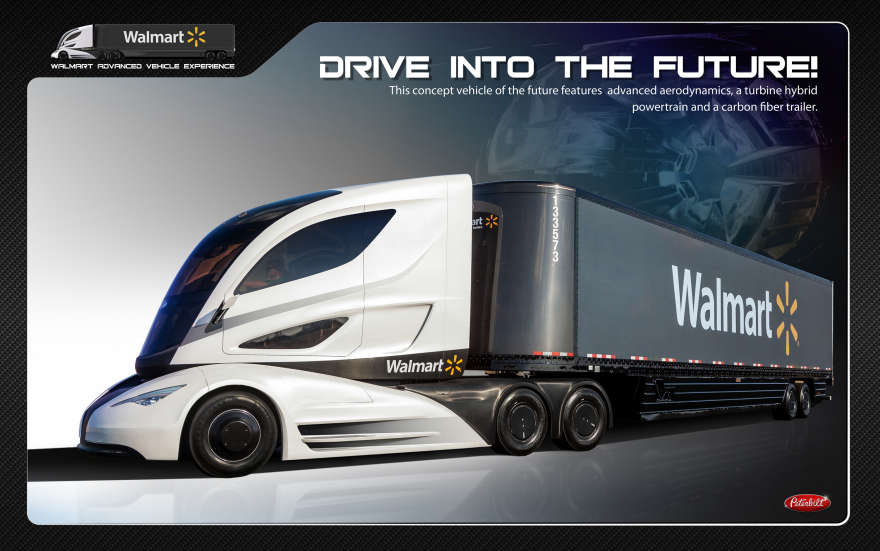 "Keeping in mind that Walmart is primarily a single driver fleet, we knew that we could reduce the width of the front of the truck by moving the driver to the center of the vehicle. The unique powertrain technology and its reduced cooling requirements allow the frontal area for a radiator to be significantly reduced, together with the central driving position, create a revolutionary and aerodynamic design," explain the designers from Peterbilt Design Studio. 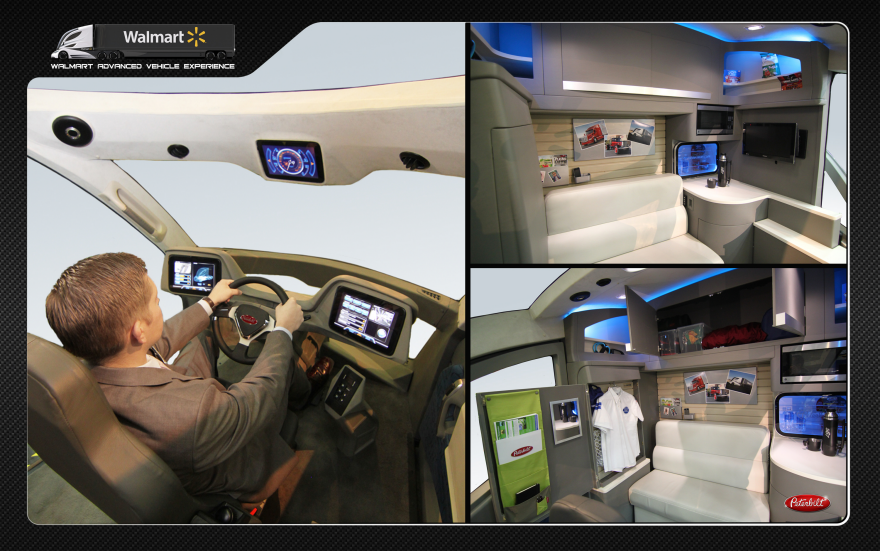 A key goal of the project was optimizing conditions for the driver. The cockpit has a modular studio space and 180 degree canopy for a unique operating experience. "The driver position is amazing," remarked jury member Eric Stoddard.

This new truck concept for Walmart might be the future of cargo transportation—it certainly looks the part." A clean power micro-turbine hybrid electric powertrain allows the flexibility of an all-new architecture, creating a paradigm shift away from the traditional trucks with a large engine and cooling system. This radically new design provides superior aerodynamic performance, while putting the driver in command at the center of the vehicle for improved safety and extreme visibility," state the designers from Peterbilt Design Studio. Though just a concept for now, the production version plans to use 100% recycled materials, including steel, aluminum, advanced composites and bio-based plastics. Additionally, the truck is powered by a turbine capable of running on a wide range of fuels, from clean burning bio-diesel to propane. "The focus on aerodynamics and great savings, translating to better fuel efficiency, is what really interested us," remarked jury Captain James Thomas. 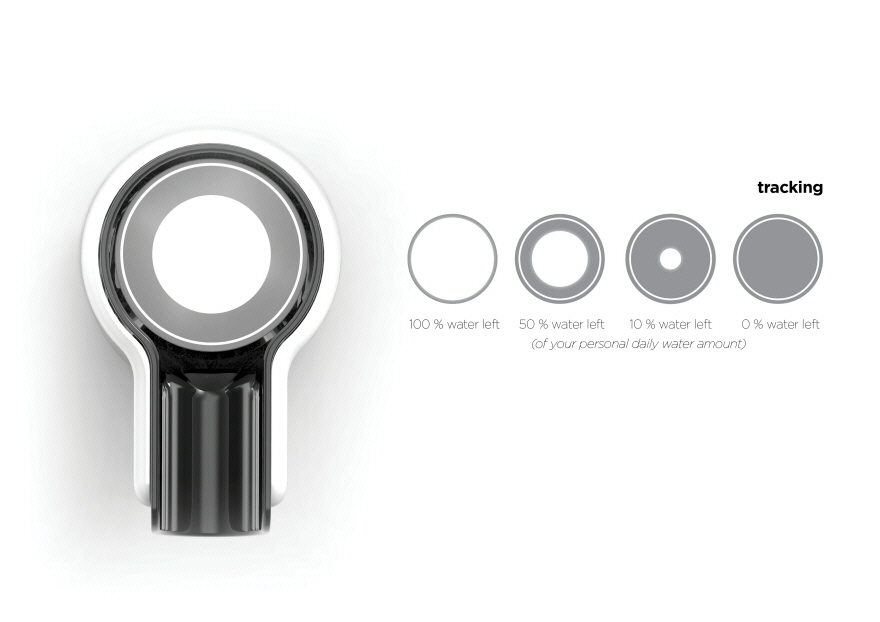 The Eve faucet sets itself apart with a function allowing users to track water consumption based on target goals defined by each individual. 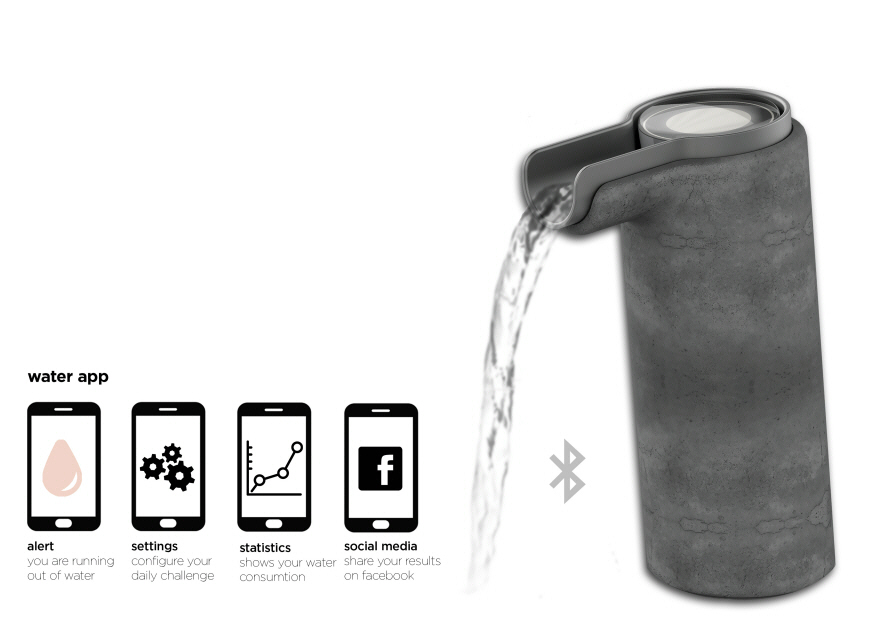 In addition to the display, the faucet can also link to digital platforms allowing users to set alerts, daily goals, and comprehensive statistics of use over time.

Yes, we all know to turn the water off while brushing our teeth, but too often that gets forgotten in the moment. Rebecca Daum, designer of the Eve faucet, thinks this might be a result of our intangible relationship to water." The water out of the faucet seems to be an infinite resource. We turn it on, it flows in a constant stream until we turn it off. We don't get a feeling for the amount we have used. We get in contact with it for a moment and then it has already disappeared in the drain," she notes.  Her simple design engages with this vital problem by creating a very friendly, unobtrusive interface to remind users how much water they have consumed and encourage better habits. "The water crisis is arguably the number one global risk, based on the impact to society," explained our jury. "One in nine people around the world don't have access to clean water. The Eve tap implores us to be more conscious users of a surprisingly scarce resource."

Give Me Shelter—Open Design Student Notable 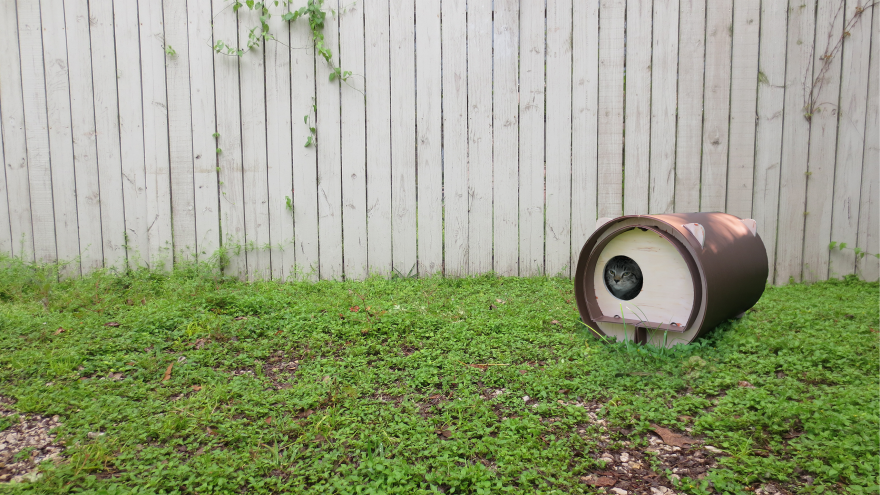 "The goal was to create a design that is easy to make and assemble, functional, and expresses the care these groups have for the cats they care for," explains designer Chris Peterson. 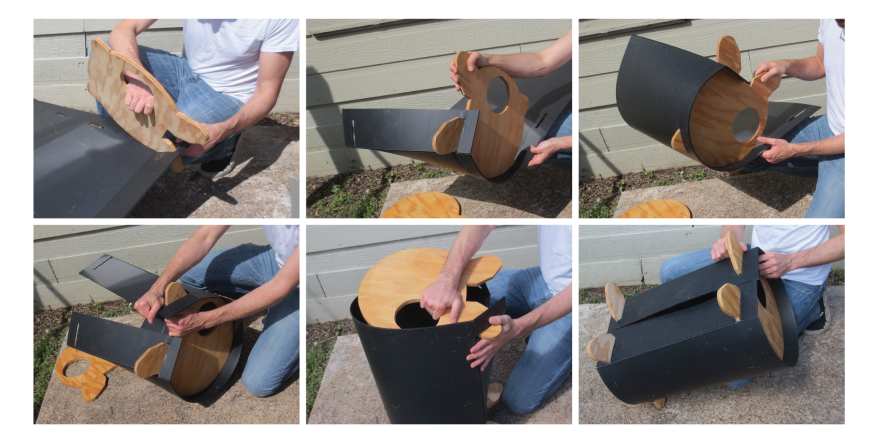 "The shelters need a strong support structure and weight to make them rugged and keep them from blowing away in the wind. Therefore, it was determined that plywood would make a great structure material as it can be made waterproof and is very easy to cut. With these two materials in hand the design began to take shape. Because the shelter needed to be easy to assemble it was designed so that the plywood could be inserted into the plastic in a way that allowed each material to support the other. This allowed the feet and ears to take shape eventually leading to a design that looks a bit like a cat."

Taking care of feral cats is an often hidden aspect of society, undertaken by dedicated people who use their own time and money while receiving little in return. Designer Chris Peterson came up with a simple solution for this problem area after becoming a feral cat caretaker himself and discovering the plights of this micro-community. He determined that the greatest benefit in tackling this issue would be a simple way for caretakers to provide shelters for cats in the winter time. and devised a solution based on the tenets of the open-source maker community. "Through this project, caregivers can use simple designs and off-the-shelf materials to create purpose-built and attractive shelters for less than any shelter they currently create," he explains. "The plans are open to the public and freely available to use as is or adapt as desired." The plans are available on corokitty.com, a destination which has become a reference point for feral cat caretakers worldwide. 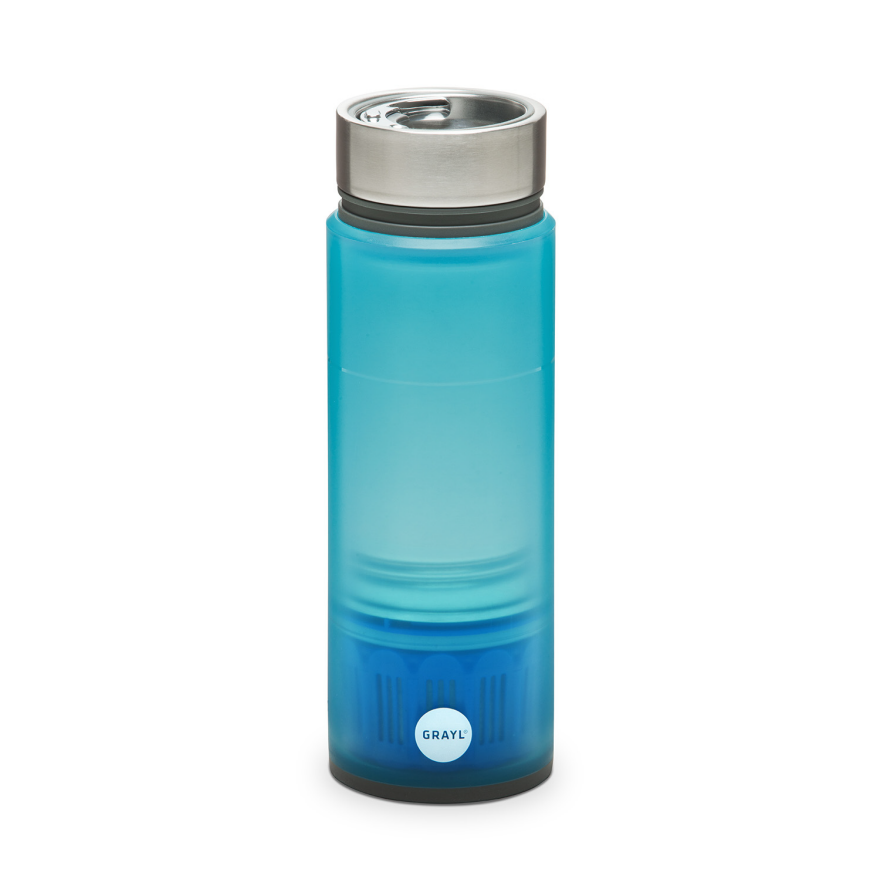 The GRAYL filtration cup works like a French Press to easily and quickly filter drinking water, no matter where you are. 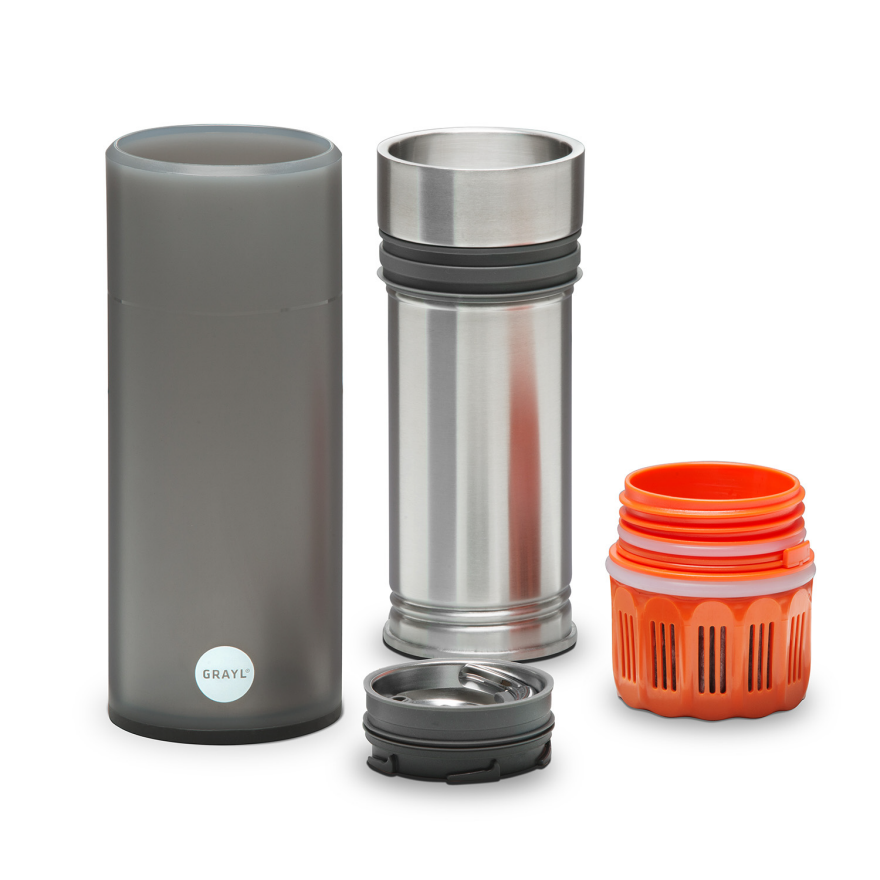 The system has interchangeable filters for varying levels of protection. "The TAP removes many chemicals and heavy metals, TRAIL adds protection from bacteria and protozoan cysts, and the TRAVEL provides the ultimate defense against viruses while traveling in developing countries or highly impacted wilderness areas," explain the designers.

GRAYL is inspired by CEO and Founder Nancie Weston's concerns about plastic pollution and water quality. "Far too many people do not have access to safe drinking water, and those of us that do rarely have truly clean drinking water. GRAYL is on a mission to change the way the world drinks water," explains the team. To achieve this lofty goal, the designers developed an easy to use, fill-press-drink system that works much like a French press. For added versatility, the system comes with interchangeable filters of different strengths for different situations. Made of stainless steel instead of leaky plastic, the filtration cup has the potential to really address a global issue. "In the USA alone, the demand for bottled water alone is staggering. Bottled/packaged water retail sales in the United States has reached $22 billion. This amounts to 50 billion plastic bottles annually, which have less than a 20% estimated recycle rate. Plastic bottles take 700-1000 years to decompose and each 16 oz. water bottle requires 4 oz. of oil to manufacture, transport and refrigerate," note the designers. 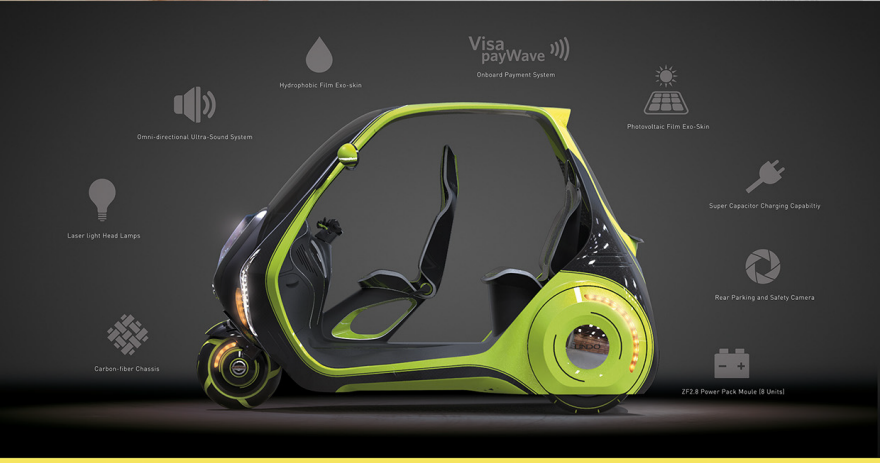 The Lindo is designed as a highly efficient and sustainable public transportation model. To this end, its' battery and motor system is a key design feature. "Consisting of two in-hub motors the vehicles' computer analyses the driving conditions and is able to turn the motors off when they do not need to be used," explains designer Kyle Armstrong, "when one motor is not in use the momentum of the tires charges the batteries." 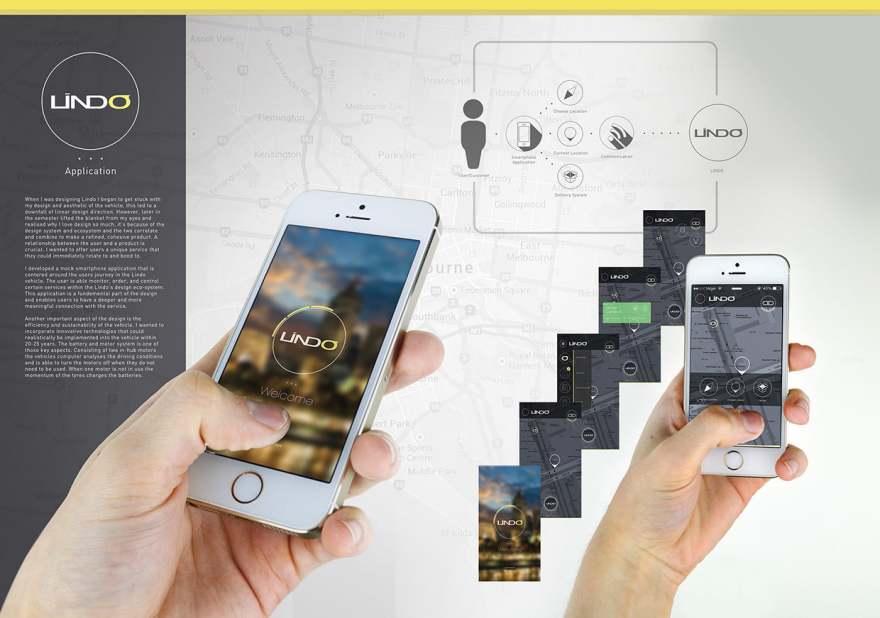 A central component of the project is empowering users with a simple to use application. "The user is able to order a service to pick them up from their current location via their smartphone and choose their destination to plan out their trip whilst also tracking and monitoring their current usage from the vehicle," explains Armstrong.

Based on the Piaggio Tuk Tuk vehicle, the LINDO Smart Vehicle is a 3-wheeled, electric vehicle designed to create a smarter alternative for Melbourne's public transport system. "How can we create a vehicle that is efficient but also somewhat self-sustaining and unobtrusive to the user," asks designer Kyle Armstrong. The resulting design is surprisingly lightweight due to its carbon fibre chassis and titanium frame, and very efficiently equipped with 6 lithium ion battery cells that are capable of charging at one quarter the time of conventional battery systems. "I love the completeness of the design, everything's been thought through. From the app, to every detail on the vehicle- the lights, the handlebars, the gauges, the vents, the power train. All of it's been thought through and designed. So it's a very complete solution," said jury member Eric Stoddard.