One designer, many engineers 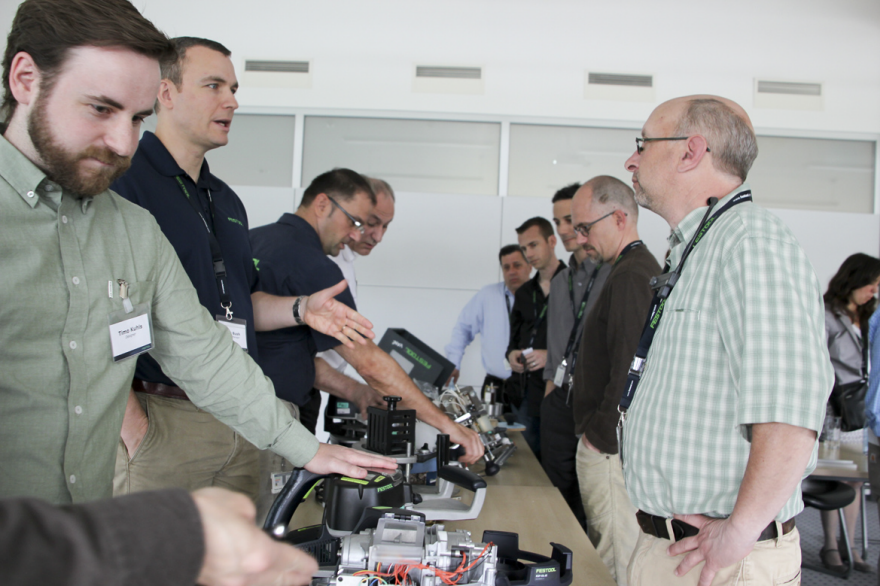 We got to have a brief chat with Kuhls, who's quick to defer credit to both Roland Schirrmacher (the consultant who has been doing Festool ID for 30 years) and Festool's crack engineering staff. We also got to hear the story of how Kuhls' tongue-in-cheek industrial design Masters thesis landed him the gig a lot of designers would kill for. Those shots are shown at the bottom—and the crazy thing is, he made functioning prototypes!

Core77: During the presentation, it sounded like the interpreter said you are the only industrial designer.

Timo Kuhls: I am the only internal industrial designer.

How is that possible, that Festool only has one designer?

I thought the same thing when I came here in 2008! But there is an external designer, Mr. Roland Schirrmacher. He is based in Landsberg, Bavaria and he's been designing the products for the last thirty years; I was just the first one coming internally. Mr. Schirrmacher has quite a lot of expertise and experience coming with him.

Is Mr. Schirrmacher still active, or have you assumed his role?

He is still working for us. Since I joined Festool in 2008 after finishing my Master's degree (Master of European Design, MEDes), we work on our products individually and distribute the upcoming projects according to our capacities—I'd say roughly fifty-fifty.

Is there any collaboration?

We do need to collaborate in order to make those products seem the same, you know? To make it look like a Festool. I think it's very important to have those guidelines, this very distinctive design language of Festool. As long as you've incorporated that, you can go on working.

I thought the ID department would be like, twenty people, based on the quality of the work.

Thank you very much. But I think much of it comes from working together with the engineers, you know?

[Joking] And is there only one engineer?

No, no, no! There are something like forty* engineers.

And how did the design process, the collaboration between design and engineering, go for the Conturo?

How can I say it—as we are focusing on the use of the machine, on the ergonomics and the functionality of it all, there is very much decided in the early stages. For example, we see that this surface [pointing to part of the Conturo's body] was not able to be moved anywhere, because the workpiece needs to go here [pointing]. You know? I needed to place the functional parts in here [pointing], as centered as possible, in order to have the balance right. And all of those things, all of those functional and ergonomic requirements, by themselves, already form a certain aesthetic that is functional and nice itself. So, the pure function already has a feel to it, that you can say, "Okay, that thing is working." And you just need to take that and put it into the Festool world.

So we're [very focused] on the functionality aspect. The form follows function. Which is really an old and much used term, and it still applies very perfectly to us.

Sure. So, you spend a lot of time physically handling models, as opposed to just staring at renderings.

Totally, yes. It's also a funny thing: Because the first model over there--with the wood and styrofoam and everything—it looks, like, totally crappy. But this is the part where the basic decisions are made, you know? When you place everything. You say, "Okay, I'm going to handle it in this way." And as you progress towards the end, it's all getting more into details, details, details.

Also, another thing. When you have a really new technical solution, where you don't have any predecessor, you have to experiment more, to find solutions to these new problems. You know? As opposed to, if you already have let's say, a cordless drill—you kind of know where the components are, and you can just use some styling over it or something.

But that's not possible with a machine like the Conturo. Because all of the components can turn 180 degrees in the next day [as engineering changes are made], you know? And you don't know where you're heading. When you're at one stage, you don't know what the final stage will look like. So, these [gesturing to the line of prototypes on the table] are different processes for each development project.

There's a lot of parts to the Conturo, so during the design process, how do you determine the sequence of what to work on?

It comes naturally out of the process. First of all, you need to know, say, "Okay, where does the housing need to go around?" You have the functional phases. You'll see this part here [points to machine] needs a screw that needs to go out forty millimeters, because it needs to make space for the next pellet to come in. So, okay—I need to put the housing around here. You always have these small things that must be addressed.

I have to negotiate with the engineers. To say, "Okay, please make this as small as possible, so I don't need to move this corresponding part out too much." So not to make it too bulky and everything. So the essence of it is really to communicate on a day to day level with the engineers. It's really important to work very closely with them. So, that's why I'm sitting next to them, we're all sitting in the engineer's department. It's like, you cannot decide which radius to put on here [pointing] if you don't know about the structure of it underneath. So, the progression of what comes after what in the process, comes out naturally.

And since they have 45* engineers and just one you, what is it that makes your job distinct? For example, they didn't hire a 46th* engineer, but instead hired you, an industrial designer.

Sure. They need somebody who knows how to put something into a form. You know? Like, an engineer will say "Okay, I need a screw there, I need something there" and that's it—"It's gonna be square, I don't want to lose time just to make the surface." So I'm helping everything fit in. My job is really to make all the products look like a Festool product. So, we need to know "What does the brand want to communicate, in terms of values? What do we want the customer to feel like while using the products?" And it needs a designer to make it fit this distinct design language, of course.

I'm sure a lot of people wanted your position—do you know how many designers applied for it?

That's another thing—there was no application or anything. But I made my Master's Degree in industrial design. And my thesis project was—do you know Festool's cordless drills? They have this FastFix connection.

I used that to make tools for the man who is staying at home with the children. You know? Who's lost his manhood and needs to have some toys to play with in the kitchen. So, I made FastFix products for the kitchen. Or to work the grill. And salt-and-pepper grinders that look like a double barrel, push [the reverse switch] to the right for salt, left for pepper.

So, there were different products which I presented here. And they liked it, so the next month I started here. So that was a very lucky process for me, actually coincidence and luck. That's it. Being at the right place at the right time.

Well, I know it was seven years ago, but congratulations!

*Clarification: It's possible Kuhls was referring to the amount of engineers he worked on the Conturo project with.

Go on to: Part 6 - Behind the Scenes with Festool's Testing & Quality Control