Core77 Visits Festool, Part 6: Behind the Scenes with Their Testing & Quality Control

The crucial steps in maintaining the tools' reputations

In the design process post we saw what goes into the development of a new Festool power tool, over at the company HQ in Wendlingen. But once the designers and engineers have the tool off of their desks and it's ready for prime time, another set of teams over at Festool's facility in Neidlingen have jobs that are just beginning.

Imagine you're a prospective buyer, kicking the tires on a Festool at a dealership. The designers may have slaved over the handle and weight balance of a tool, and yeah, it sure feels ergonomic when you pick it up—but how does it feel after several weeks, months or years on the jobsite, when you factor in the vibration of the motor and the resistance of the material you're working? Does this thing get uncomfortably hot after several hours of constant use? Is the sound it makes becoming unbearable?

Festool's approach is to work these long-term issues out first via extensive testing. "Our commitment is that if we come out with a tool, it has to be perfect," says Festool CEO Christian Oltzscher. "We don't want the customer to do the tool testing for us; it has to be perfect when it goes out. It doesn't work all the time—we're not perfect—but that's the place where we're trying to achieve.

"And again, it's the long term thinking in mind. Not just selling a lot of units during the initial market introduction, but making sure customers are really happy with the tool in the long run." The company also guarantees that they'll keep spare parts for any given model in stock for ten years, giving customers long-term repair options in the event something happens to the tool. 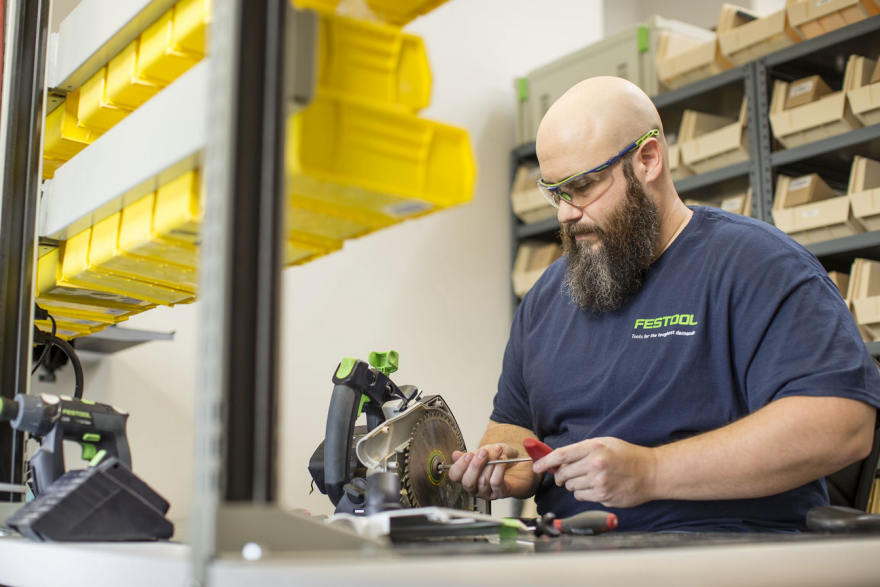 Speaking of things happening to the tool, we got to see not one, but two of Festool's testing facilities. At these locations they not only abuse the tools to check durability, but also run them through a battery of tests to check for long-term ergonomic implications.

Editorial Note: We were not allowed to take photographs inside these secretive facilities; company-taken photographs were subsequently provided to us, and sadly, a lot of the cool stuff is not shown. Also, at these facilities some of the presentations were given by floor employees in German and translated to us on-the-fly via headphones; thus I was not able to record and transcribe them, but for direct quotes must rely instead on documents subsequently provided by Festool's press department.

"The key tools of the craftsman are his hands," reads the first document. "Festool has taken up the task of protecting the worker's hands by lower vibrations. Thanks to a testing device for hand/arm measurement, the vibrations of the new ETS EC Generation sanders were able to be monitored in order to optimally design the tool. This protects the craftsmen from what is referred to as Raynaud's syndrome or white-finger syndrome."

As for checking to see which parts of tool housings get hot:

"With infrared photos the Testing Department sees the heat generation in the tool and can thus make corresponding constructive changes at critical points." 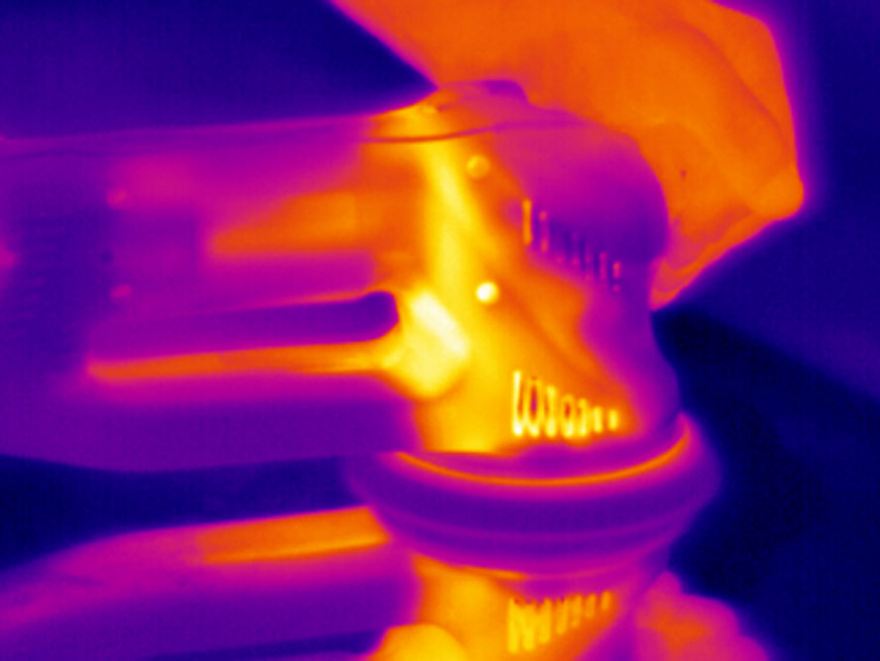 In a special sound room resembling a recording studio—microphones everywhere, sound-dampening foam lining the walls—they check the audio of different tools, tuning them until they've achieved a "pleasant noise level." With a back-and-forth between the testing guys and the engineers, they can determine if things like this work: 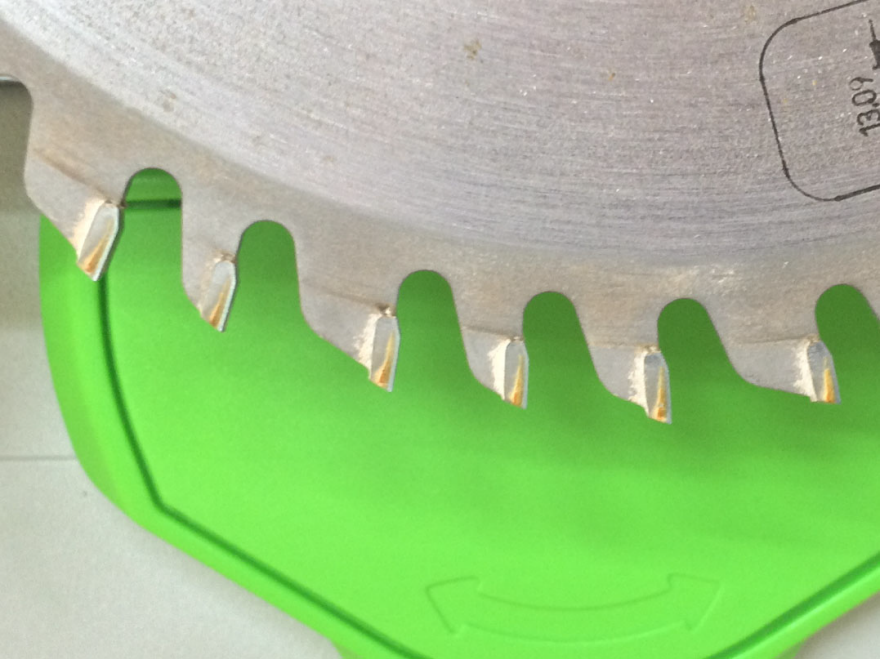 Those are the teeth on the sawblade that comes with their REQ 55 track saw. As you can see, the distance between the teeth is inconsistent. Festool does this because staggering the tooth distance in the manner they have preserves the cut quality, but produces an irregular soundwave that is less irritating to the ears than the soundwave produced by evenly-space teeth.

Another testing room has to do with manufacturing. Techs calculate exactly how much torque needs to be applied to securely affix a particular component with a particular screw without damaging either. These figures are then transferred to the production floor. In the shot below, you see two ladies on the assembly line—which is like hospital-clean, by the way—and they've got hanging pneumatic drills in front of them. Each of those is set at a particular torque to drive a particular screw for a particular part of the assembly, all arranged in order of course, to move it up one counter and down the other. (Festool uses a U-shaped progression rather than a straight line; keeping the assemblers in closer proximity means they can quickly communicate if need be.)

In the Dust Room, a series of shelves hold boxes labeled with different geographical locations. The tech explains that they have various types of dust flown in from around the world—apparently Arizona, for instance, has particularly aggressive dust—and they blast different varieties onto the tools "for hours and hours," while the things are turned on. "The device must pass this durability test while in operation - if not, there is a painstaking search to find the locations where the dust has caused damage. This plays a very important role particularly for sanders." 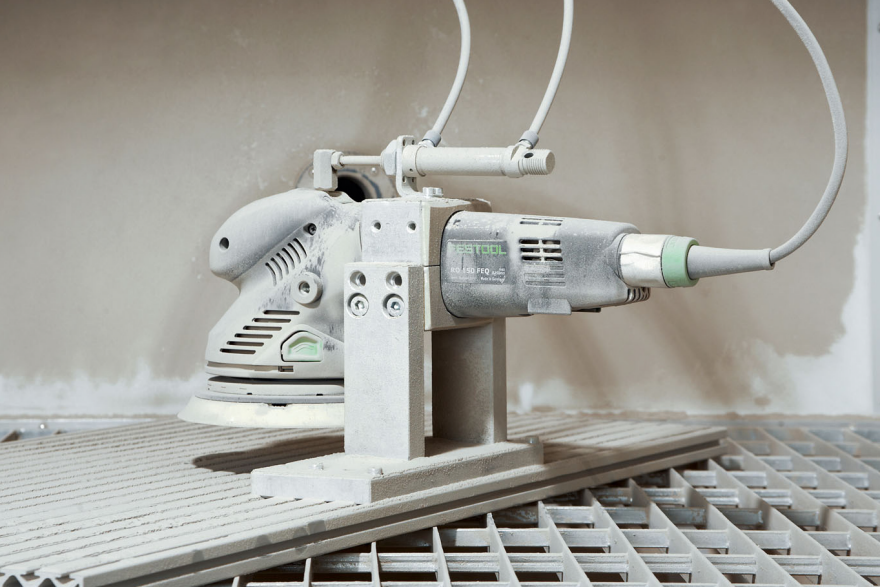 There are also tests where tools are exposed to temperature and humidity extremes. There are endurance tests where machines are turned on in, say, March and not turned back off until April. Additional electrical tests have the tools plugged in and running while wonky fluctuations in electric current are fed to it. There are impact tests where they drop the tool onto concrete from different heights, varying the tests so that different parts of the tool receive the impact.

At another facility we saw, the CT dust collectors are being dragged along a treadmill while they repeatedly slam over a strip of wood attached to the track. (This was meant to simulate being dragged across a threshold, but at an inch or so tall, this looked like a threshold installed by someone trying to get fired.) Two doors down we're shown into a room that resembles an abattoir, with a grate floor; in this room a semicircular perforated metal tube is spraying water—and not a fine mist, more like the volume of a lawn sprinkler—directly onto a vacuum unit, and rotating nearly all the way around it (in the direction of a jump rope) to get water into the bottom of the vacuum too. If it lives, it passes. 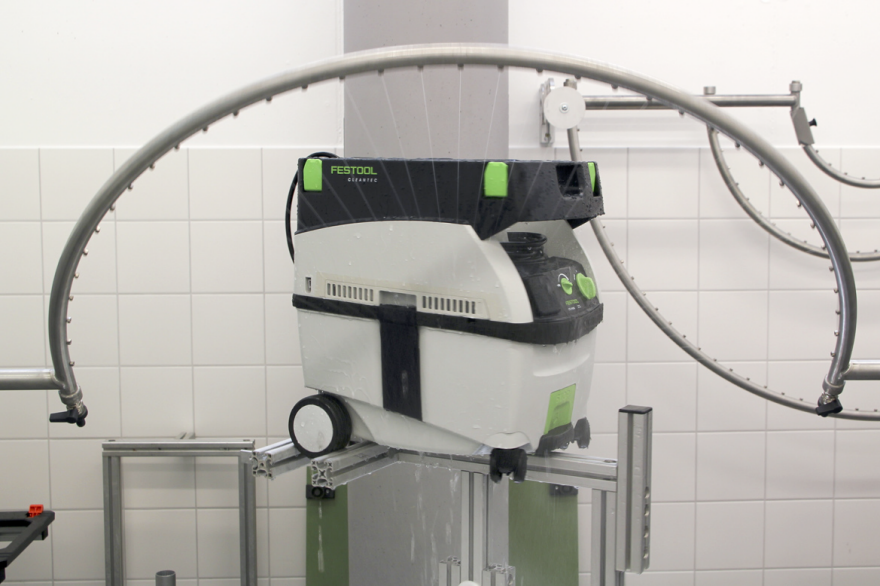 When these products pass the tests, it is due to the design and engineering—and also to the work of the guys we'll hear from next.

"If the products don't fulfill the lifetime requirements," asks Norbert Wahl, "why should I pay that big money for Festool tools?"

As the head of Festool's Quality Department in Neidlingen, Wahl is one of the people whose job it is to ensure that a customer never says those words. "Lifetime is a very big issue for Festool," Wahl says.

The task for Wahl's department is at least as challenging as the design, engineering and testing; and as we've seen with much of Festool's processes, the Quality Department starts at the end, with the customer. "The customer needs things like: Perfect results, bearings and gears that last a lifetime, robustness of the housing, low vibration, precision," he explains. "It's very important for us to translate the customer's requirements into our technical requirements, into things we can measure." 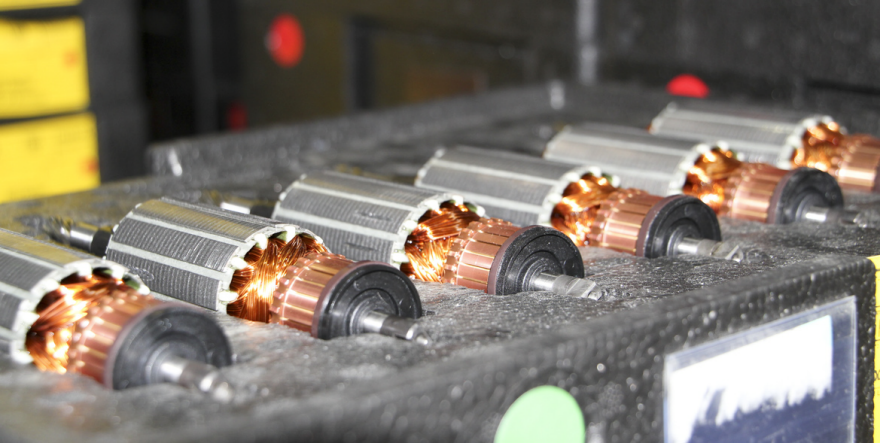 What Wahl and his team need to measure is staggering: Neidlingen deals with some 70 million components that go into 62 different tools with a total of 700 variants of those tools resulting in 2,845 sales articles. Last year they pumped out 650,000 finished tools. It is the Quality Department's job to go over the constant influx of gears, ball bearings, electronic components and the like, trying to sniff out any defects on the micrometer level. 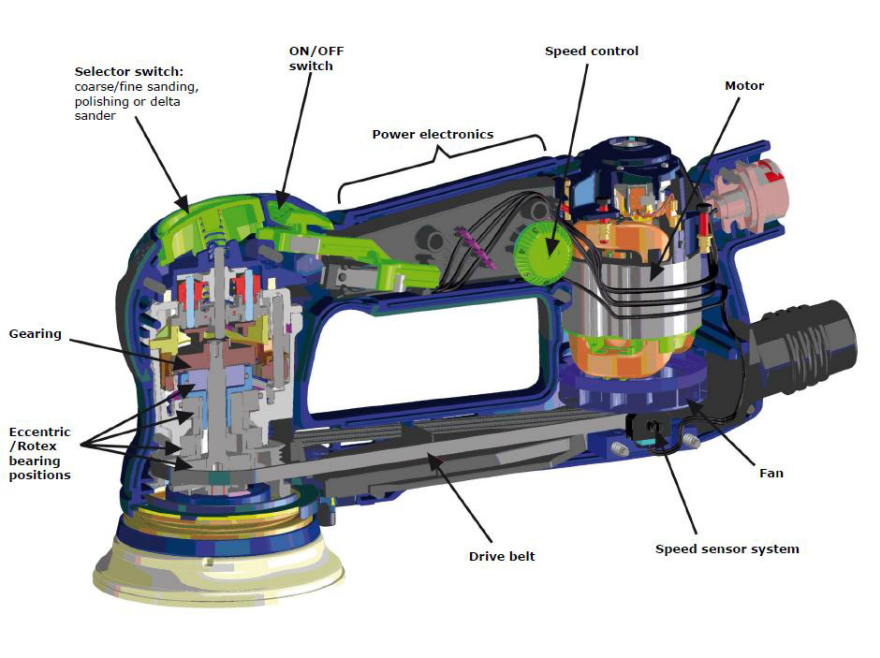 Targets are set, and in some cases surpassed. Wahl points to a bearing of the sort used in a sander to give us an example: "Here is the cylindrical shape of the bearing bolt. The shape should have a deviation less than 0.01 millimeter. Yeah? And we managed to have it below five micrometers. [That's 0.005mm.] So, I would say that's almost perfectly cylindrical. And that meets the precision of Festool."

Maintaining the quality standards "is only achievable if all processes and requirements are coordinated over and over again," says Jochen Kleh, Plant Manager at Neidlingen, "in close dialogue with all participating partners and a common understanding of the required quality is achieved." Getting it right means that "then all our efforts can also be experienced by the customers, whether in the form of a significantly longer service life, greater precision or perfect working results. That is our quality guarantee."

Every once in a while, of course, they find a defect; Wahl reveals the numbers versus his goal. "We need 100 percent perfect parts. For us, 99 percent—even 99.9901 percent is not enough. Because that would mean 99 parts per million are bad parts, and this is not enough for Festool.

"So, eighty percent of all our suppliers are providing less than sixteen parts per million bad, here in the production plant. And we are still working on it very hard. Each day we have to measure them, and to guarantee the quality of all those similar components."

"And we are not afraid of some of our competitors in the field. Because we know that we have the know-how of decades. And also the spirit of our engineers will ensure our quality for the next decades.

"Quality," he finishes, "is when our customers come back, and not our products." 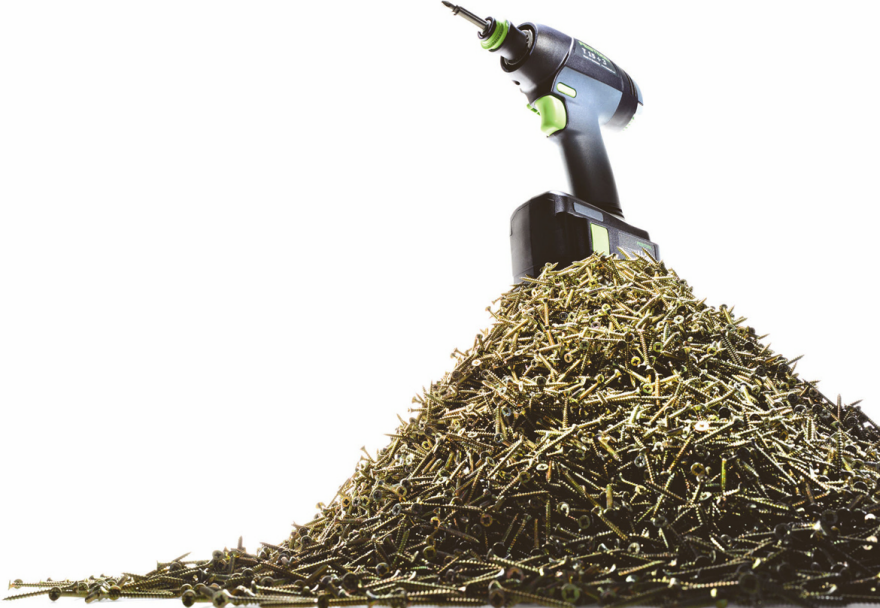 Core77 Visits Festool, Part 6: Behind the Scenes with Their Testing & Quality Control