David Adjaye on His New Line of Textiles for Knoll

“There's a vibrancy and movement, but it's not intense; it's not something that's supposed to trip you out.”

Today, the Cooper Hewitt, Smithsonian Design Museum, opens David Adjaye Selects, an exhibition of 14 West and Central African textiles drawn from the museum's permanent collection by the Ghanian-British architect. Adjaye's work curating the exhibition was also the inspiration for a new line of textiles he designed for Knoll, which debuted at NeoCon earlier this week. The line—six upholstery fabrics, two draperies and one wallcovering—was developed by Adjaye with KnollTextiles' creative director, Dorothy Cosonas, over the course of two years. On Tuesday, we spoke to Adjaye about the patterns, colors and processes behind his first textile collection. 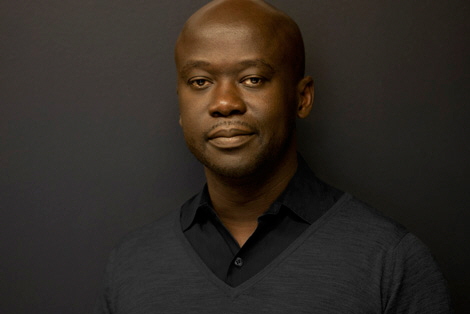 How did you go about taking these traditional textiles from the Cooper-Hewitt's archive and modernizing them, or making them work for a contemporary interior?

The whole project for me is not about ethnic mimicry, which I think is a kind of Disneyfication, but about craft traditions and honoring craft traditions. You know, weaving and print-making on the African continent have this incredible history of figuration and abstraction, and I wanted to note that in the body of the collection. We had nine different processes from nine different mills—everything from digital printing to woven systems and new weaves that are three-dimensional and so on. So it's trying to acknowledge the notion of different kinds of operations; it's not from any singular place. But then it's also trying to inherently understand certain structures within these different disciplines. Tempe weaving, thatch weaving, reed weaving—all of these different techniques are honored, while trying to find contemporary conditions.

For instance, there's a piece called Djenne where we spent a lot of time looking at using cotton and nylon to create this reed-like shimmer and mass and texture. I'm really excited about that. When you look at it, you think it's reed but actually it's a completely new hybrid material. And it's performance-rated and fire-rated. 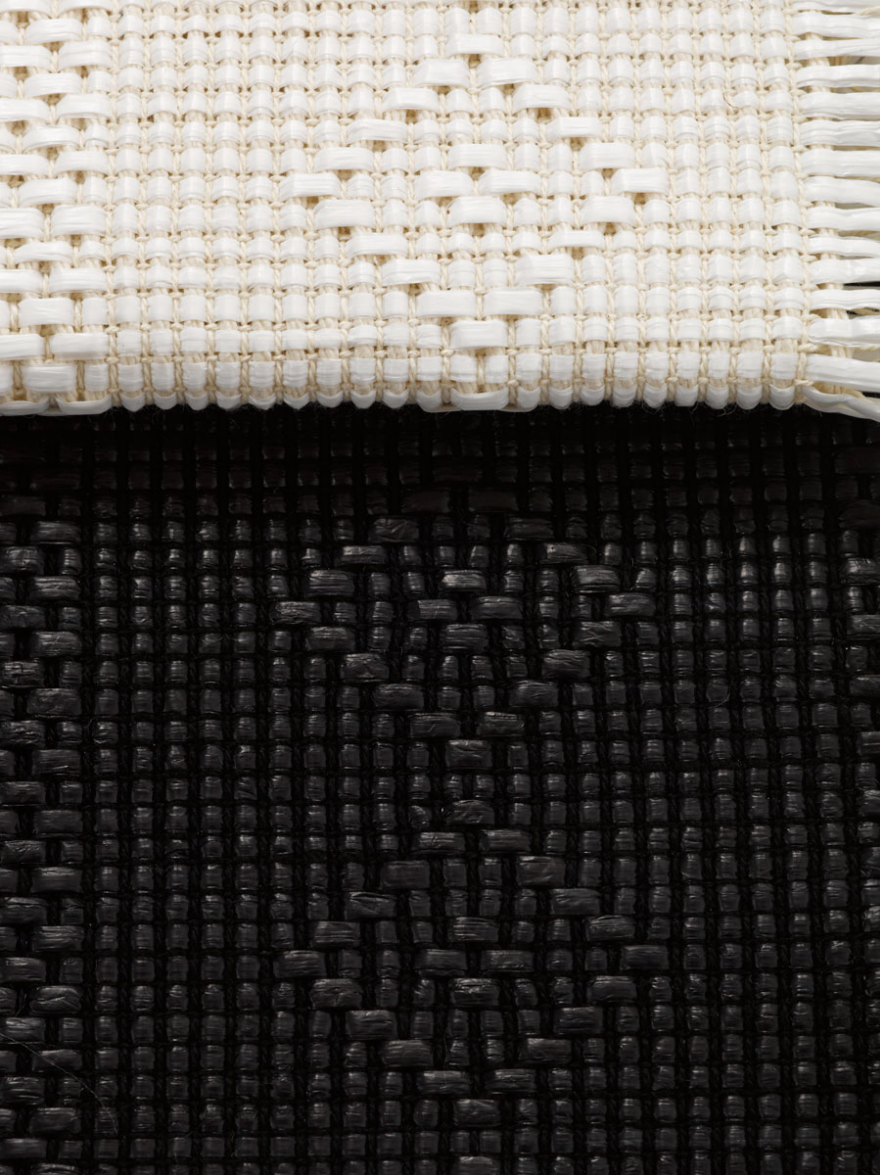 Was it difficult to capture the feeling of a handmade textile in a product that has to meet these strict specifications for commercial use?

There was always this idea of the handmade, the way in which the work is kind of unraveled slightly by gestures that try to mimic, for example, a string being pulled out of certain textiles in Africa. In Nigeria especially there's a technique where you weave and then you pull out string to kind of destabilize the weaving. That creates a human quality that makes the fabric much more endearing and gives it a particular energy. I really wanted that in the work. If you look at the entire collection, all nine different systems, there's always this idea of a kind of imperfection which is perfectly made. That's really important, that we celebrate imperfection—which is not about mistakes but about the idea of the human being behind the process. 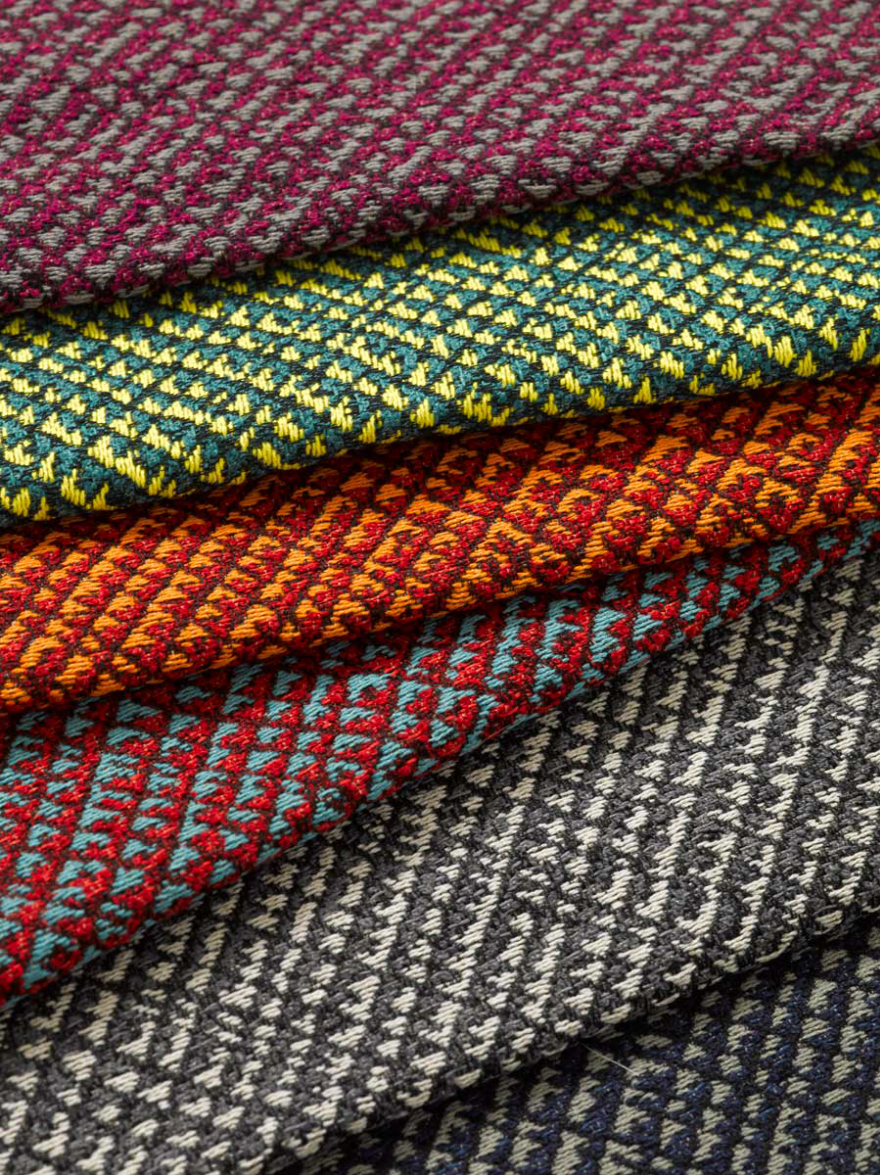 The Lagos upholstery pattern is based on Akwete cloth, a hand-woven textile from Nigeria.

As an architect you have used pattern extensively in your facades—was it liberating to get to use color to a much greater extent in these textiles?

Absolutely. For me, the colors are also an expression of the kind of context that I was looking at. So there's a whole range of what I call mineral tones—for the wallcovering and certain drapes and fabrics—which was very much about different kinds of earth, different iron and magnesium contents in earth, which you see on the continent so readily. Or different pigments of sand, from the red in Namibia to the yellow sands of the Sahara. And then you have the lush, tropic region where you have these deep greens—and also at the same time, what people don't always realize, is there are dense cities and very vibrant metropolitan junctions. So there's always this idea of a kind of non-static nature that I wanted in the patterns and the forms and the colors. There's a kind of vibrancy and movement, but it's not intense; it's not something that's supposed to trip you out. It's there as another detail as you go into it.

A lot of people were looking at the work and saying, "Wow, it looks very strong." And then we've shown them samples on the wall and they were shocked at how it recesses. And that's the whole thing—woven systems reveal different layers of tonality and color as you come closer and your eyes are able to adjust them, or they fade and melt into a composition that is more muted and subtle as you're in the environment.

For me, it's like being in the forest. You come close and the details are vibrant and verdant, and when you go back it visualizes into a really beautiful emerald green or dark brown-green. It's those kind of ideas. 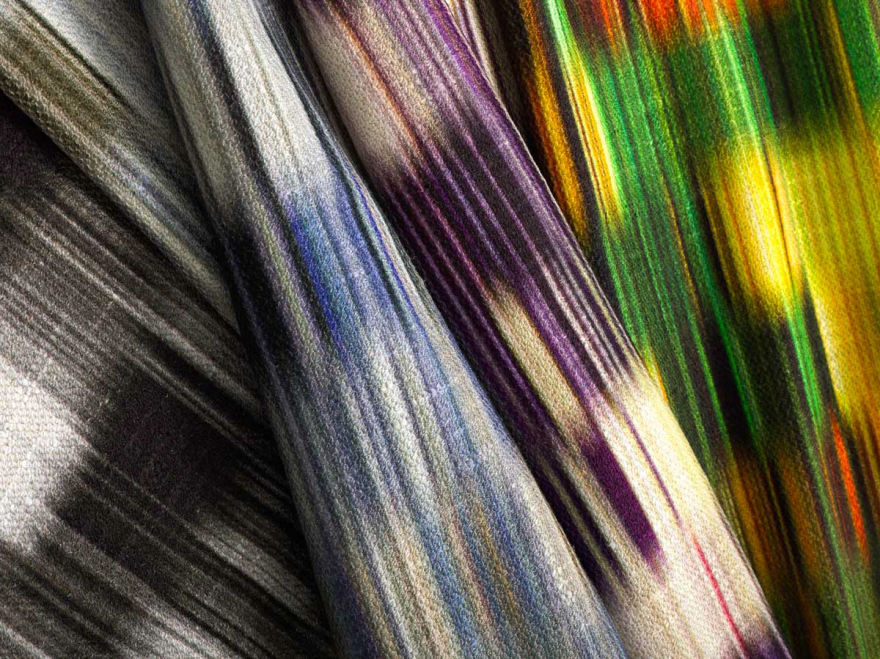 Aswan is a digitally-printed upholstery inspired by a traditional African kente cloth in the Cooper Hewitt's archive. 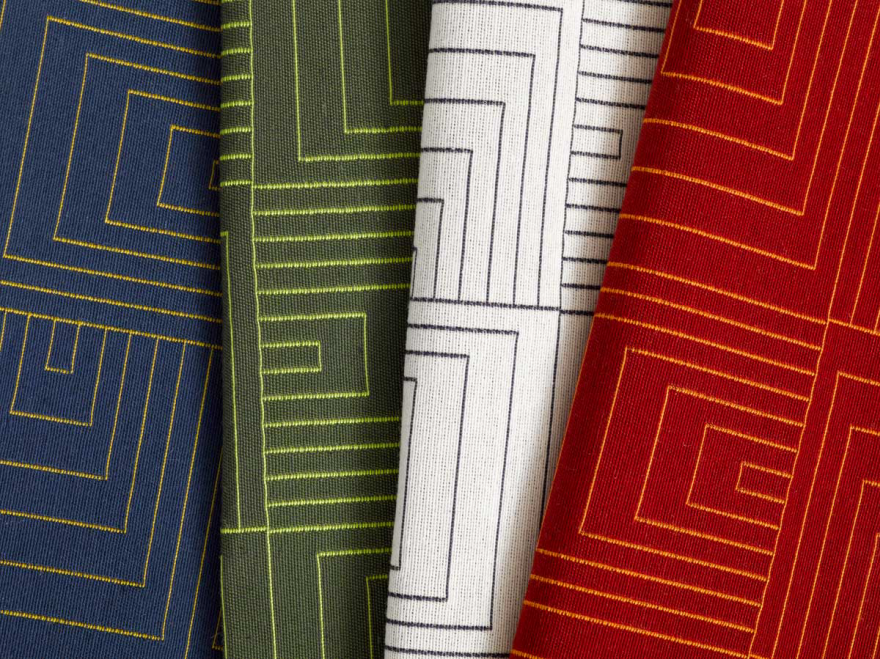 The Cairo upholstery is based on Adjaye's pyramidal line drawings. 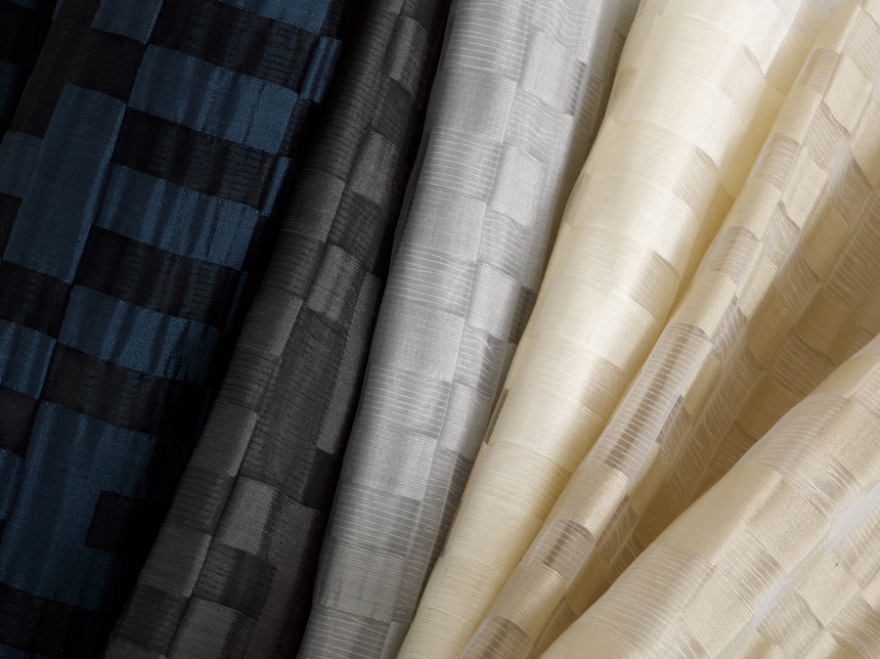 Dakar is one of two draperies in the collection; Adjaye's own artwork was used as a jumping-off point for this pattern. 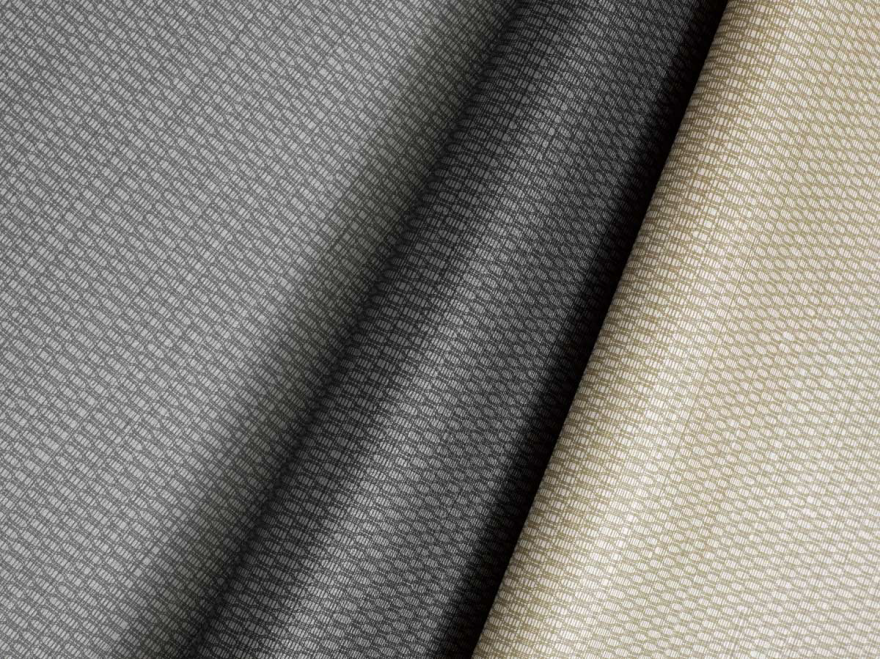 Harare is a PVC wallcovering based on the pattern of an Adinka wrapper from Ghana.

Was it hard to get the colors to look right?

Yes. Not easy. Dorothy is the woman with the wand. She has very deep relationships with these weavers, and she would come back and I would say, "Oh my god, that's incredible" or "It's the wrong tone." And they would find a way to bring it down or find another process. That's the beauty of working with a company like Knoll, which is amazing at this stuff, and working with someone like Dorothy, who's a master at this. She's really adept at reading the situation and knowing who in the world would be the right person to go to. That made it easier for me. Probably something that would have taken six to ten years for me to do has taken two years, which is incredible.

Some of the patterns are from your own drawings and artwork. Are you the kind of person who is constantly drawing patterns, and do you come to pattern from that approach? Or is a more considered, research-based process?

Yeah, it wasn't from a catalogue of patterns that I had been working on—it was much more from the research. As I started to think about what I was trying to do, for instance with the Aswan pattern, which is this incredible digital print, this sort of blurry, pixelated thing—I was thinking about kentes, and what would a kente be now with the technology we have? So it was about, one, blurring the image, to deal with a kind of inability to pinpoint exactly where things are, but then also structuring it with a pixelating system, so that it became grouped into different stacks.

Is there one piece from the new collection that is most special to you, or where you feel like you pulled off something that you're most proud of?

For me, I'm very much a fan of collections and of archives. So it's a body of work—each one relates to a body of work, these nine systems, that give you a clue to what I've been thinking about in my mind. So I don't have any favorites; to pull out a favorite would dislocate it in a way that doesn't make sense to me. It's really about a body of nine systems that gives you a window into understanding inspiration from nine parts of the world.

David Adjaye Selects is on view now through February 14, 2016, at the Cooper Hewitt, Smithsonian Design Museum. The Adjaye Collection launches this September from KnollTextiles.

David Adjaye on His New Line of Textiles for Knoll