Beyond Function: 'Print Shop' by UM Project at the Museum of Art and Design

When thinking of mechanical objects, we don't often consider their beauty as much as their basic utility; bulldozers are rarely described as elegant and table saws are prized more for their ability to effectively cut wood than their grace. Despite this underappreciation, there have been a number of designers who make a true effort to engineer objects that are not only beautiful, but also honor the elegance of the relationship between design form and mechanical movement. Take for example, Theo Jansen's ethereal beach walking 'beasts' or Bruno Munari's 'useless machines,' some of the first physics-based mobiles to be invented.

François Chambard, the Brooklyn-based designer and founder of UM Project, carries on in a similar spirit in the Print Shop print studio installation currently on view at The Museum of Arts and Design in New York City. 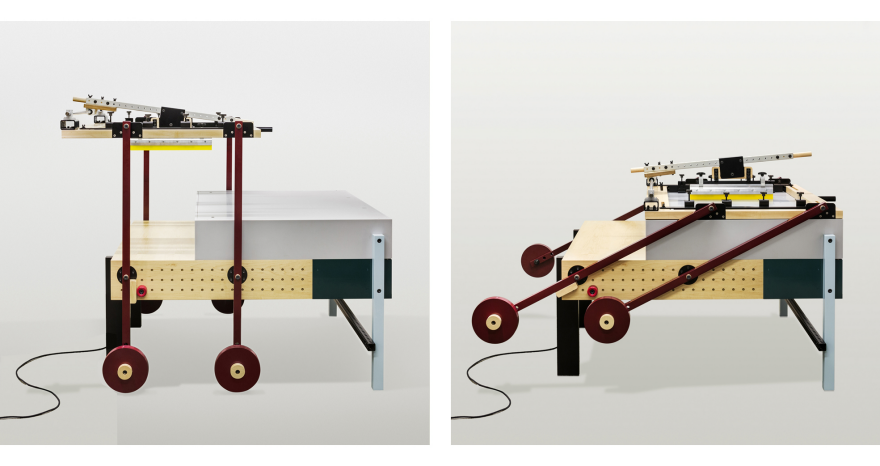 UM Project's interpretation of a manual printing press for 'The Print Shop.' All images courtesy of Francis Dzikowski/OTTO

Known for projects that involve a hybridization between art and design like his Constructivist theremins, François Chambard's involvement with the Print Shop exhibit is what gives the installation a unique angle. When invited to collaborate with MAD on an exhibit surrounding printmaking, Chambard started to brainstorm how to emphasize the act of printing itself while also encouraging interactivity. "When they approached me they wanted something that worked really well functionally but was also really cool to look at," says Chambard. "Print presses are, I guess, not [visually] interesting enough and they wanted a way to have some kind of machine that's a perfect hybrid of art and design or craft and industry." 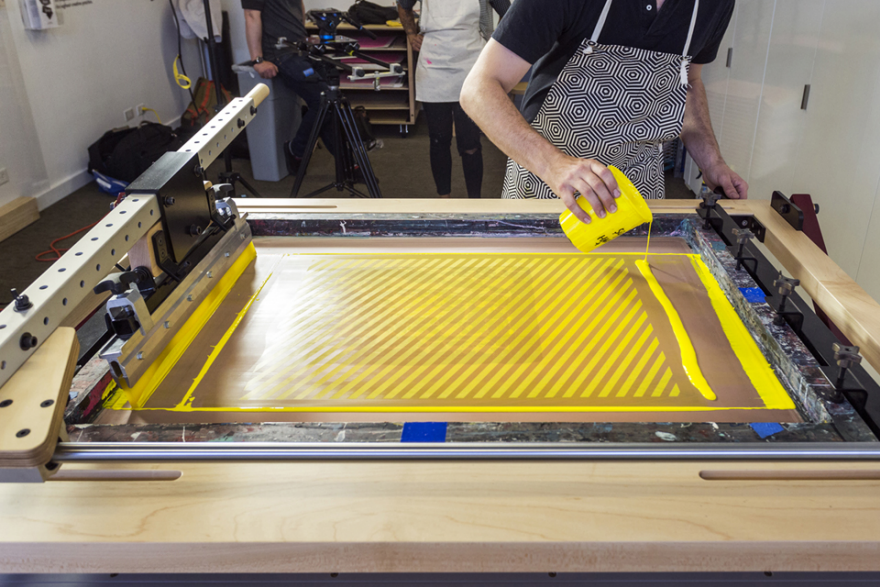 The printing press in action.

Initial ideation as well as some advice from printmaker Karl LaRocca of Kayrock Studios brought him to his final design — a reinterpretation of more industrial German parallel lift tables. The printing press is meant to be used by those visiting the exhibit, and not only incorporates beautiful graphic form, but also considers the potential for tactile pleasure when using a manual screen printing press. While industrial parallel lift tables often incorporate complex hydraulics, Chambard's design operates using a simple disk system that counterweights the action of bringing down the screen to the table. The carefully considered mechanics of the design make for easy and satisfying movement, resulting in an effortless feeling of weightlessness when the screen is lifted from the table.

Chambard notes that his design work is, "always about finding this kind of third way, which is not industry or craft but instead something in between. So basically, it transcends both the quality of the handmade and the quality of the mass-produced." Based on the reactions of both professional screenprinters and less educated visitors who all interacted with the printing press, its utility does indeed transcend the simple joy of printmaking; the machine is in its own way a form of visual poetry, a graphically bold celebration of printmaking's rich history and overall process.

'The Print Shop' will be on display at the Museum of Arts and Design until October 11th.

Beyond Function: 'Print Shop' by UM Project at the Museum of Art and Design