After many years of development, rumor has it that Martin's first commercial jet-pack is to hit the market next year at $150,000 a piece.

Considering the onslaught of incredible inventions that the march of modern technology has unleashed on the world in recent years, it is perhaps surprising that dreams of the sci-fi staple jetpack have failed to come to more fruition. Of course, we've sat in wonderment at spectacular water jet variety, but ambitions of a practical strap-on flight device remain elusive.

Well, that was until last week when jetpack pioneers Martin showed off what they believe to be the world's first practical commercial jetpack, suggesting that the machine could be available for purchase as soon as 2016. 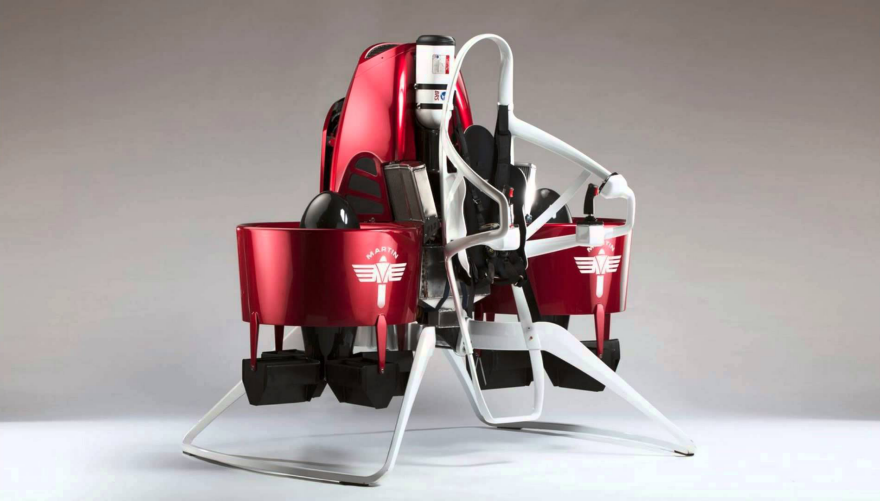 Of course, we've been watching Martin Jetpacks with interest for many years – with not too dissimilar claims of market-readiness having been made before. After decades of research which began with the company's founder  Glenn Martin, recent video releases now do seem to suggest that jetpacks could be a not to distant reality.

Made from carbon fibre and aluminium, the latest Martin—in a marketable, aesthetically considered anodised red with bright white frame—employs a 2-litre petrol engine to power two powerful fans that can apparently see pilots reaching heights of 1000 metres, speeds of over 70km/h and airtime of up to 30 minutes.

Seemingly playing down the millionaire boy-toy market potential (and lets face it, it's not quite as sexy as the fictional back-pack sized versions), Martin execs suggest they have their sights set on emergency service providers (with hilariously faked promo video scenarios to prove it). With vertical take off and landing, the company are betting on the ability of the jetpack to operate in tight spots where other rescue vehicles can't reach.