Occupation: I recently signed on as the chief creative officer of LR Paris, a 50-year-old promotional product and custom gifting studio. My background is in industrial design, focused in home furnishings. So it was a bit of a leap for me to come and oversee a company that does a lot of corporate gifting and quite a bit of small goods and accessories. But I really wanted to bring my aesthetic and my design approach to a different world. I oversee basically everything that's going out the door with LR Paris's name on it, from branding work and sales collateral to the actual products and concepts that we're designing. 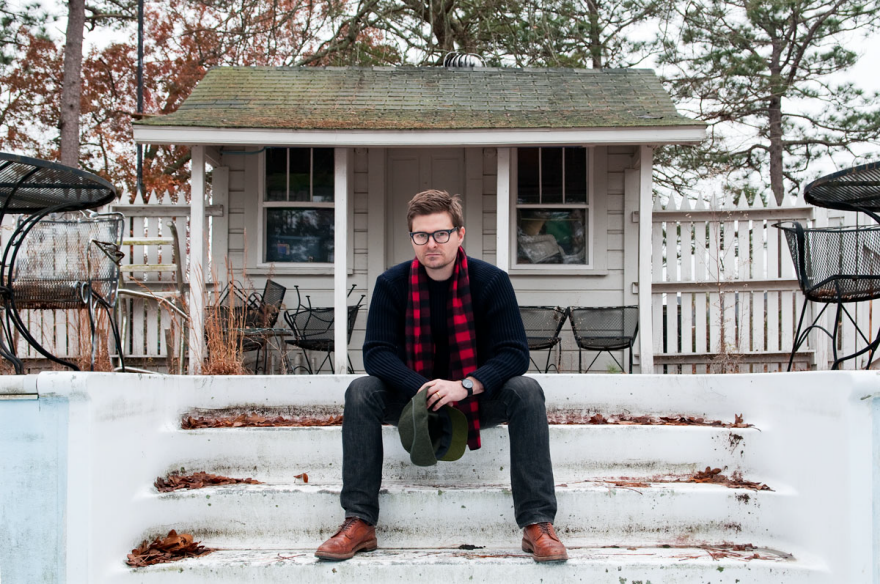 Current projects: Although quite a few of them are confidential, we have ongoing relationships with clients such as Harry Winston, the White House and the Guggenheim, to name a few. And our projects really range from consumer goods to complete brand experiences. A couple of specific projects I can mention are a line of products for the Baccarat Hotel that recently opened in New York, and a new gifting program for Wells Fargo.

Mission: The world of promotional products is a $20 billion industry. But right now, for so many companies, it's an afterthought. They'll spend a lot time on their websites and their consumer-facing establishments, but then they'll buy a beer koozie and put their logo on it. It's completely off-brand. So we really want to reinvent how CMOs and their companies are spending their dollars. We want to give them more value, and we want to make them more design-conscious. 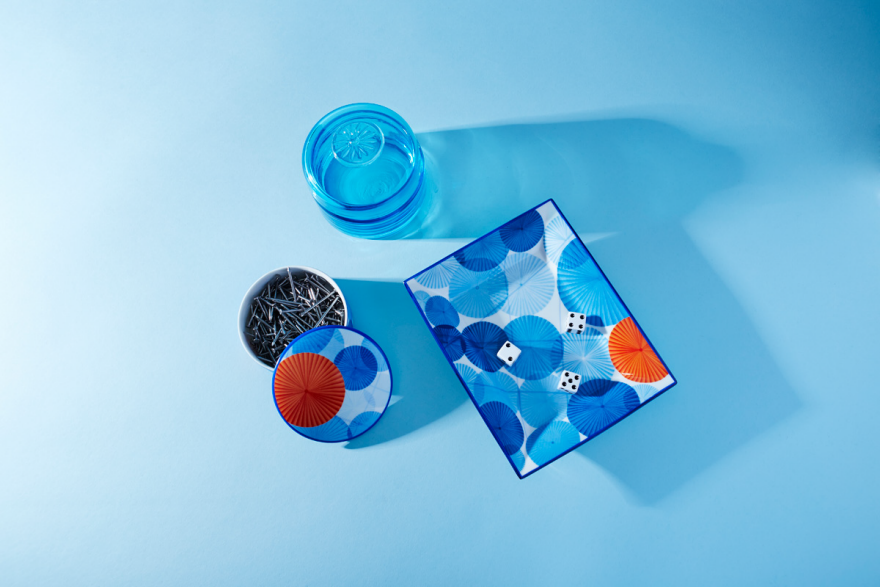 Above and below: some examples of LR Paris's small goods and accessories 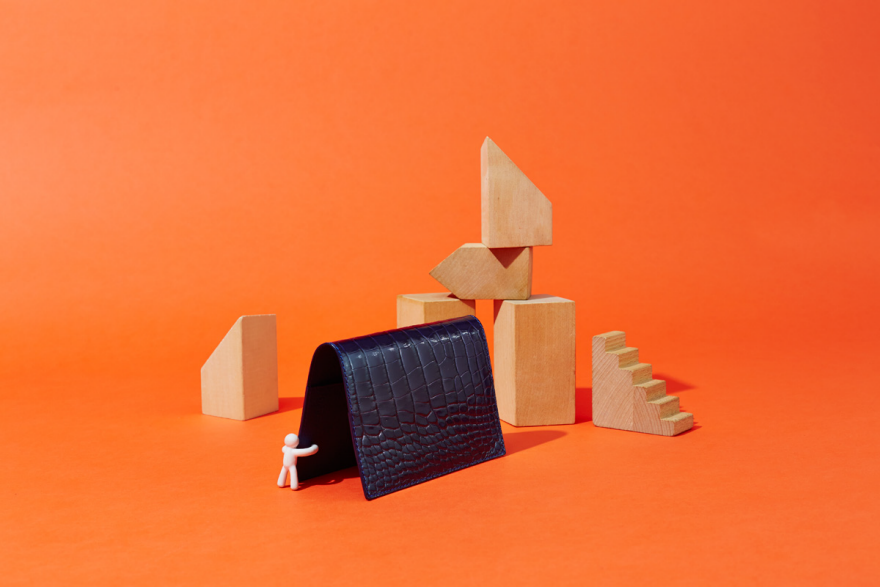 When did you decide that you wanted to be a designer? I've always kind of known. I went to school at the University of North Carolina at Wilmington, and I started out doing a double major in biology and fine arts. Initially I wanted to be a fine artist, but along the way I got more and more interested in building. When I was doing a lot of painting, one of the most exciting parts for me was actually building and stretching the canvas.

Then it really dawned on me when I saw a Charles and Ray Eames exhibition at the Library of Congress in the '90s sometime. Seeing that show and their holistic way of thinking—where it wasn't just furniture but photographs and video and sculpture, and this cross-pollination of a lot of different interests—that drove me in the direction of design. There's a Massimo Vignelli quote that I really love: "If you can design one thing, you can design anything." I think design had a certain freedom for me—being able to work with a client, and having that co-design back and forth, could really strengthen the process and lead to something unique.

Education: After this realization, I shifted my focus at UNC-Wilmington to studio and three-dimensional design—that's what my degree is in.

First design job: Although I worked with some designers while I was still in North Carolina, I would say that my first real design job was in 2003 when I went to work for the Conran Shop here in New York City. I started in the buying department, so I learned, first, about Conran's hundreds and hundreds of different vendors from around the world. And I also started to understand the consumer mentality—what motivates someone to purchase something and how much the store layout can change the consumer experience. That was a huge learning experience and a really good jumping-off point for me.

Who is your design hero? Achille Castiglioni. He just had this very global way of thinking when he was putting things together. But one of his most important designs is a tiny light switch that's ubiquitous now; it's on probably half the lamps I have in my apartment. If you're ever in Milan, you have to go see his studio—he was a very, very inspiring individual. 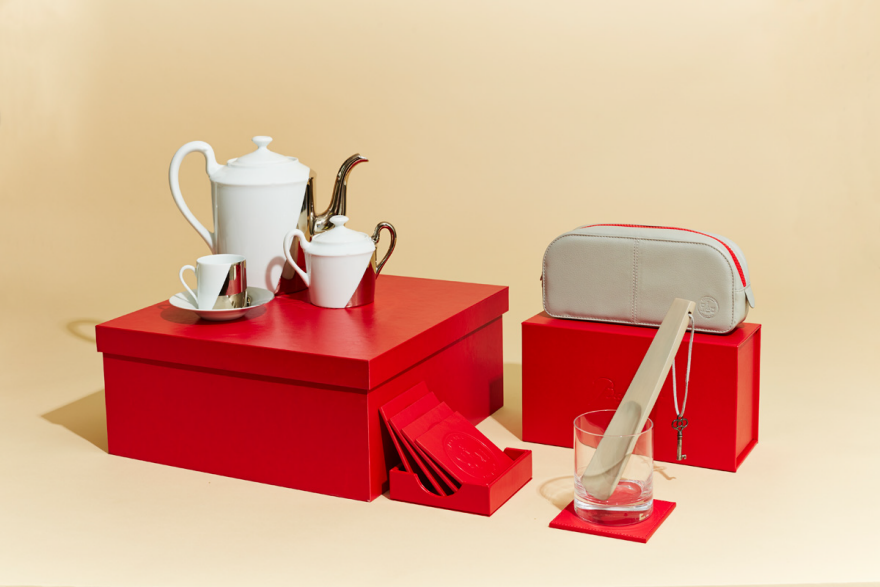 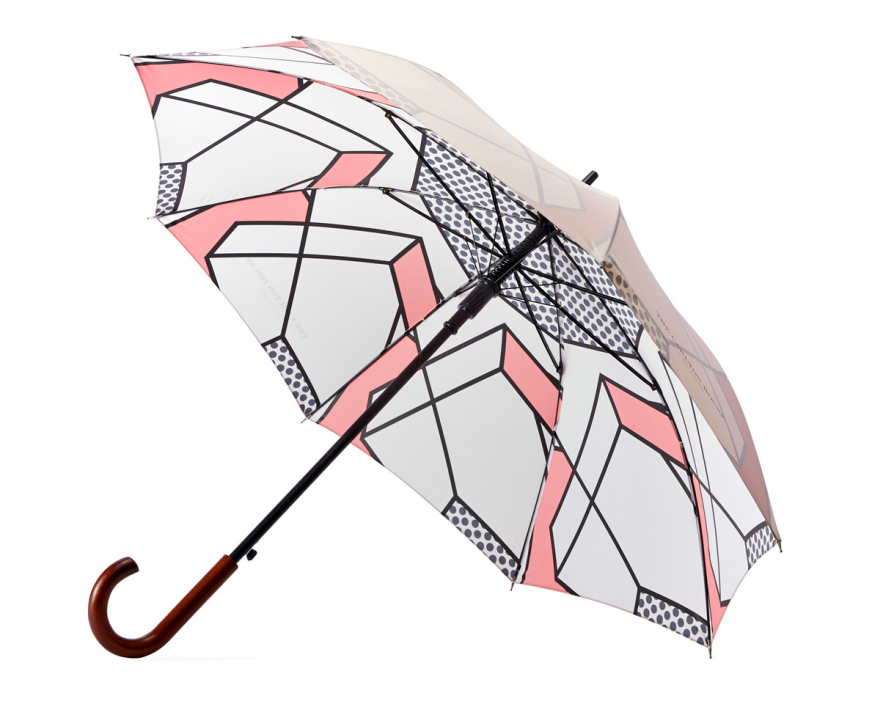 An umbrella by LR Paris for Carlton House 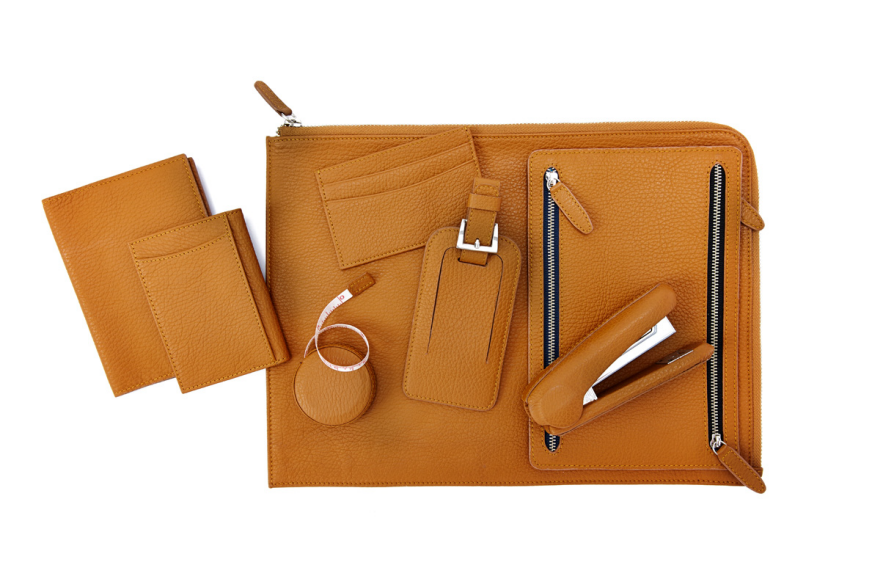 Describe your workspace: Very messy. Not only my desk but my computer desktop as well—there are way too many icons that are tattooed all over the screen. It's really in disarray. There are papers everywhere, there are samples everywhere—it just looks like a bomb went off.

Other than the computer, what is your most important tool? The computer is very important, but I think for me it's just the whole process of brainstorming. I really like to work from a conceptual standpoint, and once you have a really strong idea, I think the form, the function and the typology of the object can be informed by that concept.

I'm inspired a lot by culture in general, and how objects are designed for one purpose and re-appropriated for something else. For example, one of the projects I've done was based on the milk crate, which is basically the most popular outdoor furniture in New York City. I like those cues that you get from everyday life. Just being a good observer is something that I find really key in my work. 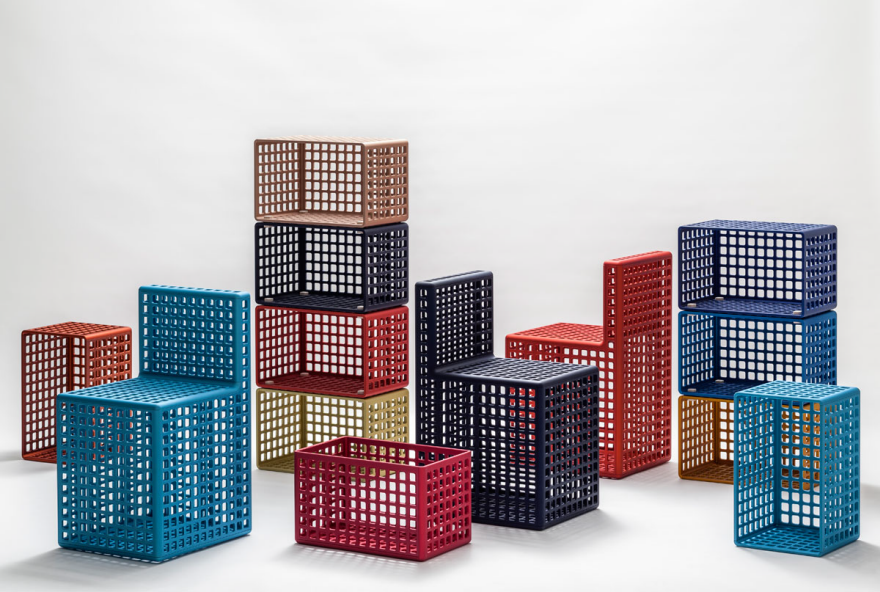 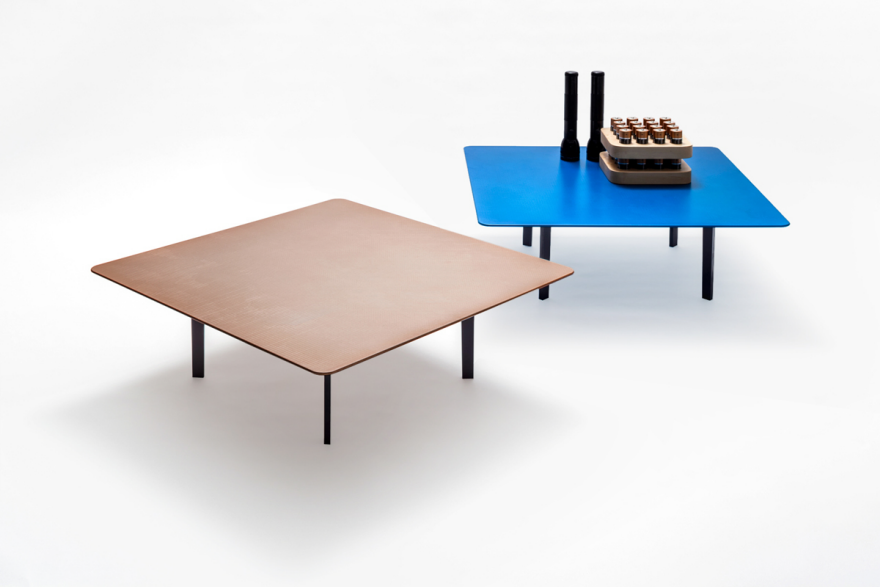 McSwain's Cumulus table, also for Off the Grid

What is the best part of your job? Well, every day is an adventure. As I mentioned, right now we're working with clients ranging from the White House to construction companies to luxury brands to museum stores. So every day brings something different in the door. That definitely keeps me on my toes. Sometimes you can feel a bit schizophrenic, because you're stretching in so many directions, but I think I've gotten good at pushing myself into problem-solving mode quite quickly.

What is the worst part of your job? That's probably the worst part as well. Tackling the corporate world, since it's very alien to me, is almost an educational process. Dealing with clients and trying to teach them how good design that's on-brand can really be a business driver. As I mentioned earlier, for so many companies it's an afterthought. They know they have to give something promotionally, so they just slap a logo on anything. But that's slowly changing. Obviously, if you look at a company like Apple and you see what they've done, there are definitely huge landmarks out in the corporate world for comparison.

How do you procrastinate? I just daydream, to be honest. Sometimes it's nice to sit and do nothing.

What is your favorite productivity tip or trick? Maybe singing in the shower. And cleaning. It clears my mind a little bit. But as I said, I'm pretty messy, so my wife and my colleagues are always on me about cleaning up. 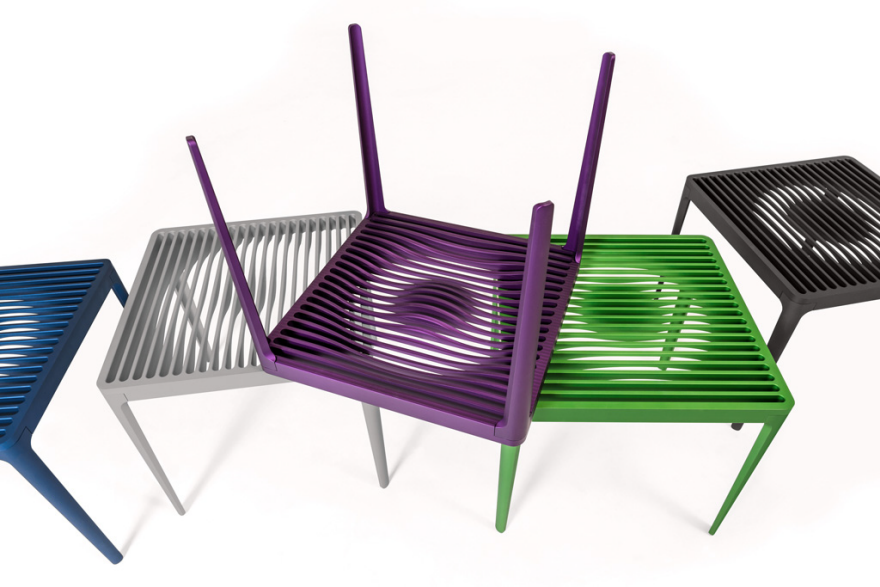 Turntable, a 2012 collaboration between McSwain and Brad Ascalon for Neal Feay Studio 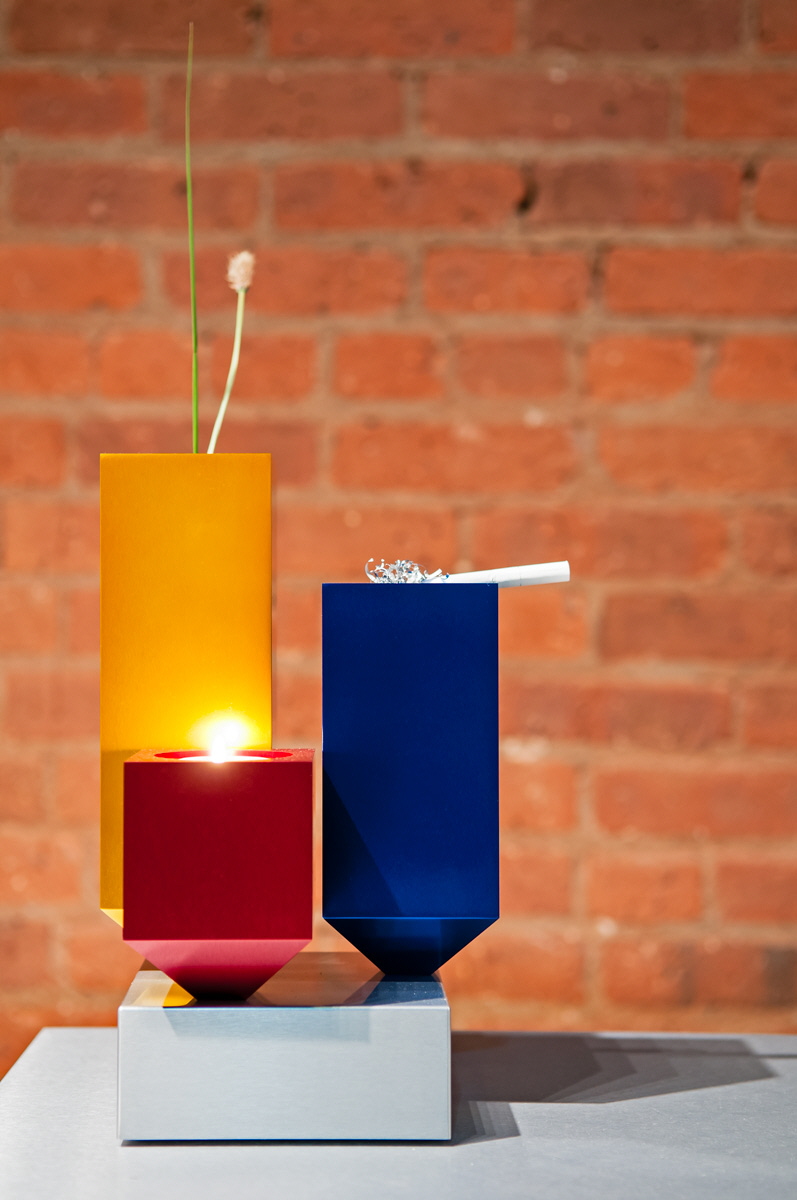 Lumen, a combination vase, candle holder and ashtray that also came out of McSwain and Ascalon's 2012 collaboration

What is the most important quality in a designer? I think being able to listen. Being able to put in the research and try to truly understand what your client is looking for. Once you know that, the rest of your job is much easier.

What is the most widespread misunderstanding about design or designers? Especially on the American market, I've noticed that design can be considered almost this add-on cost. Like you go into a store and there's a pair of scissors and then there's a "design" pair of scissors, and the "design" pair costs five dollars more. So I think people in general are a little skeptical of the word design, and they think it just means a higher cost. But obviously both pairs of scissors were designed.

What is your most prized design possession? I'd call it more a piece of art than design, but it's a turned-wood goblet made by an artist from North Carolina named David Sengel. It's all in wood, lacquered black, and there are hundreds of thorns on the stem. It's something I got in the '90s from the artist, and I've carried it around and babied it for 20-plus years now.

What is exciting you in design right now? I just think there's a renewed energy. The most recent New York Design Week, for example, was really spread out, there were so many events going on, and so many kids just out of school were so enthusiastic about getting out there and showing their work. The whole maker movement in Brooklyn, with people taking on their own small manufacturing—there's a renewed energy that's really exciting to see. Ten years ago, I felt like I knew just about everyone in the design world, and now there are so many new faces and new voices. It's really inspiring for me to see this next wave of creatives coming up.

This was the latest installment of our Core77 Questionnaire. Previously, we talked to Incase's VP of brand and creative, Moses Aipa.