Is it just me or is Squarespace everywhere you look these days?

As if the sheer proliferation of the distinctive image-rich and luxuriously white-spaced templates wasn't enough, it seems that barely a podcast was recorded in 2015 that wasn't brought to you by the site. Flying high on investor capital as the race for the killer website-building tool heats up (other service such as Wordpress and Wix competing hard) the brand has recently also been going after the mainstream with adverts on TV screens—even ascending to the realms of the superbrands with their own esoteric Superbowl commercials the last two years running.

When Squarespace came along and blew other competitors out the water with its seductive styling, product designers the world over rejoiced at finally being able to quickly and easily make homepages for their portfolios and projects that projected an aesthetic of professionalism in keeping with rest of their work, with little or no working knowledge of HTML or CSS.

As the tools' popularity proliferates however, is this illusion going to fade? Is what once seemed like refreshing, cutting-edge web design, now starting to seem common, clumsy and unconsidered? As more users pile in to the backend, is the dream of WYSIWYG website building feeling more and more like page-loading water-torture? Like so many internet phenomenons—could Squarespace become a victim of its own success?

Coding your own: Worth the investment?

Whilst a large portion of the debate centers around coding functional things like apps and arduinos—what about the humbler ambition of learning to code your own web presence? Most designers have a basic understanding of HTML and CSS, is it worth investing in taking these skills to the next level?

Skeptical of the trumped up hype surrounding coding, I've tended to sit somewhere on the fence of the to-code-or-not debates—harbouring a quiet jealousy for those that can create with code on the web and beyond, but doing little about it. It was only when I opened an agency last year, and was faced with the prospect of building a credible website on bootstrap budget (baulking at resorting to overused templates for something that felt so significant) that I resolved to take the first steps to learning to code.

If there is one thing that's grown as quickly as website building tools over the past decade, its services offering to teach you code. Whilst there are a lot of great free or cheap online tutorial services out there, these services can take vast amounts of time and determination to make any progress and I knew that I would need something much more immersive and intensive if I was going to realistically crack code learning. I signed up for a front-end development course (i.e. HTML, CSS and Javascript) with real-world coding school Steer in London, booked out the week out of office and took the plunge.

Any cynicism I felt for coding dissolved away within minutes. Having left design school years ago, it was an enormous pleasure to return to an education environment and feel the thrill of learning something completely new. Thanks to some very enthusiastic teaching (cheers Sam!) and being lead through some very real-world tutorials, I was soon building serious things  that I would've been proud to put online. In fact, part of me wondered whether school couldn't have been more like this in general; a small group of motivated people, learning a practical and applicable skill with teachers that really want to see you master it.

So was it worth it? After five days of enjoyable but intensive learning I'd caught the bug and felt equipped to build a credible new homepage from scratch and break free from templates that I'd felt were holding me back. Of course, now I want to tear it up and start over entirely—but that was always the fun of portfolio making wasn't it?

Whilst I still have no ambition to be a fully fledged web-developer, it's so inspiring and empowering to now know (having worked with both templates and developers) I can now bash together a respectable homepage for any future project at little cost and to my own design. 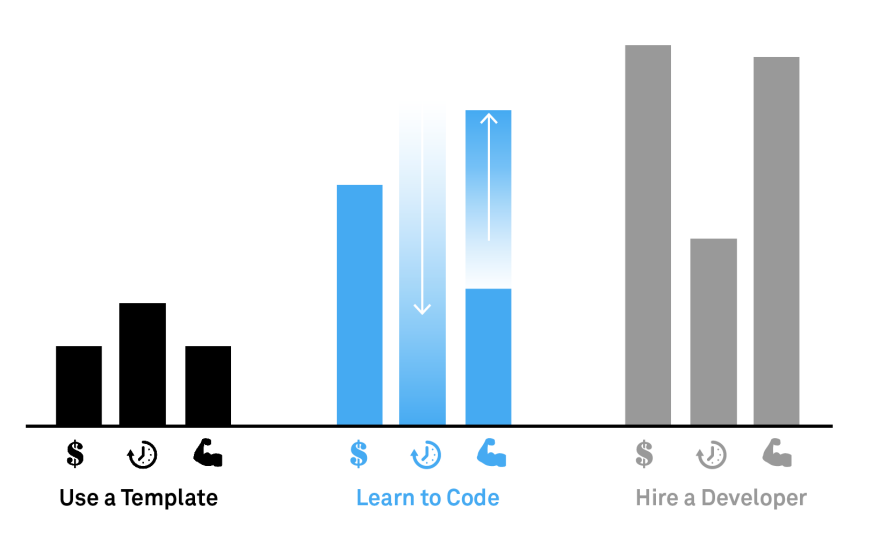 Very rough Cost, Time and Building Potential anlaysis: Time investment of learning may be high but it decreases with time as you get more confident. With so many resources readily available to teach you more, your skills can develop rapidly after you find some level of proficiency

For any designer out there sitting on the fence like I was, wondering whether the time might be write to dip a toe in web development, I can offer up five lessons I've learned from the experience that might help.

If you've got some experience with computers (you probably wouldn't be here if you don't), can find a good teacher and are used to hacking a little bit into code behind a blog or portfolio like I was, you'll find that learning the foundations of HTML and CSS needed to begin building your own sites won't be too much of a stretch at all. In fact, it's something of a relief when someone finally explains what all that HTML you've seen around really means.

2. If you're a designer, you're half way there

On the coding course I took, I felt for people who didn't come from a design background as they struggled so much more with understanding layout and creating assets that they could use. If you're a whizz with graphics and used to working in Adobe you already have the building blocks—now you can fill in the gaps with code.

3. The learning potential is endless

As with anything, the more you learn, the more you know you don't know. At the end of a five day course I could see the enormous iceberg beyond the tip I'd stepped on to. Don't let that put you off though...

4. There's so many great resource out there

Heartwarmingly, there's an enormous community waiting with outstretched arms to welcome you to the coding fold and share a vast amount of knowledge with you. Once you've learnt the basics, you can then go out and search for resources you need to achieve what your trying to build. There's so much stuff out there it can be quite a challenge to filter out exactly what it is you need. Steer have helpfully gathered together some of the best ones.

5. It really does help you work with programmers

Even taking first steps into front end web programming has helped me understand more how programmers of all creeds work, how to communicate better with them and understand what I'm asking of them (sometimes moving something a nudge in one direction or the other isn't as simple as sounds!). You may never be a coder but the more confidence you have in the field the more you can achieve in your collaborations.

What do you think?

Do you have ambitions to code your own portfolio/project sites or are templates on the likes of Squarespace and Wordpress more than enough for your needs? Can industrial/product designers raise their game by learning to make websites from scratch?