With less than a year under their belt, NEW INC, the world's first museum-led incubator, launched a number of exciting collaborative projects from their founding class of artists, designers and technologists at Demo Day. By creating a shared workspace and professional development program under the auspices of the New Museum, NEW INC not only nurtures young creative entrepreneurs, but encourages collaborative projects between their members.

In NEW INC director Julia Kaganskiy's introduction at Demo Day, she mapped the landscape from which NEW INC has developed, noting that technology only accounts for 38% of current incubators in the United States. Arguing for a new diversity in tech, NEW INC is adding designers and artists into the mix. NEW INC holds the promise of expanding models and strategies for growing ideas at the intersection of art, culture, technology and business.

At this year's Demo Day, 19 projects were presented in a rapid-fire series of five minute presentations, sharing with a diverse audience of supporters, advisors and press the result of this year-long experiment in collaboration. As part of Kaganskiy's vision for the incubator, she calls for participants to "fuse artistic provocation with entrepreneurial spirit to enable ideas that make culture better." Although many of the projects launched at Demo Day are still seed ideas, their potential for changing the dialogue around art, commerce and technology are exciting.

Below, we chose five projects that might inspire or change your own approach to making. 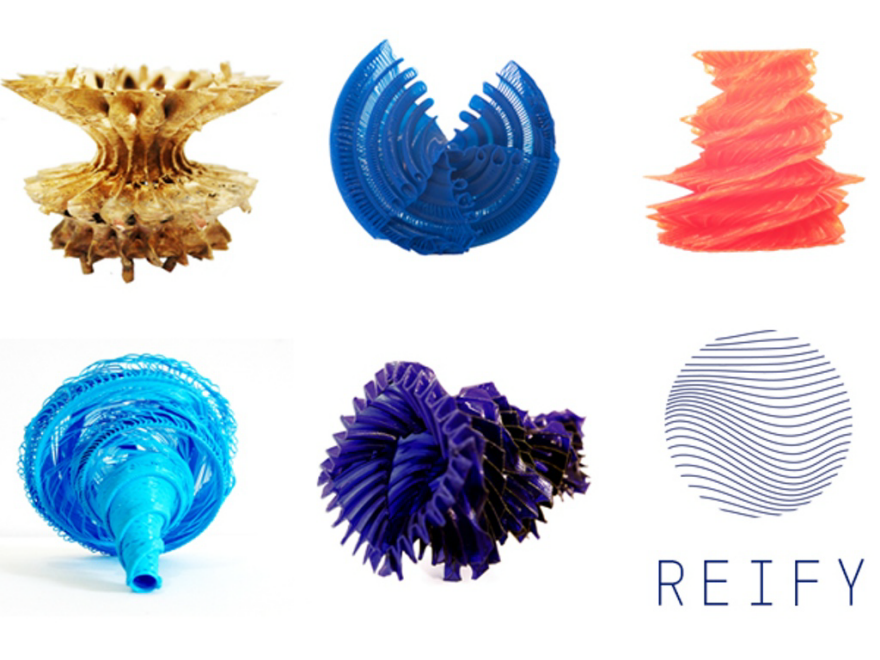 A small sample of possible totem forms, which are unique to the songs they represent.

If you could give a form to your favorite song, what would it be? Reify is a new music platform that wants to change how we experience music by transforming sound into a multi-sensory experience. Led by Allison Wood and Kei Gowda, the team has devised a proprietary method for digitally recording and modeling sounds, ultimately creating what they refer to as totems—small, abstract sculptures 3D printed in various materials (pictured above). Each totem is encoded with music and visuals which can be activated using a mobile app.

So far, Reify is one of the fastest growing of the New Inc. companies (with a brand new Kickstarter campaign) and we're very excited to see where they go—at the talk, Wood intimated that they are looking for ways to have the abstract forms become functional objects and are also pursuing a potential radio structure, with musical artists pushing new content to the totem from anywhere in the world. 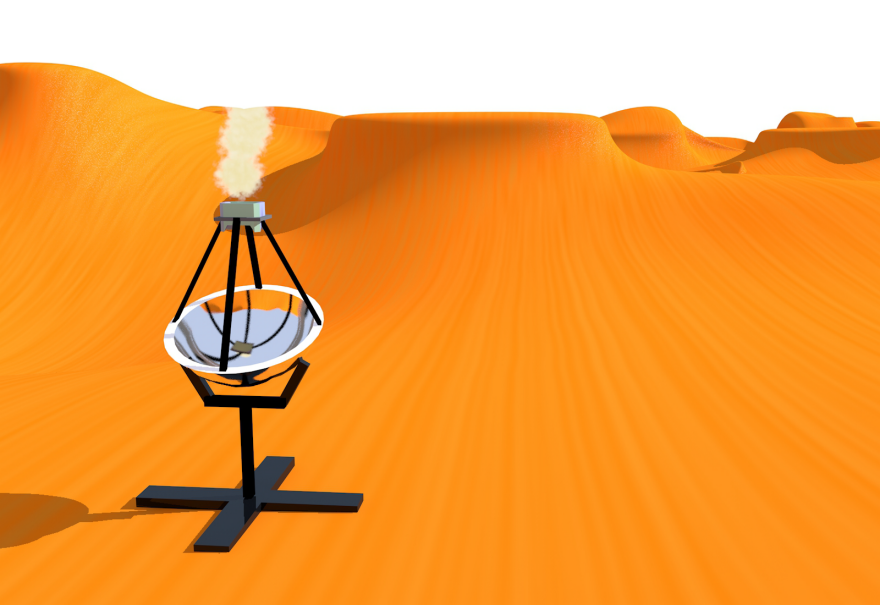 A rendering of the Solar Incense Generator

Working at the intersection of architecture, environmental science and technology, Yusef Audeh probes the contested Middle Eastern landscape. His projects investigate ancient Islamic devices and forms of knowledge and interrogates how they might be applied to serve contemporary and future energy needs. One of his earlier projects, the Machine for Raising Water, devised a small-scale hydraulic technology system in the Nile Valley based on the 1000-year-old irrigation device designed by Medieval engineer Al-Jazari. Yesterday he presented the Solar Incense Generator, a project exploring the material culture of incense burning, a practice which dates back to 2000 BC. Audeh recognizes that "incense processes, old and new, have been linked to the production of toxic benzene, hydrocarbons, and respiratory cancer." Alternatively, his work seeks to honor the ancient ritual today by "imagining a ceramic, clean-burning incense steamer that is powered by solar energy."

Can a popular game provide insight into how we see color? Specimen, a new color perception game, came out of a creative collaboration between motion graphics designer Erica Gorochow and iOS engineer Sal Randazzo. The two took on the challenge of designing their first game as a way to expand their skillsets and "scratch personal creative itches," Gorochow shares. After basic prototyping, fellow NEW INC-er Charlie Whitney came on board to focus on the organic physics of the game. The team proceeded from animated simulations to dynamic prototypes, refining the gameplay mechanics over the course of the year. As Gorochow stated during yesterday's presentation,"You can't fake fun." Friends were invited to beta test and the genuine reactions encouraged the team to release the game into the wild. Specimen was exhibited at KillScreen's Two5Six festival and was launched yesterday through the iTunes app store for Demo Day. 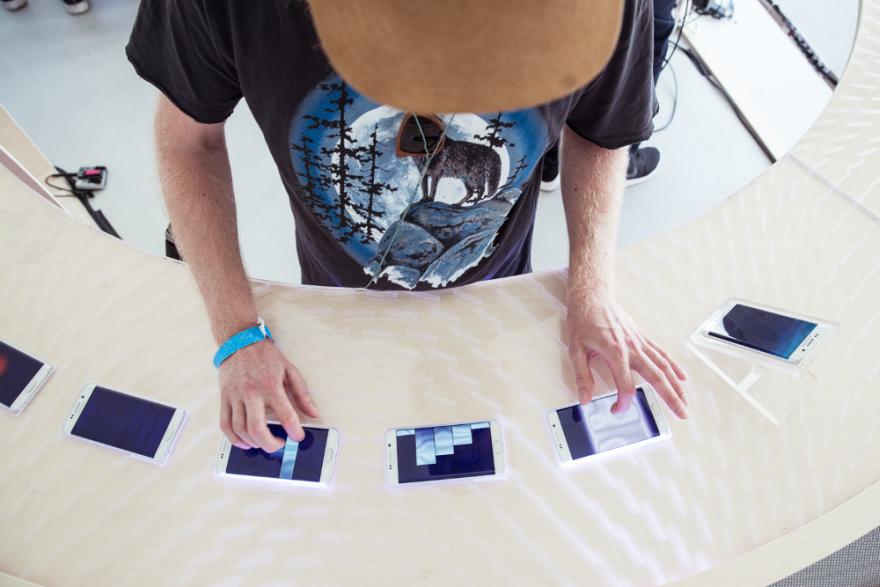 Mobile synth for "Edge of the Universe"

The NYU ITP graduate has a long history of using machines and new technologies to upend certain fundamentals of music. Her Well-Sequenced Synthesizers codes music theories into machines to create a new musical language. Take "The Counterpointer," (above) described as, "a cross between and electronic arpeggiator and a baroque music rule book." Using the rules of counterpoint, a user can compose a melody with layered sounds. Pereira's most recent project, "Edge of the Universe," explored the future of mobile synthesizers through a live performance at the New Museum. Part of the team Odd Division, Pereira created a modular and interactive instrument using 18 Samsung Galaxy S6 Edge phones. Swedish electronic pop darlings Little Dragon performed on this "mobile synthesizer," integrating NASA recordings of space into their songs.

A new way of seeing space and time, by Satellite Lab

The team at Satellite Lab started their presentation with an evocative question we've likely all pondered before: What if you could stop time? Well, it turns out they might be onto something. The team is exploring new forms for filmmaking through their newly patented technology that might radically change the way we envision the world around us. As founder Carlo Van de Roer explains, the system uses "a high speed cinema camera to arrest a moment of time and light sources moving at over 10,000 feet per second" which "creates the ability to control the movement of light sources and the movement of the scene as independent variables, offering a new way to control the representation of time and space."

The NEW INC showcase, which includes nine collaborative projects, will be on view at Red Bull Studios New York, located at 220 W 18th Street through July 30.