How simple design interventions can revive a city's streetscape

The High Line underscored a simple truth that permeates every city: good public space tangibly generates better quality of life (and extra zeros on nearby real estate). But while many cities are scrambling to transform their own abandoned railways into parks, San Francisco has been quietly revolutionizing its sidewalks with a wholly different tactic: smartly-designed compact public areas called 'parklets.' INTERSTICE Architects' Sunset Parklet (pictured below) is just one of dozens that are quietly reshaping San Francisco's streetscape. 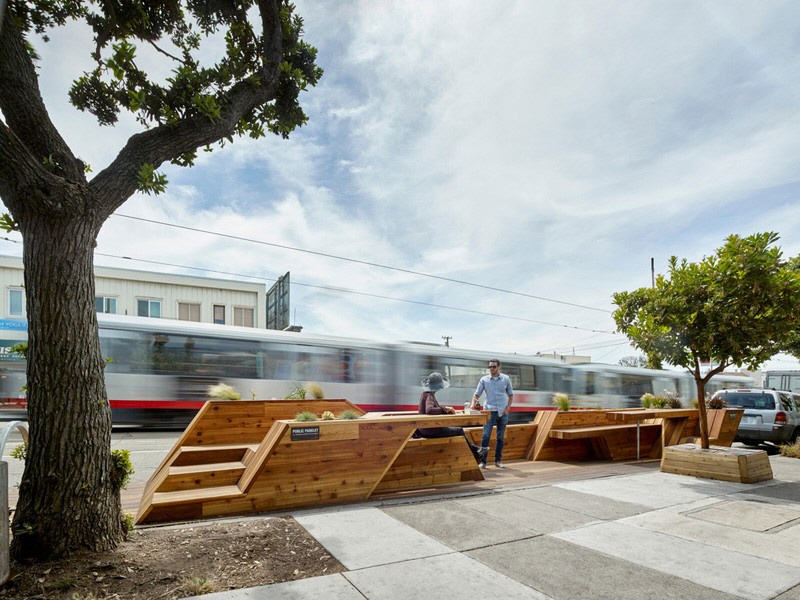 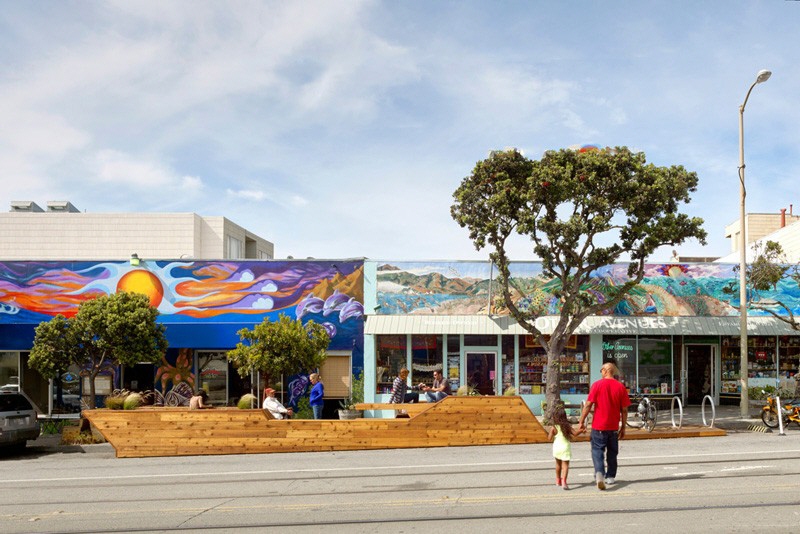 View of parklet from across the street. [Photo by Cesar Rubio via Contemporist]

The first parklet was more art intervention than design project: in 2005 the design studio REBAR dumped sod onto a parking space and planted a tree, creating a small patch of greenspace among the concrete and asphalt. While the intervention was temporary, the idea behind it took root (pun intended). In 2009—the same time the Highline was opening—San Francisco began its Pavement to Parks program dedicated to taking advantage of its unused streetscape. By 2010, the city welcomed its first official parklets, now sanctioned elements of the city's urban design toolkit. Each parklet is temporary, typically lasting a few years, during which time the city studies its impact on traffic and the lives of residents. But what goes into a good parklet, exactly?

Quite simply, it works to transform the local community from mere bystanders into clients. The process begins when the city issues a request for proposals with a particular site in mind. Once a design is selected, it undergoes an extensive period of public outreach, public hearings, design iterations, and government approvals before construction can begin. The Sunset Parklet seen here, occupies just 2.5 parking spaces outside a grocery store and café near Golden Gate Park. It crams multiple amenities useful to residents and nearby businesses—lounge chairs, dining tables, planters, bike parking, dog watering area—into an undulating wooden landscape only 50 feet long and only 6 feet wide. 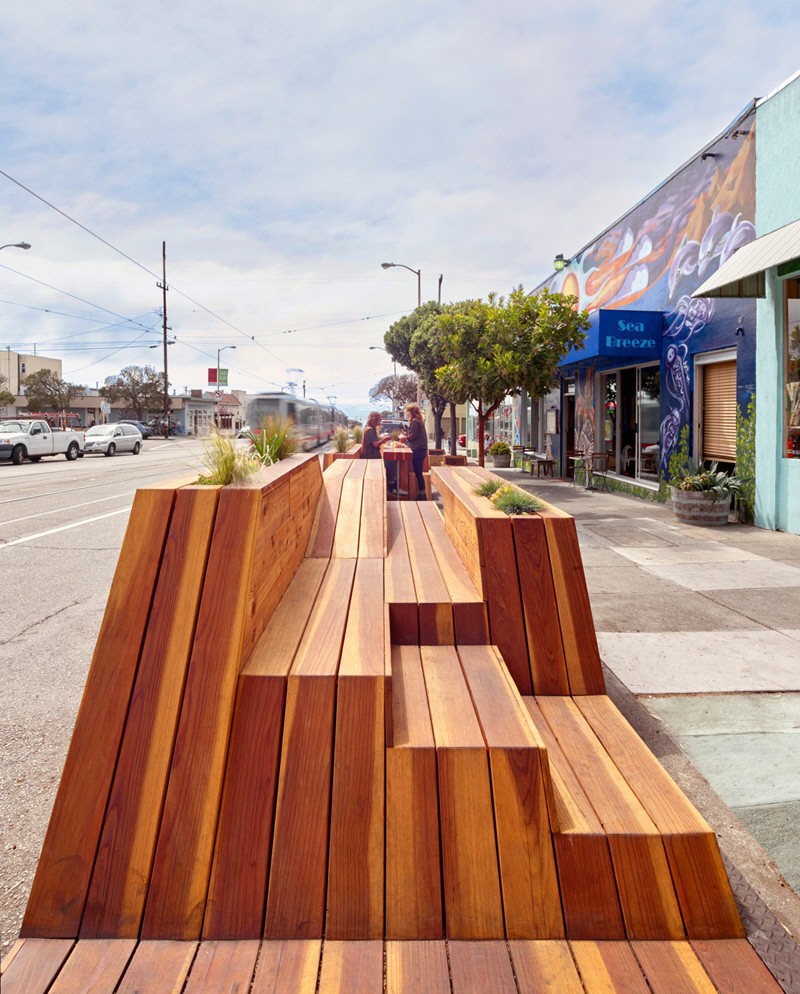 The design seems to emerge directly out of the street. [Photo by Cesar Rubio via Contemporist]

The Parklet's sculptural form was, according to the designers, inspired by San Francisco's topography: the design features four parallel strips of wood that rise and fall as if they were streets lifted from the city's rolling hills. The strips are initially flat where they host bike parking but quickly become a landscape of angled surfaces for eating, relaxing, and playing. The city's department of public works asks for sustainable designs and the Sunset Parklet is no exception: it was constructed of recycled and reclaimed materials. 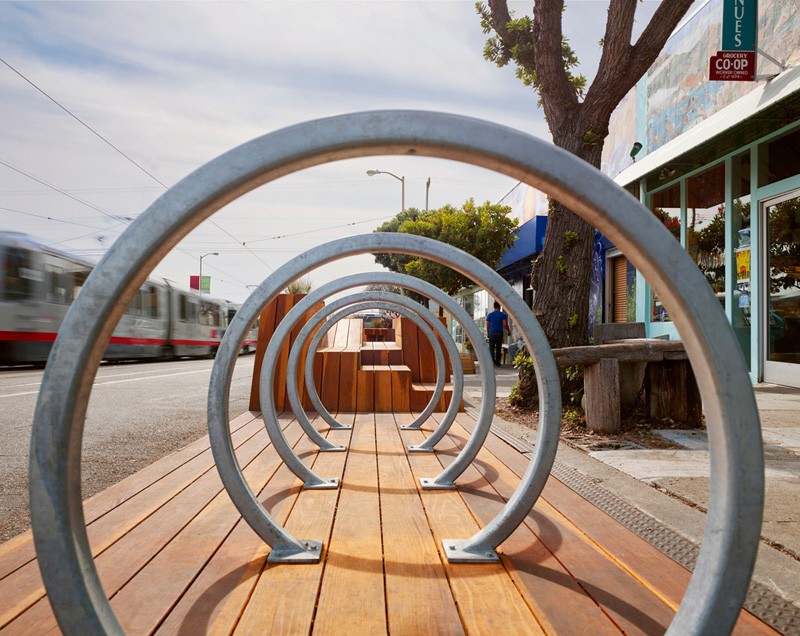 [Photo by Cesar Rubio via Contemporist] 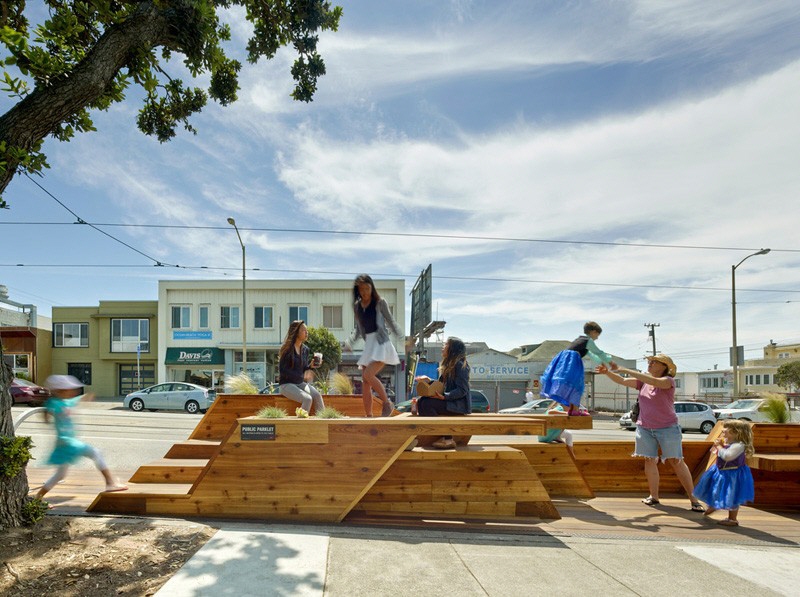 [Photo by Cesar Rubio via Contemporist]

Despite the hurdles each parklet represents—in addition to the approvals process, the funding for each project must be raised by local residents and businesses—the city has seen over fifty parklets built in the program's five year history. Perhaps not all new public space and amenities comes from fortuitously-discovered railways?

I'm a writer and journalist with a focus on art, architecture, design, and cities.