The quest for YouTube virality is putting human lives in danger 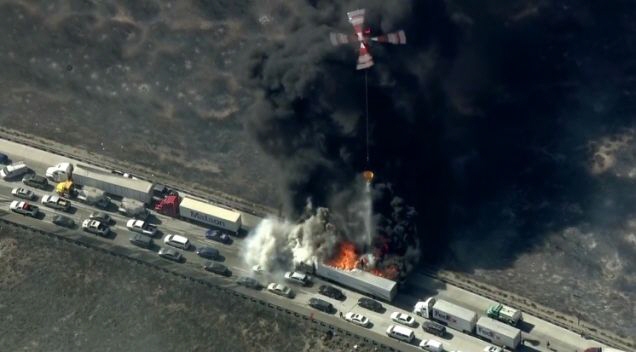 Earlier I bitched about self-entitled folks taking photographs to the potential detriment of others. But this is way, way worse.

On Friday a wildfire broke out in California. Unfortunately for a group of motorists stuck in traffic, the fire happened to intersect with the 15 freeway:

Once it hit the freeway, the blaze actually set an estimated 20-30 cars aflame:

When traffic is jammed bumper-to-bumper and the fire trucks have a hard time reaching the site, there's a firefighting protocol: You send helicopters and airplanes to dump water onto the conflagration. However, in this case no less than five a**holes decided to deploy their camera-equipped drones over the scene to record it, presumably in the hopes of posting a viral YouTube video. There's another protocol, this one aviation-based, dictating that when drones are in the area, you cannot deploy aircraft, for safety's sake. NBC quoted the U.S. Forest Service's John Miller to explain why:

Luckily no one died—people wisely got out of their cars and fled as they spotted the wildfire approaching—but CNN puts a finer point on the hazard the drones posed:

The 15 to 20 minutes that those helicopters were grounded meant that 15 to 20 minutes were lost that could have led to another water drop cycle, and that would have created a much safer environment and we would not have seen as many citizens running for their lives.