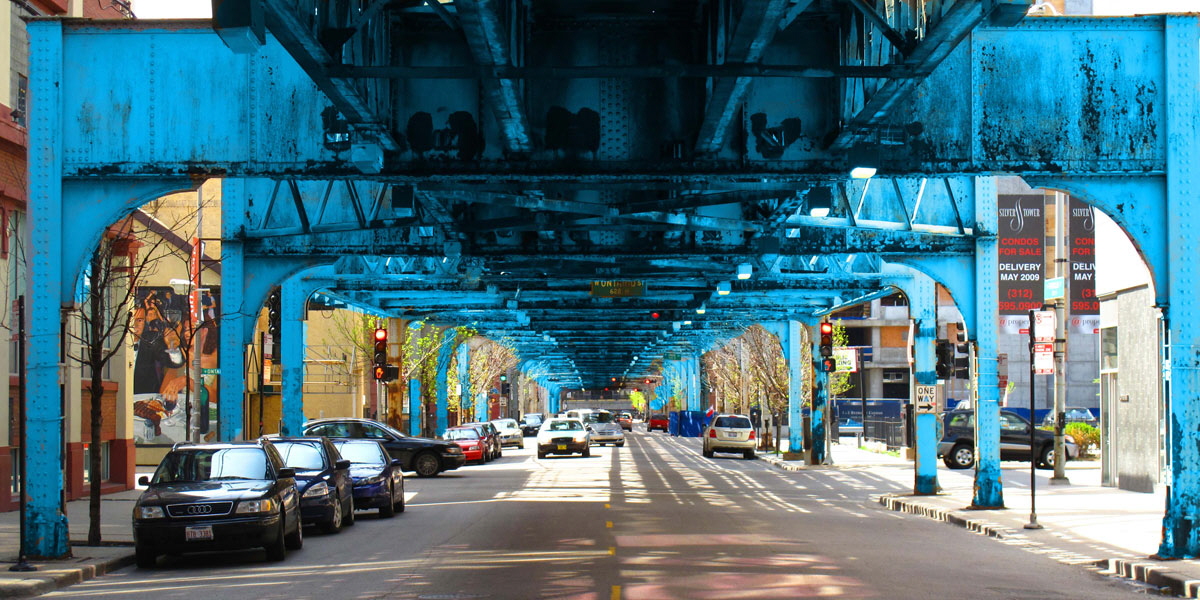 It's been a while since a public-art project on Kickstarter held our attention, but The Wabash Lights initiative has us looking up. The ambitious site-specific installation—the brainchild of two creative Chicagoans, Jack C. Newell and Seth Unger—aims to convert a stretch of elevated train tracks in Chicago into a programmable light show using more than 5,000 LED tubes.

Newell, a writer, director and producer, and Unger, a designer and strategist, began working on the project over four years ago. "It all started from a conversation we had about Chicago civic pride," Newell says. "We wanted to highlight something that was authentically Chicago that we felt was important but possibly overlooked. We turned our attention to the L, specifically the Wabash Avenue tracks. We wanted to create something that would transform the area by embracing and celebrating what was already there, as opposed to cleaning up or destroying the existing character."

The duo originally had ideas to paint the track a brilliant blue or red, but, after several iterations, they arrived at the idea of lights—teaming up with a lighting production partner, Intelligent Lighting Controls (ILC), to develop several different designs until they settled on their current approach. "Before we landed on our idea we asked, What is uniquely Chicago and inherently beautiful but overlooked?" Unger says. "How can we create an inclusive and unique public art experience? We weren't constrained by the medium—meaning we aren't light artists, so this very easily could have been 'The Wabash Quilt' or 'The Wabash Paint Job' or 'The Wabash Statute Garden'—if those had satisfied our interests." Fortunately for Chicago residents, Newell and Unger did not decide to build a giant quilt or paint the town red, opting instead for a serene, multi-colored glow along one of the city's most important arteries.

Their final design will use 520 light tubes, each holding 40 LEDs. The entirety of the installation is estimated to weigh only 9.3 pounds and to use 20,800 watts (175 amps) of power. Each light tube will be controllable down to 1.2 inches, with the ability to flash a range of colors and patterns. Once installed, Chicago residents will be able to program the light display themselves via computer or smartphone. "The interface will be easy enough for a normal person to interface with, and we will have hundreds of pre-programmed 'brushstrokes' that they can choose from," Newell says. "If they are interested in getting more detailed or want more control, we'll have that as an option as well, to let people really get under the hood and create magic." 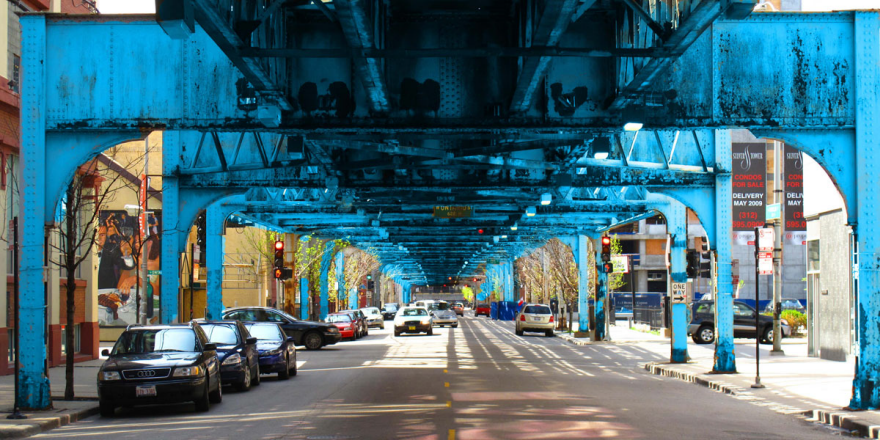 Early rendering by the team showing the tracks painted blue 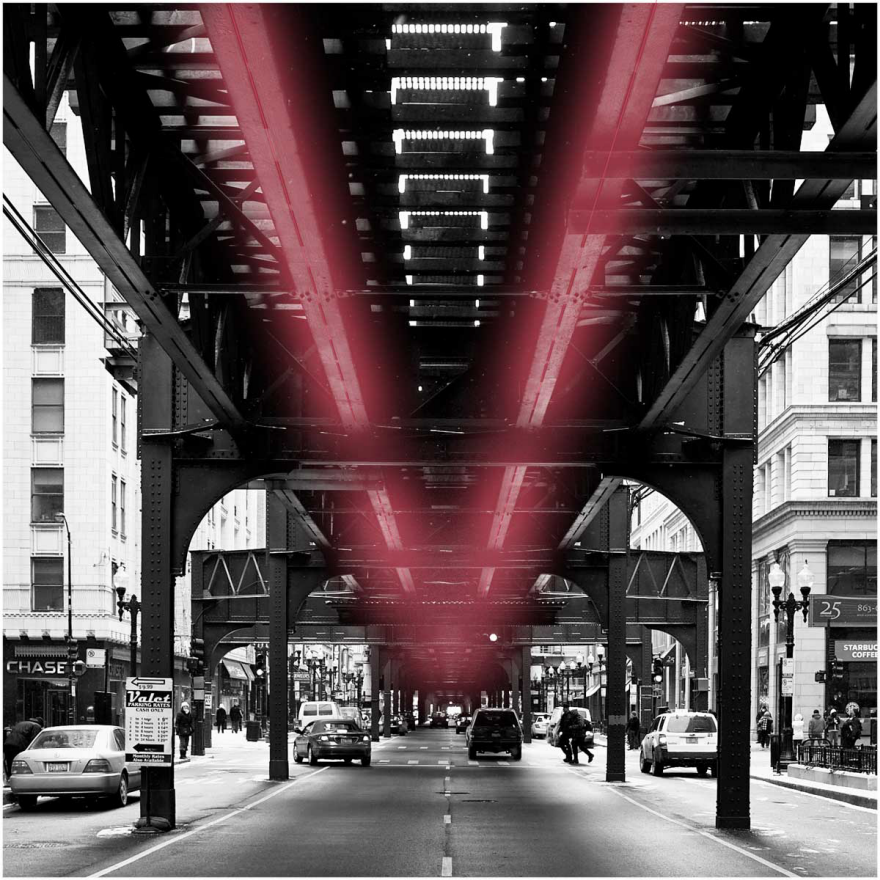 But first Newell and Unger have had to make some bureaucratic magic happen. For the past 18 months, they've been working closely with the Chicago Transit Authority, the Chicago Department of Transportation and the city government to get approved plans and find out the "who-is-doing-what" of this project. "A lot of people, when they ask about CTA/CDOT, give us a, 'Wow, that must be hard' sort of look," Unger says. "But, to be honest, I think we've both found the experience to be pretty great. These are hardworking people who have incredibly hard jobs, and the only time people talk about them is when something is going wrong. Hopefully, we won't have any of those conversations with them moving forward."

Most of Newell and Unger's conversations with the city agencies have centered around safety and logistics—which have been top priorities for The Wabash Lights all along. The vibrations of the L train produce a washing-machine effect, causing reverberations up and down the tracks but also from side to side. Since the lights are LED, they don't have many internal components that would be affected, but Newell and Unger want to test the effect of these vibrations on the light fixtures themselves as well as on the mounting brackets that will connect them directly to the tracks. Extreme weather conditions in Chicago, oscillating between below freezing to incredibly hot, pose another potential threat.

To leave as little room for error as possible, Newell and Unger are first running a beta test—and this is what the Kickstarter funds are intended for. They will be mocking up around 12 to 20 lights outside of the Palmer House Hilton on Wabash Avenue, in order to troubleshoot design and interactivity, and test how their specially designed hardware holds up against the elements. Through discussions with the CTA, CDOT and ILC, Newell and Unger have arrived at a custom mounting bracket for attaching the LED tubes to the L tracks. "One of the challenges of the L is that the tracks are not grounded, so there can be no metal to metal contact, unless you want the circuits connected to that metal to melt," Newell says. "So in all of these installations none of the lights can actually touch the L, it's all rubber pads that keep things good there." The bracket will also dampen the train's vibration by allowing for slight movement of the lights, which should help prevent any damage.

With six days to go in their Kickstarter campaign, Newell and Unger are now about 75 percent of the way toward their $55,000 goal. If they meet that goal, and if the beta test is a success, then they will start raising money for the actual installation, which has a far more ambitious funding goal: $5 million, to come via corporate giving, foundation support, grants and private donors.