This is not your ordinary campground...

When you think of urban camping you might very well imagine pitching a tent in your friend's back garden or even sleeping on a park bench—solutions that are pragmatic in the moment but not the most inspired or exciting experiences. In an attempt to redefine urban camping, Dutch creatives Annette Van Driel and Francis Nijenhuis have taken over the outskirts of Amsterdam this summer with a unique installation/residence hybrid. 14 architects, designers and artists were invited by the duo to create temporary structures which can be experienced as a sculpture park by day and used as sleep pods by night. The result, which has already garnered visitors from all over the world, offers a unique melding of art and life. 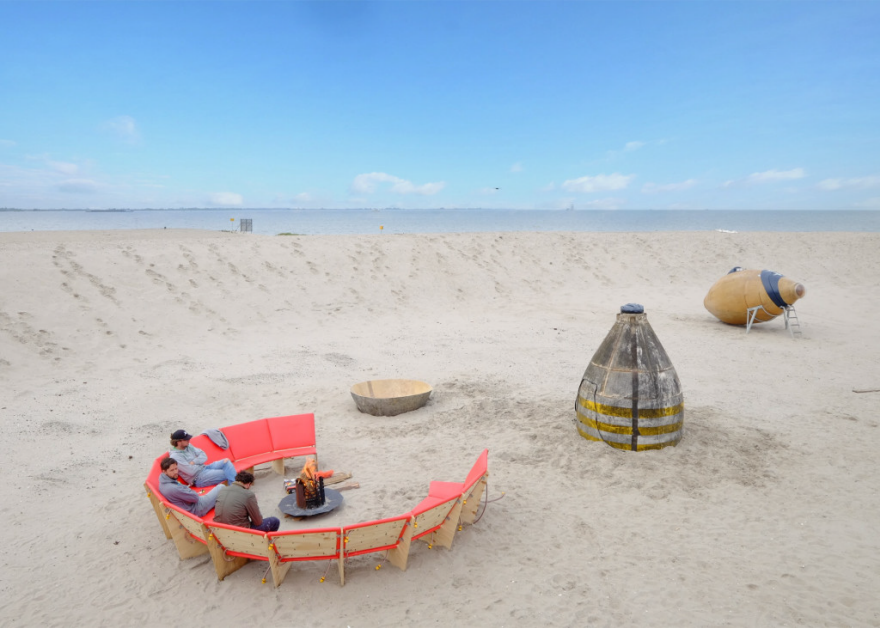 View of campground and campfire, which has been dubbed "The Superfire." [Photo courtesy of Urban Campsite Amsterdam]

Urban Campsite Amsterdam (UCA) is situated in the newest part of Amsterdam, Centrumeiland, the most recent artificial island constructed in the Ijburg neighborhood—a residential area under development to deal with the city's housing shortage— surrounded by the Ij Lake. UCA's exploratory vision has found a great home in this area that exemplifies transition and experimental modes of living. As co-founder Van Driel remarks, "This beautiful piece of land has been a wasteland for a long time; I came up with the idea of a campsite with mobile art to show the outside world how nice the island is."

When setting out to plan the project, "ordinary" was the last thing the dynamic Dutch duo was going for. Embracing the art of urban camping as a collective experience, they created a whole campus including an herb garden staffed by local architecture students, a space for conducting various DIY workshops and a local supermarket as well as a working kitchen and bathroom facilities. Once you have settled in, hammocks provide a place for quiet reflection while a central campfire offers a space for conversation and community. The fire is a keen symbol of UCA's larger goal of encouraging a melting pot of creative minds. "People come from all over the world; we have people from New Zealand and local people from Ijburg sitting next to each other at the campsite," explains Van Driel. This sentiment is shared by the artists and designers who built the installations in an attempt to push the boundaries of how we view and interact with the built environment. 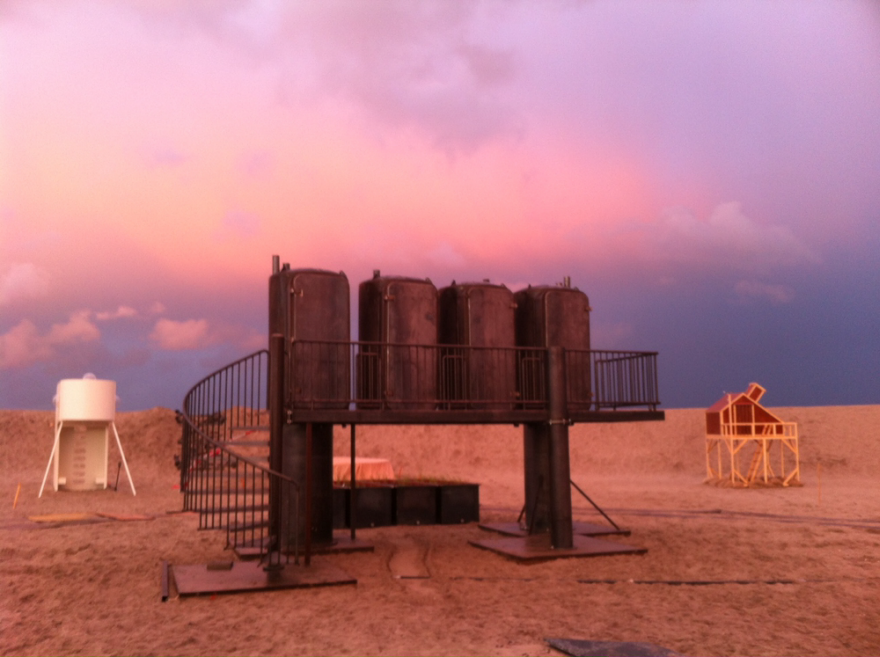 View of the Tribal Toilet Tower by Atelier van Lieshout, made out of discarded ship parts. [Photo courtesy of Urban Campsite Amsterdam]

For the designers, the brief was simple. With sustainability being one of the most important goals of the project, the only stipulation was that the materials the designers selected had to be used in a different way than their intended purpose. As Van Driel notes, this sense of transformation permeates the entire project. "The aim of the installation is to change your view of the surroundings. The installations connect the guests to the place and to the elements of air, sand and water which surround them." 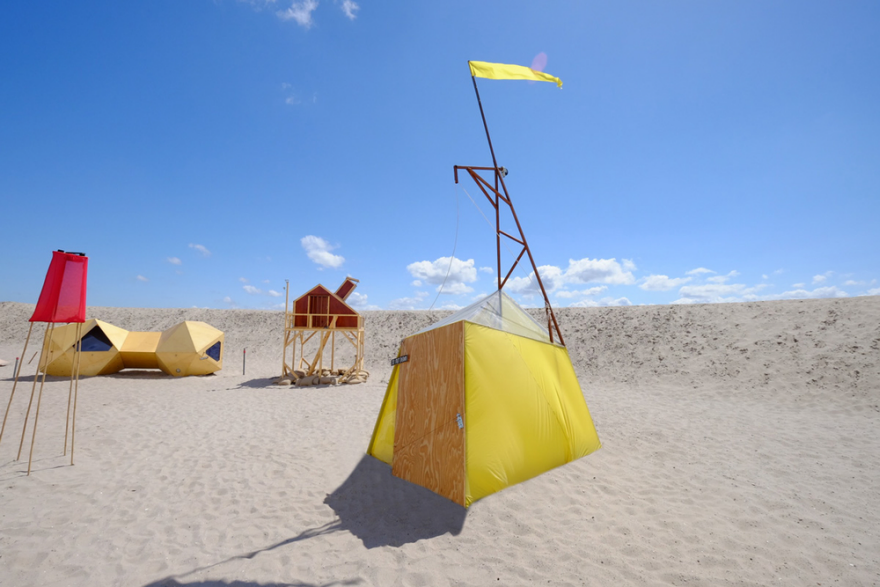 View of campground with Frank Bloem's Kite Cabin in the foreground and Boomhuttenfest's Solid Family and Arjen Boerstra's Attic in the background. [Photo courtesy of Urban Campsite Amsterdam]

Think of UCA as a magical traveling circus, a unique place for exploration where our ideas of architecture and design are pushed to new limits. While UCA cries out for a wider audience to be fully appreciated the world over, Van Driel and Nijenhuis are reluctant to embrace the idea of expansion—at least for the time being. Any moves to other cities would have to maintain the personal touches they have infused the site with. "For us, it's not only a concept but something we really like doing. If somebody else ran the campsite it would be totally different," explains Van Driel. In the meantime, many of the artists remain optimistic that they will be able to find a second home for their structures.

UCA remains open through August 31th. To experience this site for yourself, reservations for each shelter can be made through Airbnb.

I'm a British freelance Journalist based in London. I have written for the New York Post, The Guardian and Community Care magazine as well as for other publications in the UK. My stories normally have a social element to them as I enjoy humanity and engaging in social activity; finding out what makes people tick! I have travelled extensively and enjoy life to the full. I consider myself to be a social scientist/commentator.