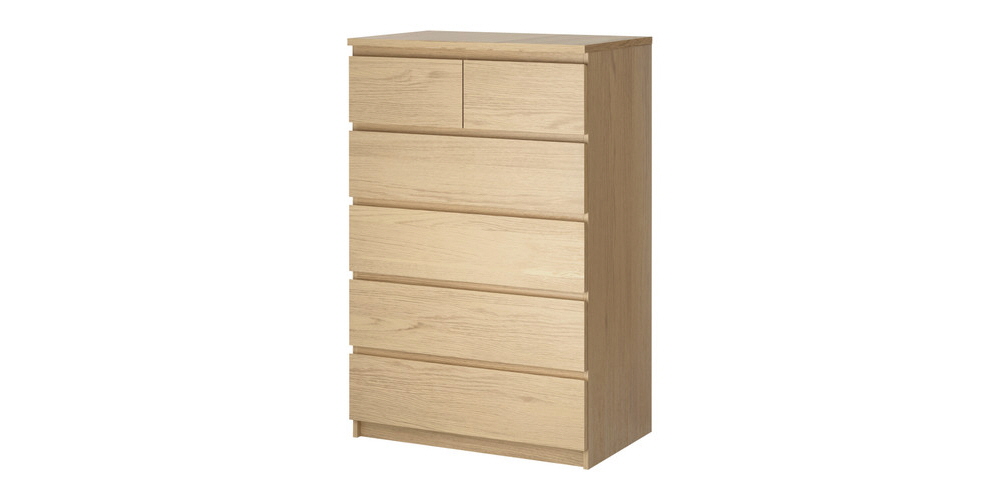 "When Furniture Kills:" Let's Cut Through the Hype

And what is the responsibility of the designer or manufacturer?

There is actually a headline going around this morning that refers to "Ikea's Deathtrap Drawers." Are you kidding me?

Here's what the headline, and other shrill ones like it, are referring to. It's come to light that in 2014, in separate instances, two American children died when they were crushed to death by dresser-drawers from Ikea. The furniture pieces in question were not anchored to the wall, and the children were crushed when the dressers (one roughly 48" tall, the other roughly 30" tall) tipped over onto them.

Details of the deaths are not mentioned, but I think it's a fair bet that the dressers did not spontaneously tip over. Children like to climb things, and if you imagine the top drawer wide open and a child hanging his weight on the front edge of it, you can imagine the rest.

The dressers in question are part of Ikea's Malm line, which are not significantly different than any other mass-market dresser. Ikea has sold them in the millions and each comes with a wall-anchoring kit as well as instructions for how to install it. The story is coming to light now because Ikea has announced they are offering free wall-anchoring kits to the 27 million Ikea customers who have purchased the Malm and other dressers like it from them.

Again, the units originally shipped with wall anchoring kits. Ikea is offering them again in hopes customers will actually use them this time.

The deaths of two children in one year is a terrible thing, but this is not an epidemic. CNN crunched the numbers in a Consumer Product Safety Commission report [PDF] on furniture-based injuries and found that "a child dies every two weeks from furniture or TVs tipping over," and even that is hard to call an epidemic; because according to the CDC, two children die every day from accidental drowning. That should be the cause of more concern, if making a numerical difference is the goal; the drowning deaths outnumber the deaths from falling furniture—including falling TVs—by a factor of 14.

Of course, no child should ever be killed by a piece of furniture, not in an age when we're conquering so many of the things that have cut childrens' lives short for millenia. So where is the problem here? We here in America love to blame people (particularly independent of facts and data), so here are some of the opinions you might hear from the general public:

It's the designer's fault.

Certainly not. Millions of people use these products without issue, and the products were designed to be anchored to the wall.

It's the manufacturer's fault.

Again I have to say no. The manufacturer includes the anchoring kit and instructions.

It's the children's fault.

You just know that some dumb-ass will write this on some internet forum.

It's the parent's fault for not supervising the children.

This is ridiculous. Anyone with children knows 100% omnipresent supervision is not physically possible.

It's the parent's fault for not anchoring the dresser to the wall.

This is where it gets complicated. Here's what USA Today wrote about the matter:

It isn't realistic to expect consumers with small children to anchor all large chests, in part because many can't do it because they live in rental units or there are other issues with their walls, [CPSC Chairman Elliot] Kaye says. And "plenty of parents don't know about the issue," making it far more important for industry to make what could be very inexpensive design changes, he says.

For their part, Ikea says they are "[collaborating] with the CPSC to find solutions for more stable furniture."

"We don't know yet what those solutions will be," says Ikea spokeswoman Mona Liss, "but we are committed to working in collaboration to try to find better solutions."

So: What are your suggestions for solving the problem? I'd love to hear some ideas from both a practical designer's perspective, and some blue-sky ideas as if you were an omnipotent government body that had the power to mandate any type of change you saw fit.