Nursery Works' Senior Designer on the Making of Its $7,500 Gradient Crib

Because baby deserves the best?

I don't know about you, but when my opportunity comes to bring a smaller version of myself into this world, you best believe that his or her tiny infant body will only sleep in the most luxurious baby crib money can buy. That's where Nursery Works comes in. The high-end children's-furniture retailer caters to a niche market. Its most expensive product, the Gradient Crib, retails for $7,500 (add $249 if you choose to include white-glove delivery). But what goes into that price tag? A lot, it turns out.

"It's easy to get things to look nice," says Matthew Grayson, a senior designer at Nursery Works. "But getting something that looks nice to also be something you can produce reliably and meet safety standards and to be able to make dozens of them—or hundreds of them—is a lot harder than just making just one nice-looking thing. You have to worry about packaging, fitting it through a doorway, getting it on a truck, not to mention having someone assemble it." Those are welcome challenges for the designer, who has a background in computer science and fine arts as well as an BS in Product Design from the Art Center College of Design, credentials that have allowed him to employ a range of methodologies and techniques to create some of Nursery Works' most extravagant and complex cribs for over three years now—ranging from a model that can convert into an adult-sized desk to one supported by a 24-karat gold base. 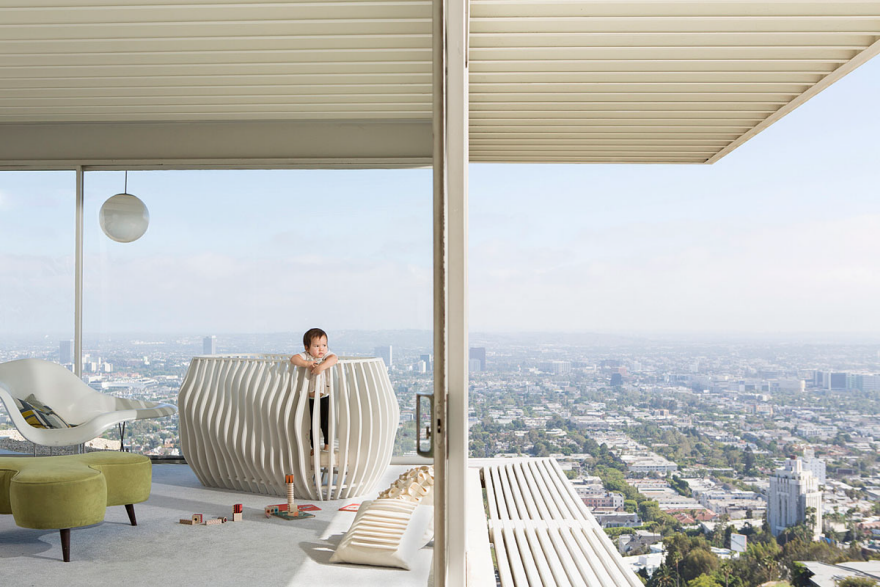 What, you want to put an Ikea crib in a house like this?

With the Gradient Crib, Grayson and his colleague Eric Lin began working on the idea in the summer of 2013 as part of a new line for the company. "We were discontinuing a lot of the existing products and moving them to be more high-end," Grayson says. "We were bringing most of the production to the U.S. and came up with a number of early concepts." Narrowing those down to around four concepts, the Gradient Crib in its initial ideation existed as a rectangular crib with a three-dimensional surface on the front.

Grayson and Lin passed designs back and forth for a few months before retiring the idea for a while. "Which is pretty typical for us," Grayson says. "We'll do a first round of design and then put it on the wall and then see how we feel after a couple of months. You let your subconscious work on something and, over that time, we realized that what we had designed was really just a flat, boxy crib with a really intricate front panel."

The designers agreed that to introduce it as a Nursery Works product, they would need to find a way to elevate the design to really take it to the next level. To do that, they needed to make the Gradient Crib more elaborate and compelling. "What we realized was that for that surface to work it really needed to be on a rounder crib, something that didn't have a clear beginning and an end," Grayson says. "So, that's how we arrived at the oval-formed crib." 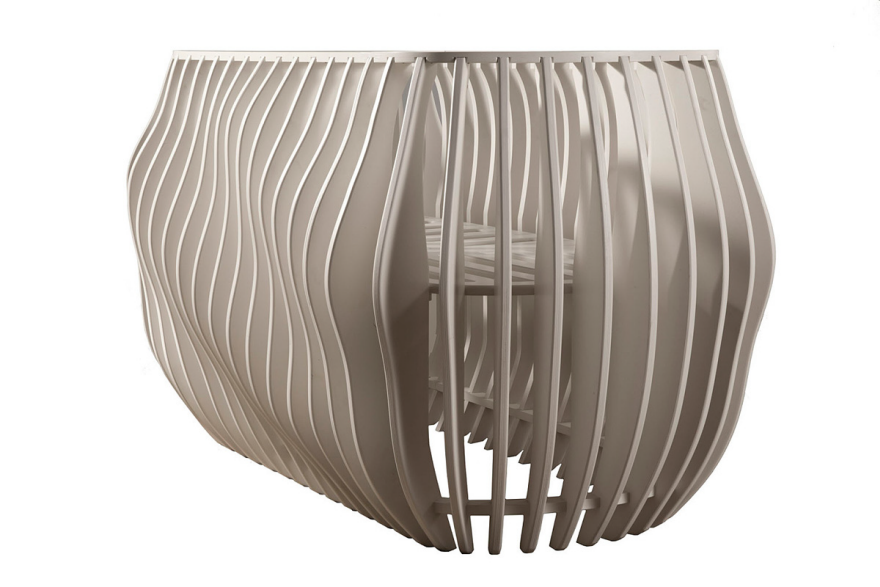 The Gradient Crib is made in Los Angeles, using only solid maple hardwood. 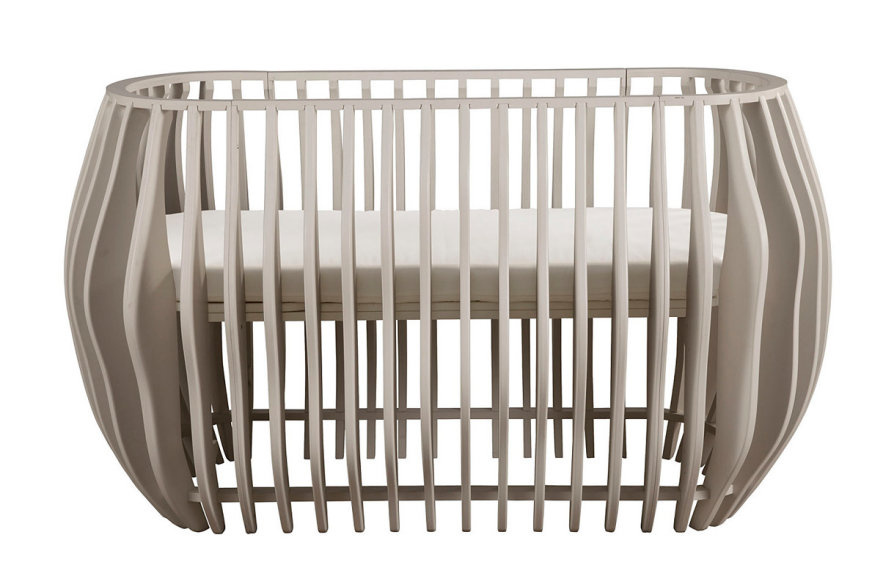 Grayson began with a wine-glass-shaped crib modeled in SolidWorks, where every slat was the same shape, widening at the base. Using Rhino, multiple surfaces were generated and, one by one, laid across the slats. Those surfaces were then cut away from the slats in a process to see what pattern could still be conveyed at that resolution. With each slab roughly three-fourths of an inch thick, and with around two inches of space between slats, only designs of a particular level of detail could be seen across the crib's exterior. "If you do anything too intricate, it's just not going to pick up the subtle changes and if you do anything too broad then it's not going to look like anything," Grayson says. Moving between SolidWorks and Rhino, Grayson would apply various surfaces to the slabbed model, making adjustments and iterating upon their design over the course of several weeks. 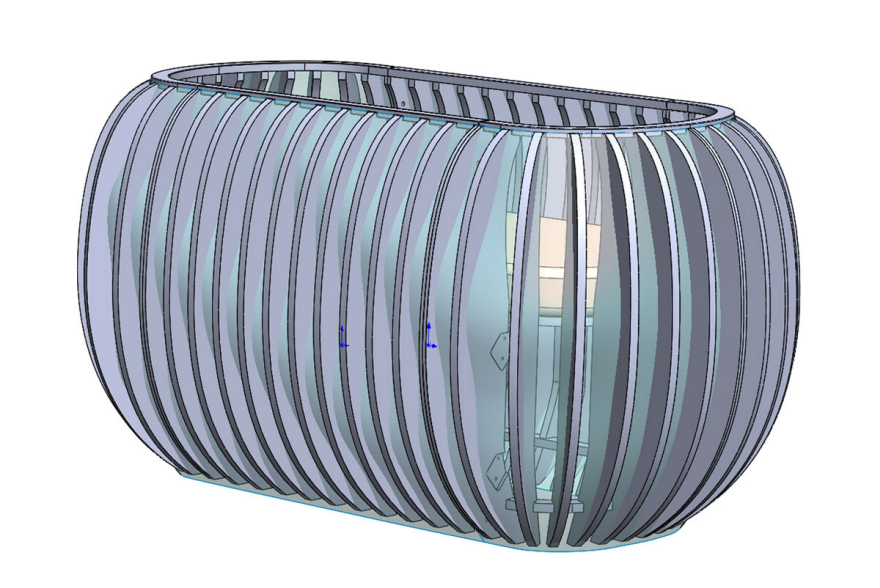 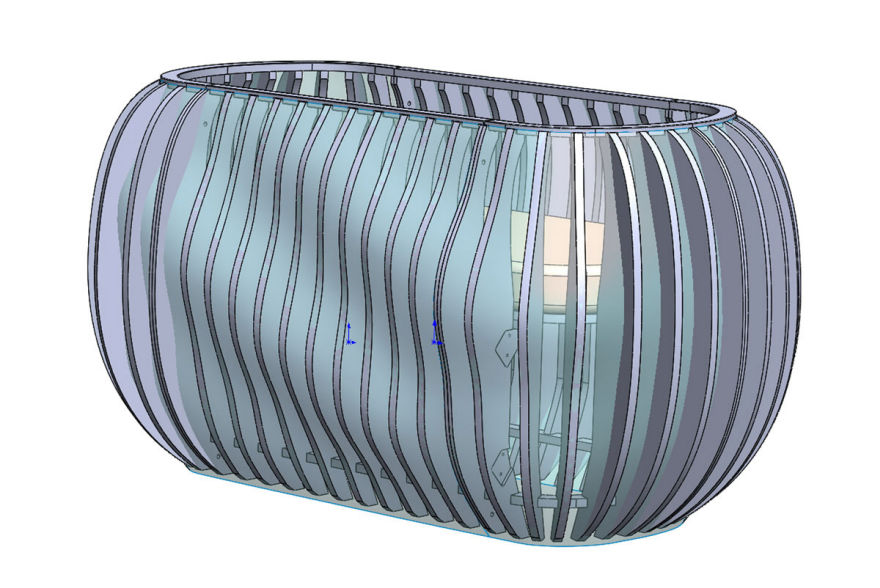 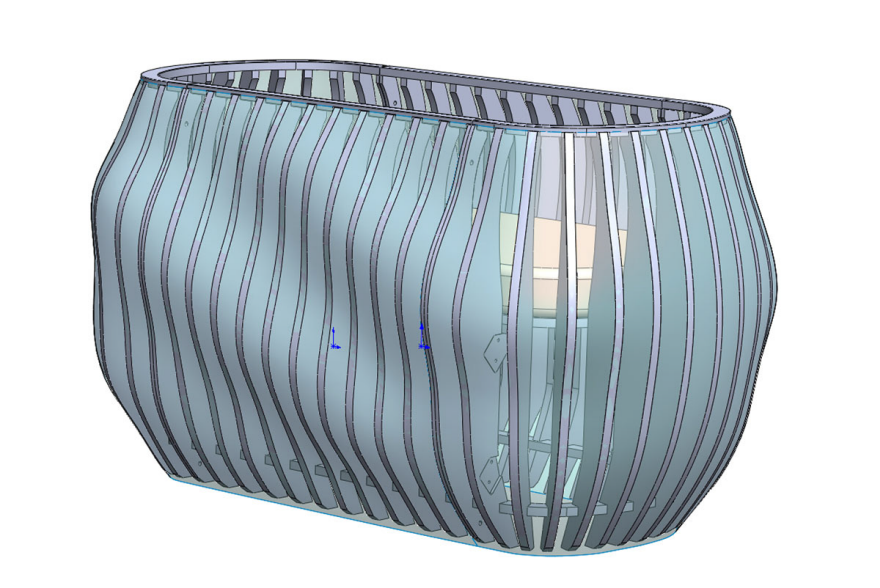 The project picked up again in the fall of 2013 when Grayson and Lin settled on a design they were satisfied with. Imagined in maple hardwood, the final design featured an undulating surface that wrapped around roughly 50 slats to create the exterior of the crib. Nursery Works focuses on small-scale production runs, cutting out many of the problems that typically arise when looking to scale a piece of furniture to mass production. No expense is spared when choosing manufacturing techniques, leading to decisions to employ laser cutting, gold plating and CNC milling in many of its designs. CNC milling was the production method of choice for the Gradient Crib, as the designers worked with a local fabricator in Los Angeles to realize their designs for a full-scale prototype in MDF.

The full-scale prototype gave the designers a sense of what the object would feel like in a home, but little experience of its functionality, so they quickly moved to birch plywood prototypes as they tested construction and assembly. The ability for the crib to convert to a bassinet was an important feature to the designers, as many customers who invest in these pieces look to extend their lifespan. The exterior surface added a layer of complexity to this, and Grayson and Lin had to design the pattern to be continuous, even when panels were removed to complete the transformation. "We didn't want the shape to be lost when you convert to a bassinet," Grayson says. "When you remove that flat panel from the front, you've now taken out a big chunk of that flowing surface. You still want it to be seamless, so you still need it to line up when it's in bassinet form." Grayson and Lin also wanted to avoid any obvious joints where the pieces were coming together, opting instead for invisibly mounted hardware and mattress supports. 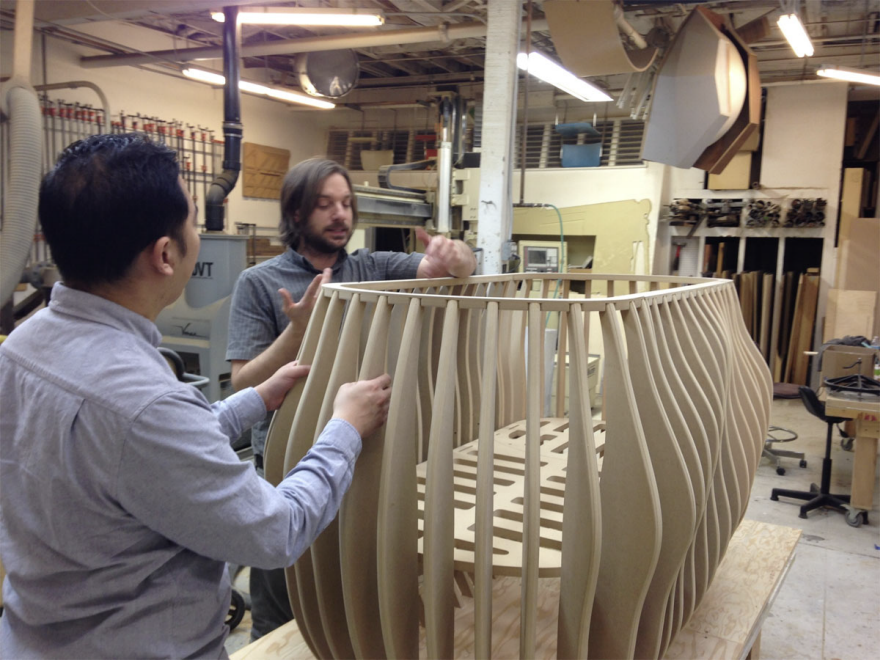 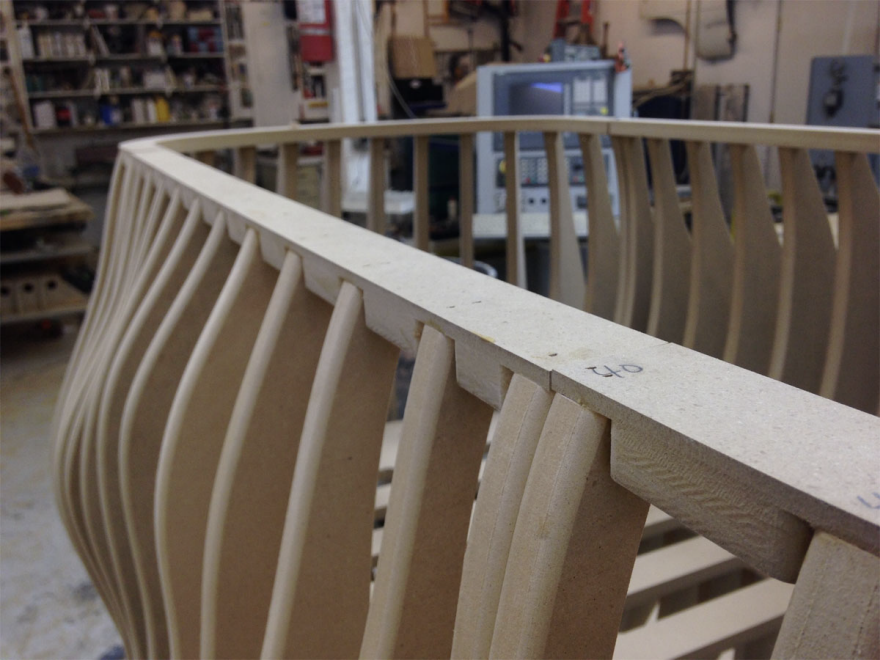 Detail of the slat-on-slat joints 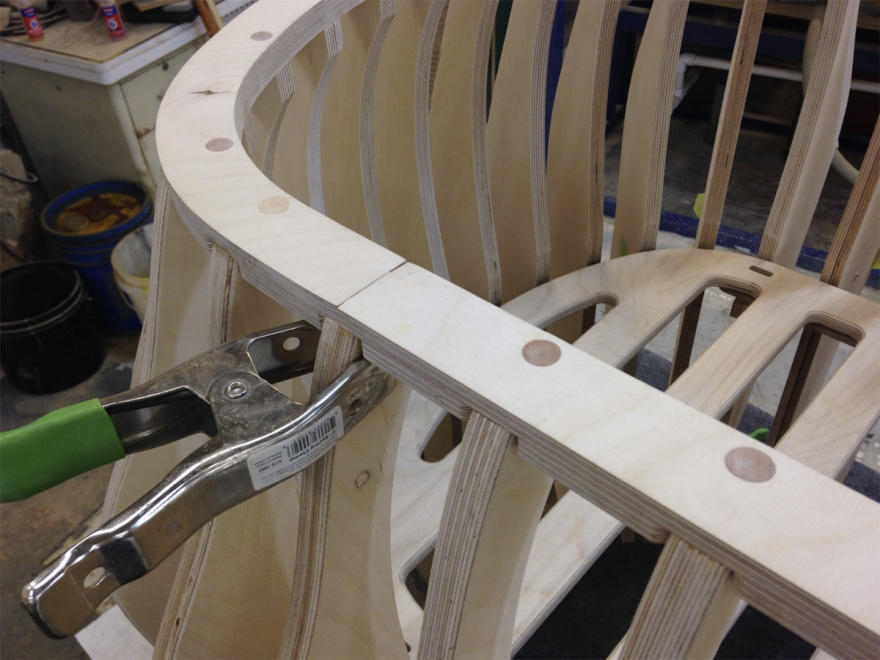 Detail of the screwed and plugged joints

Grayson and Lin tested a variety of ways to connect the hardware and supports, as well, careful to conceal all hardware. Aluminum fasteners were attached into a small pocket underneath the top and bottom rail of the crib, giving a solid anchoring point for assembly while simultaneously hiding all screws from sight. "It's really the most precise way that we could bring it together and allow the crib to remain really sturdy when we're shipping it, or when you're taking it apart into different pieces," Grayson says. Another detail, a separate piece of asymmetrical wood, is popped in during assembly to cover the hardware supporting the mattress, sitting flush to the rest of the crib and keeping the mattress securely in place.

It's that attention to detail—and disregard of typical cost-cutting manufacturing measures—that results in a $7,500 crib. At the end of the day, you can rest easy knowing that your baby is surrounded by some pretty meticulously realized furniture. Maybe it will even subconsciously make your kid love design. A small price to pay, right?

Nursery Works' Senior Designer on the Making of Its $7,500 Gradient Crib