Once Again a Combination of Design, Fine Woodworking and Roleplaying Games Leads to Tremendous Success

Adults who play role playing games have money, and are willing to spend it on good design. That was the conclusion I came to after seeing Geek Chic's beautiful gaming tables, which carry five-figure price tags and year-long waiting lists. And something I found outstanding about their approach was beyond their design work (which I also liked, by the way); it was that they really paid attention to the customer experience, carefully designing not just the furniture, but the process of how the end user orders one of their products and essentially has their hands held through much of the waiting process during fabrication.

Now another company producing wood products for gamers, this one called Wyrmwood, has again combined good design with clever business sense. First off let's look at their product, which sounds simple, but does something surprising:

I'm not showing you that video to pump up their crowdfunding campaign; it's already over, and they netted $246,719 over a tiny $10,000 goal. No, I'm showing it to you to as an illustration of how designing something relatively simple, but clever, and targeted at a highly specific audience can lead to great success.

If it's not obvious from the video, the guys and gals at Wyrmwood had already designed, and were already selling, their successful dice tower system. What's notable here is that they dreamt of offering it in a much wider variety of wood species—I'm talking 70 and including exotics—that they could not possibly afford to pre-buy the lumber for. 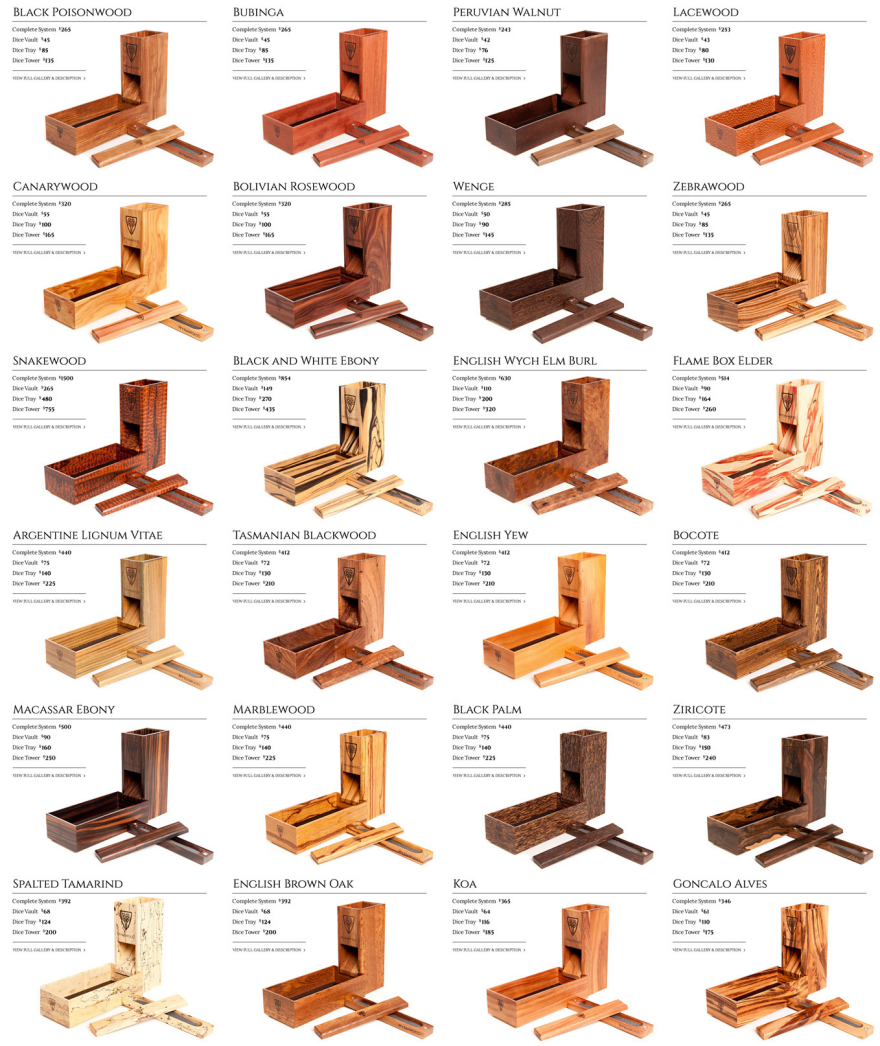 So they turned to Kickstarter to get precise information. By learning exactly how many people wanted exactly how many units in exactly what species of wood, they could order only what they needed. Wyrmwood designer and co-founder Edward Maranville explained their approach to Polygon:

Our Kickstarter is a bit unorthodox, in that the main reason we're running it is to expand our variety of options, not the product itself. While we'd love to offer that kind of variety all the time, we just can't do it from a logistical perspective — we don't have the space for all the lumber, or the inventory.

Keep in mind we offer different sizes and surface options, so if we stocked our 15 product variations in 70 different woods ... it quickly gets very out of hand. But, in the context of a Kickstarter, we can get all the pledges, order exactly what we need and make them in a series of large runs we can manage.

The really clever bit they've pulled off is the part that's easy for Kickstarter novices to overlook: Accurately managing customer expectations. Because Wyrmwood was already tooled up, was already experienced with production times for the existing product and employs enough experienced woodworkers to know that Bubinga and Wenge are a lot trickier to work with than Pine and Walnut, they were able to create a precise system of timelines.

We took our time with the development of the Dice Tower System, refining the production process and figuring out what it takes to make them and how many we can make over a given period. We've set limits on our reward tiers based on this, and so we're staggering out the delivery estimates in batches. The first tier was for 100 backers who would get early delivery a month away. The next is 3 months, the next 5, and we'll simply add on new delivery windows as these fill to ensure we can always deliver on time, as promised.

In other words, these guys didn't...roll the dice with their delivery times. [Cue rim shot.]

Once Again a Combination of Design, Fine Woodworking and Roleplaying Games Leads to Tremendous Success