Building a New Sonic Architecture at the New Museum

Brooklyn studio The Principals on the making of DELQA, an interactive music and light installation opening in New York on Thursday

Museum displays are typically meant to be seen and not touched, but a recent wave of exhibitions is upending those rules. Take DELQA, an interactive music and light installation opening in the New Museum's NEW INC space on August 6. Showcasing the music of Matthew Dear combined with Microsoft's Kinect technology, the project allows participants to touch, push and poke suspended mesh walls to manipulate a musical composition, creating their own unique experience of the space.

The architecture of DELQA is the work of the Brooklyn design studio The Principals, which last May was invited to join a project team that included Dear, the strategic music agency Listen and the artist and programmer Charlie Whitney. "In the beginning, we talked about examples of sonic architecture, mainly forests," says Drew Seskunas, a co-director of The Principals. "The idea that a forest is a series of architectural narratives: meadows, groves and valleys that sound and wind narratives flow through. Visually and aurally there are connections, but physically there are distances." 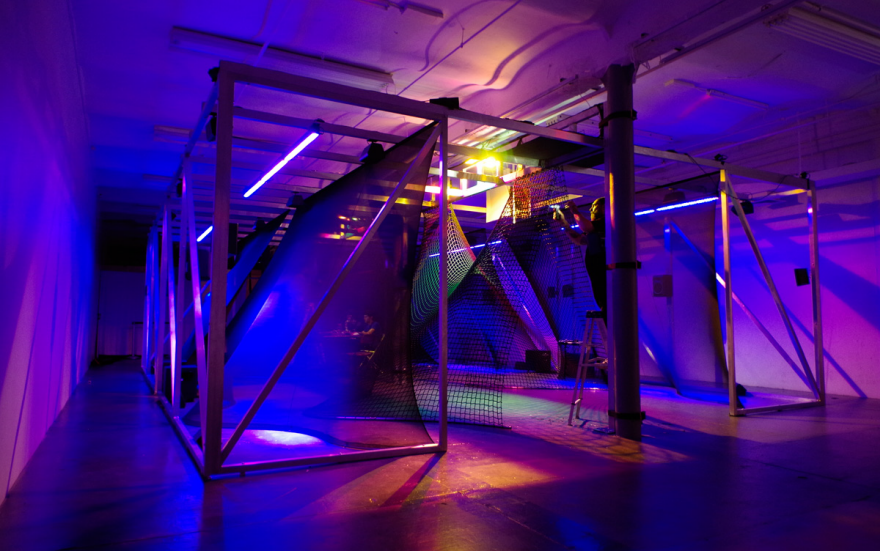 This concept of deep forests became the foundation of the project, and The Principals set out to use different densities of mesh netting to create a space rife for exploration. "For DELQA, we felt it was important to test visitors' assumptions, but also to give them a point of reference," Seskunas says, "so the geometries are reminiscent of earth-like landforms and mountain topography." That topography became known as DELQA after Dear sent over a file with a random title of the same name. "A member of the team commented on how it sounded like a distant planet, and all of a sudden it became apparent that that was exactly what we were doing: creating a new world," Seskunas says. "Somewhere out in the unexplored territories, we were discovering DELQA."

The Principals began building physical models and, before long, full-scale prototypes. "Often we work with new geometric systems or material applications, so it's much more efficient to go from prototyping to fabrication in house," Seskunas says. He and his fellow Principals built out a quarter of the final installation in their production studio in Greenpoint, so that the sound designers and programmers on the project team could work off the partially constructed piece to test the technology and various components. 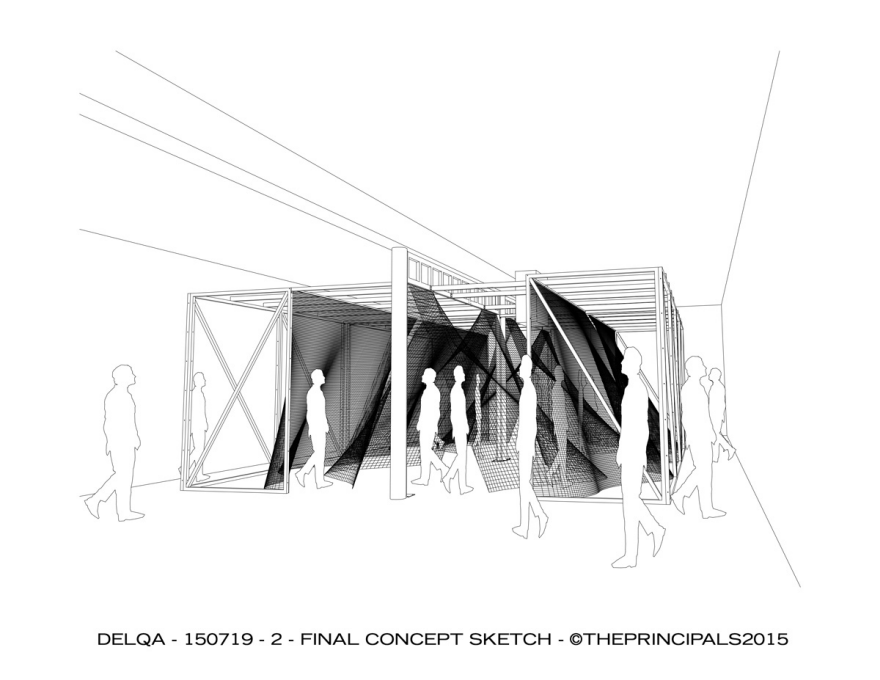 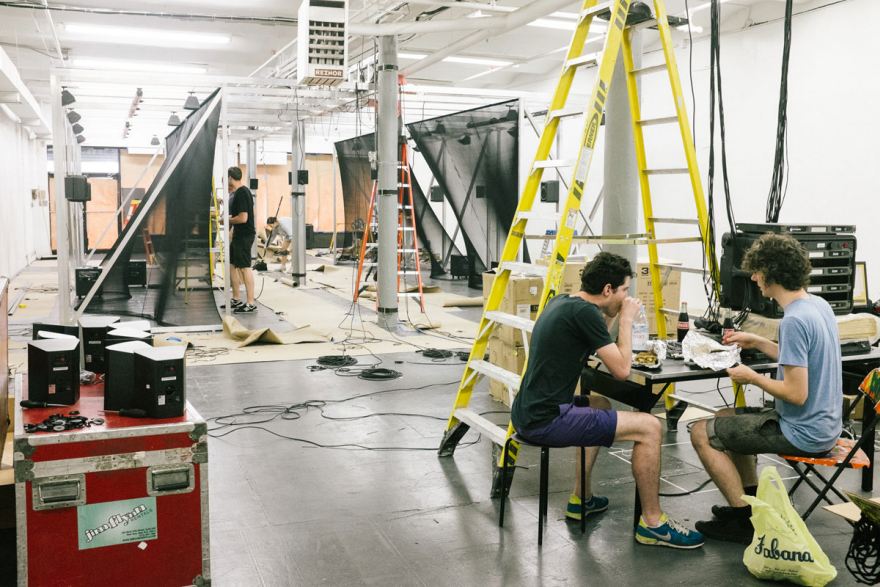 Building the full-scale prototype in The Principals' Brooklyn production studio 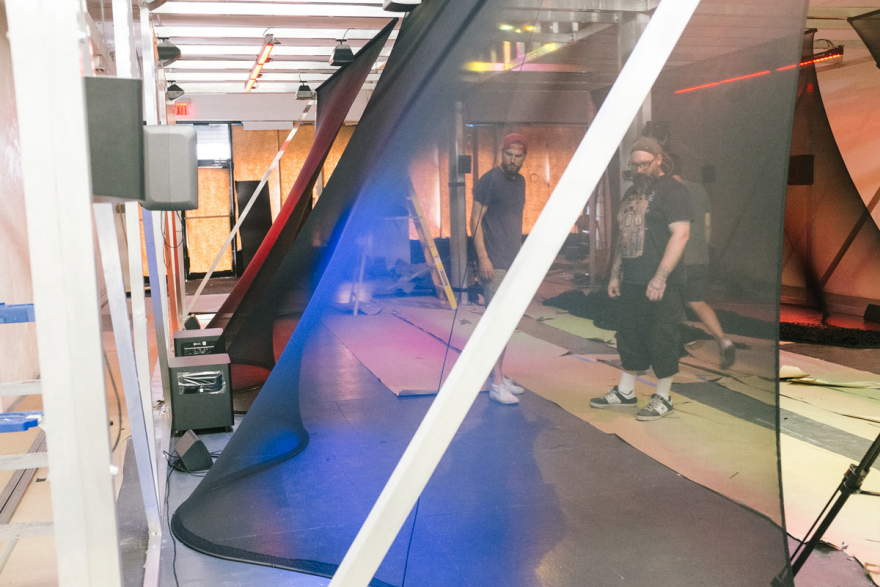 For the mesh, The Principals used two different densities—a nylon netting at two-inch density and a fine spandex—and had a factory in New York's Garment District sew several 15-by-12-foot panels for the installation. These panels were then adhered to large aluminum frames, and a Microsoft Kinect was used to map the resulting surfaces to track depth and location as the surface is touched from the opposite side. "Both [mesh densities] have inherent qualities, which we used to define the spatial relationships," Seskunas says. "For instance, people inherently want to climb or lie in the open mesh, which allowed us to use the Kinect to track their movements. In response, certain aspects of the song alter directly to [that information]. The denser mesh has this very tactile quality that, paired with curving forms, creates an architecture people want to touch."

The Kinect is able to sense movement on or within the mesh landscape, transferring that data to a 44-speaker sound system. Listen managed the sound design for the project, while Dave Rife and Gabe Liberti alongside Yotam Mann handled music interaction and spatial sound, working directly with Dear, to pull out different elements from the composition and assign them to specific inputs. Mapping and tracking information controls elements of these sounds—such as pitch, level and reverb—each linked to a local area of the mesh netting. "When you put this all back together you have a complex landscape, both sonic and architectural, that changes as you interact with it," Seskunas says. 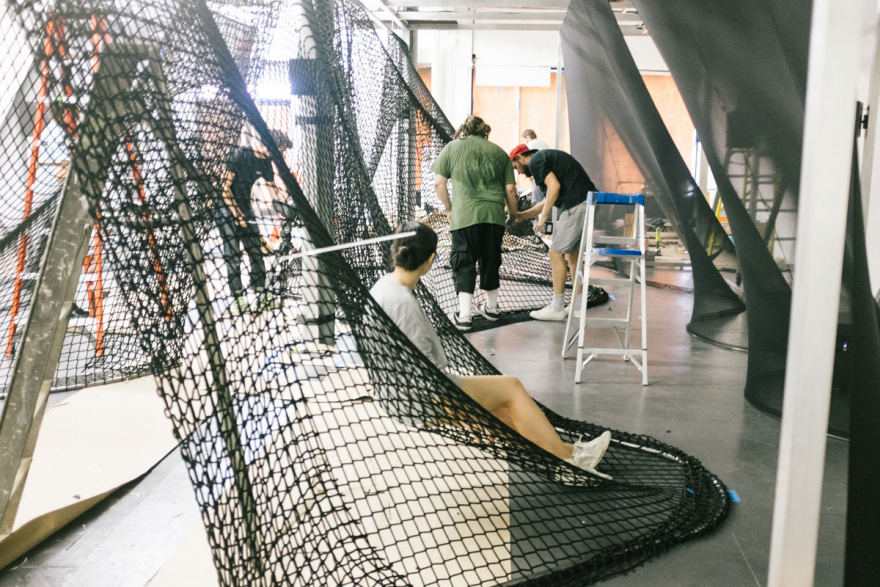 More photos from the prototype construction and testing 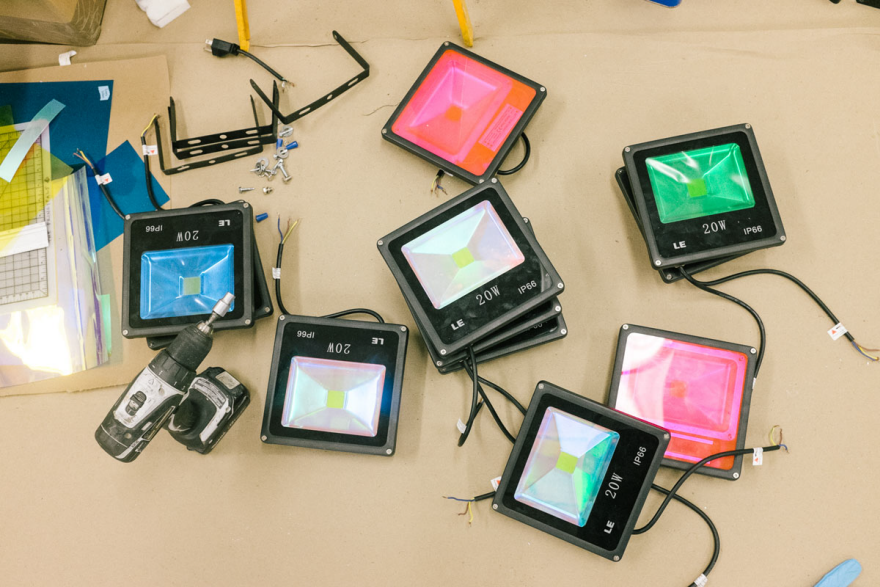 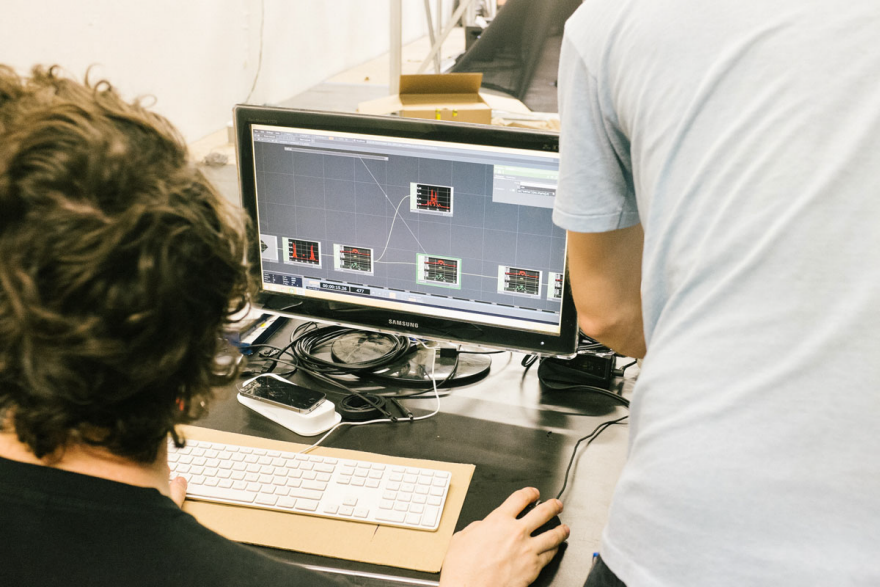 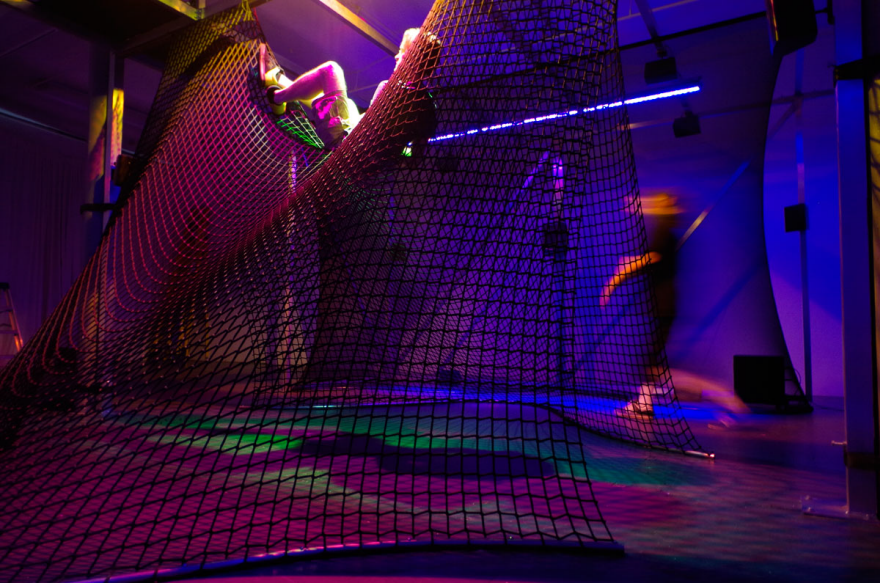 Testing the finished installation at the New Museum

For final construction, that quarter of the installation in Greenpoint, along with all the other pieces, will be transported from The Principals' production studio to the New Museum. A ten-foot-tall structural aluminum frame measuring 24 by 32 feet is prepared to be built for the first phase, as lighting and sound teams will attach speakers, lights and Kinects to the frame, placing computers where needed. Once the aluminum frame is constructed, The Principals will begin placing the mesh netting, at which point acoustic, light and interactive testing will also begin. To allow for on-site calibration, the entire installation is required to be built and running at least three days prior to opening—meaning that by the time this article is published, construction has already gotten underway for the public opening on Thursday.

If you're in New York and want to experience DELQA in person, you'll have to act fast—it's only on display for four days, from August 6–9. For those interested in checking out more of The Principals' work, the studio be participating in the stage design of MoMA PS1's Warm Up series again this year. For the August 15 and September 5 shows, a site-specific piece titled "Hold me closer tiny (Air) dancer" will place a field of air dancers along the perimeter of PS1's roof overlooking the dance pit, for an entirely different kind of interactive music experience.