On Saturday morning I had to run down to Bed Bath & Beyond in TriBeCa to pick up some kitchen stuff. As I hit the CitiBike station a block away and unlocked my ride, I found the journey downtown much easier than normal because it was Summer Streets.

NYC Summer Streets is an annual event where for three Saturday mornings in a row, the city shuts down all of Lafayette Street and Park Avenue to vehicle traffic. No cars allowed. They thus create an enormous, safe boulevard for bicycles and runners, who can travel all the way from the Brooklyn Bridge up to 72nd Street without having to worry about getting clipped by a Tahoe.

As I traveled down Lafayette, I looked across Collect Pond Park at the enormous New York City Criminal Courts Building, which was designed in the 1930s by architect Harvey Wiley Corbett and still does a brisk business today.

Corbett would have loved the idea of Summer Streets, because if he'd had things his way, all of New York City would look like Lafayette Street on Saturday. Under his concept, pedestrians and bicycles could claim ground level for themselves, while trucks and cars would be with the subways, down underground.

Way back in 1925 Corbett, who designed and loved skyscrapers, gave an interview to Popular Science magazine. They asked him to look 25 years in the future to talk about what NYC ought to look like in 1950, and here are some of his predictions:

Unlike many other experts, Mr. Corbett does not believe that the future will bring the "decentralization" of our big cities. On the contrary, long study of modern trends in architecture, city planning, and business and social life has convinced him that our cities will become more and more crowded.

...Facing this contingency, he believes, we of this generation should begin now to plan buildings and highways with an eye on the problem of handling people and traffic of the future.

Oh, why didn't they listen to him.

The streetcar and elevated railway [Editor: Manhattan once had much-used "Els," or elevated subway lines, like Chicago], Mr. Corbett says, will disappear.

Streets will consist of four or more levels, respectively for pedestrians, slow motor traffic, fast motor traffic, and electric trains, the uppermost level being raised above the present street level.

That would be awesome! Bikes and people in open air, while taxis, Ubers, delivery trucks and subway cars would be underground. Here's a rendering of his concept: 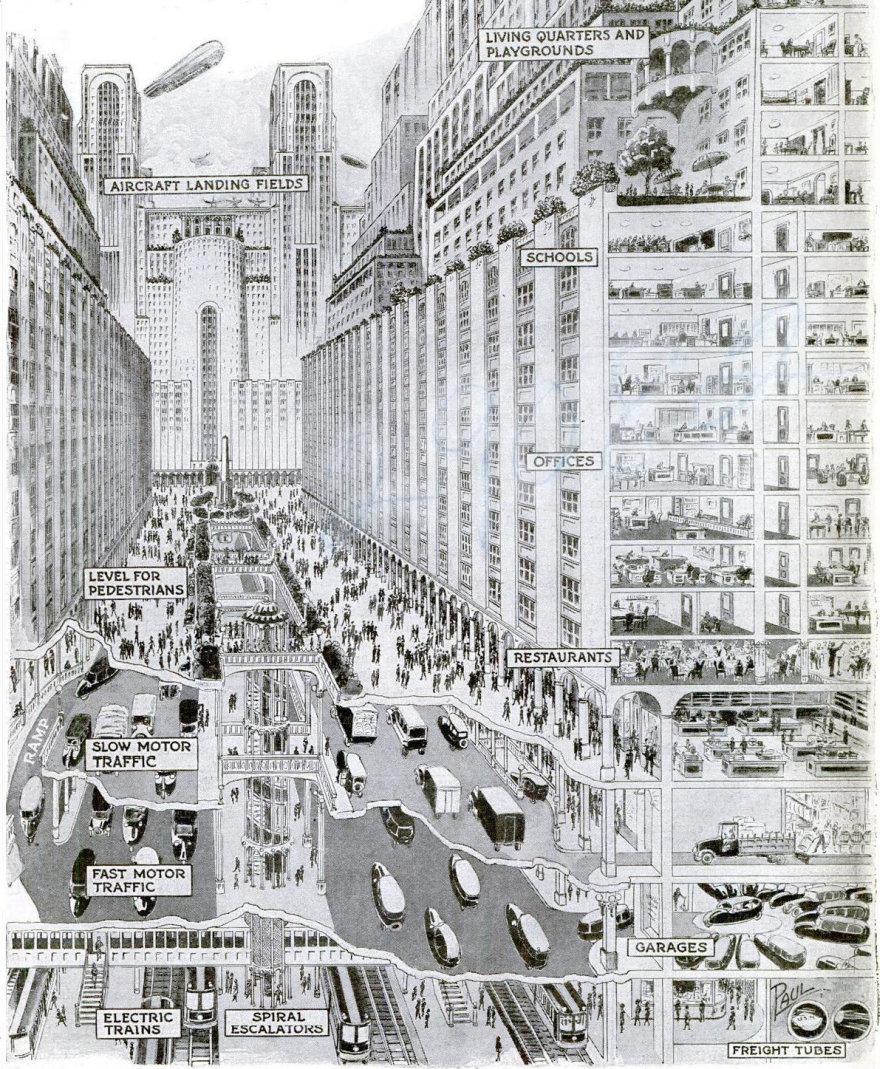 Great blocks of terraced skyscrapers half a mile high will house offices, schools, homes, and playgrounds in successive levels, while the roofs will be aircraft landing-fields, according to the architect's plan.

To be fair to Corbett, 1925 was twelve years before the Hindenburg disaster, in an era when dirigibles were seen to be the future. And for those of you who have had to journey from Manhattan to JFK, how awesome would it be to bike into midtown and take a "spiral escalator" up to your blimp? Sure the air journey would be slower, but it's got to be more pleasant than today's hellish air travel.

Corbett went on to chair the architectural committees for both the 1933 World's Fair in Chicago and the 1939 World's Fair. And he designed the aformentioned NYCCCB in 1941, at the age of 68, his final project prior to retirement.

Harvey Wiley Corbett died in 1954, aged 81, four years after his predicted 1950 NYC never came to pass. I hope he wasn't as disappointed as I am that no one listened to him.