Every year we look forward to the INDEX: Awards, a program that staunchly stands by its mission to uphold designs that improve life and seek out sustainable solutions to the most pressing global challenges we are facing. This year, 1,123 nominations were whittled down to the 5 projects you see below, all of which expand our understanding of design and its ability to enact change. We'll keep this short so that you can get to the meaty stuff, so grab a refreshment and settle in because it's a long one (and the videos are must-sees!)

Once affixed to a smart phone, the Peek Retina adapter takes high quality images of the retina, which can be examined for any irregularities.

Used in conjunction with the adapter, the Peek Retina app creates a simulation of the patient's weakened vision and contrasts it with healthy vision.

According to the World Health Organization, 285 million people are currently suffering from visual impairment around the world. This staggering statistic is only worsened by the knowedge that four out of five people who are blind don't need to be—they simply didn't receive timely treatment for curable diseases. Peek Retina is part of an initiative to bring high-standard eye examinations to low or middle-income nations (where 90% of visually impaired people live) through portable kits that make eye exams far more accessible and easy to administer. The simple system is composed of an adapter that fits over a smart phone camera to scan the eye and an accompanying app that provides a series of important tools, like the ability to share test results with off-site professionals for further diagnostic support.

The system directly addresses the main issue for eye care: retinal diseases are a major cause of visual impairment but it is almost impossible to transport the expensive, unwieldy equipment normally used in exams to remote countries. "Peek Retina creates an opportunity for anyone to leverage the knowledge of experts anywhere in the world, in an incredibly smart and low cost way—in other words, the device is a great connector," noted jury member Veronica D'Souza. Peek will soon be available to all European Union Countries and steps are being taken to gain approval with the FDA in the USA as well as develop distribution models in Kenya, Botswana, Tanzania and Mali. 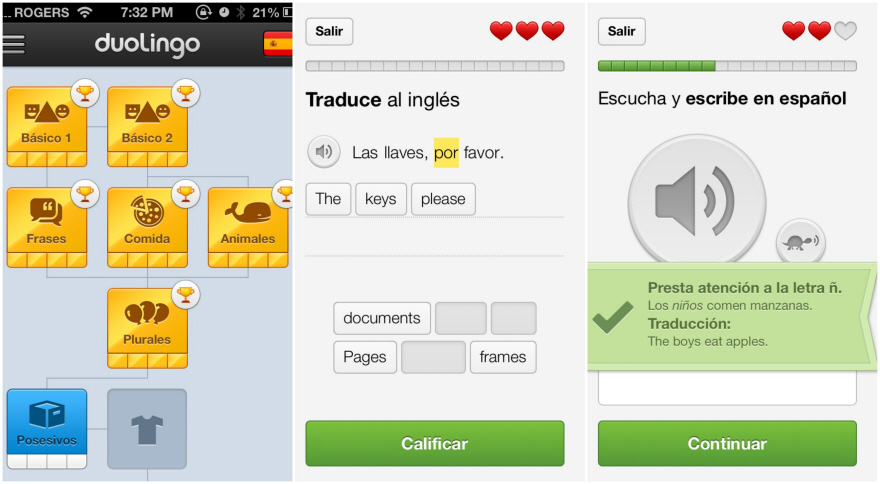 Perhaps Duolingo's most significant contribution is its ability to revolutionize the internet. A statistic from their research team states that if one million people used Duolingo to learn Spanish, the entire Spanish Wikipedia could be translated into English in as little as 80 hours.

If learning a foreign language is on your bucket list, the award-winning Duolingo language education platform might be the most efficient way to cross that off sooner rather than later. Available to anyone with an Internet connection, the game-like system breaks up the road to fluency into modules that cover everything from simple everyday phrases and correct pronunciation to more complex tasks, like learning how to discuss politics. The system uses rewards and reminders to keep you on top of your lessons and make sure you're making daily progress—the app has been conceived to fit into any spare moments that crop up during the day, and even a 3-minute quick exercise will replenish your progress bars. Research has shown that 34 hours spent on the platform results in the equivalent of an 11-week university semester!

Duolingo's ability to facilitate global communication has never been more relevant and the program carries the tools to enable better cross-societal connections. Its long-term goals include opening up the Internet through the mindset that everyone is a valuable translator. For example, a user might be presented with a sentence in Portugese from a Wikipedia article and after correctly translating it, the data is saved and available to everyone. "It's a great movement toward human-based computation and citizen research," commented jury member Patrick Frick. "It's one of the best ways of answering the question: how can you effectively utilize the skills of 7 billion people on the planet?"

The concept of vertical farming can be traced back to the Indigenous people of South America and East Asia who used vertically layered growing techniques to produce rice and other crops.

On a landmass of about 277 square miles, Singapore houses more than five million people. This formidable lack of space has led to unsustainable importation practices, with over 93% of fresh produce being brought into Singapore from countries both near and far. Sky Urban Vertical Farming System begins to address these issues locally, as demand for food becomes an increasingly global issue. The project devises a series of tower-like outdoor greenhouses which are able to grow a range of vegetables, ultimately producing 10 times more food per land area unit. The rotating shelves are powered by a hydraulic system which uses only 0.5 liters of water per day—which is later recycled by watering the vegetables themselves.

The project speaks to inventor Jack Ng's vision of an Agripolis: the integration of architecture, urban planning and cultivation technologies. This is an initial step toward a system "where agriculture is fully assimilated into urban environments not just as a sustainable and replicable ecosystem but also modern lifestyles incorporating learning and recreation," explains Ng. Since 2012, the system has been in use and proving that vertical farming is capable of competing with, and even surpassing, the results of traditional farming. "We've seen many before but this is actually working and is at the top of its' field—it is a brilliant combination of technology and design thinking," explains jury member Simona Rocchi.

The home batteries—costing approximately $3,500—are compact and easy-to-install. They can be mounted on walls and up to nine batteries can be stacked to create a large power source.

"It's the most promising design we've seen that will encourage people to use renewables and and to level out energy consumption," said Jury Member Katinka von der Lippe.

Though solar power has become much more prevalent in homes and businesses, the lack of a system to store excess energy has maintained the need to purchase energy from the power grid, continuing the use of carbon-electricity. Enter the Tesla Powerwall, a rechargeable, lithium-ion battery that stores solar energy generated during the day for use at night. Starting with making households more independent from the power grid, the infinitely scalable system also proposes a way of thinking about the future of energy use worldwide. "It's an absolute game-changer," stated jury member Arnold Wasserman. "Energy self-sufficiency—what could be bigger than that?"

With the first round of Tesla Powerwalls slated to be shipped as soon as next month, Musk already has his eye on the larger picture. His system has the ability to transform the future of power use: 160 million packs could transition the US to renewable energy while 900 million units would be capable of shifting the entire world's energy needs. "This is within the power of humanity to do. It is not impossible, it is something that we can do," he reminds us.

Plastic in the oceans has become one of the world's biggest pollution problems, killing up to 100,000 birds, fish and other marine life every year.

"Using vessels and nets to collect the plastic from one garbage patch would take about 79,000 years and tens of billions of dollars," the Ocean Cleanup Array team reports. "Such an operation would cause significant harm to sea life and generate huge amounts of CO2 and other emissions."

We've previously marveled at 21-year-old Boyan Slat's ingenious solution for cleaning up plastic pollution from the world's oceans—a precocious will to tackle the big problems that completely embodies the ethos of the INDEX Awards. Eight million tons of plastic are discarded into oceans every year—a number that is ever increasing. Gyres, the large current systems in the sea, naturally concentrate most of this plastic into five large areas around the world, often referred to as islands of garbage.  The Ocean Cleanup Array proposes a passive system for collecting this debris, by setting up a series of floating structures in the center of the gyres to gather the plastic. First, rows of floating barriers work like a giant funnel to suck in the debris while platforms attached to the barriers extract and filter the plastic from the sea before bringing it to land, where it is stored in containers before being recycled.

"We live in a plastic age and we've already recognized a number of global challenges related to the oceans—it's about time we're serious about a resource that makes up over 70% of the world's surface," said jury member Katinka von der Lippe. "It's a beautiful intellect to use nature to your advantage, this is great example of an initiative that is driven by broader principles to improve life for all humanity and our surroundings for many years to come," added Lim Chee Onn.