This is a design problem, and I loved watching how he solved it

Louis Sauzedde got his hands on a ripsaw in truly horrific condition. As you can see in the photo below, it looks like this thing was tied to the back of a car and dragged down the Interstate: 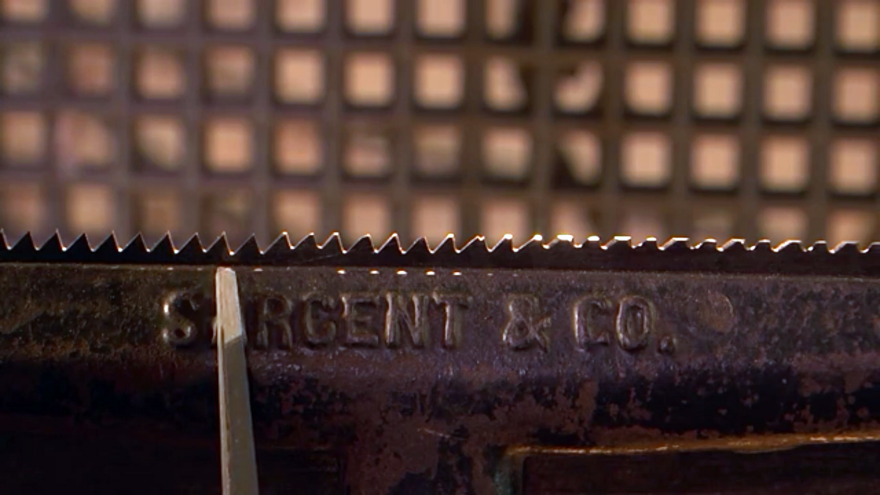 So how do you fix something this far gone? Obviously with a file, and there are entire books written on the subject of how to sharpen handsaws. But I'm impressed at how Sauzedde, the Master Shipwright of Tips from a Shipwright fame, came up with some very clever tricks to make this famously tedious task easier.

Think about this: Why would you draw angled lines on the table below the saw vise, or remove the file's handle and replace it with a handle that's triangular in cross-section and rotated 10 degrees relative to the top face of the file? (Hint: That latter one's got nothing to do with ergonomics.) Using just your eyes and no jig, what parts of the blade do you have to rely on for visual feedback that you're accurately accomplishing your goal? Watch and learn:

In the second part, Sauzedde uses a cool little tool to alternate the "set" of each tooth:

In America at least, old handsaws are a dime a dozen at yard and garage sales. I've inspected a few and always passed them over because they looked like the one in Sauzedde's videos before he'd tended to them. But seeing how do-able he makes it look to get them cutting good-as-new, I believe I'll pick up the next one I see and give it a whirl. (Anyone got recommendations for a good saw vise?)