What Do You Think of the Design of TiVo's Bolt?

TiVo has unveiled their new Bolt set-top box, and every article written about it cannot help but mention the physical design. That's because it looks like this:

While the odd shape is arguably functional—the cooling vents are located beneath the apex of the arch—I can't help but feel the form was designed primarily for press-getting purposes, and by all accounts it's working. But as with the Bouroullecs-designed Samsung Serif TV, we have to ask: Does this form factor contribute to the user experience in any way? Folks are meant to purchase this box in order to DVR or stream content to their black rectangles; once they're absorbed in their content, are they meant to gaze lovingly down at the swoopy silver box beneath it?

The back of every peripheral typically looks bad, and to me this one looks even worse: 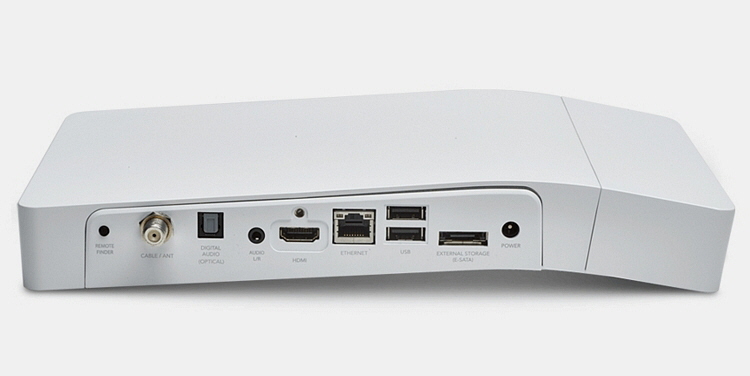 The canted appearance of the rectilinear ports wanderingly following the form's angle seem jarring and ill-considered. On top of that, look at the variance in the reveal of the rear panel:

And this is in a press photo. Not exactly automotive tolerances they've achieved here. I guess it's fair to say that the old craftsman's saw about designing the unseen back of the cabinet to look as good as the front no longer applies these days.

Given that this object is not something we directly, physically interact with, beyond the first time we plug the cables into it, one could argue that it doesn't matter what the thing is shaped like. Which means, in my opinion, that the object ought to be as invisible as possible, rather than designed into an arbitrary asymetrical arch.

So, what do you think: Hell in a handbasket, or the wave (no pun intended) of the future? As our lives become filled with more technology-harnessing rectangles, can we expect to see more designers "expressing themselves" in this manner?

What's not known, by the way, is just who designed this thing. TiVo's not saying, and they famously laid off their industrial design staff last year.

What Do You Think of the Design of TiVo's Bolt?