ERNIT: A Piggy Bank for the 21st Century

A modern companion for teaching children about money (and even bitcoins)

The idea of gathering savings at home in a slotted container has been around for a long time—the first such example we have is a miniature Greek temple with a slot in the pediment and a locked opening in the back, dating back to the 1st century BC. But it turns out the beloved pig form, which has become a symbol of financial education around the world, was the result of a linguistic accident.

In the Middle Ages, people collected their savings in clay pots and jars, made out of an inexpensive, orange-colored clay called pygg (pronounced "pug"). After the Great Vowel Shift of the 14th-18th centuries, the pronunciation of English vowels evolved, changing the "pug" sound into its modern-day pronunciation, "pig." After a time, the pygg clay was no longer widely used, but the "pig pot" had a ring to it and artisans began crafting the porcine vessels we are all too familiar with.

Early examples of piggy banks. The removable plug element wasn't added until the 19th century and destruction was a necessity, so very few of these remain. [Image courtesy of vintagevirtue.net]

Now that we're historically up-to-date, the question is: What does the modern piggy bank look like? More often than not, we end up handling intangible money—studies have shown that since 2010 annual mobile transactions have increased from $52.9 billion to $431.1 projected for 2015. And without a real grasp of where (or how quickly) it's going, financial literacy is more complex than ever. How do we instill good habits and a sense of value in kids without the physical exchange of currency? This is precisely what 3 dads-to-be were contemplating while celebrating New Year's Eve a few years ago—a "what if" chat over a bottle of wine that would become ERNIT, a piggy bank for the modern family.

"I believe designers have a responsibility for delivering improved solutions and this also includes cultivating everyday habits," says ERNIT's lead designer Lars Larsen of the motivation behind the product. 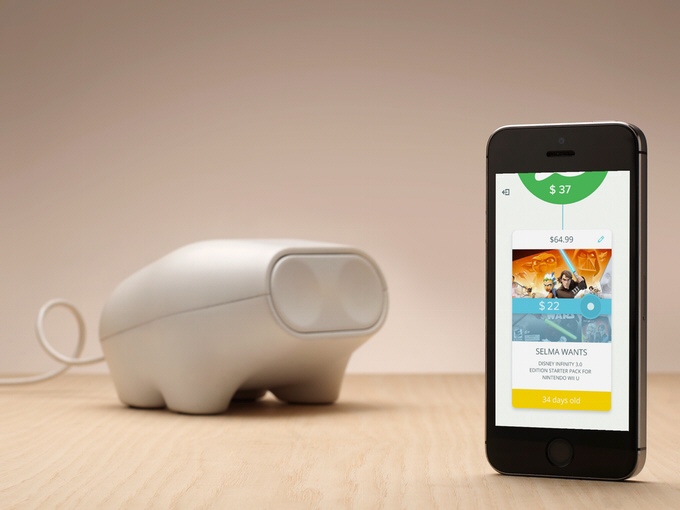 ERNIT's curly tail and snout are reinterpretations of the classical features of a piggy bank.

Visualizations of the saving progress in ERNIT's app.

The new piggy bank typology that they've devised is a digital system composed of a wi-fi enabled interactive "piggy bank" and accompanying app. Kids are invited to set different goals for both large and small purchases, a new bike or a new soccer ball, for example. Once a goal is set, family members can begin sending money (or bitcoins) to the ERNIT app. In order to do so, adults have to set up a bank account and connect it to the app—so ERNIT isn't actually holding any of the money itself, just reading the balance in the account. A ring of LED lights around the pig's snout serves as a reminder of progress; when it lights up all the way around, the goal has been reached.

A main concern of the design was finding a way for it to "bridge between parents and children," as ERNIT CEO (and former editor-in-chief of Denmark's largest financial magazine, Penge & Privatøkonomi) Soren Nielsen recently told us. "The design invites families to talk and interact. I see ERNIT as much more than just a toy for kids. It is made to start a conversation between generations both online and offline."

The focus with ERNIT is really on the learning experience, not the object itself or even the money. In order to make the intangible tangible, the design mixes tactile, visual and aural experiences to create different ways of interacting with the product and understanding the distinct actions taking place. "That is why the buttons on the snout are big, the eyes are animated to show emotions and the piggy bank has an organic touchable shape and a soft surface," explained Lars Larsen, the founder of Kilo, and the lead behind ERNIT's design.

With just about 3 days left in their Kickstarter campaign, the team is just a few ERNITs away from their funding goal. Watch their video below to see the little pig in action: