Anyone who has had to join two materials knows the struggle of tolerances in fickle weather—a hot summer rain or a frigid metal shop can drastically change the way two pieces fit together. So it's somewhat mind-boggling (and refreshing) to see a designer exploit this pain point and use it to his advantage. Paul Cocksedge does just that with a new collection of furnishings that use temperature as a way of expanding and contracting various materials to create bonds.

From a staircase wrapped in living plants to an auditorium constructed of string, the London-based designer is known for pushing the limits of what materials can do. For the Freeze collection, Cocksedge first approached Marc Benda, one of the founders of New York's Friedman Benda gallery, back in 2000. "It was something I wanted to show the gallery first because it was a huge undertaking and would require a level of commitment," he says. "It's taken five years." The resulting collection includes four dining tables, a bench and an aluminum side chair, all produced in limited-edition quantities. 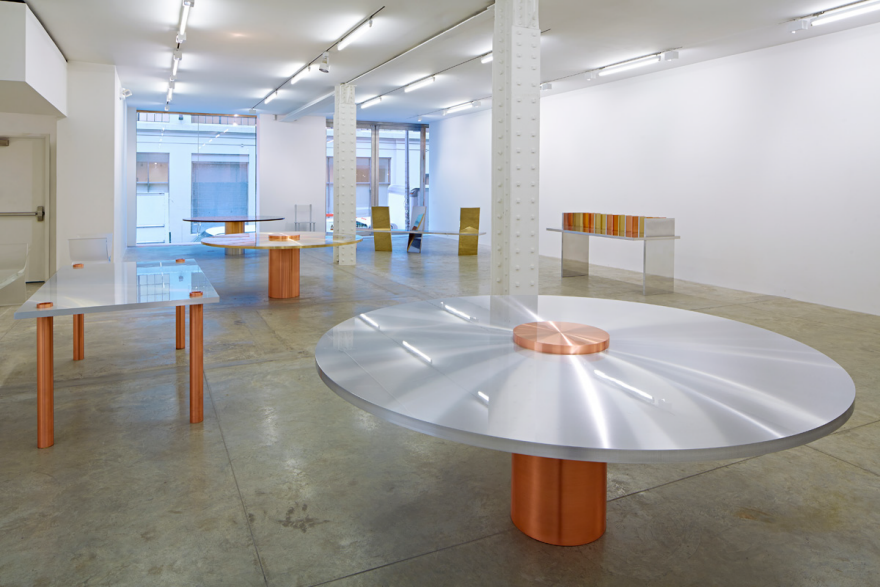 Freeze is on view at New York's Friedman Benda until December 23. Photo by Mark Cocksedge 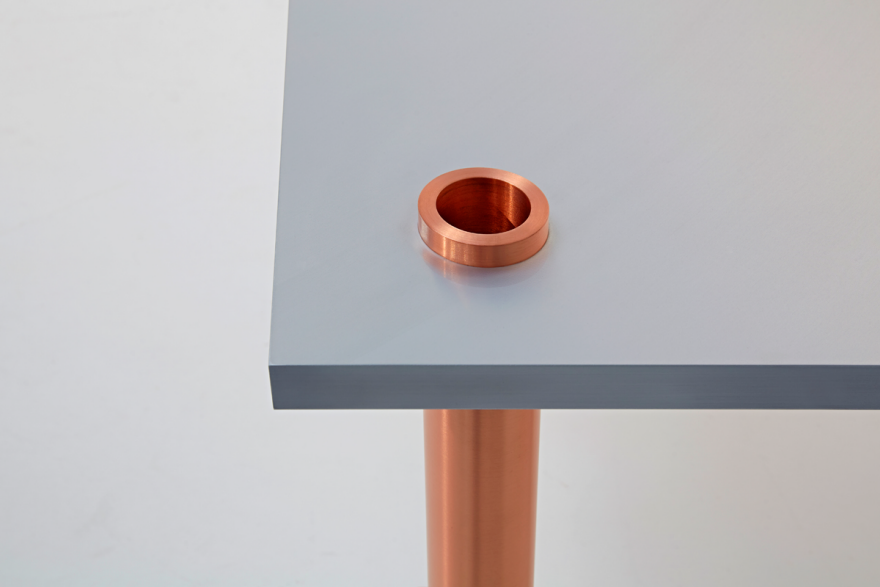 With Benda's support, Cocksedge began experimenting, heading to Austria to test out his idea with a small team. "We took some copper legs and we took some planed aluminum surfaces and we buried the legs in the snow overnight, so that they could really be frozen as cold as technically possible," Cocksedge says. "We took them out and we inserted them into these holes, wrapping the aluminum surfaces in felt blankets to keep them as warm as possible." As the copper legs warmed up, they expanded and locked into the aluminum. "It was really exciting," Cocksedge says. "It was amazing." 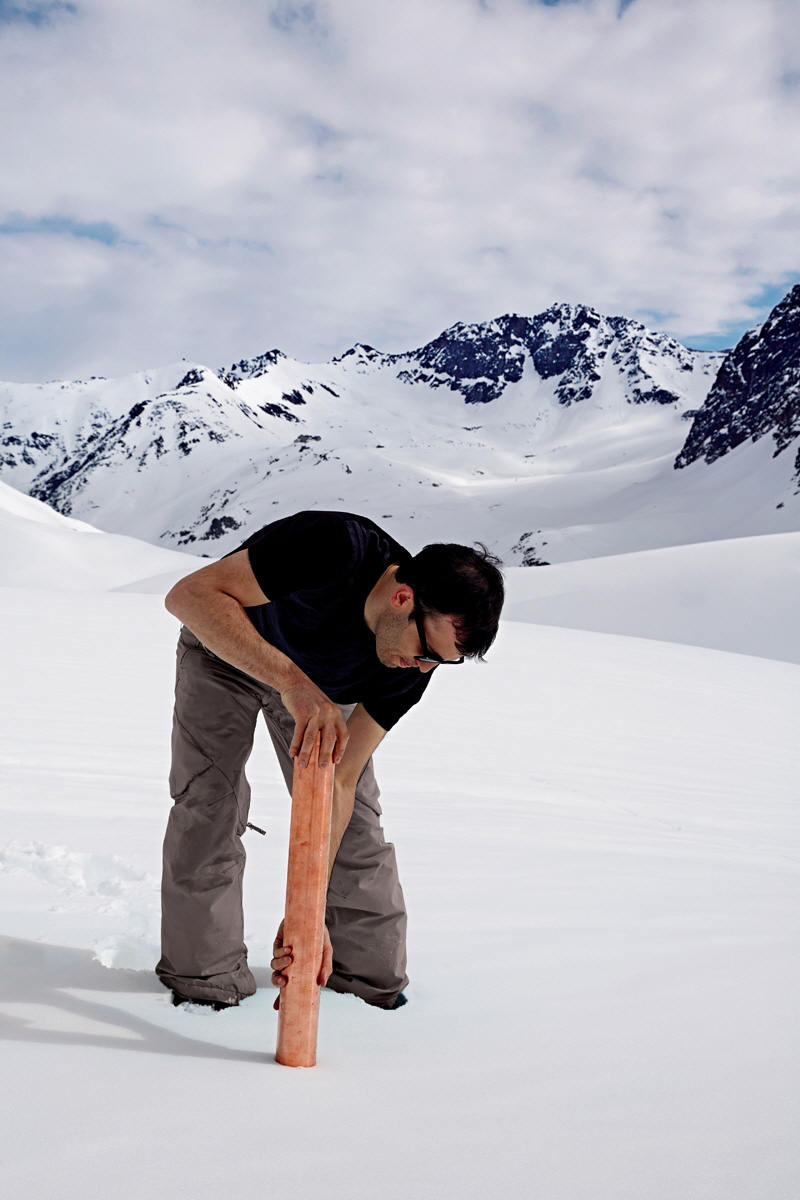 Cocksedge in the snow

The process has come a long way since then. Cocksedge now works with giant blocks of steel, aluminum, copper and brass. And he's no longer burying parts in snow. "We had to use modern techniques, as the pieces are so ambitious in weight and scale, so we're using liquid nitrogen, which is an amazing theatrical thing to experience," Cocksedge says. "There's a lot of smoke and bubbles and wonderful sounds. We freeze these metals to the coldest possible temperature we can achieve and then they shrink and we can join them."

The tolerances Cocksedge is working with are as little as two thousandths of a millimeter—too small for the human eye to detect. "But it's that invisible, incomprehensible amount that enabled everything to exist within our collection," he says. After being bonded together, the pieces are mirror polished to emphasize their construction. 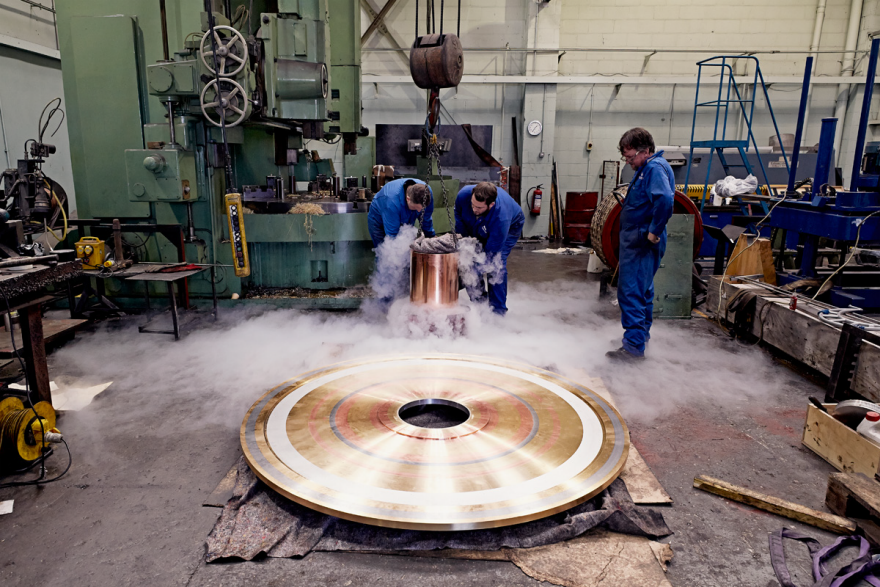 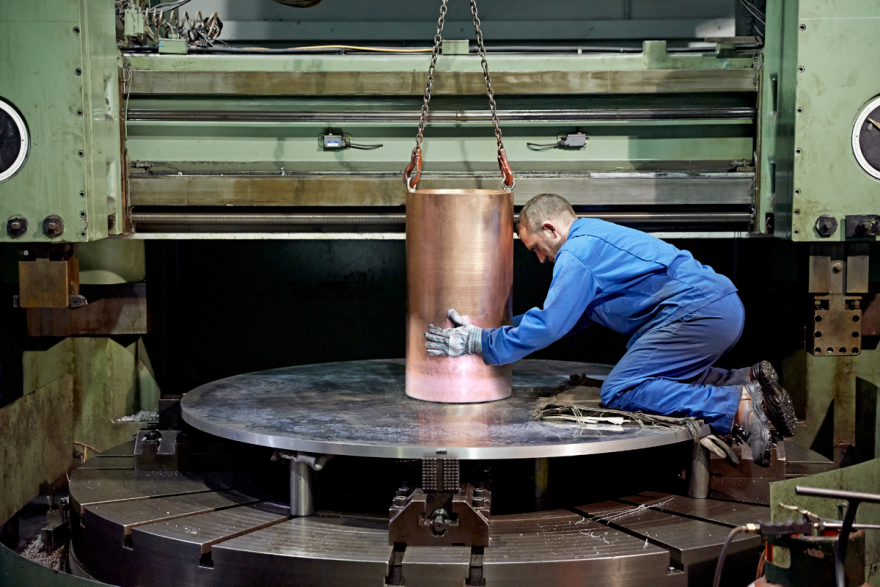 While the idea of perfectly freezing and joining huge chunks of metal sounds challenging enough, Cocksedge says that the biggest hurdle was just finding a factory to work with. "There aren't many companies that can do it," he says. "The other thing is working with people who respect the metal. It sounds like a very simple thing, but it isn't, because a lot of people are used to just cutting metal and putting it in the back of a truck and sending it out. The metal pieces that we're working with are our children. These are so important, and every single piece of metal has to be cared for, looked after [by] a group of people that understand that any scratch, any blemish, any knock, any chip—it ruins the piece."

“We’re using liquid nitrogen, which is an amazing theatrical thing to experience. There’s a lot of smoke and bubbles and wonderful sounds.”

But if the Freeze pieces are bonded by super-cooled material expanding, does that mean that the tables will collapse on extremely cold days? Cocksedge assured me that this could not happen. The bond is surprisingly resilient, and nearly impossible to deconstruct. Even if the world freezes over or is engulfed in a layer of fire—scenarios I posed to Cocksedge—his pieces will remain intact. "Once you've frozen these materials and then they expand, you've created a lock," he explains. "If everything froze at the same time, then everything would shrink at the same time, which means they'd still stay bonded together. The only way you could get it apart is if you heated up one area or made one part expand or shrink, but that would be almost impossible because they're joined together at that point. Although, I like the idea that if there was an extreme disaster somewhere, what would happen to a table that I made for Friedman Benda gallery—and it would still be standing." 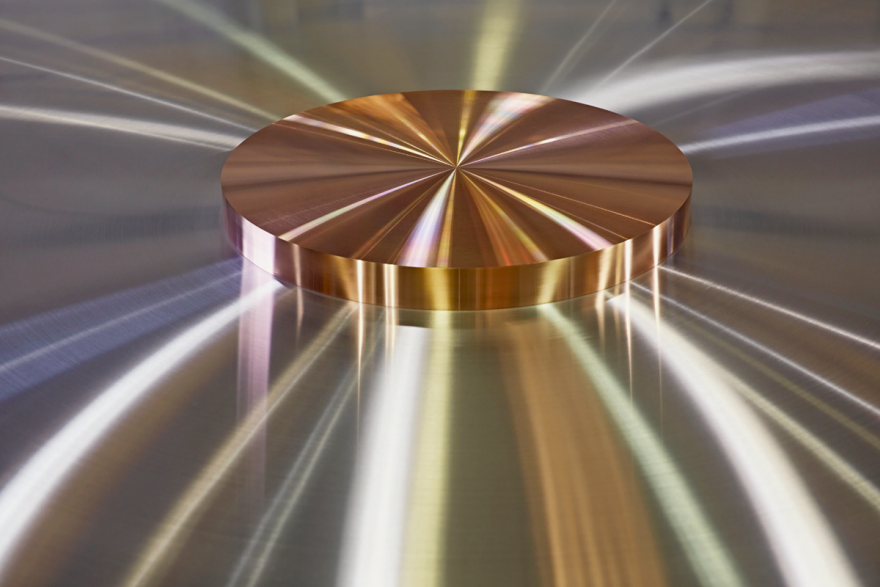 The Freeze Round Table 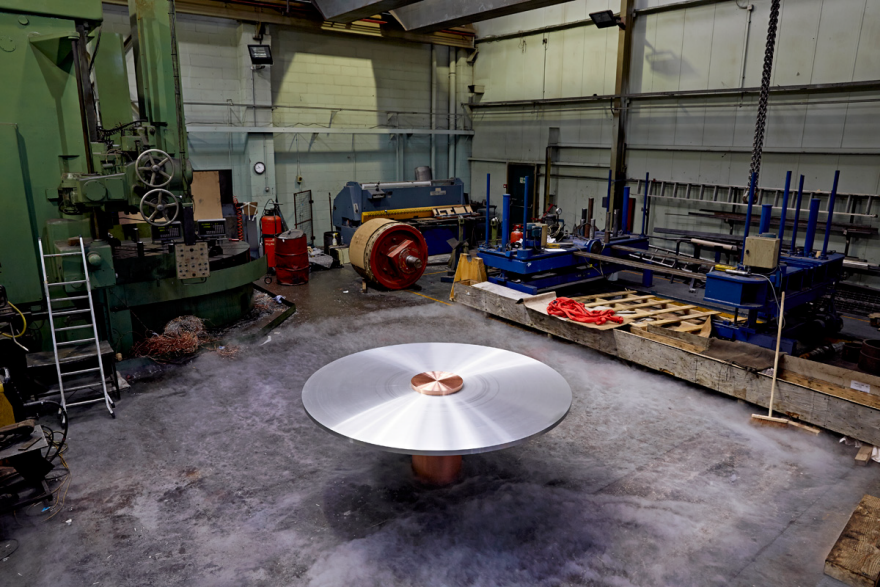 The initial inspiration for Freeze came from the impossibility of joining different materials together on an atomic level. "With the Freeze process, the idea is that we can create this cocktail of materials that are joined and they're incredibly strong," Cocksedge says. "It's opened up a lot of really exciting design possibilities to produce objects that unite these materials that aren't usually connected together by these seamless invisible bonds."

Cocksedge envisions this new process revolutionizing the way we construct furniture. "When I look around my own studio, I'm so used to seeing bolts and brackets and screws and glue lines," he says. "But with this technique, with this freezing, we can create these invisible bonds between metals and, more excitingly, the different colors and materials." 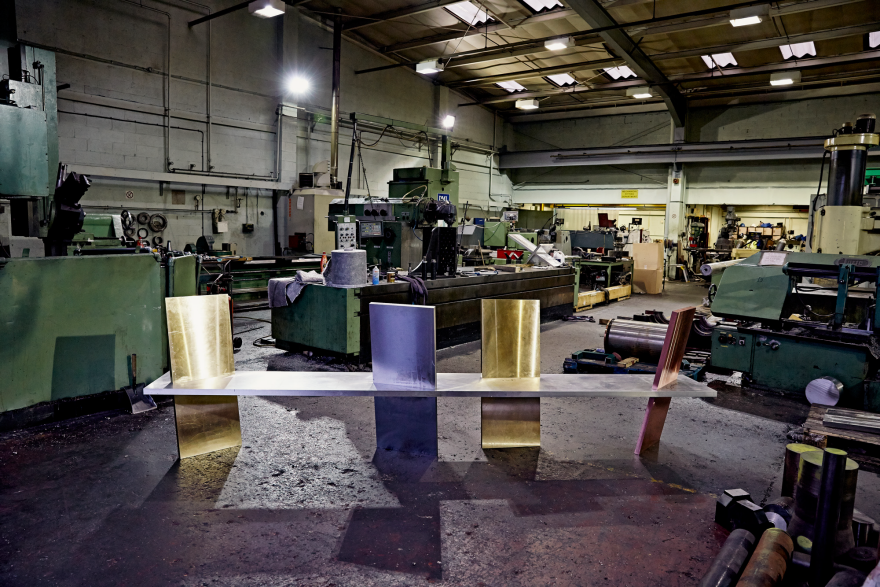 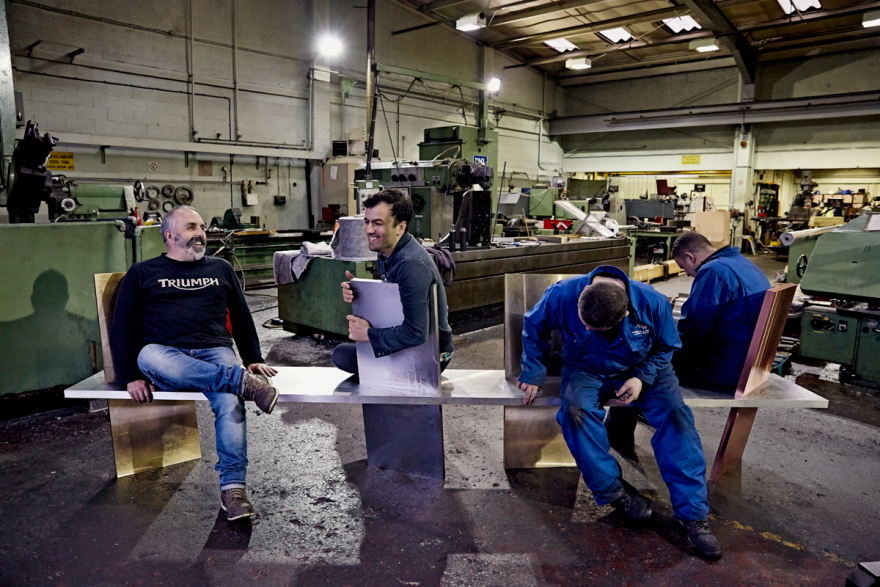 While Cocksedge's vision for the future is not impossible, it might be a bit far off. Liquid-nitrogen freezing is not exactly the most economical way to mass-produce furniture, relegating the process to high-end works for the time being. Part of that high price tag is the immense amount of custom handwork that must go into each piece. "My hands have touched every single piece," the designer says. "This thing is made by people; it's not made by machines."

In the meantime, New Yorkers can pretend they live in a hardware-free future by checking out Cocksedge's exhibition, Freeze, at Friedman Benda Gallery until December 23.