More and more designers are opening studios in Los Angeles, but the city still offers relatively few opportunities to see their work in person. A welcome new venue, at least temporarily, is the downtown showroom Austere, normally dedicated to Scandinavian design but through February 14 hosting Site Specific: L.A., an exhibition of Los Angeles–area design curated by the New York­­–based online magazine Sight Unseen.

Granted, in an ideal world, L.A. design shows would be put on by L.A. curators—but in this case it would be foolish to gripe about so much great work coming together in one place. Sight Unseen’s Monica Khemsurov and Jill Singer gathered a stellar sampling of studios—Tanya Aguiñiga, AQQ Design, B. Zippy, Michael Felix, Ben Medansky, Only Love Is Real, Ouli, Brendan Ravenhill, Eric Trine, Waka Waka and Jonathan Zawada—and they have a refreshingly stereotype-free view of the city’s design scene, as we learned in a quick phone interview with Khemsurov last week.

Core77: With this exhibition, are you trying to make some kind of statement or argument about design in L.A., or is it a bit more informal than that?

Monica Khemsurov: It’s a little more informal than that. We got invited to do a project in the Austere space, which is a beautiful, open, loft-like store in downtown L.A. In the past we’ve been invited to do “takes” on Sight Unseen Offsite, the show we do in New York during Design Week—to move the show to L.A. or Miami or what have you. And Jill and I aren’t really ready to do that. But with Austere, we thought we could do a mini Offsite, where we would focus on local talents that we love and that we think are up and coming. So we invited these designers to show work that makes sense for the context, and we gave them leeway to show what they’re working on at the moment. 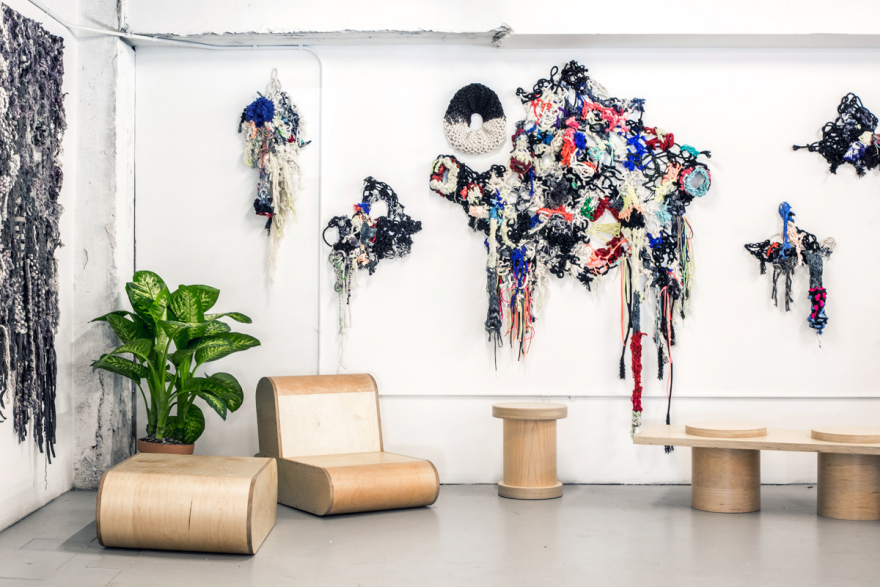 Furniture by Waka Waka and wall hangings by Tanya Aguiñiga (who answered our Core77 Questionnaire last January). All photos by Bethany Nauert

Do you think that there is something that distinguishes L.A. design right now from, say, New York design?

With the people that we chose, I would say probably not. I know that some of the design in L.A. tends to fall into that “California chill” kind of vibe. But most of the L.A. design scene doesn’t fall into that—most of it is really contemporary, and I don’t think there’s a specific aesthetic going on. The people that we chose are on the cutting edge of design in the same way someone in New York or in Europe would be. So in terms of the people we’re showing, no, I wouldn’t say that there’s a particular California aesthetic in any way. 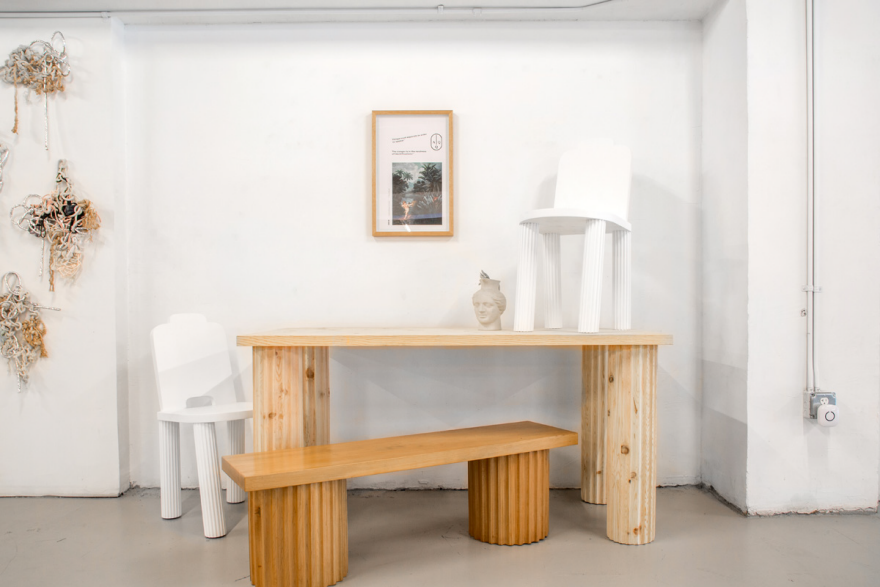 Would it have been possible to put on a show like this five years ago, when Sight Unseen was first starting out?

Maybe. Certainly some of these people have been working in L.A. for five years, like Brendan Ravenhill, Tanya Aguiñiga and Ben Medansky. So, ten years ago? No. Five years ago? Maybe. Right now? For sure.

To some degree, that follows a pattern of what’s been happening all over the States, which is designers having more of an opportunity to get their work out there, whether it’s through design fairs or online publications or just having a web shop. There’s been a general movement in the States, a more entrepreneurial, DIY feeling with these independent design studios. So I think that’s part of what’s happening in L.A. But you also have some L.A.-specific factors, like the fact that there are a lot of people moving there right now, there’s more culture happening there right now, there are all these new galleries opening. That sort of puts this feeling in the air, I think—this excitement around art and design that wasn’t as apparent five or ten years ago. 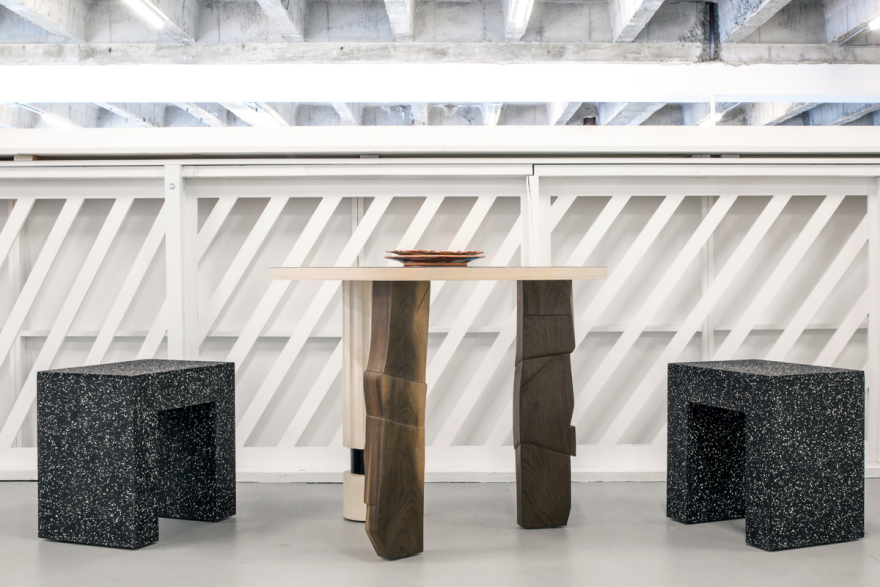 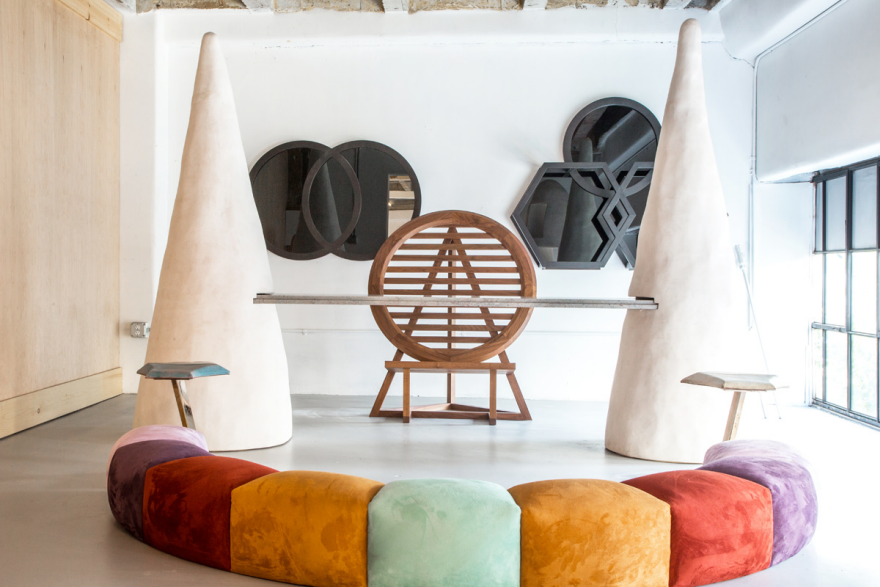 Only Love Is Real

Are any of these designers new or new-ish discoveries for you?

Michael Felix is a relatively new discovery; we’ve only known him since last winter. He just launched his collection at Sight Unseen Offsite in New York last May. And he’s really interesting because his family has a furniture-upholstery factory outside of L.A., and so he came in and basically asked himself, How can I work with my family’s factory to make more interesting contemporary pieces?

Only Love Is Real is a new furniture project by Matthew and Carly Jo Morgan. I think they started earlier this year, and this is the first furniture collection. Their stuff is really interesting—very expressive, very sculptural. It does have a little bit of a playful sense of California mysticism, I would say. But the pieces would not be out of place in a gallery in New York.

There’s also Jonathan Zawada—he's new to L.A. He used to live in Australia, and he moved to L.A. a little while back. And Ouli are interesting as well. They had a store in L.A. briefly, but they’re not really out there with their furniture and product design because they both have other jobs. So they’re a little under the radar; I don’t think a lot of people have seen their work.

Site Specific: L.A. is on view at Austere in downtown Los Angeles until February 14. 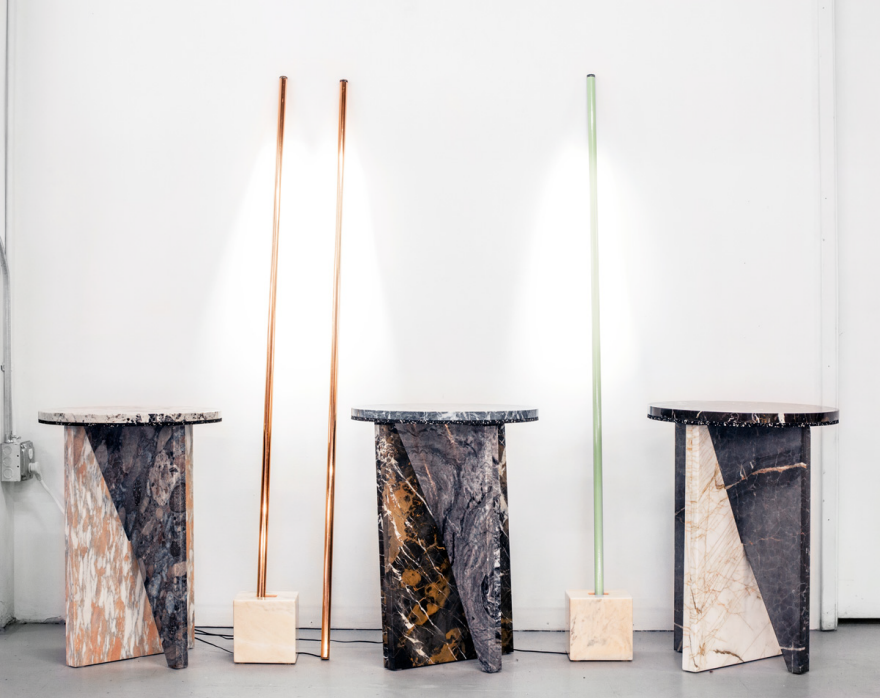 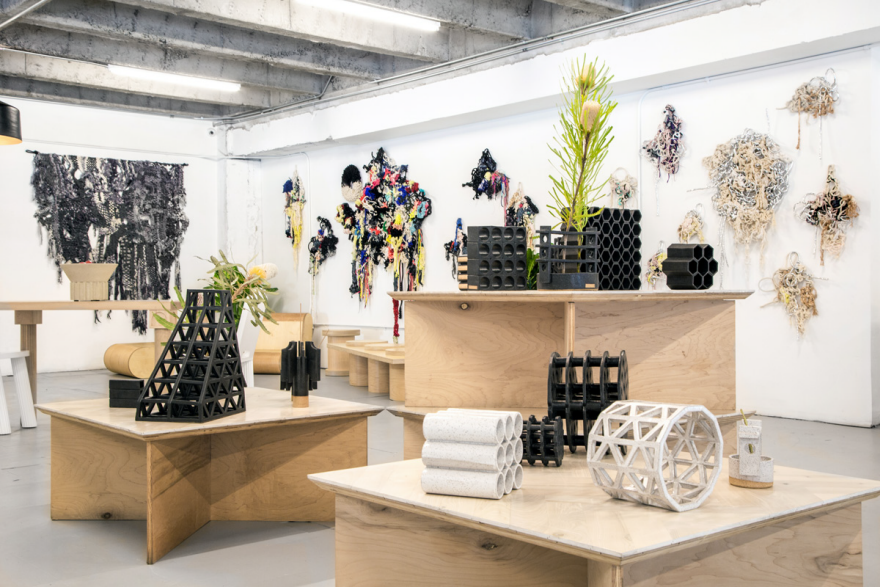 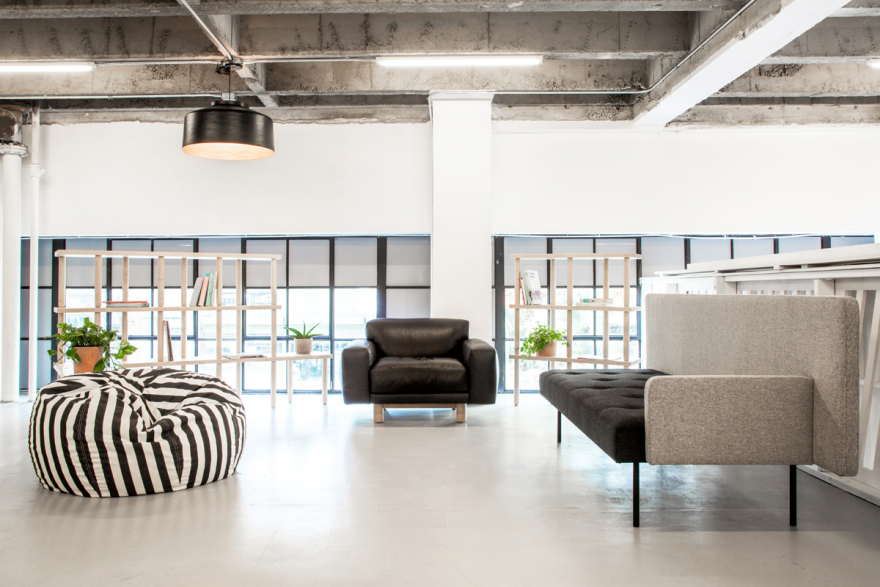 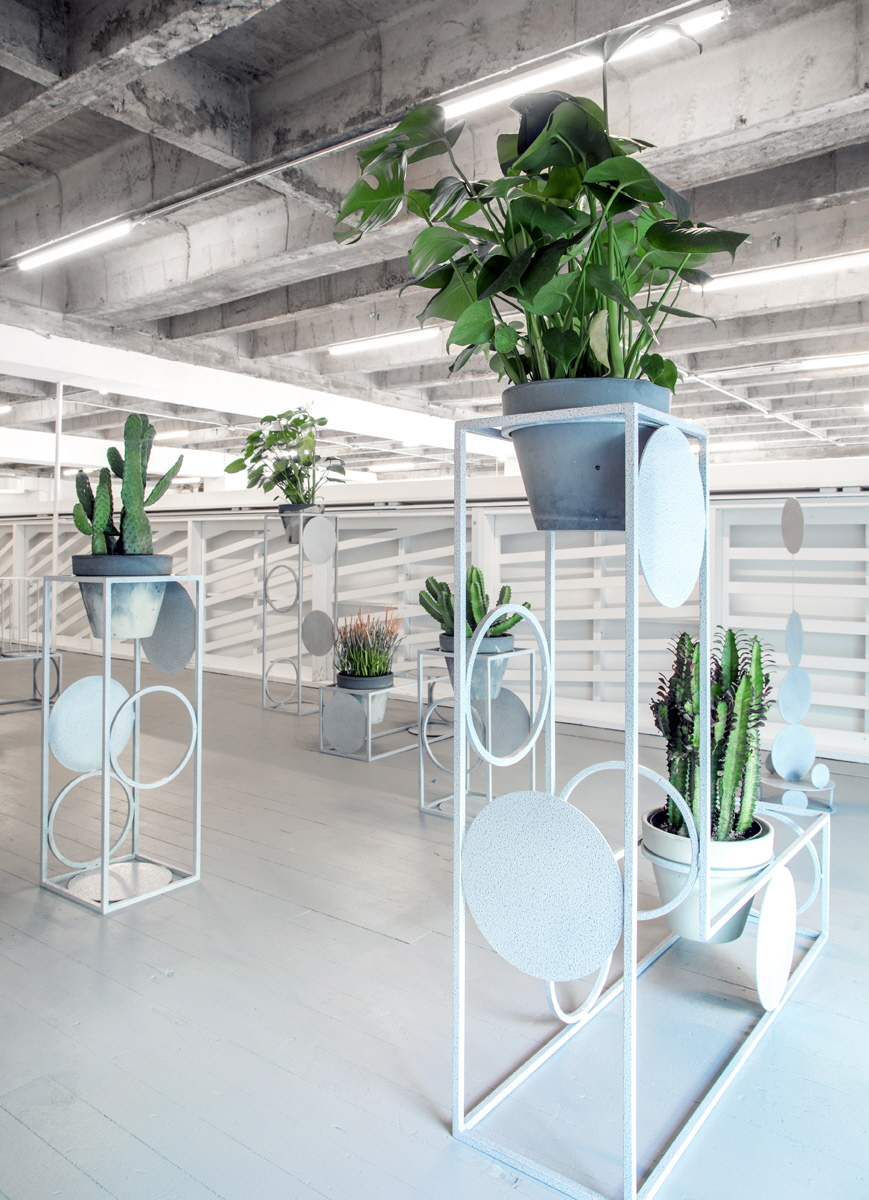 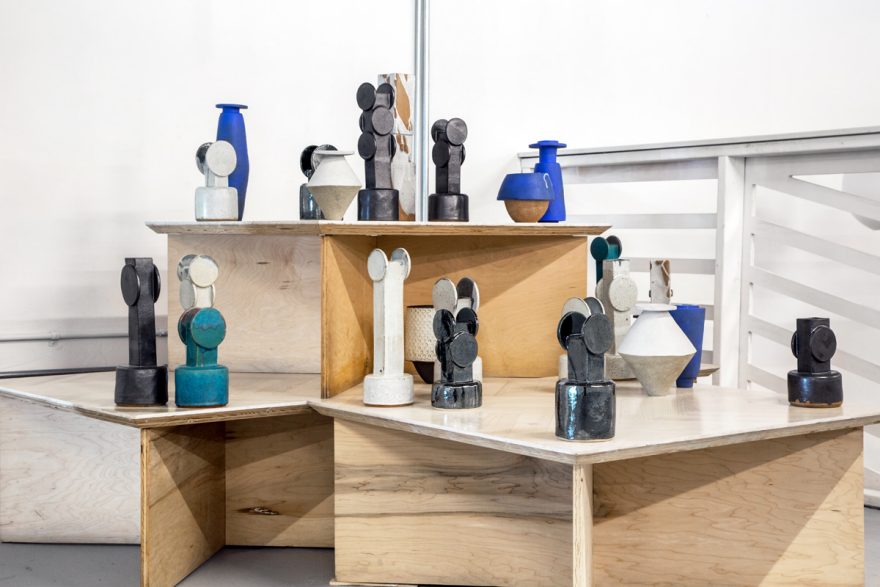 Ceramics by B. Zippy