The secret ingredient is baby powder.

Maybe I had carbs on my mind, but when I spotted Railing amidst the Design Miami coverage this year, it was love at first sight. Resembling something close to thick black spaghetti, the collection of furniture had me wanting to know more. A lot more.

Turns out, the contorted metal furniture is the work of Aranda\Lasch, a New York– and Tucson-based architecture studio helmed by Benjamin Aranda and Chris Lasch, whose website boasts complex projects ranging from a metallic geode in collaboration with Casey Reas to a proposal for a Palisade Glacier Mountain Hut. It's no surprise that Aranda\Lasch's latest work is another feat of geometric prowess. The two chairs and one stool are each composed from a single line curving through a lattice of fractal circles—more on that in a minute—which closes upon itself to form a continuous loop. 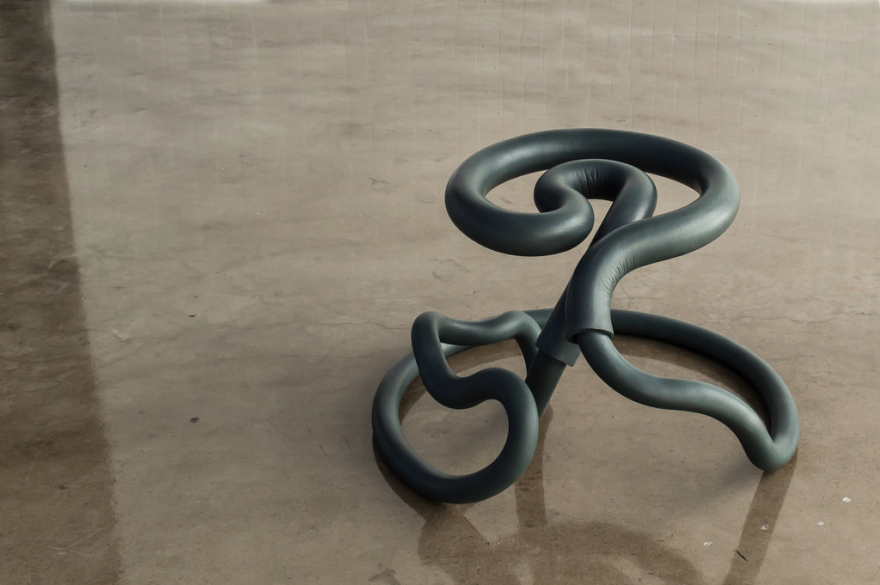 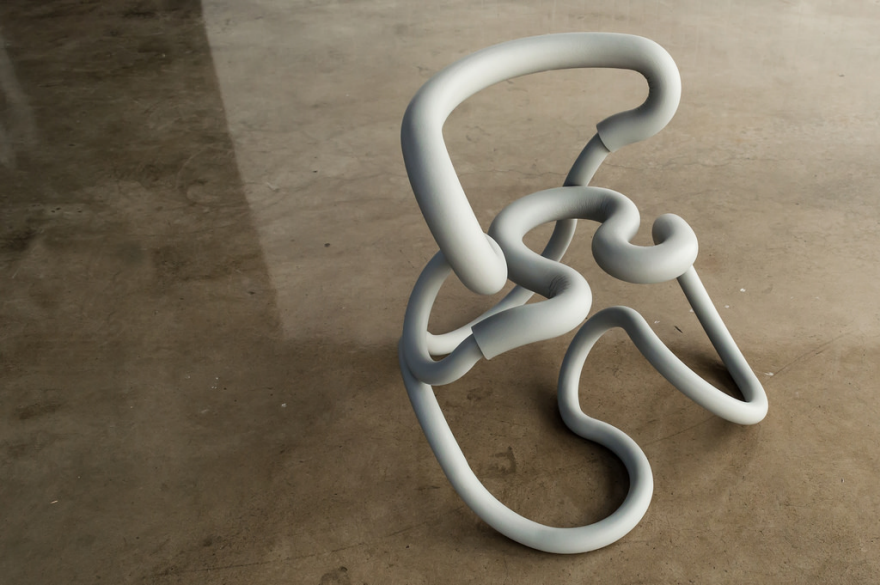 One of the two Railing chairs

Aranda and Lasch initially came up with the idea for Railing in response to a 2012 call for proposals to design a system of public furniture for Phoenix's Hance Park. Although their submission didn't make the cut, the two architects liked the idea so much that they decided to pursue it anyway.

Similar to many of Aranda\Lasch's projects, Railing is created from a geometric system. Building out a polyhedral system in Rhino, the architects worked with polyhedral packing software to draw and scale fractal loops, creating a 3D lattice of circles. Unlike many of their projects, however, that system was not the end product; instead, it was an underlying framework that Aranda and Lasch used to create new forms. "It was developed as a system, so it leveraged a lot of our thinking that had gone into previous projects having to do with especially modular systems of design and construction," Lasch says. "But unlike other projects we've undertaken, this one had a different kind of expression in that the underlying geometry was not the thing that was expressed, but served as a way to guide the development of these arcs." 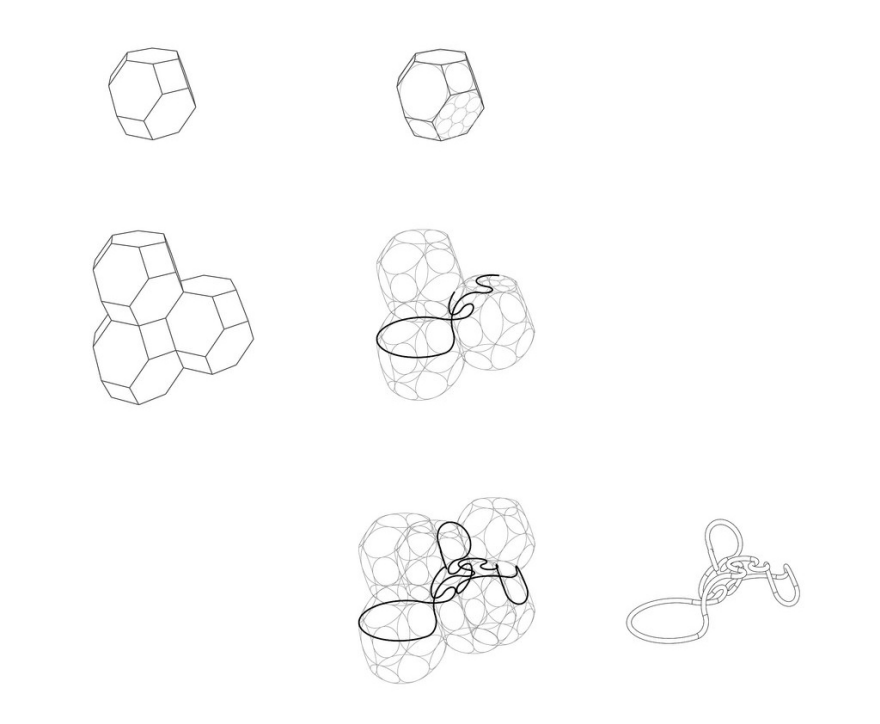 From polyhedra to fractal loops to some seriously loopy furniture

Using the 3D lattice as a guide, Aranda and Lasch would select various connecting arcs in Rhino, each split at the midpoint of a connecting circle on the edges of a polyhedron. "You pick your parts out and it creates this closed loop," Lasch says. Since the underlying system was a fractal, the arcs varied in scale but were continuous—allowing the final forms to maintain a bit of the initial modularity of the polyhedral systems that helped organize them.

After pulling out specific arcs to create continuous loops, Aranda\Lasch made 3D prints of the forms to create the first round of prototypes. "The initial physical prototypes are 3D prints, and then slowly it moves into other media as we get closer to the real, actual furniture scale of this stuff," Lasch says. "Initially, we were playing around with PVC pipe that we bought at Home Depot and testing out different types of upholstery." 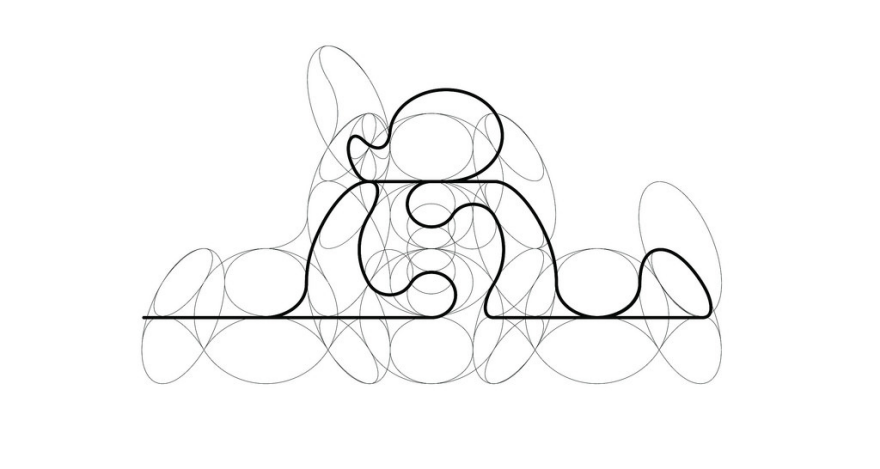 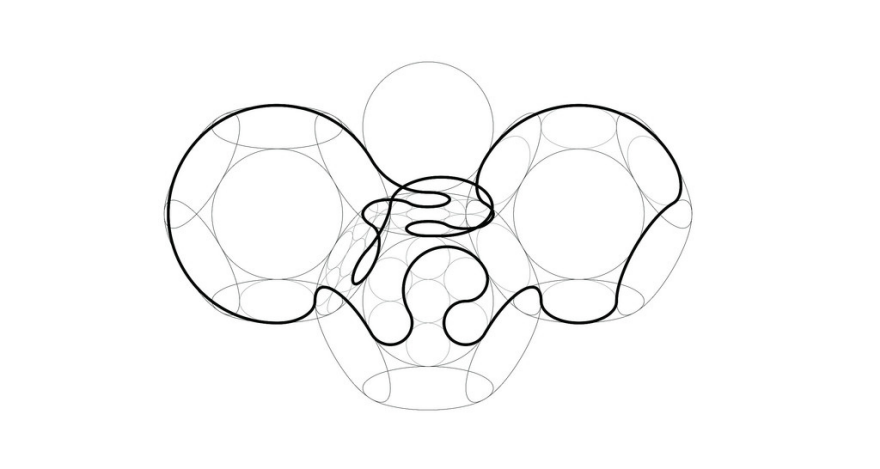 While PVC pipe helped the team understand the scale of their collection, they soon looked for ways to fabricate the final designs out of metal, stumbling upon a catalog for standard steel railing in the process. That catalog of off-the-shelf steel tubing gave the furniture its name, and Arada and Lasch flipped through page after page of functional metal railings intended for use in buildings and stairwells. "The kit of parts that we were working with in Rhino is pretty elemental," Lasch says. "It's just arcs. So, in a way, once we found a material solution to embody an arc, the design could come to life."

The architects were able to scale their underlying lattice to align with the standard sizing of the railing, effectively creating a ready-made kit of parts for their design. "We used a subset of those polyhedra and matched them up with this metal kit of parts," Lasch says. "We ordered a bunch of these elbows and then reconfigured the same set of modular parts into three different chair configurations—two chairs and a stool." While the underlying lattice had to be scaled to match the railing catalog, Lasch says that their design remained the same. "As we played around with it, it was more about the translation from digital to physical," Lasch says. "We didn't have to make too many compromises. It was really more about making these designs into usable pieces of furniture. There are only so many ways that you can guess at the materiality and comfort level for how a person is going to interact with a three-dimensional object until you start building it." 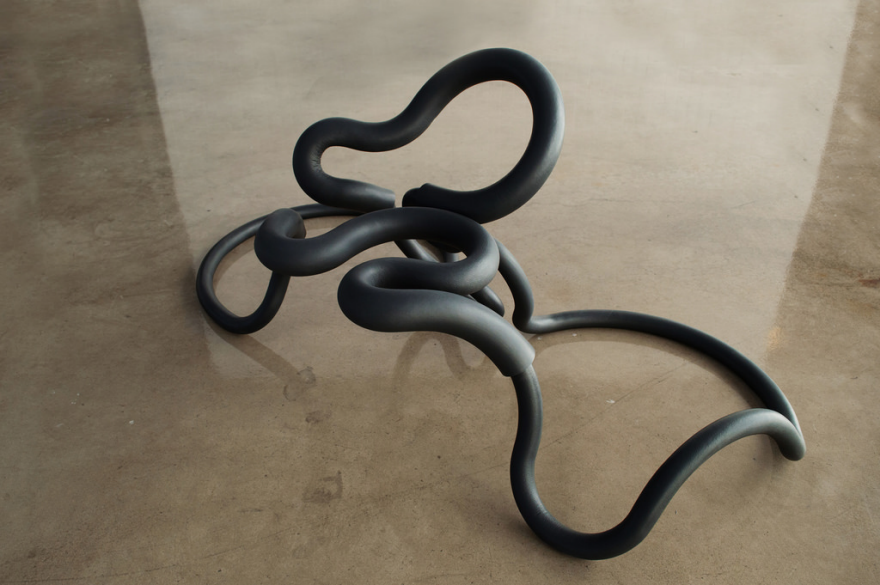 As Aranda and Lasch built out their pieces, some of them were simplified—by removing a few extraneous arcs, say, or creating a more defined seat. "It's a process that we're still going through as we build out the collection," Lasch says. Metal parts were cut down to the proper number of degrees, varying between 180º and 60º, before being tack-welded together. "It's like it's own jig," Lasch says. "Because it's continuous, it guides itself around through space to connect back up with itself at the end, like a snake eating its tail."

While the railing catalog proved to be a delightful solution to their complex system, upholstery was an uphill battle for the architects. After reaching out to a slew of local upholsterers in Arizona, Lasch came back empty-handed. "It was surprising," Lasch says. "I thought it would be a no-brainer, but I guess it just wasn't something they had seen before." 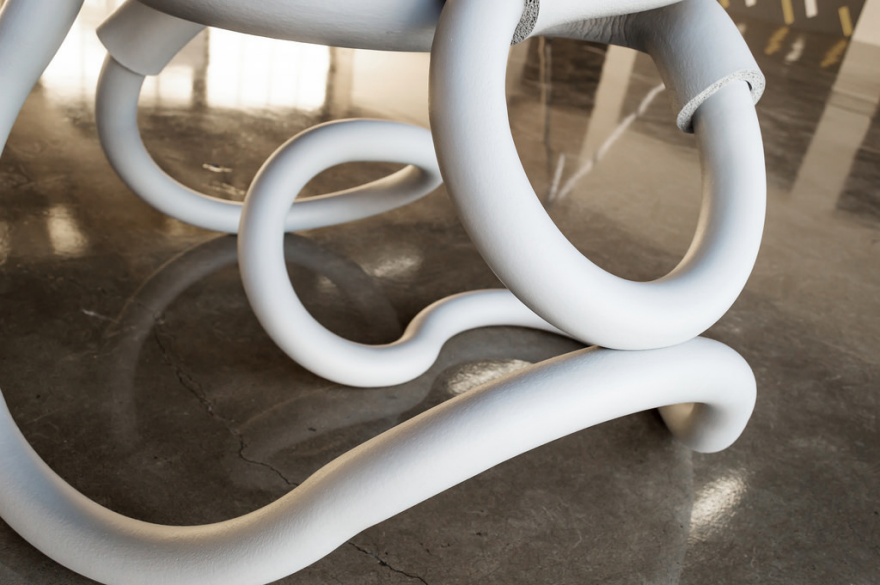 The secret ingredient is baby powder.

Aranda and Lasch ended up testing materials themselves, trying out swatches of leather, rubber and neoprene, as well as different kinds of padding and various fabrics to enclose the padding. "We tried everything, but nothing was as seamless, as pure, as the system itself," Lasch says. The continuous loops of the pieces posed a host of challenges for upholstery. "A curve in one direction is easy to upholster, but a doughnut is a lot harder and a piece that is just a bunch of doughnuts connected together is really tough," Lasch says. "Basically, if you look at a torus, it doesn't flatten out readily into a seamless, flat pattern. So, we spent a lot of time negotiating the stretchiness of different materials along with two-dimensional tailoring patterns for those materials that would allow us to wrap them around our curly tubes."

Eventually, the duo discovered silicone foam and, with it, an industrial factory willing to work with them to create entirely custom colors and thicknesses, all within the timeline they needed. "So we essentially took a 12-foot tube where the padding, color and skin were all integrated into one another," Lasch says. "Then it was just a matter of putting a tube inside a tube, pulling the foam tubes around the metal tubes." 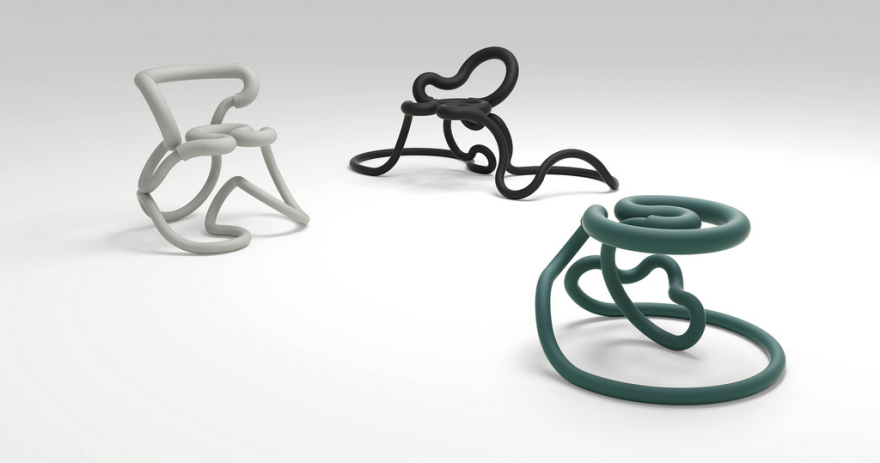 Their secret? "Lots of baby powder," Lasch says. "The studio smelled like a nursery for two weeks." The duo also used an air compressor to help nudge the silicone along. "We would put an air compressor into the end of the tube and blow it up like a big balloon animal, to get it to expand just enough so that we could pull it another few inches across our metal tubes," Lasch says.

With three finished pieces under their belt, Aranda and Lasch are now looking to complete the collection with new designs, and to streamline the production process. "Now that we have a process, we can use the prototype to achieve a more automated solution via a CNC bender," Lasch says. I'm crossing my fingers for a spaghetti table in the coming year.