Paolo Cappello on the thinking behind that oversize ceramic trumpet

Inspiration can be found in the darndest places, but the spark behind Miniforms' Caruso Cabinet is one of the strangest sources we've heard of yet: clip art. Yes, those gloriously rudimentary graphics that came pre-loaded with your word processing and presentation software back in the day (or maybe still—it's been a while since I fired up PowerPoint). 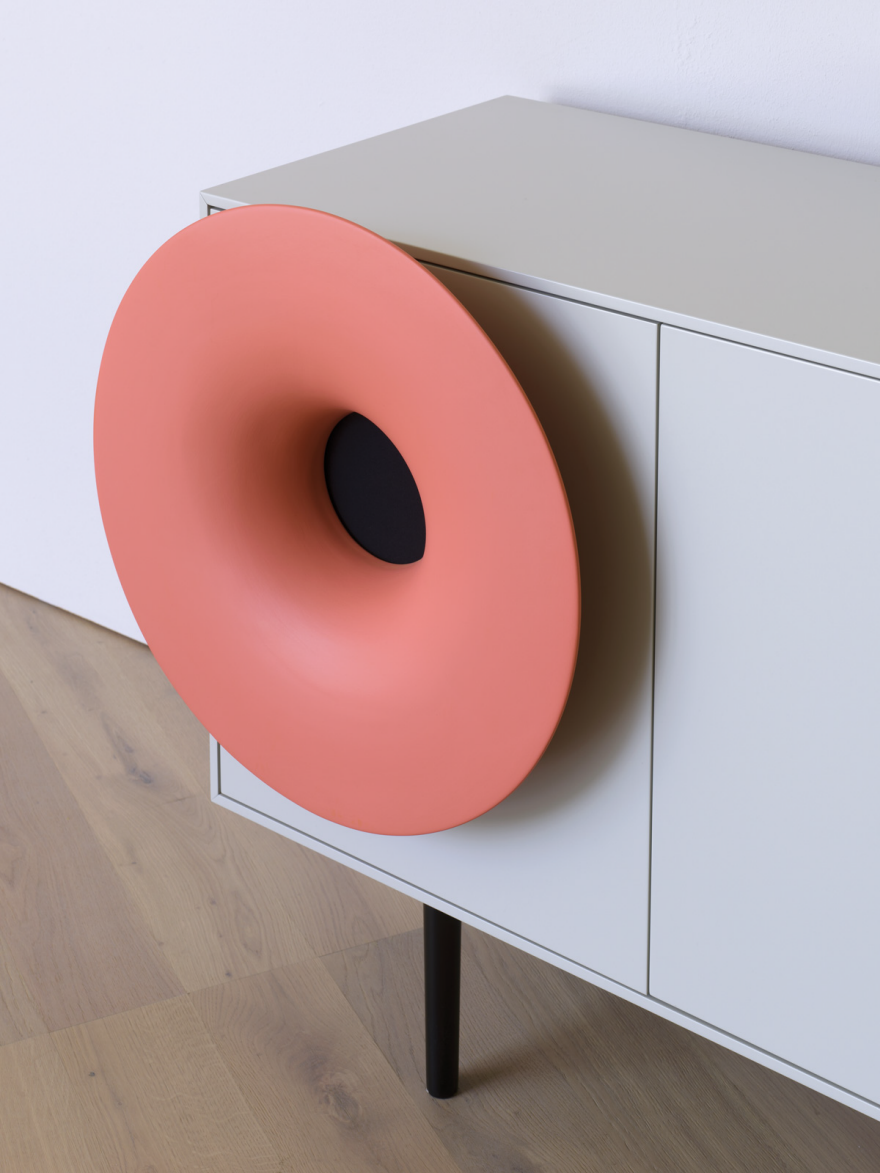 Specifically, it was clip-art trumpets that first got the Italian industrial designer Paolo Cappello thinking of the form for Caruso, an audio-enabled cabinet with a built-in trumpet-shaped speaker. In 2010 he brought his idea for a "piece of furniture with an embedded music-diffusion system" to Miniforms, and the manufacturer liked it. While many audio companies had made speakers that look like cabinets, few had tried to make cabinets where the sound system was actually built into the form itself. "And that's what we did," Cappello says.

But the design process itself was not as delightful as the early-nineties graphics that inspired Cappello. "I was very close to abandoning the project," the designer says. "The aesthetic was looking good, but we weren't satisfied by sound quality. We did many tests with different sizes and diameters [of trumpets], but none of them gave good audio results."

Struggling to find a way to amplify the sound produced by the cabinet, Cappello stumbled upon a potential solution while wandering through Nove, a small town near Vicenza, Italy, known for its ceramics artisans. "I was there working on a project for my Kiki lamp, and I saw that one of the guys working there put his mobile phone inside of a terra-cotta jar," Cappello says. "I asked him why, and he told me that if the mobile was ringing inside the jar the sound was enhanced by the shape of the vase, so he can hear it even far from his working table." 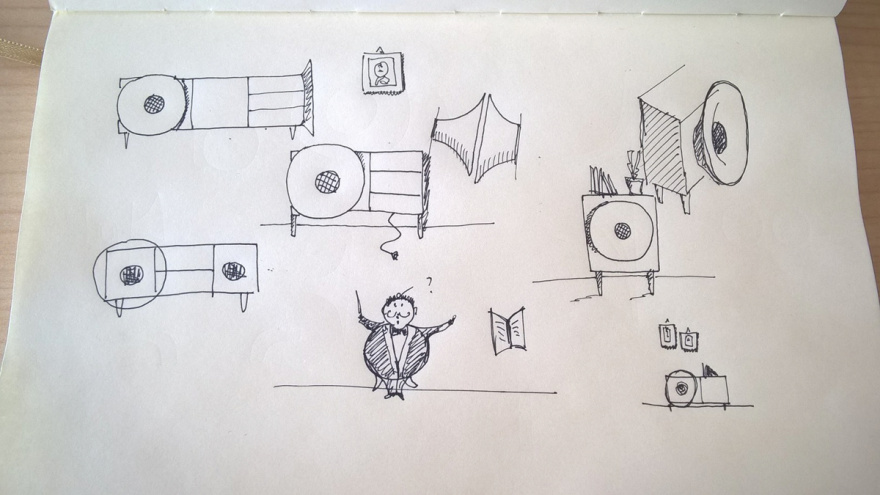 That interaction set Cappello on a path to create a ceramic trumpet that could be embedded into the actual form of the cabinet. "We found [that] the material was very good for Caruso because we could have better control of the sound vibrations," the designer says. Cappello ended up working with artisans he met in Nove to create the first prototype. 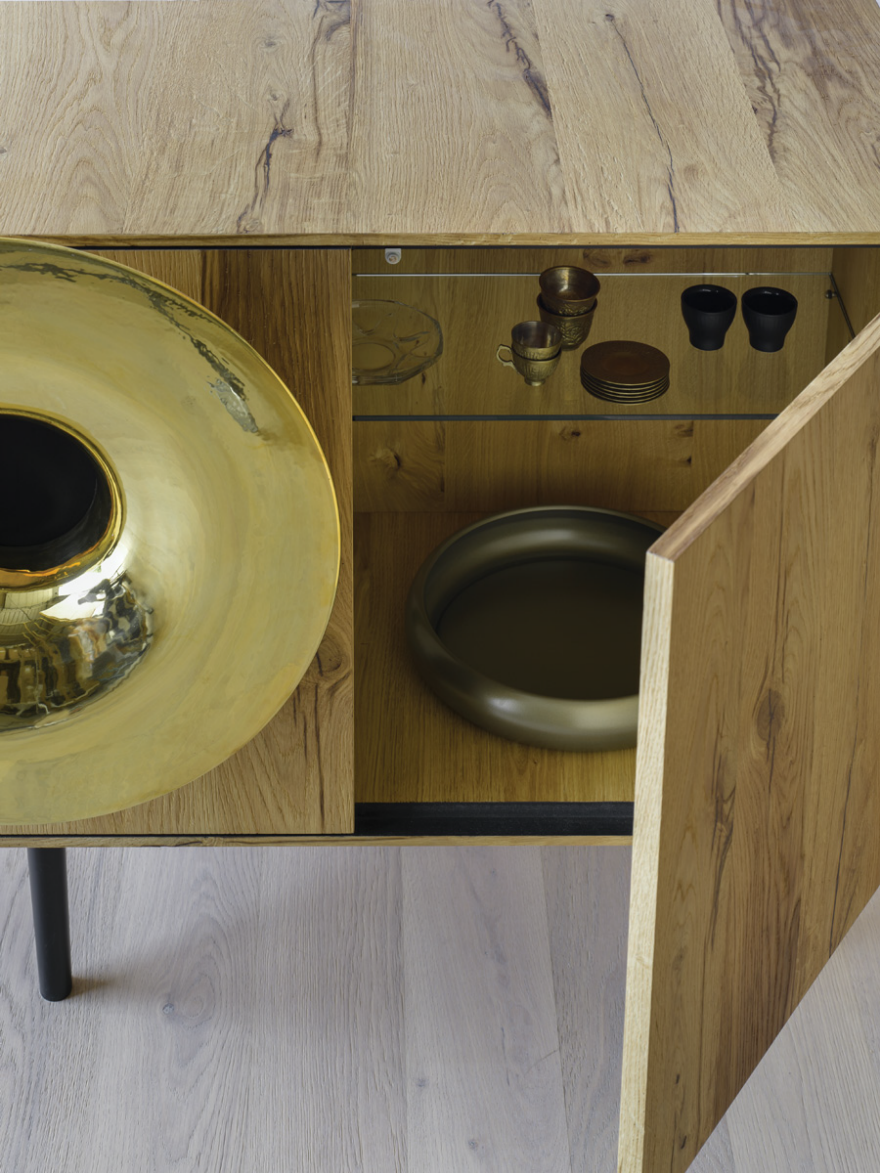 Getting the trumpet size right was the next challenge. "When I designed the very first sketch of Caruso, I imagined using an 80-centimeter-diameter trumpet because I was convinced that a smaller trumpet couldn't be aesthetically strong enough," Cappello says. "After several sound tests, we reached the final size and I have to say that luckily the diameter has been reduced compared to my first idea. I think a larger trumpet could ruin the general sense of simplicity and balance that characterizes the Caruso." After several tests, they arrived at a diameter of 20 inches and a final shape from which to make a mold.

Cappello found another valuable partner in Vicenza: a company that could help him develop the specialized audio components for the cabinet itself. "We found the right Bluetooth amplifier to best fit our concept and created a sound speaker specifically for the Caruso," Cappello says. The final cabinet includes a hi-fi system and Bluetooth 4.0 connection to pair with devices and provide a rich, high-performance sound. 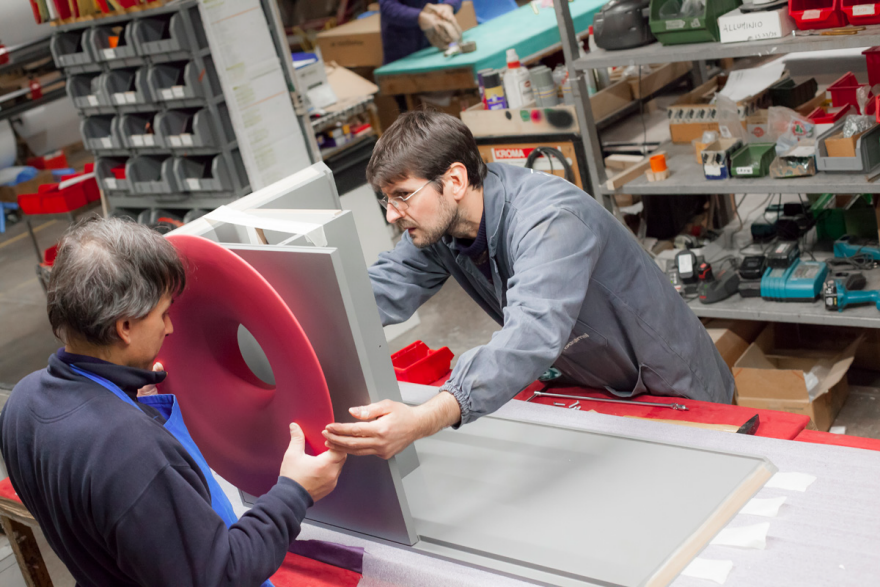 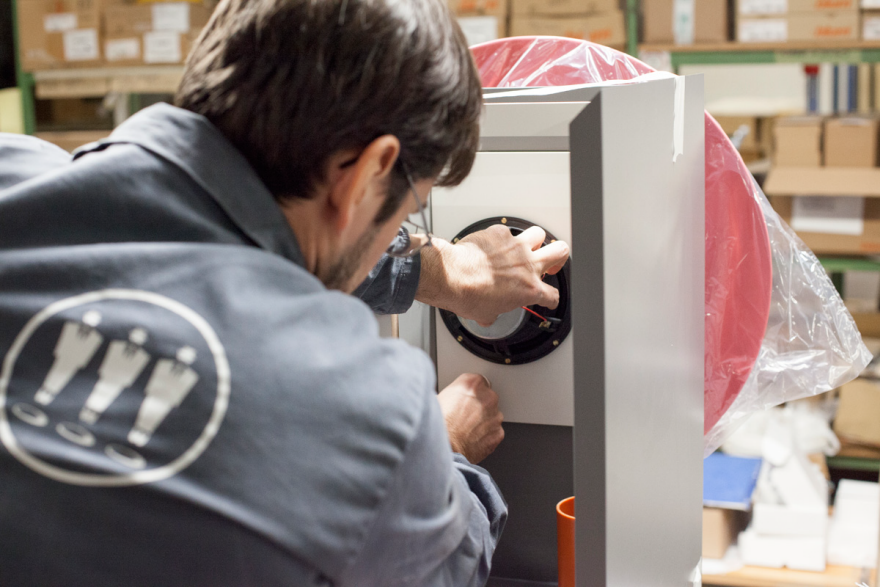 From that point, Miniforms oversaw most of the prototyping and production work. Starting with raw MDF sheets, the Miniforms team uses a CNC machine to cut and perforate the material to size. Each piece is then lacquered or veneered by hand in one of a variety of finishes. The ceramic trumpet also comes in a multitude of options, and consumers can mix and match finishes to customize their cabinet. "The choice of the finishings was made after a forecast study about the colors for interior design," Cappello says. "I wanted colors that would fit well together [no matter what] combination was chosen by the clients, to always reach a good result."

Finished boards are then mounted together using screws and special glues engineered for speakers and metal hardware. Audio components like a Bluetooth audio receiver board and two class D amplifiers are added near the end of the process, followed by the ceramic trumpet, which arrives from suppliers already lacquered or plated. The final piece measures 87 inches wide by 54 inches deep, and stands 85 inches tall. 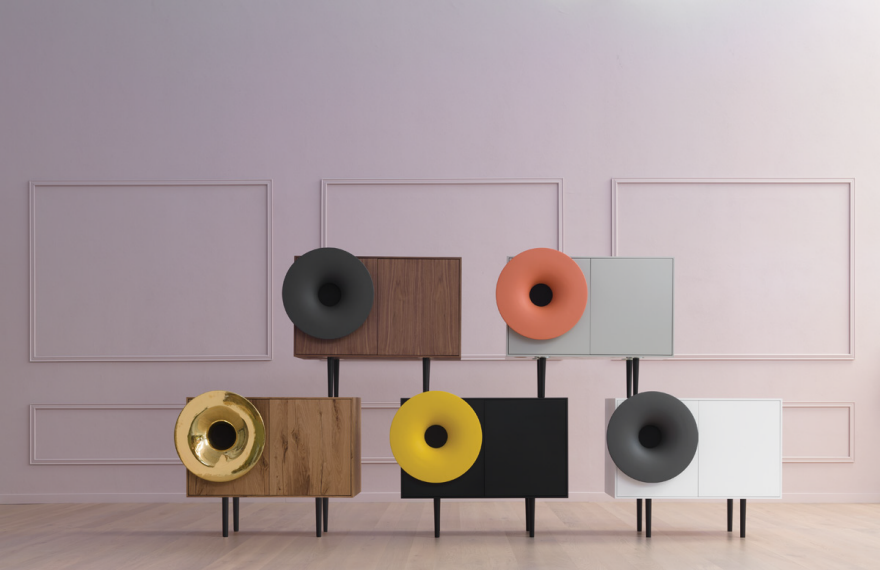 Cappello feels that the Caruso Cabinet gives audiophiles a way to "see" the music in their homes. "I wanted to design something that besides having a great sound quality could also satisfy our aesthetic taste," he says. "Caruso is a cabinet that can play high-definition music with the most modern technologies, but with a classical appeal—not only a sound speaker, not only a cabinet, but a multifunctional sculpture that could become the center of attraction of a modern house."

The cabinet was launched last month as part of a series of music-centric products Cappello designed for Miniforms. Depending on the finish, the furnishing retails from $2,700 to $4,300, including tax and shipping.