Perhaps the most beautiful architectural failure you've ever seen

When it comes to Frank Lloyd Wright, you've all seen images of Fallingwater, the Imperial Hotel and of course the Guggenheim. But you've likely never seen inside of the Hollyhock House in L.A., which has only been open to the public on and off, amidst renovations, for the last 10 years. So feast your eyes on this stunning video of the interior, exterior and even aerial footage, the latter shot by drone:

It's gorgeous, isn't it? And what you can't see in the video is that the original design featured a pool in the courtyard to feed water, via tunnel, underneath the house and into a moat around the house, which then funneled it into a fountain.

Unfortunately, that went wrong, as you'll read below. And in many senses this house, as pretty as it is, was a failure. It was built in 1921 for oil heiress Aline Barnsdall, but disillusioned with the house, she gave it up after just six years. According to Brendan Gill's Many Masks: A Life Of Frank Lloyd Wright, client and architect argued throughout the project. After it was completed--at least the main house, anyway, the rest of the larger project was scuttled--Gill writes: "The sleeping quarters for Barnsdall and her daughter…were cramped and ill-lighted…. In his autobiography, Wright confesses that the Hollyhock House is full of mistakes…in part because he had flouted his client's wishes…." It also went way over budget, even for a wealthy oil heiress. 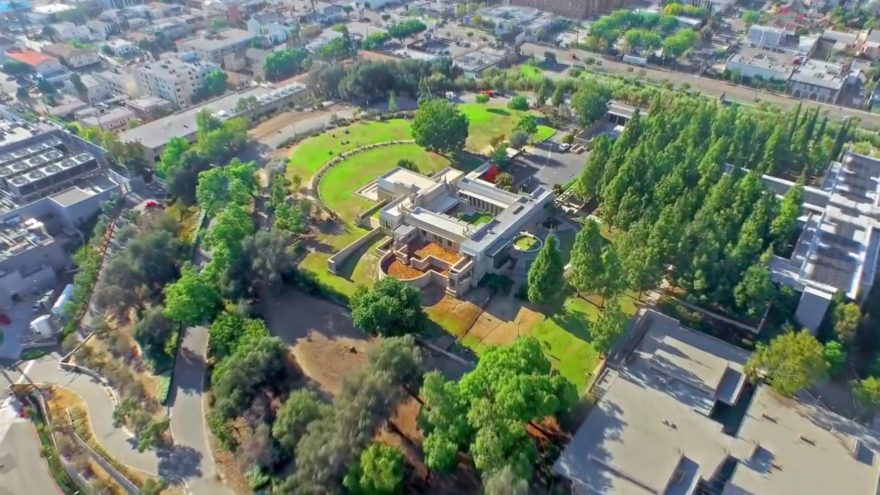 More damning still is this passage on the house from the World Heritage Encyclopedia:

Like many houses designed by Wright, it proved to be better as an aesthetic work than as a livable dwelling. Water tended to flow over the central lawn and into the living room, and the flat roof terraces were conceived without an understanding of Los Angeles' rains. The cantilevered concrete also has not stood up well to the area's earthquakes.

I am all for us having and holding up design heroes and honoring their accomplishments. But so too we must study their failures. The entire reason we as humans began building shelters in the first place is to keep water off of us. To introduce a frivolous architectural feature that then causes water to cascade into the living room is an unforgivable sin. How ironic that Wright's most iconic work would later be called Fallingwater.