Here's a photo of the ticket to the Powerball that I didn't win—I was so sure, this time—and some random pieces of paper that've been sitting on my desk. You'll notice they're all different sizes; if I had to file all of these into some kind of organized system, it would be a lot messier than filing standardized paper sheets. 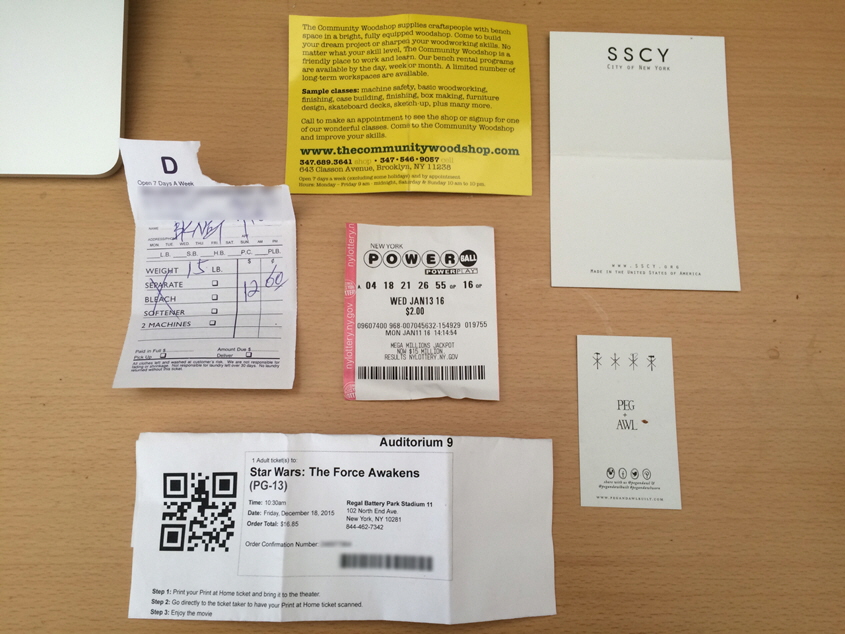 So it was in the late 1800s, which antedated both standardized typewriters and the 8.5" x 11" (or A4, for those of you living in civilized nations) paper sizes that we know today. And what we think of today as a filing cabinet wouldn't even be invented until around 1900. So if you were a businessman in say, 1873, you might need to process, record and file countless little slips of paper, tickets, envelopes, catalogues, peroidicals, receipts, bills of sale, rolled-up documents and letters.

That's why a furniture builder named William Wooton designed a super organizing desk that would accommodate all manner of paper records, and began producing his patented design around 1874. Here's an ad for this beast of a furniture piece, officially called the Wooton Patent Cabinet Office Secretary Desk: 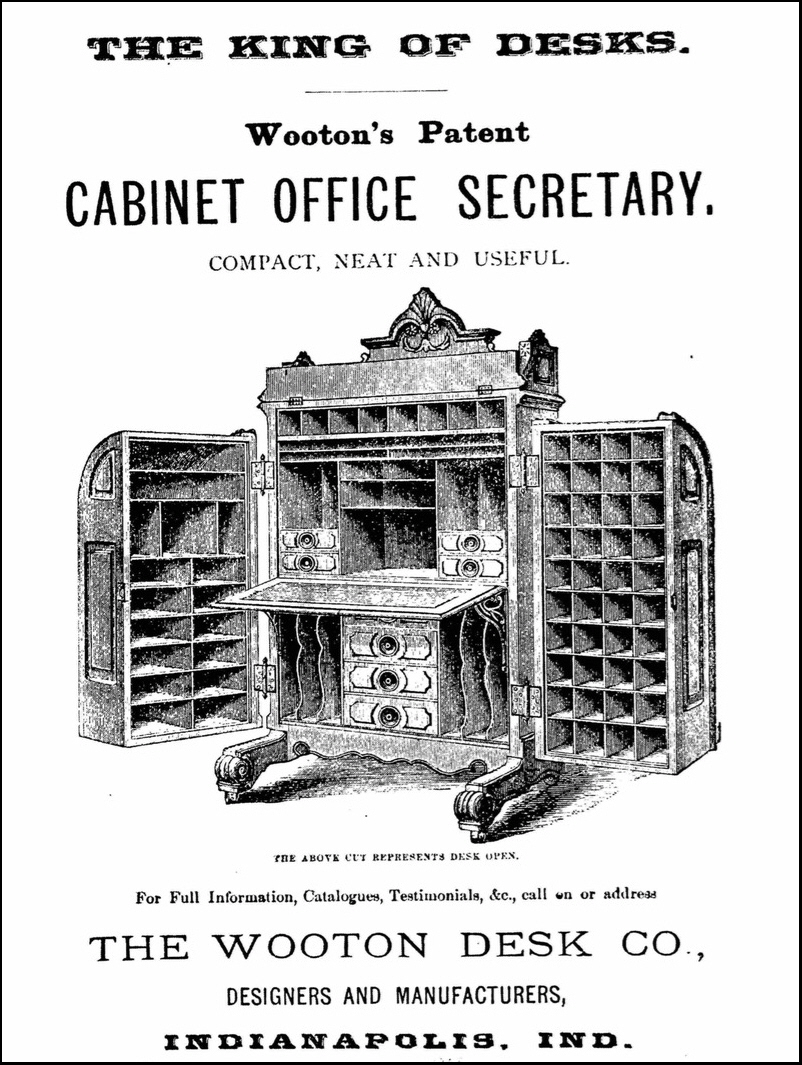 "One hundred and ten compartments, all under one lock and key," read a newspaper advertisement of the era. "A place for everything and everything in its place."

Order Reigns Supreme, Confusion Avoided. Time Saved. Vexation Spared. With this Desk one absolutely has no excuse for slovenly habits in the disposal of numerous papers, and a person of method may here realise that pleasure and comfort which is only to be attained in the verification of the maxim, 'A place for everything, and everything in its place.'

Every portion of the desk is immediately before the eye. Nothing in its line can exceed it in usefulness or beauty, and purchasers everywhere express themselves delighted with its manifold conveniences. 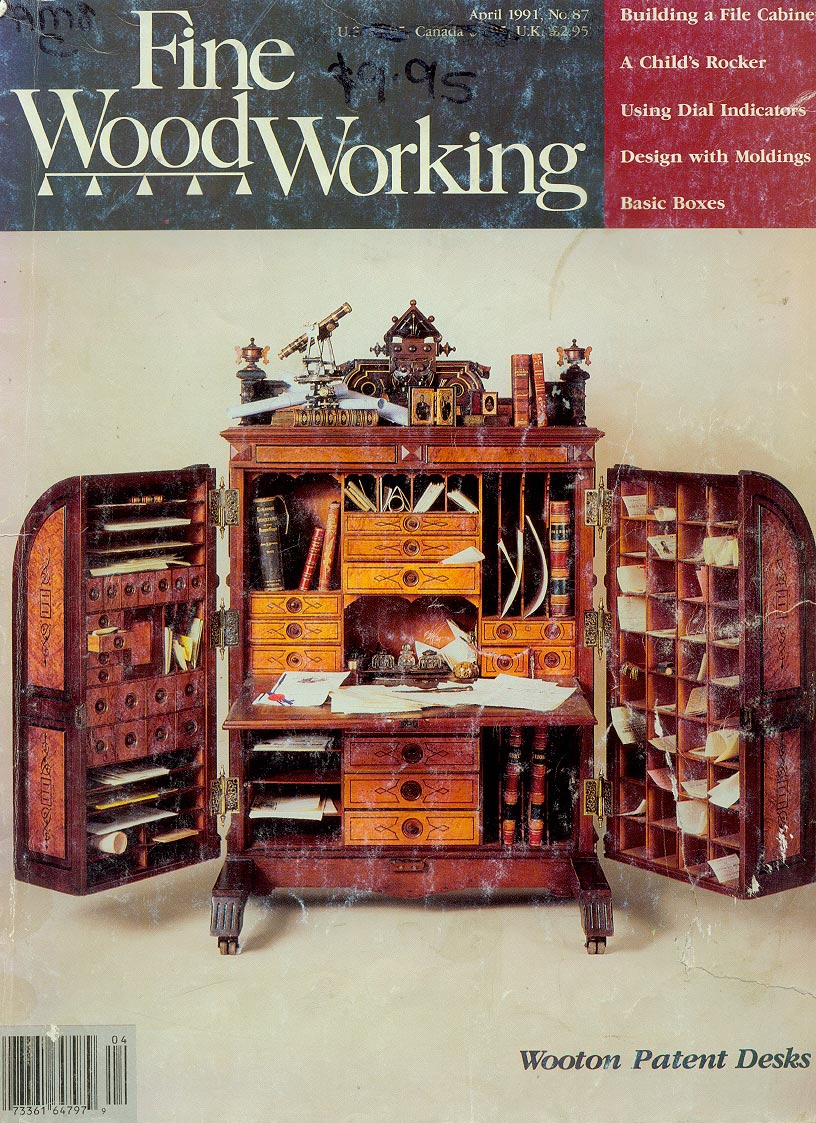 Whomever did Wooton's marketing certainly did a good job: John D. Rockefeller bought one of the desks, as did then-President Ulysses S. Grant. (Grant's model had an eagle featured on the cornice, according to the Smithsonian.) Joseph Pulitzer and Charles Scribner both owned one. 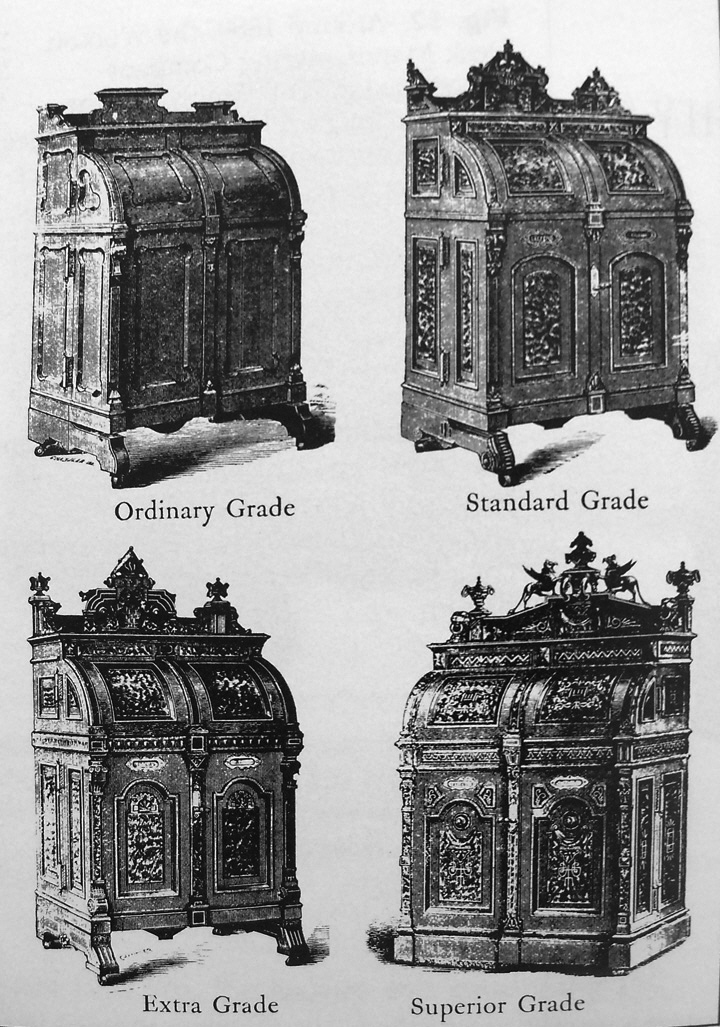 Here's a shot of a surviving Standard Grade, with handsome green drawers: 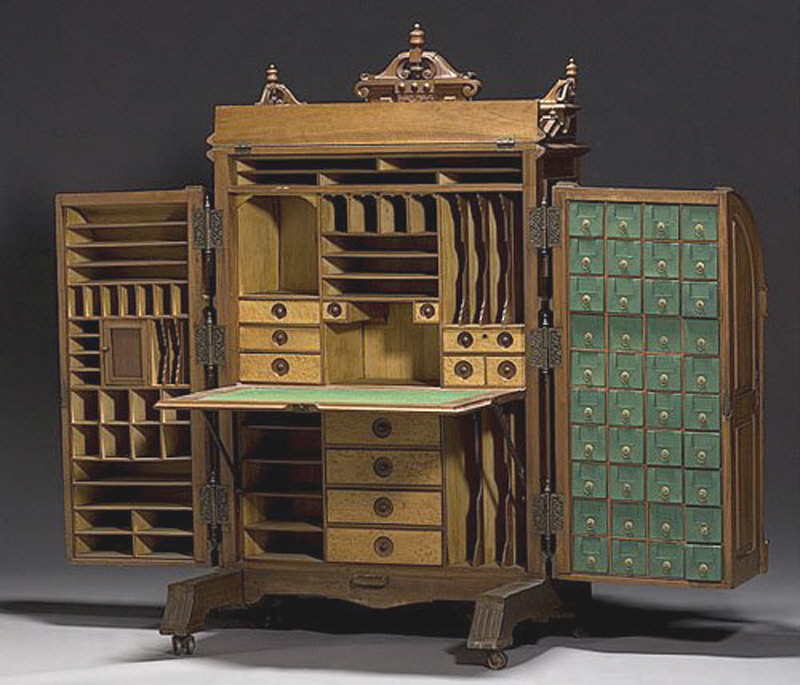 As you can see in the "trim levels" image above, the wings on the desk fold shut. A lock on the front kept the contents secure. What might not be obvious to you is that of those two little racetrack shapes visible above the main panel of each face, the one on the left was a spring-loaded hinged door that allowed your officemates to drop mail off after you'd left for the day:

This little glass door on the inside allowed you to see if there was anything in the bin: 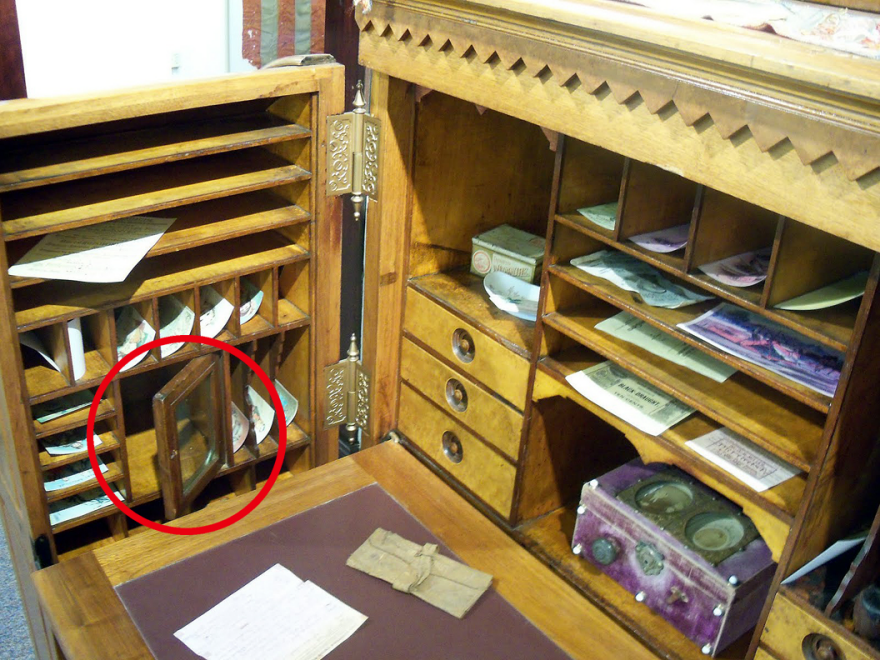 Here's a replica of the desk built by the very talented Mike Thompson showing it in both open and closed positions: 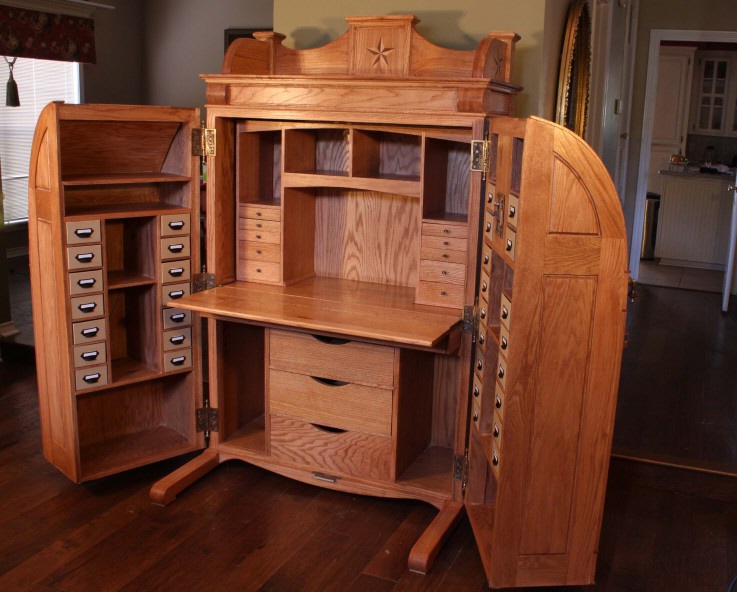 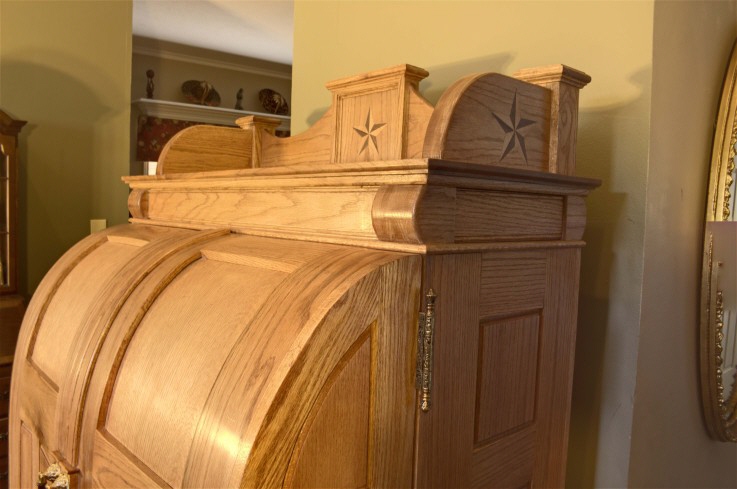 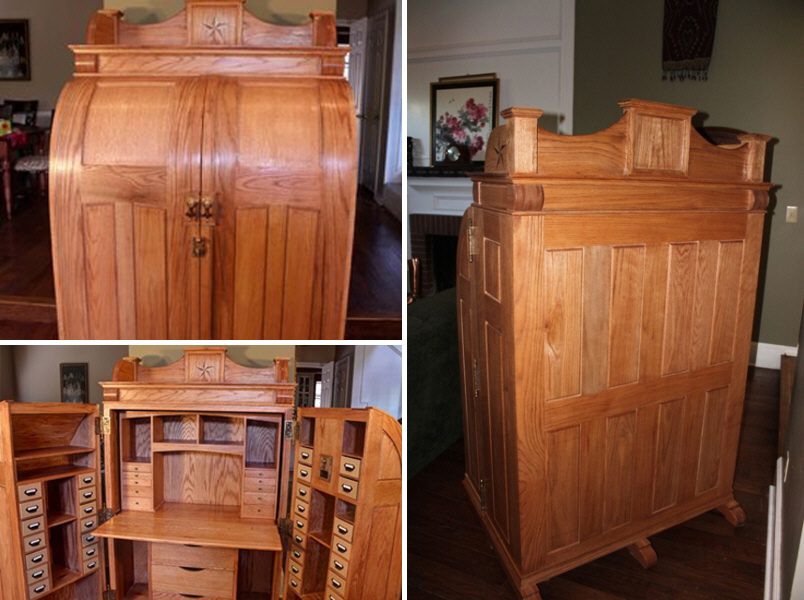 To give you a sense of the thing's scale, here's a couple photos of a Wooton desk with people in the frame: 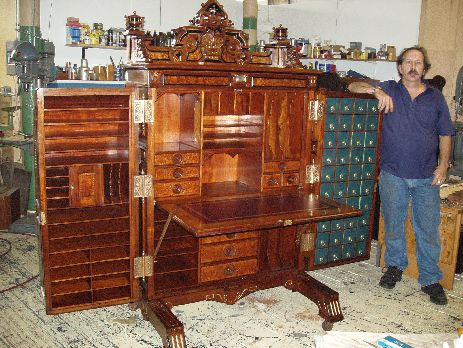 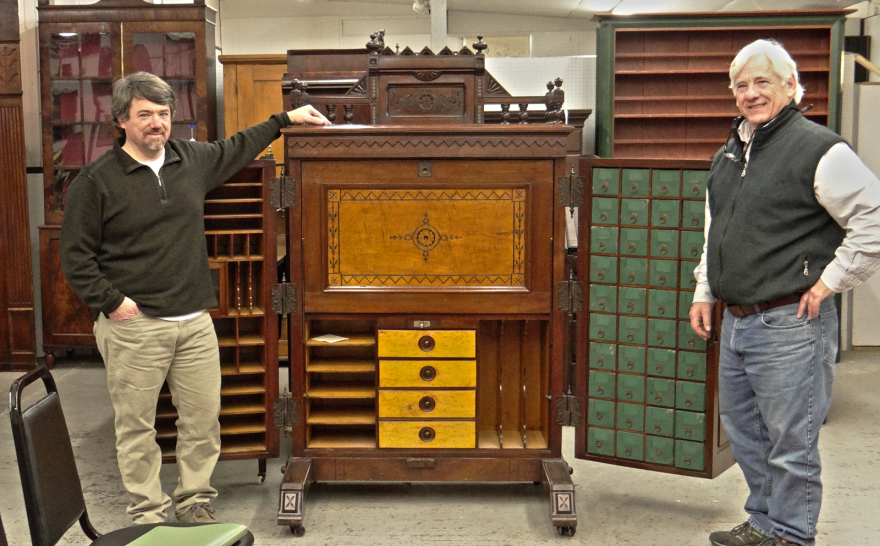 And here's a video of the desk in action, shot by Gannon's Antiques:

As far as how many man-hours one of these took to build, we can only guess; when Spencer Baird (Secretary of the Smithsonian Institution from 1878 to 1887) tried to order the desk with a custom compartment that could fit an oddly-sized paper type he favored, the company brushed him off, writing that "We should think the paper could be put in sideways & answer the same purpose." When Baird persisted, he got a second letter saying "Sorry we cannot accommodate you in this matter but we are so hurried in getting out our desks that we cannot at this time undertake any changes in interior arrangement of desks." (He eventually got what he wanted, though, and his desk is reportedly still in use at the Smithsonian.)

For those of you brave enough to attempt building one of these, within the issue of the Fine Woodworking magazine whose cover is shown above, they included a diagram showing all of the individual parts. While dimensions are only sparingly provided, it should give you an idea of the construction required: 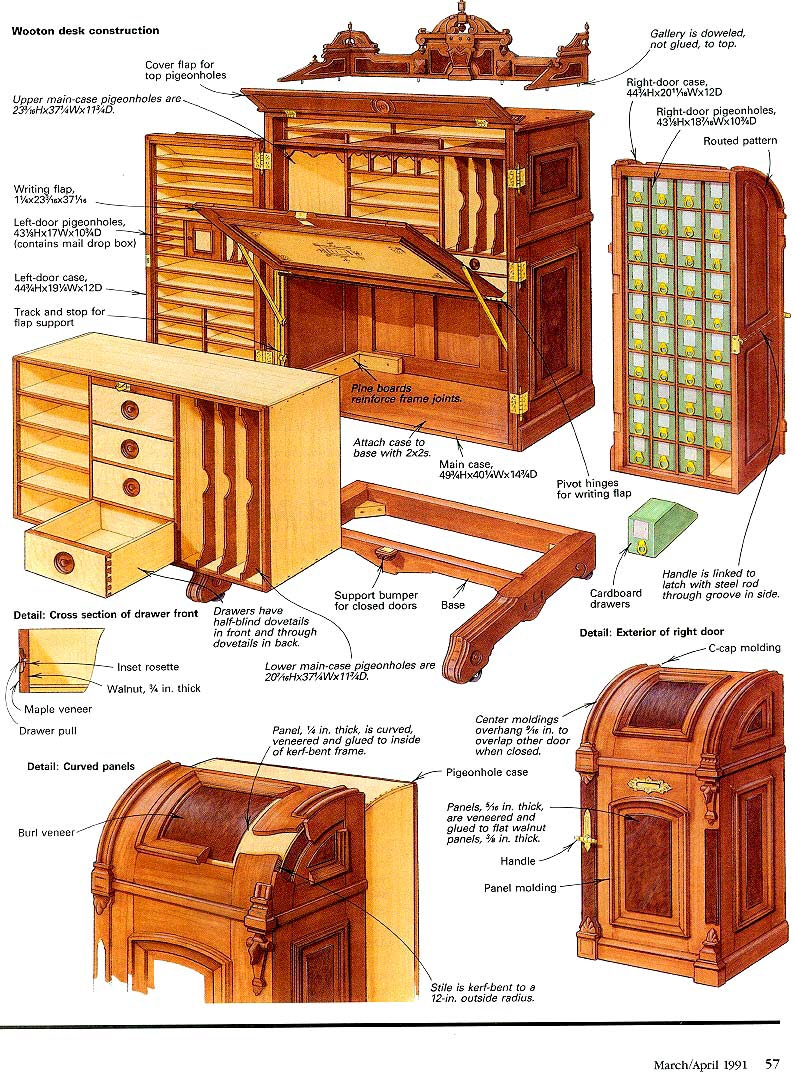