The Swiss type foundry Grilli Type likes to do as much as it can to bring its letterforms to life. “For us, it's always important to also create this visual world around our typefaces, to make them more than just those black-and-white shapes that we know nobody will ever care about as much as we do,” says Thierry Blancpain, who co-founded Grilli Type with Noël Leu in 2009. “So, during the process of designing a typeface, we are always trying to find images and archive material that speak to us.” Those found materials are then used to create posters, books or memorabilia—including, most recently, a charming replica of a Cold War–era toy.

The original toy was discovered during Grilli Type’s collaboration with the Swiss designers Reto Moser and Tobi Rechsteiner on GT Eesti, a new typeface with roots in 1940s Soviet Russia. Moser and Rechsteiner began working on the typeface after leafing through some Estonian children’s books given to them by a professor. In the books, they stumbled upon the geometric sans serif Zhurnalnaya Roublennaya, designed in 1947 by Anatoly Schukin and used by the Soviet Union during the Cold War. The designers immediately began scanning pages from the book and digitizing the type, laying the groundwork for what would become GT Eesti—and together with Grilli Type, the designers also began building out the world around the typeface, collecting images of other Estonian children’s books and toys of the time. 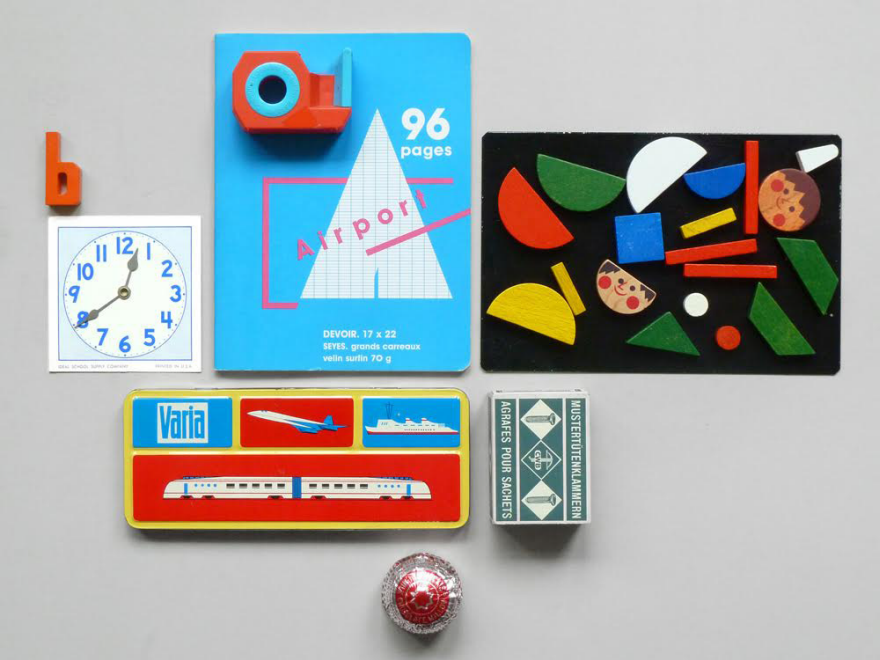 The photo that started it all; the original toy is in the upper right corner.

One of the images the team found was a photograph of a series of vintage toys laid out on a plain white surface. Among the assortment of toys was a set of geometric blocks with smiling faces, which struck the designers as being the same sentiment they wanted to convey through this typeface. “At some point, I made a joke that we could actually remake this toy and release it alongside the typeface,” Blancpain says. But what started as a joke began to seem like a worthwhile project, as Blancpain found himself itching to learn more about the toy and its history. “I thought it would be fun to make that world real again,” he says. “[The toy] was super-cute and spoke to us strongly, which is how we usually decide to do something.”

“At some point, I made a joke that we could actually remake this toy and release it alongside the typeface.”

Using Google’s reverse image search tool, Blancpain dropped in the image of the toys and found other similar versions, but none including the packaging or any other information to lead him to the original manufacturer. He scoured wooden-toy collecting forums for geometric-block aficionados, even shooting a few tweets out into the universe, but came back empty-handed. Finally, in his darkest hour, like any good citizen of the Internet, Blancpain turned to Reddit. “There was a subreddit called WhatIsThisThing and it just made sense to post it there,” Blancpain says. “And it took about three hours before someone came back with exactly what it was and the manufacturer.” 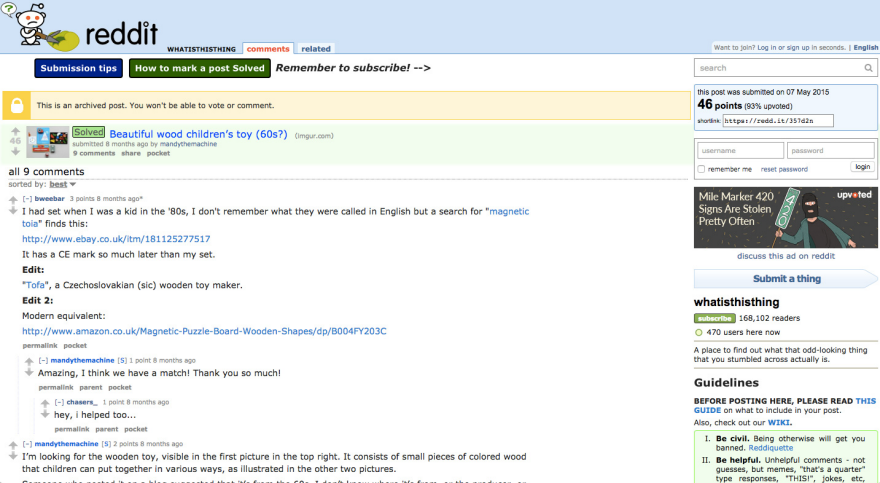 The manufacturer turned out to be TOFA, a national company in Czechoslovakia formed in the 1950s. (The name TOFA comes from the first letters of the English words TOys FActory. Although the company was based in Soviet-occupied Czechoslovakia, it also exported to the Western market, hence in the Western-influenced name.) Through TOFA, Blancpain was able to determine that the toy producer is still in business today, and reach out to get a quote for what it would take to make a modern interpretation of the discontinued toy.

At the same time, Blancpain reached out to a few friends at refurnished+, a Swiss company specializing in new products, furniture and home accessories. Blancpain shared his findings with refurnished+ co-founders Friedrich-Wilhelm Graf and Roland Jaggi, who agreed to work with Grilli Type to sketch up new versions of the vintage toy. “We’ve never seen the toy itself,” Blancpain says, “and it didn’t make much sense to us to try to recreate that directly.” Instead, the team came up with a half-centimeter grid, and Graf and Jaggi drew new shapes and faces inspired by the original toy that followed their own built-in logic, arriving at 18 different types of blocks, with the smallest pieces at ten millimeters (0.4 inches) in diameter. “I’ve never seen the actual toy set, so it’s hard to say how similar it ended up being [to the original],” Blancpain says. “From looking at the pictures, the original toy seems like it might have been much bigger, probably to make it playable by younger kids.” 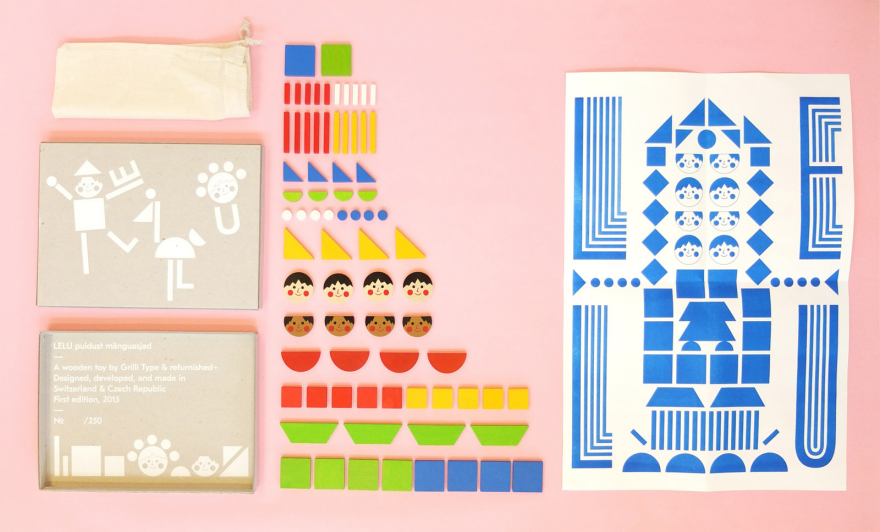 Each set of Lelu comes with 72 wooden pieces, a jute bag and a double-sided risograph-printed A3 poster.

Speaking with TOFA, the team discovered that the minimum number they could produce would be 250 sets, so they created 1,000 pieces of each of the 18 blocks; four of each block were then included in every set, for a total of 72 parts per set. They dubbed the final product Lelu, or “toy” in Estonian. Edges of the blocks were softened for safe play, and each set comes in a screenprinted cardboard box with a jute bag, for easy organizing.

“The packaging was actually designed this way because I went to speak to a friend, Tina Roth Eisenberg [aka swiss-miss], who gave me this tip for designing children’s toys,” Blancpain says. “She said that a toy box needs to be big enough so you can just shuffle everything in at the end. It can never be super-close to the size that you actually need, otherwise that box gets tossed.” So Blancpain and his collaborators made a huge box—but then, upon finding that Swiss shipping is “really expensive,” they trimmed it back to just under two centimeters in height, offering enough room for a child or parent to easily store the toys while still allowing the designers to ship the package as a letter instead of a more expensive parcel. 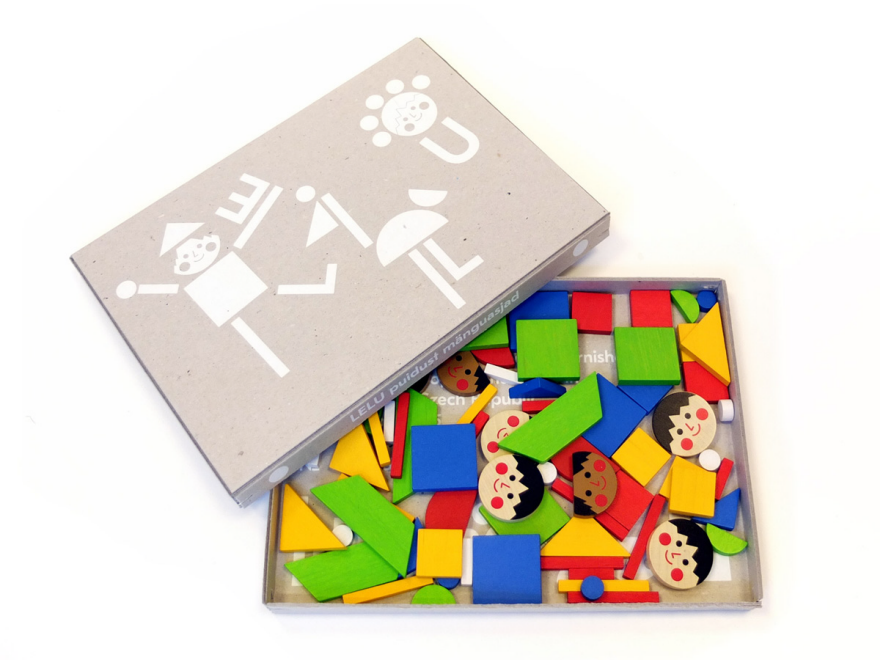 While Blancpain was excited to breathe life into the world of GT Eesti and into the old Estonian toy, he had another incentive as well. “At the end of the day, we just wanted to create enough to do a limited run to share with our friends and those who would really appreciate the story behind GT Eesti,” he says. “It’s definitely not a money maker for us. Secretly, being able to give it to my niece was sort of in the end why I did it.”