It's currently 21 degrees below freezing in Detroit and everyone would rather be driving a convertible along the coast of anywhere else, which means it's high season for the city's biggest annual event. If you've never been to an executive-level convention for an industry you aren't a part of, I recommend it. It's an excellent opportunity to recalibrate your ego and you're almost guaranteed to find fun snacks. The key is to pick an event that has a glut of passionate people willing to talk to you for no reason, and enough conglomerated capital to make weird and interesting things happen. So when Ford invited me to tour this year's North American International Auto Show, I considered exactly how little I know about the car industry, forgot to consider the forecast, and accepted. These are a few highlights from my first North American International Auto Show.

NAIAS is by most yardsticks a big deal and an enormous hoopla. In practice it's like a week-long new car scented office party crossed with an Olympic event or beauty pageant, if all the contestants were vehicles. It's all crammed into a massive convention center, crushed full with on-edge designers, caffeinated reps, unveiling ceremonies, media "personalities" and their camera crews, investors, trillions of glossy cars, and feverishly impassioned auto-people of all types.

This year the absurdity of it all greeted you right inside the foyer, where the Jalopnik dudes were living, working and sleeping in a couple of bro-ed out Ford vans. There was a lava lamp. There were a lot of harried laptopped laps. 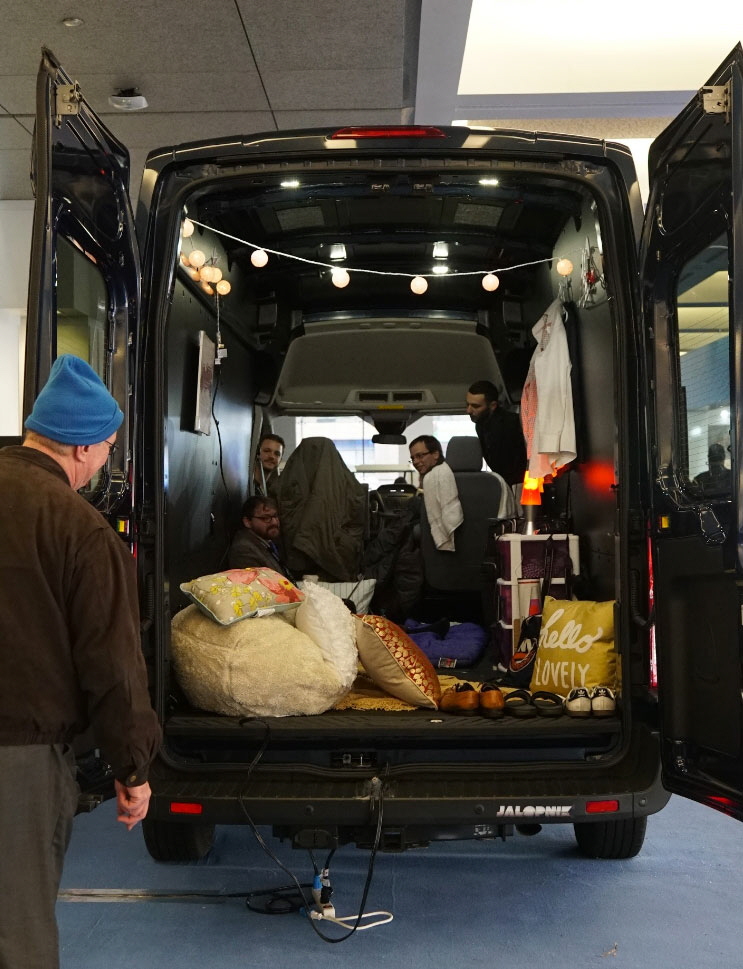 Living in vans indoors to cover the unveiling of new luxury cars. Nothing tone-deaf there. Photo via Jalopnik.

Inside, the show ranged from aggressively understated to just aggressive. Ford's bright blue and white circus featured a truck you could climb into and be carried 25 feet in the air, where you could then try your hand at a backing-a-truck-up simulator. Below, a set of moving basketball hoops taught a nice fun lesson on the dangers of drunk driving... while playing basketball? Relieved they're taking a serious stand on this. 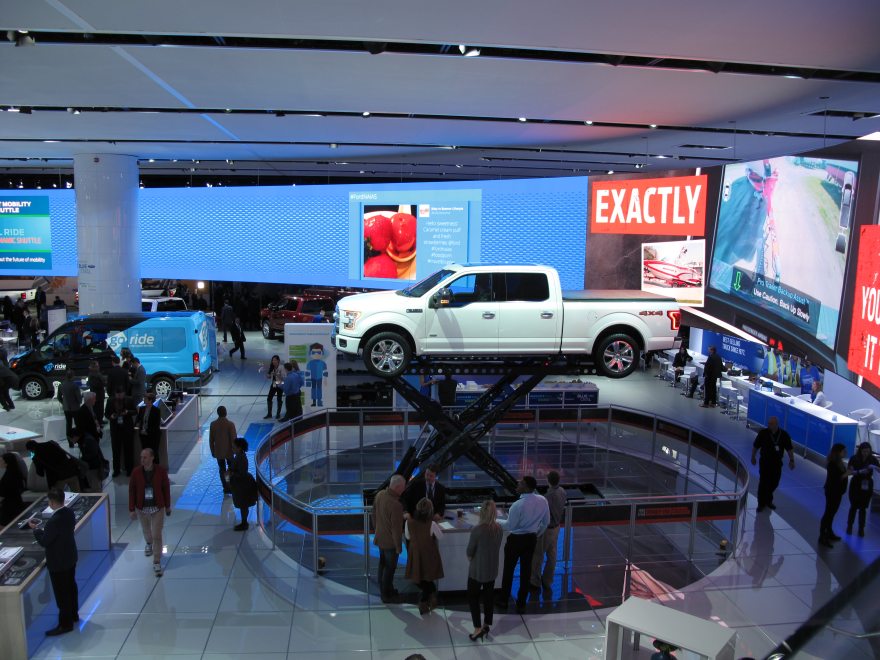 While some of the Ford area's elements felt silly (like the booth shooting a baseball-sized ice ball at sheets of Gorilla GlassTM every 15 minutes), rad engineering still filled all the corners.

According to most auto writers of note, Ford's insane GT supercar knocked the breath out of the whole show last year. While the shock has worn off, it was still easily one of the coolest things around, if not moreso now that it's ready for production. This year the brutal-looking thing arrived street legal, dressed in hard bright white and raw carbon fiber with a startling orange leather interior. 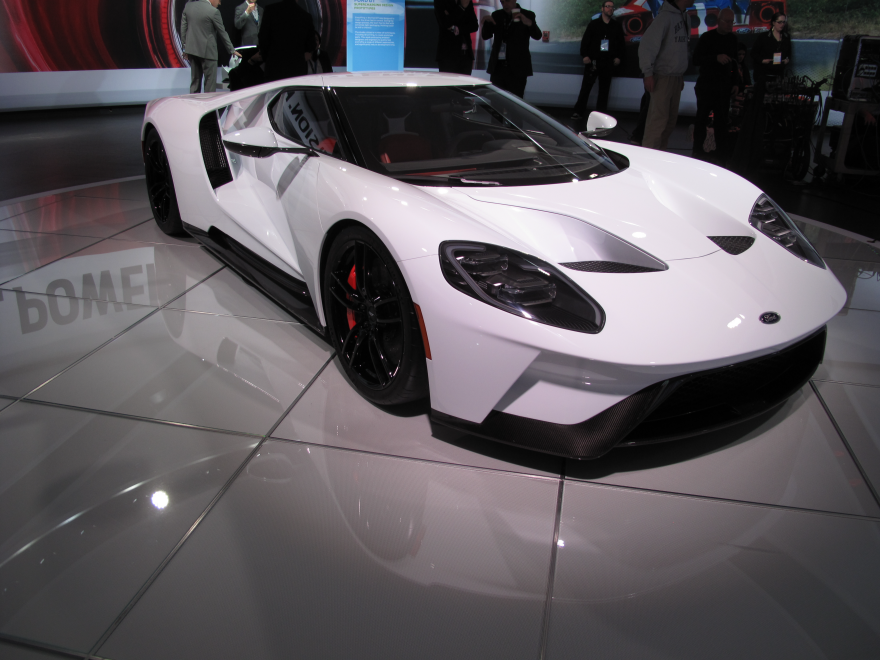 Chatting with Color and Materials Manager Barbara Whalen, I learned that the interior colors were inspired by NASA's distinctive lightweight jumpsuits. They worked with a real suit while developing the design, and even considered using the same material, though it didn't pan out. Barb recalled, "When you touch it, it kind of...crunches," which is a reasonable thing to steer away from in something as focused a Le Mans-bound vehicle, as much as I love the idea of seats made from space suit. 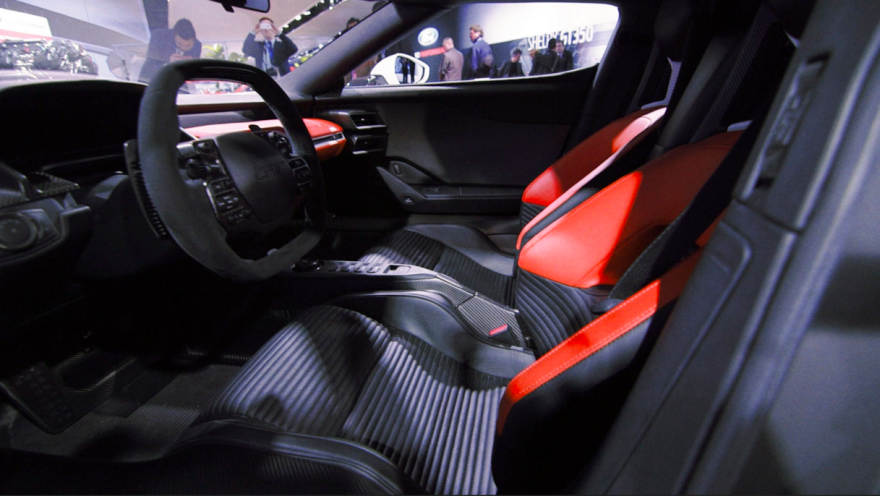 Pretty sure the grappling hooks are activated from the steering wheel controls. Photo via Bloomberg.

When asked about the GT's Stormtrooper-y design lineage, all designers interviewed maintained that the project bore no connection with the recently renewed franchise. Entirely likely, but Disney could do way worse for future First Order ground transportation.

Elsewhere in the show high points were less condensed. Unveilings promised "innovations," "disruptions," and odd combinations of user conveniences. The Kia Telluride teased a mysterious "health and wellness" interior. I'd hoped that meant next-level butt massage technology and an On-Board type link to WebMD so you could take your panicked self-diagnosis on the road, but no such luck. The most intriguing interior I found was in the Buick Avista concept. This thing's dash takes Buick's IntelliLink system and combines it with Tron styling with Star Trek data visualization. Along with a really slick exterior and launch pod-looking seats, it makes you feel a little like it should hover quietly when parked. 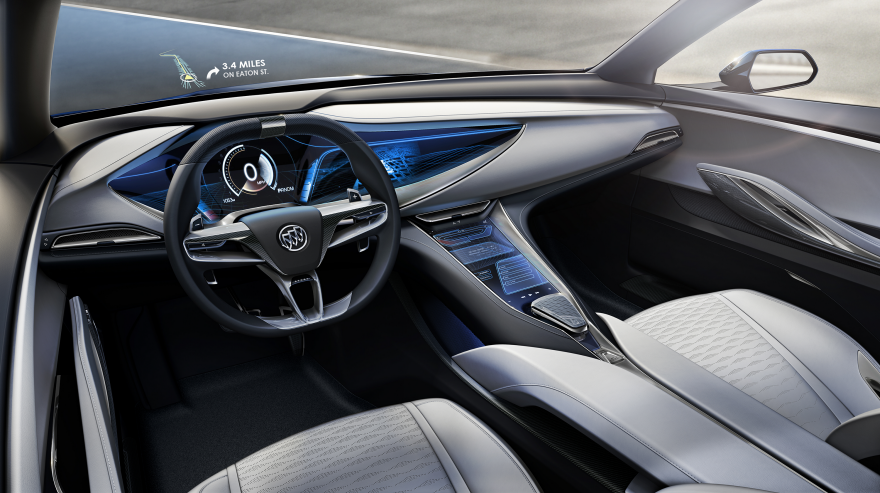 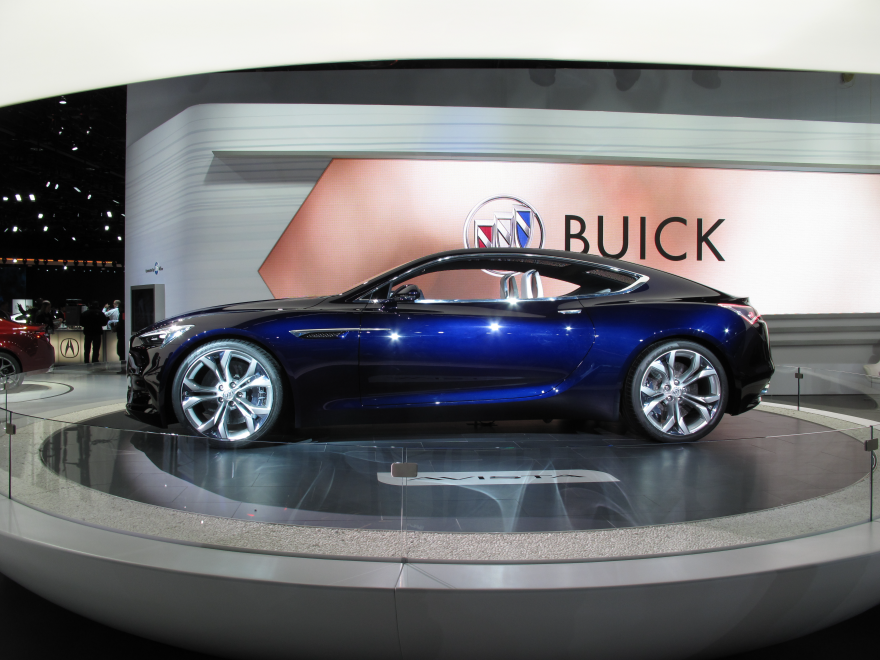 The best coffee at the show—a cortado—was made at the Volvo booth, which also featured bland animations of their extensive road hazard sensing systems. All of this surprised me but shouldn't have. If anybody knows about warm drinks and avoiding suicide by deer it's the Swedes. Hopefully having their S90 bring in the North American Truck/Utility of the Year trophy was sufficient appreciation for their efforts. 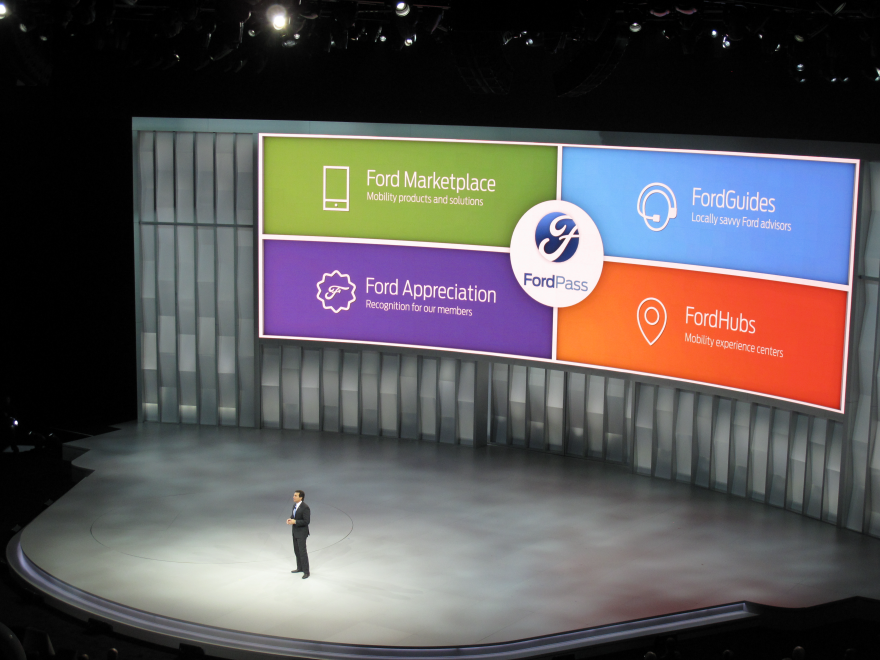 Ford's most interesting unveil was the announcement of the FordPass concept—a multi-platform program that could move the company into a supportive role for alternate modes of transportation. Identifying the changing transportation needs of urban populations, they're beginning to offer new options for joint ownership and leasing, ride-share programs, expanded rental options, and membership-based on-call assistance for directions, parking and more. So for us bike-riding, Uber-using, smart-phoning, non-car owners... the car giants know what we're up to and probably why. This is a big, interesting nod to the multifaceted future of transportation in the modern city.

Audi's H-Tron Quattro hydrogen/battery concept was one fun if fanciful gesture at future tech that hadn't already been well-covered at CES earlier this month. As much as everybody wants to talk about self-driving technologies, I'm pretty sure the hard facts of fuel efficiency and pollution are going to stay more immediately important for a good long while. This theoretical thing would theoretically roll 372.8 miles on a charge, and could be ready to produce within the next four years. 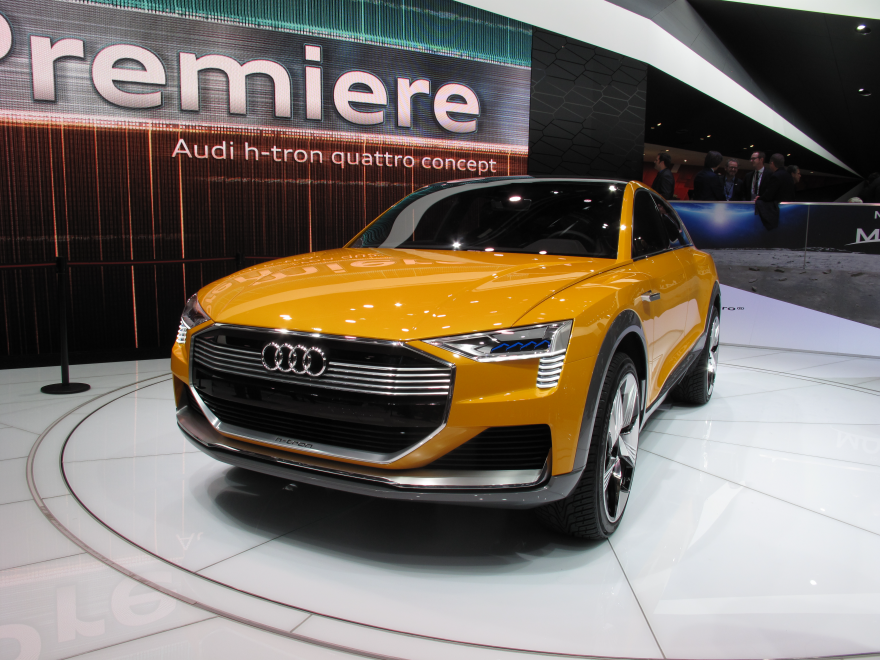 Overall, booth design at NAIAS is a big budget blend of tacky and impressive. Past the ubiquitous car-on-rotating-platform and an unimaginable amount of track lighting, designs were conservative, but a couple stuck out. The wrap around the VW setup was super clean, highly graphic, with nicely knolled bits and pieces. 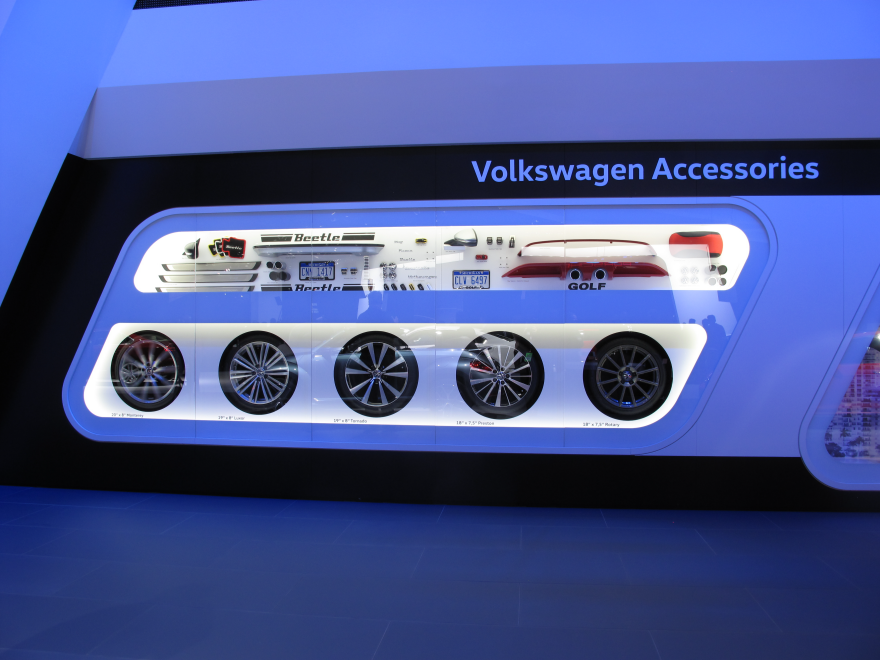 Booths like Michelin got adventurous and anti-gravity. A nice break from the overwhelming projection screens used in most of the vehicle displays. Having a mix of live and sculptural Michelin Men was also a good move. Everybody loves that guy. 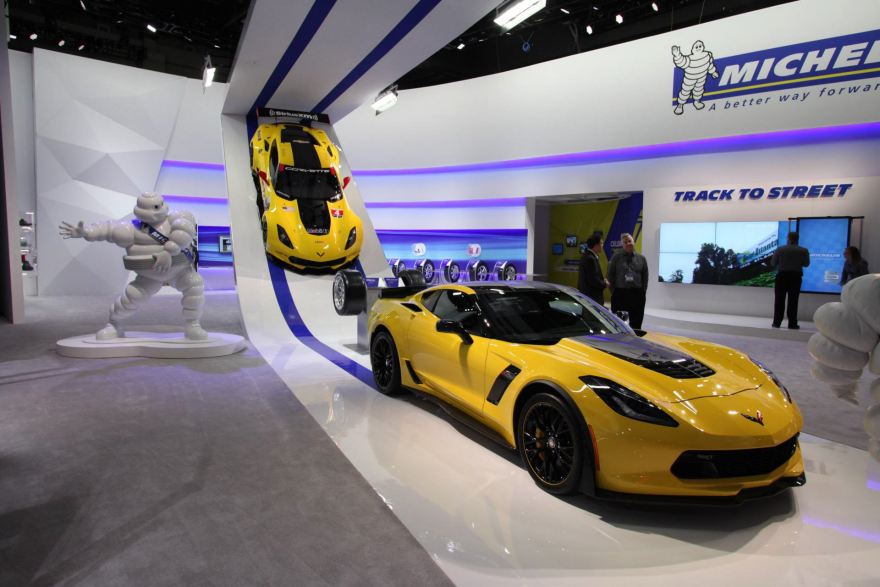 All in all NAIAS is an exciting event for both car buffs and anyone invested in commonplace applications of new tech. If you're interested in the future of both drivable environments and the things that drive in them, this show is a big look at the design thinking and companies shaping that future. Just don't go outside or your snot will freeze.

Ford Motors would like me to let you know that they paid for my NAIAS airfare, but not my salient and hard-hitting opinions of the show and their work. All opinions are mine and freely given, because anything else would be unethical and they probably couldn't afford to change them anyway.