Man Converts Van into Wood-Paneled Home for His Perpetual Roadtrip

"This was originally about traveling in a van, but now it is about living in something I built" 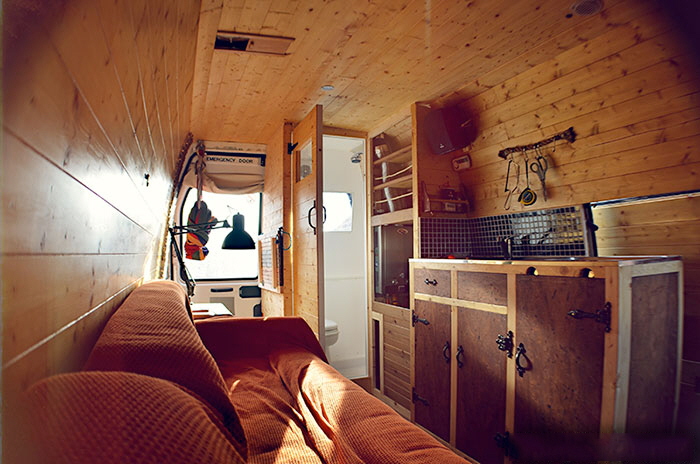 In 2013, Sheffield, UK-based Mike Hudson quit his job and started giving his possessions away. "I put things outside onto the street with notes saying 'free'. I gave away the sofas, the bed, chairs, and tables. I gave away my shirts, trousers and shoes to the charity shop on Ecclesall Road, sold my car and packed a bag to go back to my parents house to work on the van."

The van was a beater he'd purchased on eBay, using the money he earned working on an offshore oil rig on the North Sea. Here's what he did to it:

Hudson set off in 2014 for an epic roadtrip across Europe while living out of the van. How long do you think he'd last, six months, a year? As of January 2016, he's still at it and is now somewhere in Morocco, blogging all the while.

Speaking of blogging, he's extensively documented how he converted the van in the first place—and impressively, he designed most of it in his head and did it on the cheap: "No plans/layouts were drawn up or measured," Hudson writes. "Months of daydreaming allowed me to get a pretty clear image of how I wanted the van to be. It was pretty much built on-the-fly…. I used common materials found in DIY and home shops rather than using the specialized (and expensive) materials from motorhome/camper van shops." You can read all the details here.

Man Converts Van into Wood-Paneled Home for His Perpetual Roadtrip