A Lighting Solution for the Urban Nomad

When you think of problems plaguing the urban nomad, lackluster lighting might not be the first thing to come to mind. But for Matthew Lim it was a pain point in need of remedy.

“I was moving into a new apartment, when I realized I was missing a task light,” Lim says. And finding a suitable one proved more difficult that you might expect. “The problem with existing task lights is that they are usually point-sourced and one-directional—sharp shadows at weird angles—and they take up desk space,” Lim says. “Ceiling lights provide uniform, even lighting but they are usually in the center of the room, and don’t light up your desk well unless it is right in the middle. There was nothing in between.”

Tack is a lightweight, portable task light that attaches to the wall with 3M Command adhesive strips.

At the time, Lim was in his senior year studying industrial design at the Rhode Island School of Design (RISD), and was doing an independent-study project focused on bringing a product to a specific market. So the student set his sights on the lighting problem right in front of him, with a wall-mounted LED lamp he named Tack.

“Tack was based on a very simple, almost silly premise: What if there was a light that you could easily mount on the wall?” Lim says. And he meant really easily—no mounting hardware to mess up the wall or anger the landlord (more on that in a minute). To test his premise, Lim went straight into prototyping. “The very first step I took was to create a proof-of-concept model of the idea,” he says. “I headed to the shop, quickly bent some sheet aluminum, threw in some LEDs and slotted in a polycarbonate diffuser lens, all of which were excess materials from previous projects.” This first prototype was met with a mostly positive response from friends and family, which spurred Lim toward making the concept a reality. 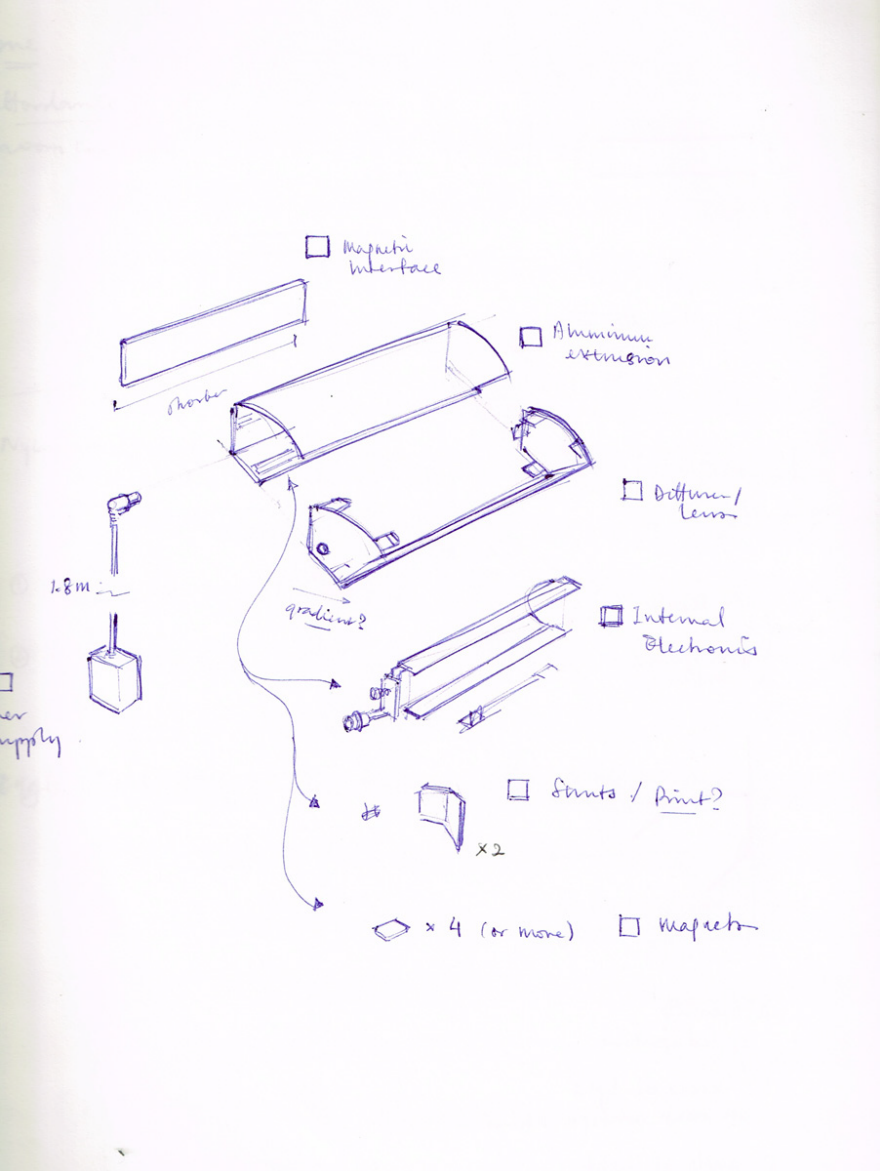 Next, Lim tapped into the expertise of local manufacturing partners to determine the best way to bring his rough prototype to mass production. Through these talks, he decided to produce Tack in aluminum, both for its ability to quickly disperse heat and its favorable strength-to-weight ratio. “Since the light will be mounted on the wall, it needed to be sufficiently light to prevent weight from being an issue,” he says. Bent sheet aluminum was ruled out due to labor costs, leading Lim to settle on aluminum extrusions, which turned out to be a good fit in terms of production quantity and tooling costs. One of Lim’s professors suggested that he check out Silver City Aluminum, based in Taunton, Massachusetts, a quick drive away from RISD’s campus. The final extrusion is cut to the correct lengths by Silver City and then sent to a metal finishing facility to be anodized.

Talking to manufacturers also gave Lim a new set of constraints. By narrowing down the processes that would be used to create his design, Lim was able to determine the tooling and production costs, as well as the minimum order quantity needed to not break the bank. Conversations with Silver City Aluminum quickly revealed that to create Tack cost-effectively, Lim would have to bump up the minimum order from 500 to 1,000 pieces. “That meant that the product had to be relevant and useful to twice as many people,” Lim says.

From first to last prototype in six seconds

Those limitations led the designer to Kickstarter, where he could place the fate of Tack in the hands of potential customers from around the globe. “I’ve always been interested in crowdfunded platforms as a way to democratically validate a design, and that became an important guiding constraint in the design of Tack,” Lim says. “I’ve been following Kickstarter for a while, and it seems to me that getting at least 500 backers is feasible.”

As for his initial premise for the product—that Tack be easily mounted and removed from any location—that proved easier said than done. Lim decided to use 3M Command adhesive strips for their ubiquity and promise of easy removability. “I once mounted one of my prototypes wrongly on the wall and ended up ripping out an entire chunk of wallpaper,” he says. “And, no, I haven’t told my landlord about that yet.” In one of his earlier prototypes, Lim designed a facet that hid the adhesive strip and yet made it accessible for removal. “At the same time, the facets opened up possibilities for mounting Tack in different positions to achieve different lighting conditions,” Lim says. “I prototyped many different versions that afforded the same functionality, from ones that were angular to more curved ones.”

Multiple iterations of facets led Lim to settle on two flat edges and one curve for Tack. This final profile also allowed the power supply plug to always remain close to the wall no matter which position the user chooses. “With each iteration, I was making sure that the amount of light coming out of Tack is optimal while maintaining a petite and pleasing profile,” Lim says.

The Kickstarter video for Tack

There was also the issue of the lens and how it would it be attached to the aluminum body. Lim started with polypropylene but later switched to high-density polyethylene (HDPE), which is more recyclable and was available in the correct finish, color and thickness. Natural uncolored HDPE comes with a frosted, translucent white appearance, which helped to diffuse the LEDs evenly. Finding a suitable supplier was another challenge given that Lim needed the HDPE in an unusual thickness, but after many e-mails he was introduced to Formflex, a die-cutter manufacturer based in Indiana.

The HDPE diffuser lens and magnetic mounting strip both use a similar die-cutting process. The magnetic mounting strip is made from a huge coil of mild steel and die-cut to the right length and profile. The electronics and the power supply are sourced from Shenzhen, China. “It is very difficult to find local manufacturers who produce electronics cost-effectively, especially at such a relatively small scale,” Lim says. 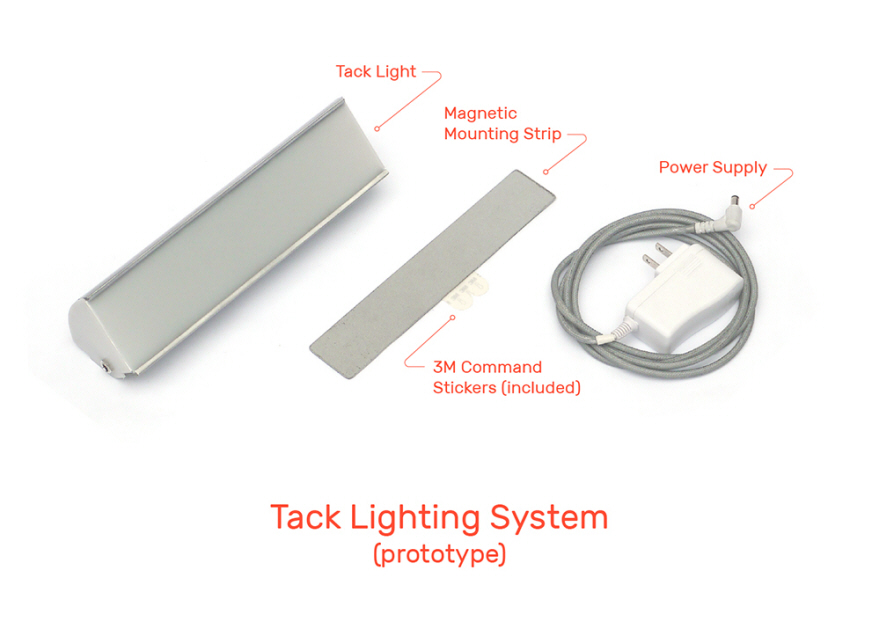 Above and below: the components, material specs and measurements for Lim’s Tack Lighting System 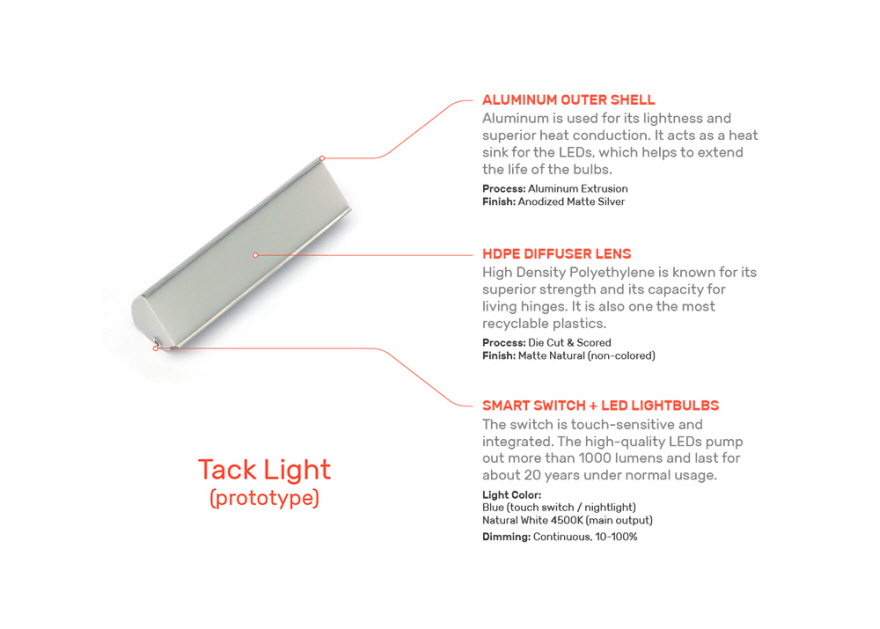 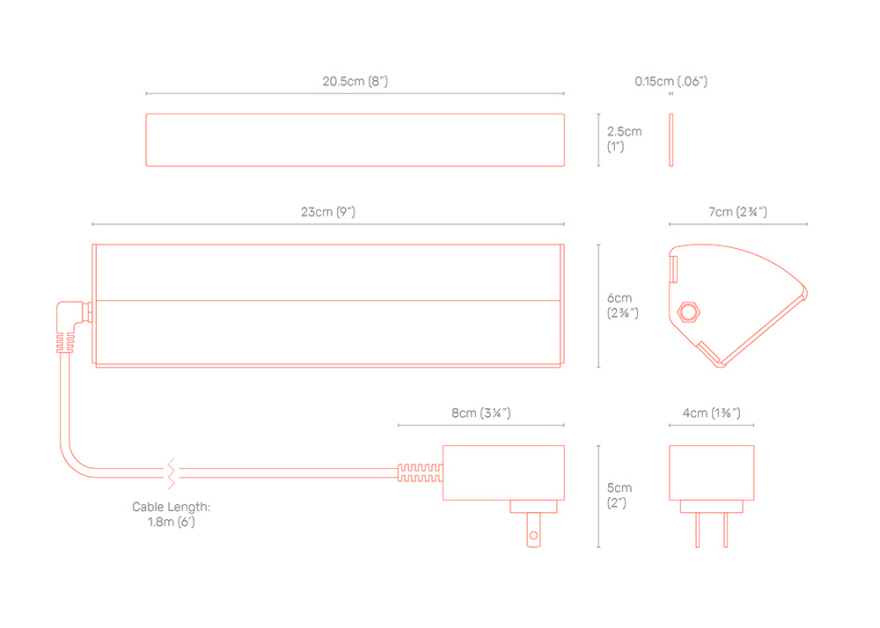 Lim also struggled with pricing the product, a skill set that, unfortunately, isn’t always included in the design-school curriculum. “[There were] a lot of spreadsheets to make sure that the numbers work out,” Lim says. “This involved knowing beforehand every single cost that will be incurred: the cost of import freight of the parts from China, the cost of shipping to backers, et cetera. Everything has to be considered.” After asking multiple people about the perceived value of Tack and balancing that with the all of the costs, Lim decided on $60 for one Tack Lighting System in matte silver. (Lim will do one color, matte silver, if he raises $60,000. If he can raise substantially more funds, he will add gold and rose gold finishes; backers can get one set in any available color for $70.) “I have been joking with friends that at the minimum funding goal of $60,000, I will not be earning a living wage,” Lim says. “Unfortunately, that is the truth. However, I view the entire experience as a learning process and I think it is worth all the time and effort that I’ve put into it.”

As for what he’ll do if the project doesn’t succeed? “I think failures teach you a lot more than successes. . . . If Tack doesn’t work out in the end, I will find something else that perks my curiosity and explore it. I know that no matter what happens, I will come out of this experience more knowledgeable and better equipped, which would in turn increase the likelihood of success for my next endeavor. The most important thing is to keep learning and never stop trying.”

A Lighting Solution for the Urban Nomad