Governments Warming up to Discursive Design?

Selling out, vacuous appropriation, or the natural course of things?

Who'd have thought that the once strange and marginalized form of design practice–discursive design–would be promoted and even employed by national governments? What a difference a few decades can make.

A few months ago on the unofficial "Back to the Future Day," (October 21st) the White House blog gave props to design fiction practitioners for their ability to "spark richer conversations" about important topics such as self-driving cars and desirable transportation futures.

Additionally, it expressed that American ingenuity and such creative talent could help describe a future in which, as President Obama put it, we go to space "not just to visit but to stay."

One reason for our excitement is that many of the innovations that we take for granted – such as smart phones and global communications satellite – were inspired by science fiction. A number of the technologies portrayed in Back to the Future are either here today (flat panel displays, video chats, gesture-based computing) or under development (flying cars, hoverboards). Many technologies and ideas that seem like science fiction today – such as Harry Potter's cloak of invisibility, an Iron Man suit, or Andy Weir's story about astronauts on Mars – are being actively explored by scientists and engineers. 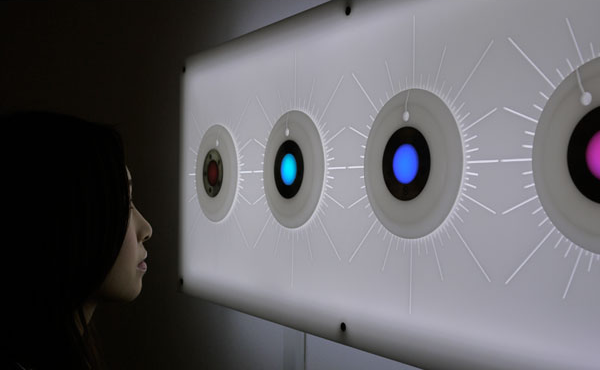 Happylife is a project by James Auger and Jimmy Loizeau that appropriates the government's "real-time dynamic passive profiling techniques for detecting malicious intent in areas of border control and national security." It speculates on how personal emotional data might be used within the home and affect family life: "What would it mean for an electronic device to know more about your partner's emotional state than you do? Or be capable of predicting a future bout of misery through statistical analysis of accumulated data? When does technology become too invasive?"

Design fiction is a species of discursive design that deals with visioning and prototyping possible futures as a means of eliciting debate and uncovering often-competing values. As a tool it can be used to challenge political frames, and in this case the US government is acknowledging what discursive design can do for them. But it cuts both ways, of course.

So, rather than an inherently biased form of design that necessarily challenges big business, or big government, or big culture, we see it as an agnostic technique for communication—and potentially big communication when governments get involved.

As an alternative to burying 70,000 tons of nuclear waste at the remote Yucca Mountain facility in Nevada, Mike and Maaike propose the 24110 Plutonium Memorial (the half-life of plutonium is 24,110 years). To be conspicuously located in Washington D.C. and formally evoking the idea of sweeping issues under the rug, it is intended to "make a strong statement about the shortsightedness of our society and our world's policy makers." mikeandmaaike.com

Recently the UK government bested the US by actually putting money where their discursive mouth is. Its Arts and Humanities Research Council funded the ProtoPublics project, which ultimately aims to get researchers and the community together to craft "new services, experiences, projects and policies that address contemporary issues." In support of this objective a sub-project, ProtoPolicy was organized to investigate how design fiction "could be used to help politicians and community groups imagine the future implications of policy initiatives in creative ways." This past summer they looked specifically at the issues of aging in place, loneliness, and isolation with the help of discursive practices. Their 38-page report, Using Design Fiction to Negotiate Political Questions discusses their process and findings. For example:

Design fictions appear to be more readily adopted by the civil service rather than politicians because of the shorter timescales usually adopted to take political decisions. However, through additional advocacy and research, the ProtoPolicy team seek to demonstrate that design methods, particularly design fictions, could contribute to a shorter decision-making cycles through rapid problem definition, co-developing solutions with citizens, rapid prototyping and refining concepts before full-scale deployment.

Soulaje is a design fiction prototype created by the ProtoPolicy team in collaboration with their older people co-designer group regarding an aging population's needs for self-control and living with dignity.

All this might be somewhat disturbing  for those that imagine discursive design (and its many various species like speculative design and design fiction) to have a particular bent—a more adversarial and provocative role in challenging the status quo, the state, and powerful institutions. Perhaps more so than a "selling out", this is mainstream appropriation, which evidences its utility. Indeed in relatively free and liberal societies where sharing of information goes both ways, this should be expected. Ultimately it can lead to the advancement of the discipline—this is how knowledge and practice develop, with both pros and cons.

We want designers to be well versed in pluralist notions of their fields–manifold applications and outcomes. Certainly guns (3D printed or otherwise) can be used for self-defense or aggression. It is a big world and we can expect that, or at least not be surprised if, effective tools are used by anyone. They are not only for certain notions of patriotism, righteousness, or the truth; obviously, these are relative conceptions that we hope continue to be contested and debated. As such, a broad conception of discursive design can allow for fuller and continual negotiation about how best to live our lives.

Please keep the conversation going by commenting on this post, or by submitting your discursive work to us for possible publication.

Governments Warming up to Discursive Design?