Bradley Bowers on the genesis of his Pinch cup and saucer

No matter where you’re from, it’s likely that your culture has a specific ritual around drinking. In Bahrain, it’s customary to drink hot tea from glass cups—and for the Miami-based designer Bradley Bowers, witnessing this simple ritual on a Persian Gulf trip sparked an idea for a set of drinkware that celebrates the universal gestures of drinking.

Featuring a simple “pinched” cup and a saucer with a slightly lifted edge, Bowers’s new Pinch espresso set is meant to draw attention to the way you handle the vessels you drink from, and to encourage a thoughtful meditation on that process. The inspiration for the form came on that same trip to Bahrain, while exploring an anthropological museum. There, he stumbled upon a set of ancient oil lamps made of clay. “They were simple and beautiful,” Bowers says. “I knew I wanted to create something that had the same power as those oil lamps from so long ago. They looked at once contemporary and ancient. My goal was to make a gesture and process tangible and eternal.” 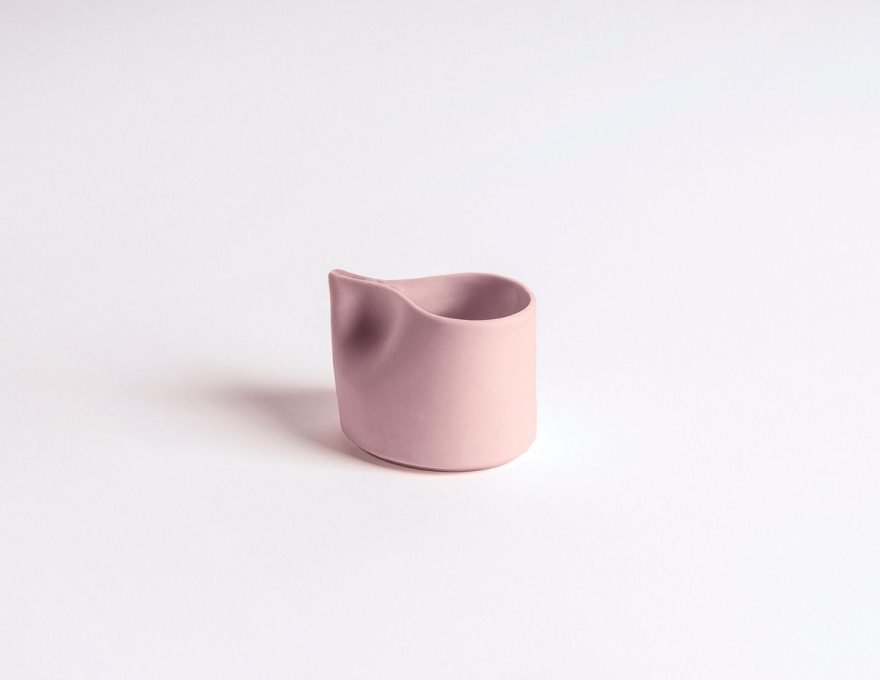 The Pinch cup (above) and saucer (below) 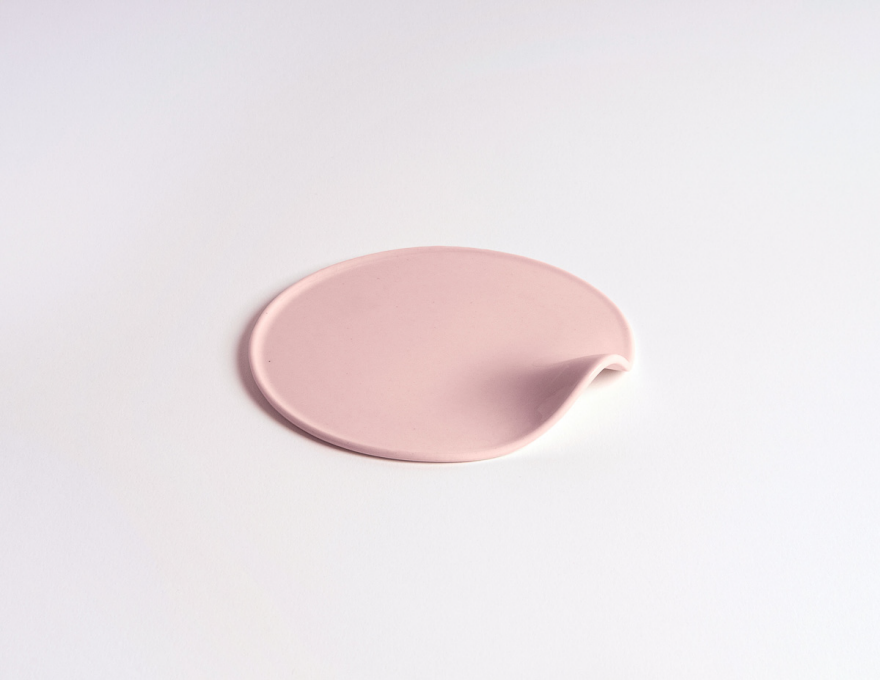 After a few initial sketches, Bowers moved to crude clay models. “There weren?t many sketches, to be honest,” he says. “Since I was chasing a gesture, two-dimensional lines on a page weren’t adequate. I had to feel what I was doing.” After some experiments in clay, he moved to the computer. “We 3D-printed numerous CAD models, and I lived with them—actually drinking from them, cleaning them, dropping them, essentially trying to find their flaws.”

As many a designer before Bowers has learned, perfecting a simple object is one of the most vexing challenges. “To get the pinch just right so that anyone would be able to comfortably hold and lift a full cup of hot espresso or tea was a challenge,” Bowers says. “We went through over two years of clay mock-ups, 3D prints and materials samples, changing a millimeter here, removing material there, until finally balance was achieved.” 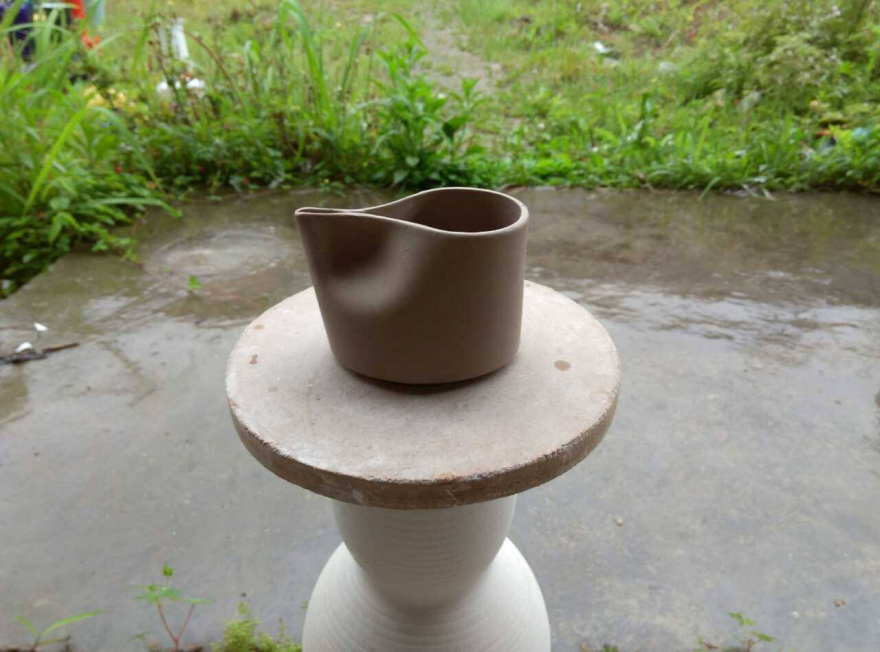 In fact, Bowers didn’t even really begin work on the saucer until two years into the design process. “This was due, mostly, to my obsession over details,” Bowers says. “I wanted to make sure that the cup, the centerpiece, was perfectly resolved before creating its counterpart.” Because the final drinkware pieces would be cast in porcelain, a material chosen for its strength and lightness, the pieces would also shrink in the kiln and couldn’t be judged for scale until they were completely fired. “We had a graveyard of mock-ups,” Bowers says. 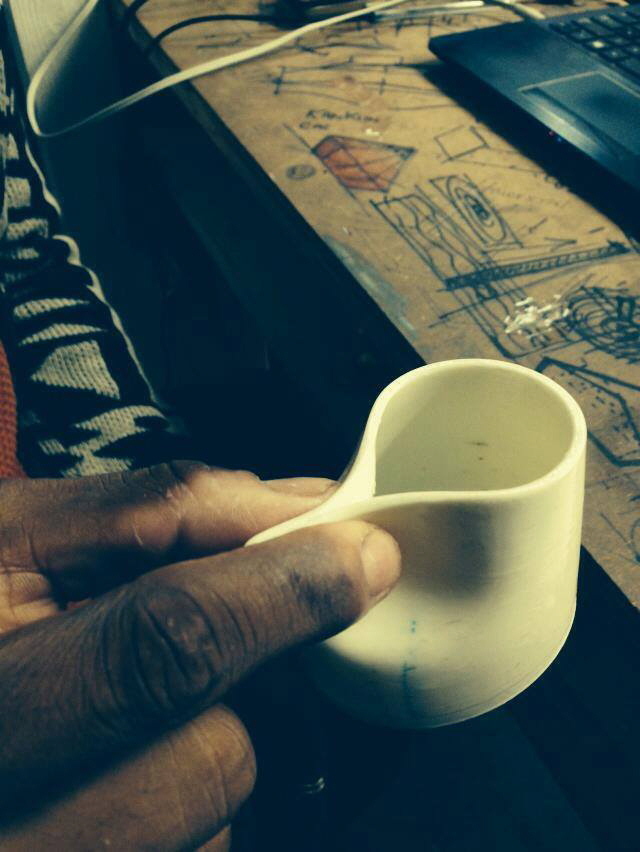 After establishing a form language for both pieces—the aforementioned pinched cup and lifted saucer—Bowers worked with the team at the Washington, D.C.–based Middle Kingdom Porcelain to perfect a recipe for a porcelain slip that would highlight the forms and curves of the set. “The recipe for the porcelain came by way of a museum curator I know in Miami,” Bowers says. “I told him I was on a quest to make a porcelain cup that has sexy curves and shadows. He knew a company that made objects in matte porcelain. He put me in touch with them and the second journey began.”

Color was the next consideration, as Bowers scoured Pantone chips to find the ideal hue. “The world has enough ordinary white cups, and Pinch is no ordinary cup, so it couldn’t be an ordinary color,” Bowers says. After about four rounds of testing a variety of colors, Bowers and the team settled on a matte rose tone for the porcelain. 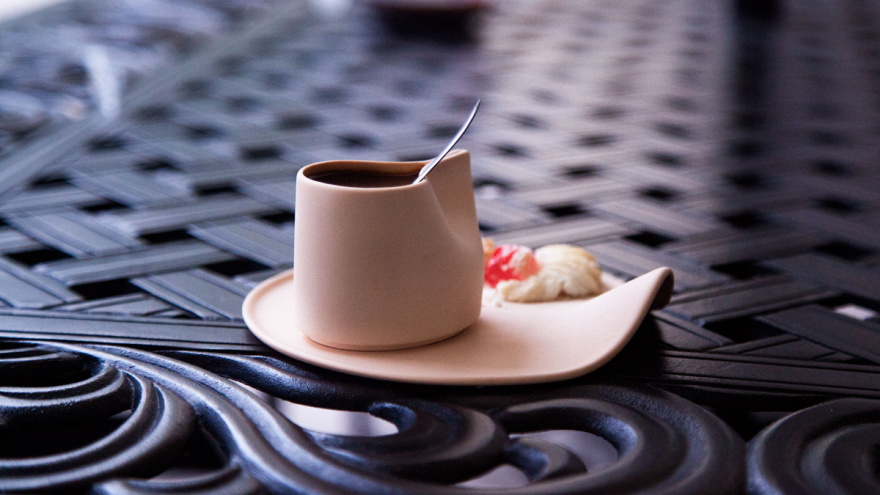 Since the porcelain is a solid color—as opposed to just an external glaze or finish—that added another layer of complexity to production. Each cup is slip cast, a task that varies in difficulty depending on weather conditions like humidity and temperature. For each batch of Pinch cups and saucers, porcelain is mixed and then samples of it are fired in a kiln to ensure that they will produce the intended hue. “This is mostly trial and error, since the same recipe on a different day can yield a different hue than before,” Bowers says. After the color is confirmed, the molds are prepared and a porcelain slip is cast to create the pieces, which are set aside to air-dry. After that, they are cleaned and rubbed down by hand to remove any bumps or nicks. Then they’re ready for the preliminary firing, which sets the color of the pieces, and a second firing for the glaze. And then they’re done. The pieces are sent to Bowers’s studio, where they’re packaged as a set, wrapped and shipped to customers. From start to finish, each piece takes a little over a week to make.

“The biggest challenge along the way is waiting,” Bowers says. “I want things to be immediate, because I see it in my head as it should be, but turning a thought into a reality isn’t as fast as people may think. It is well worth the wait.” Pinch is sold as a single or double set via Bowers’s site, starting at $85.