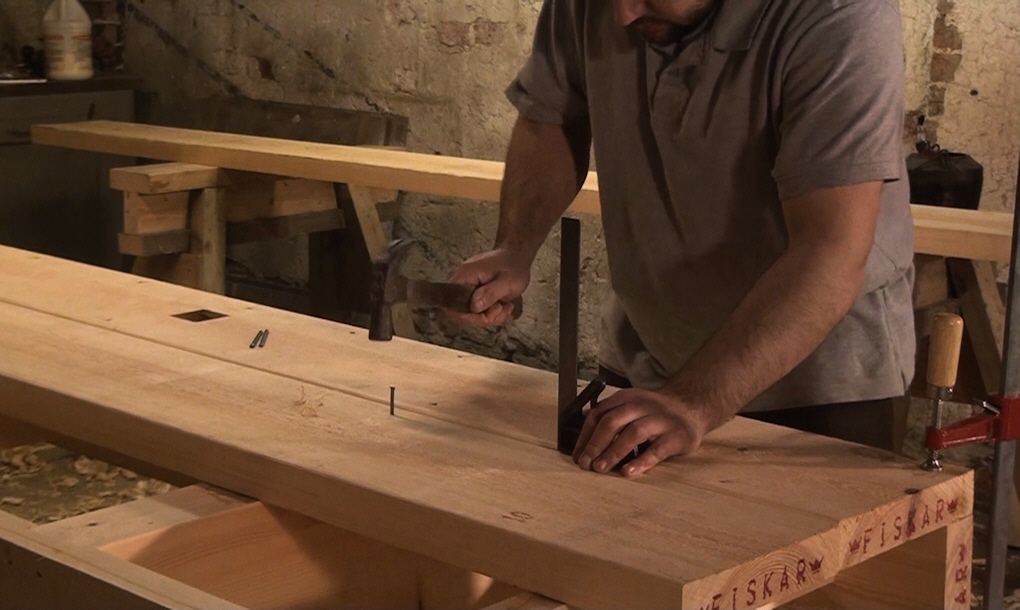 Given current trends in woodworking, every single solid-wood workbench I've seen features a top consisting of boards glued face-to-face, with the side grain pointing up. (See: Jay Bates' workbench build in our Weekly Maker's Roundup.) This is believed to be a French convention, and the design relies on mass for stability. It also requires a lot of wood.

The traditional English workbench, in contrast, is far more parsimonious in its use of materials. With the English style the stability comes from engineering rather than mass, with massive stretchers but a relatively lightweight top. In the video below Richard Maguire, a/k/a The English Woodworker, shows you his simple plank-top design:

What surprised me, and what is not obvious from viewing the video, is that the top uses no glue at all and is instead affixed by nails. Writes Maguire,

…The boards which make the top are all independent of each other. They're not glued together, but instead laid on to the frame of the bench and fixed down with a gap between each of the boards.

How do we do it? Nail it down. Straight through the top.

Reason one – timber movement.
Nails will flex and bend allowing the boards to expand and contract in to those gaps we've left. Screws are hard and brittle so require elongated holes to achieve the same, but we want our boards fixed down here.

Reason two – consider your plane irons. Nailing through the top might sound strange, but I'd rather see the enemy and be able to punch it down than screw from underneath and encounter a stealth demon later on. Remember the top's quite thin.

The idea makes me a bit queasy, as klutz that I am, I'm certain I'd eventually run a plane iron over a nailhead while reflattening. However, I don't have anything like Maguire's experience, so I have to assume there are benefits to the design. Speaking of which:

Why a planked top? We've already explained that it's simple, but thin softwood tops can be one of the big turn offs for the English style bench. In 10 – 15 years of hard use and regular flattening you might not actually have much top left.

With a planked top the solution is easy as you can simply rip off an individual board and replace it quickly and cheaply. I still don't belive that the majority of benches built will ever require the top replacing, but it's good peace of mind for the over thinkers. Also having this in mind will allow you to use your bench top in ways that you would never dream to do with a fully fledged hardwood top.

So, makers: What say you? I can't deny that the design makes far more economical use of materials than what I've seen, but I'm curious to hear what you all think of the pluses and minuses.

Lastly, Maguire's video above is a promo for an online course he's running, where he will show you how to make the bench in a five-hour, eight-chapter format complete with PDF plans. The price of entry is £26.00 (USD ~$40), a steal when you consider the price of a traditional brick-and-mortar woodworking class. We're curious: How many of you would pay for detailed, project-based online instruction? It does seem to be the way things are going these days.