Notes from Bruce Sterling at CCA 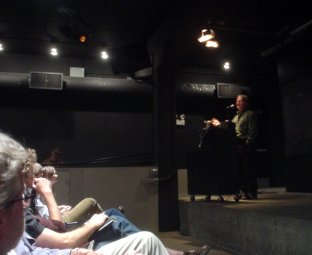 Design Futurism at CCA. Sterling writes his talks like an author, crafting his phrases with care, and so my hamfisted notes (after the jump) are a best attempt to capture just some of what went on. Some of the talk came from Shaping Things, but much of it was fresh (or sourced from other things he's written).

Other anecdotes from from the event are here.Design and Futurism are not the same thing - design is a method of action and futurism is a method of vision. Design lately has been moving away from objects and messages into processes and services and experiences Futurism is becoming a popular sport - trend spotting, where weak signals are one mouse click away

Commonalities between Design and Futurism They have clients (where as an author he has an audience) Practical-minded people tend to make the same arguments against both - "What good are they? I know what I'm making; I know what I'm doing. I'll have my nephew design it. What are these strangers and dilettantes doing telling me what is going to happen?"

Change: everything is changing all the time - so yes, these people can tell you something

How does an object come into the world and how does it go out of the world (in other words, the adoption curve, or the lifecycle) 1. The question mark - getting through this sucks up money, greatest risk in the trough before rising star and this is where designers and futurists cluster 2. The rising star - makes money 3. The cash cow - makes money 4. The dead dog

[Sterling said a great deal about each stage]

Hype is the basic jobs of futurists; picking the stars from the question marks.

Those companies who are really anxious about their future commonly don't have any future.

Futurist activity of "scanning" - newspapers Internet, television, conferences, other futurists, landmark events, reports, weak signals. Always asking "What are the things out there that might affect clientele (which could be anything!)?"

Futurists create scenarios (aka alternative futures). This is useful to designers. It's not about the absolute future, but the client's future - a much much narrower topic. Like with design, you don't have to create the cosmos to create a chair, let alone create all possible chairs. The client's anxieties are the grain for the futurist and drive to create (i.e., describe) a future that the client could actually understand

Futurism has lost of theatrical features (even corny) but these scenarios can be sprightly and vivifying when they engage people and their untapped capacities for change and growth.

Tools: brainstorming, free associating, psychiatric style listening, the goal being to elicit that interior knowledge; the repressed things that they can't otherwise say aloud. Other tools: tour the plant; go on an offsite adventure, anything to break the mindset.

Brainstorming is about producing 100 ideas, and you need 97 bad ideas to get the 3.

You're waiting for the insight to the core, the hidden, the anxieties, he fear, the greed - it's like dream interpretation - eliciting knowledge that is already there.

He described a model called The Quadrant 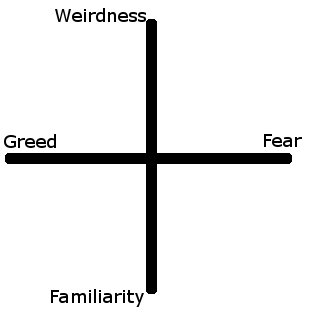 [I don't have this exactly right, since I'm not 100% sure which label goes in which quadrant]

The work is to build teams and help them take ownership of these quadrants; these different visions. To look for signifiers and harbingers, i.e., what would be in the NYT if this was coming to pass?

What can we do to hit all four worlds? Converge on the brown one-size-fits-all-center - but that's not where big success lies. It lies in the Most Advanced Yet Acceptable, as Loewy says.

If you liked design and futurism and combined them - what would come out of that blender?

Few people well known for futurism, and they are not exactly household names. It's an old fashioned idea, not having a lot of impact. If you are a young designer today, futurist must sound musty. Even the word modern isn't modern any more, what with mid-century modern, retro-modern. Even post-modernity is from the 80s.

The heyday of futurism was the 60s, and now is on the decline. Compare with design in the 30s and 50s and how much more optimistic it was. Only Massive Change resembles those earlier days.

This focus on making stuff (processes services, etc.) might not last. Civilization can collapse if it can't get its material stuff together. There are historical examples. Avoiding collapse means achieving quote sustainability unquote, and this is the key overlap between futurism and design

We are dealing with the long-term consequences of our successes. The systems are stressed enough that they will fall down.

Sustainability is tedious and hectoring and dumb; a mindful moral struggle to bequeath a future to our descendants but it has never felt futuristic. Proponents are alarms and scolds - incoherent and mystical and wooly - like they gave up all sense of taste to live on their last resorts.

So, how to make modernity and sustainability mean the same thing? Designers have a major role here. Thinking and acting and declaring green has been a grim business, smells of sweaty lifeboats.

Everything is a larval form of landfill; time is on junk's side.

To live at all is to consume and therefore to do harm.

There is no one so sustainable as the dead. They are being recycled, while we who are still living have to skulk around in this capitalist supermarket scowling at the goods and creating carbon dioxide.

We know what is necessary but we can't find a way to create the passion to do it, to get on with it. We're modern; we treat history as a nightmare which we're struggling to awake, instead of getting ahead of the game.

Industrial futurism: we harness the passage of time, the clock always ticks but that is good. It should be our existential bedrock, and a key advantage for designers and futurists. We personify time, we are made of time, we are historical figures in the making.

The past is quaint. Ideologies are always quaint once time passes. Modern sustainability is that the next generation has as many options as we have; it's options not stuff. The best heritage to posterity is to give them the capacity to make mistakes, not more conserved elements.

Sustainability and modernism present three major design opportunities: 1. Make everything monumental, perfect, and permanent. Everything is sturdy and perfect and cherished, trapping our descendants in a world of our stuff. This will never work. 2. Make everything biodegradable. It's straight for the landfill with our stuff, but it's simply harmless mulch. Use biomimicry. If our toxic materials and steel could do this, it'd be a superb concept, but it's not very possible this century. 3. The bizarre option that resolves the dialectic conflict by a disruptive innovation: instead of making new objects and losing them in the muddle of history and dumping them, we catalog the entire works digitally. We Amazon/eBay the works, creating a giant archive of our possessions. This forms a literal Internet of things. We digitize materiality hook line and sinker. The actual becomes the new virtual. We don't have words even to describe this quadrant [although in Shaping Things he creates the word SPIMES and others to describe this approach in great detail]. 4. Business as usual: we won't last.

Junk is easier if it's labeled, if it's smart, if it can call for recycling itself. The passage of time makes us more knowledgeable, powerful, and capable. Time becomes an industrial asset as we catalog and data mine.

Notes from Bruce Sterling at CCA