Parents, would you trust this thing?

This is one of those concept designs that I find horrific, yet I realize it is the target market's estimation that counts more than mine. And as a non-parent I am not the target market. Before I say any more to prejudice you, have a look at this thing:

Now as to why I find the concept repellent:

When the weather's nice in NYC, it's not uncommon to see a lone parent running with a stroller, particularly along the bike path bordering Battery Park City. Every time I see it I smile; I think it's awesome that the parent is getting their exercise and bringing their baby along for the experience, and I imagine one of that baby's earliest memories will be whizzing along the boardwalk with their mother or father pushing them.

And even if the baby isn't cognizant that they're being pushed, I can't help but feel that that pushing is the key part of the connection. The baby is propelled along by the parent who is physically connected to the stroller, and they both move together.

The idea that this would be accomplished via Bluetooth and a motor seems it would break the bond. Also, the notion that a parent would entrust the safety of their child to a bunch of wires and invisible waves seems crazy to me. 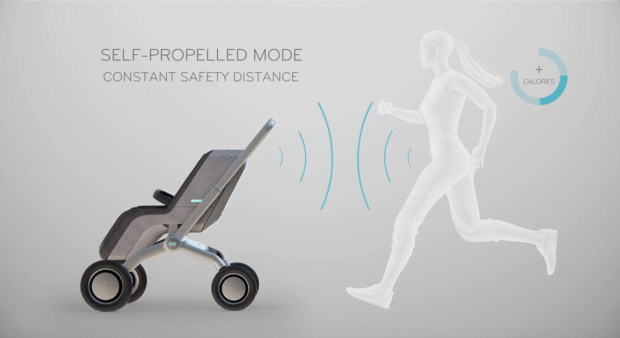 I do appreciate that this object would lessen the physical load on the parent. You only need to watch one lone mother struggle up a subway staircase while carrying a stroller to realize how demanding urban parenting is. However, and this is the most damning part to me, using a smartphone alarm to remind you not to wander too far from your baby is, I think, lessening the wrong load. I would think any responsible parent would have an internal, mental alarm for such a thing. Instead of staring down at your phone, oughtn't ones eyes be in the vicinity of one's baby at all times?

The Smartbe Intelligent Stroller, as it's called, is up for funding on IndieGogo. At press time the $399 object had garnered $58,751 towards an $80,000 goal, with six days left to pledge.