What The Funk: Why Don't Americans Ferment More Stuff?

We Americans don't pickle like other countries pickle. And before you pipe up about how often you make pickles, or your mom does, or that one friend who wants everyone to love kombucha does, that's great but by U.S. standards you're special and internationally we're still behind.

While stateside the word pickle carries a specific vinegary-cucumber meaning, everywhere else in the world it almost always includes fermenting. The history of fermented foods is so long you could argue that pickles helped build human civilization. It's one of the simplest and safest methods of preserving, it can make nutrients more bioavailable and food easier to digest.

Fermentation hasn't always been specialized or foreign to us. Before the rise of mass-produced canned goods American pickles were just as funky, homemade, and diverse as Japan's. Today's fermentation advocates range from gourmet cooks to Pinteresty health gurus, with a well-worn path through homebrewing country. But the practice just isn't as popular here as in countries like China or Norway. Hell, Korea's national dish is a spicy fermented pickle pile!

So what's our problem? 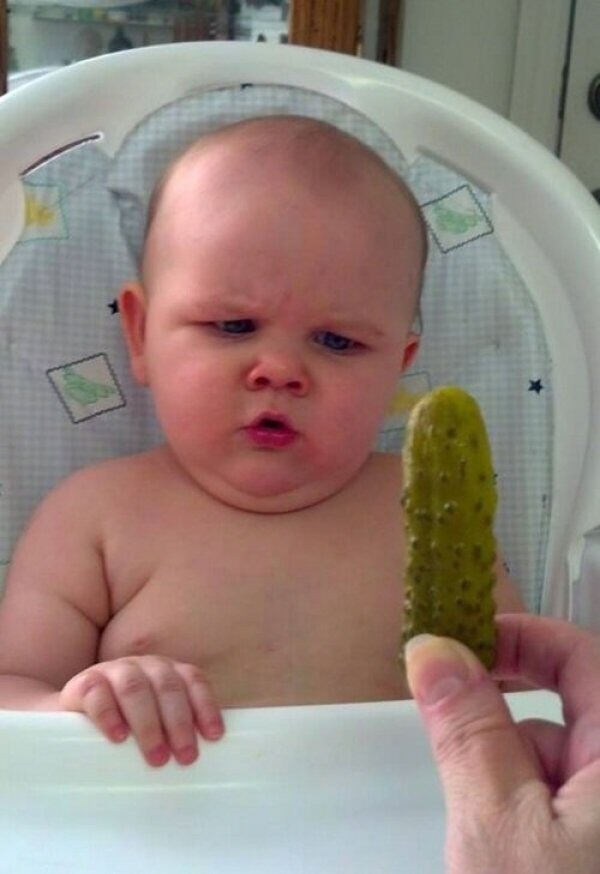 Yes, we're lazy. But even that isn't a great excuse. The easiest, oldest, and most common method of pickling is "lacto fermentation" which uses naturally occurring lactobacillus bacteria to preserve the food while choking out more harmful bacteria that cause rot. No vinegar, no heat, and no complicated pressure canning. You just cover your veggies with liquid, or mash them until they produce their own liquid, and let them sit for awhile.

So why don't more people try it? Is it because it takes time? Is it the hipster/hippie associations? Is the 1950s canning industrial complex to blame? Or is it that we'd rather spend our precious minutes away from the computer making fancy pourover coffee and Snapchatting instead? Probably all of those, but (like a good American) I think pickling's popularity could be increased with cool gadgets, and sleeker tools might be a solution.

Fittingly, the design constraints on tools for lacto fermenting are incredibly simple. Mainly, you need to maintain an anaerobic (oxygen free) environment, where the good bacteria can flourish without exposure to the rot-producing microbes that do enjoy oxygen. Then you need to allow gas to escape while they eat the food and release their little bacteria farts. To do this you keep your foods submerged under liquid.

Kimchi demystified: put your salty cabbage in a pot.

Existing tools used in lacto fermenting range from incredibly oldschool to maybe-sort-of-modern. Some methods would only appeal to the same people who make traditional sourdough from scratch, and some would be at home on late-night infomercials. On the OG end of the spectrum are Korean onggi. These stoneware jars have been used to make kimchi and other preserved vegetables for centuries. They have a loose-fitting cap with an overhanging lip to let gas escape. Like a huge cookie jar, but full of cabbages. 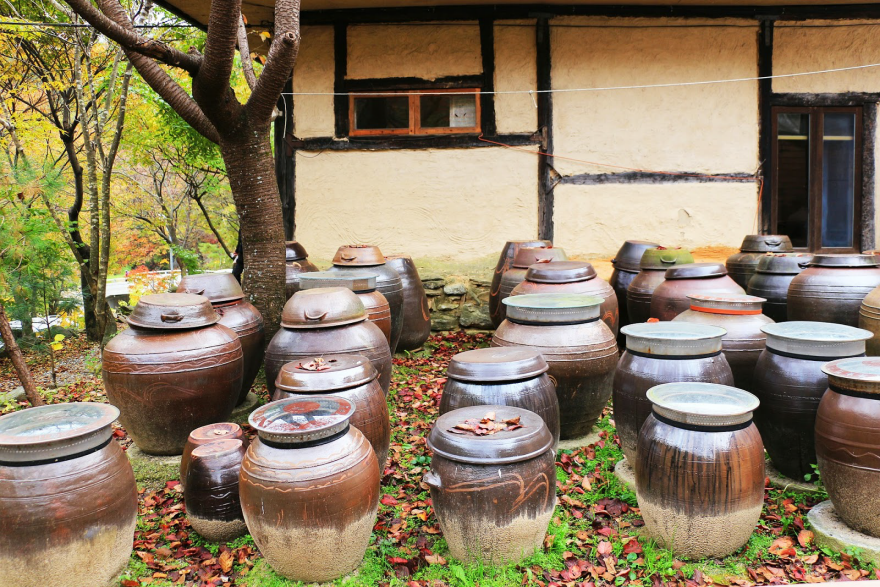 OG Onggi: Happiness is a yard full of kimchi.

Another age-old method is the the water-seal crock. These have been popular in many regions for a very long time, and both European and Chinese styles are still in use. Once filled with vegetables and liquid you keep the food submerged with something wide and heavy. The crock's lid sits in a trough of water that surrounds the mouth of the pot. This water barrier allows bubbles of carbon dioxide to escape the pot without additional oxygen or bacteria getting back in. This adds greater control - and safety - to the process with minimal fuss. 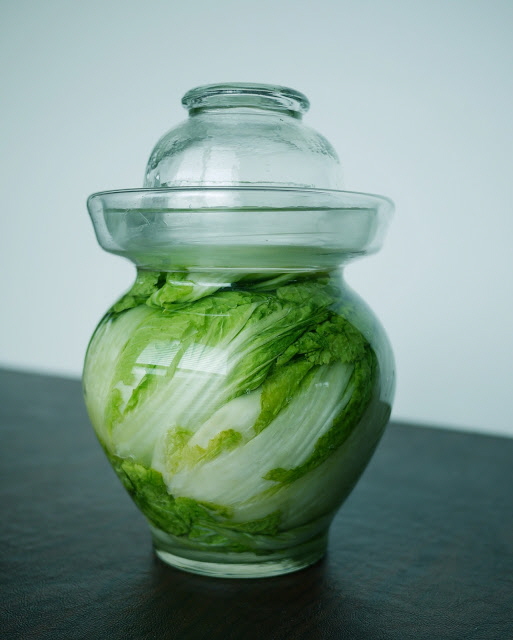 The sombrero brim is full of water.

If adoption of cooking trends was based solely on the attractiveness of the tools, these would probably show the most promise. In addition to the classic water crock styles, contemporary ceramics artists have adopted their own take on the method, and the form invites stylistic interpretations. Overall it's pretty idiot-proof, but would it be possible to update this type to be less heavy or delicate? Could a food-grade silicone, glass or flexible material work, while adding greater dishwasher-friendliness? And why aren't they stackable? I don't just eat sauerkraut. 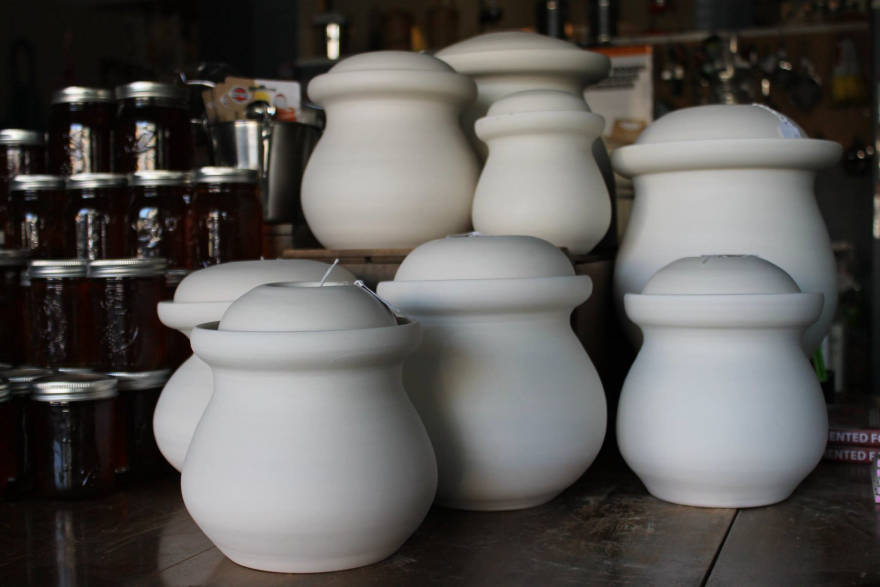 People also use simple canning jars. They're cheap, see-through, and easy to clean... but they don't offer the ability to mitigate oxygen and other bacteria. The Pickl-It is one unfortunately named but straightforward solution for people who want the simplicity of swing top canning jars plus the safety of a water lock. These lids are a pre-made version of a DIY hack, taking an off-the-shelf Fido lid and adding the type of water lock you can buy for a buck or two from home brewing suppliers. 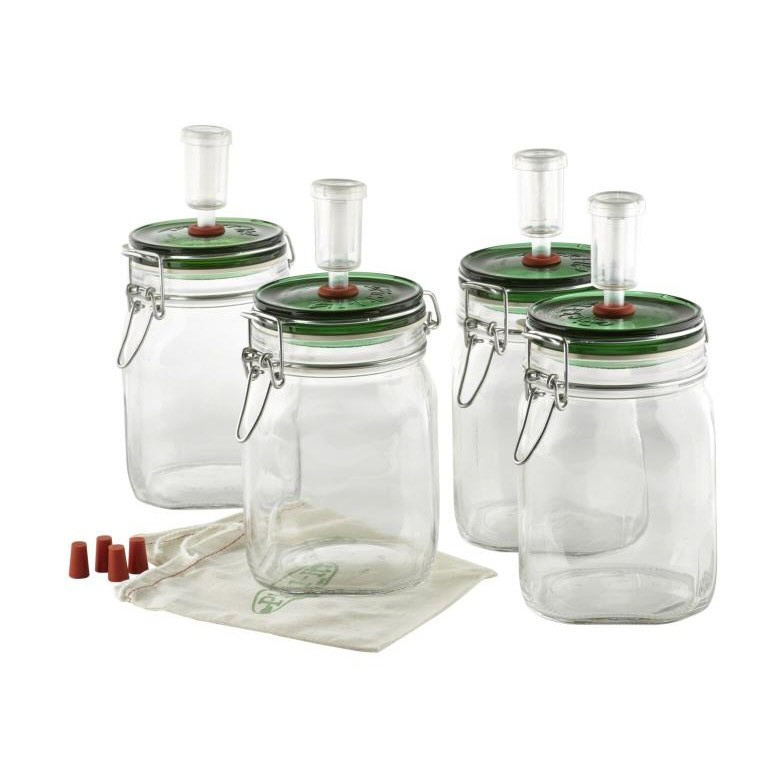 Pickl-Its: The DIY solution for people who don't DIY.

The upside: they're fairly modular and fit a common base. Downside: they're not pretty, not stackable, a little unwieldy, and kind of expensive for what you get. Is it possible to streamline that water port? Definitely. Could you make something more self-contained that fits a standard Mason or canning jar? You know it.

The successfully kickstarted Kraut Source proves there's demand for that. It's a slightly sleeker Mason jar option with a bit more built in functionality. The stainless lid combines the traditional water seal with a spring-loaded depressor to keep food compressed. Plus it still looks rustic and artisanal so your food will take on a hip, Portland-chic terroir. 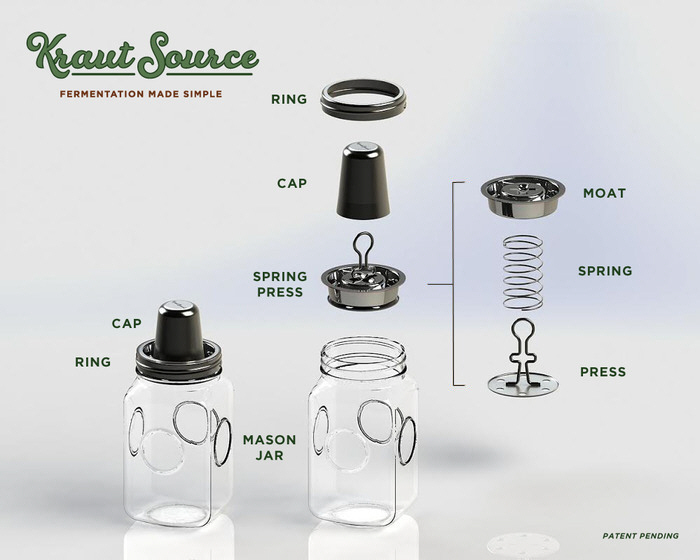 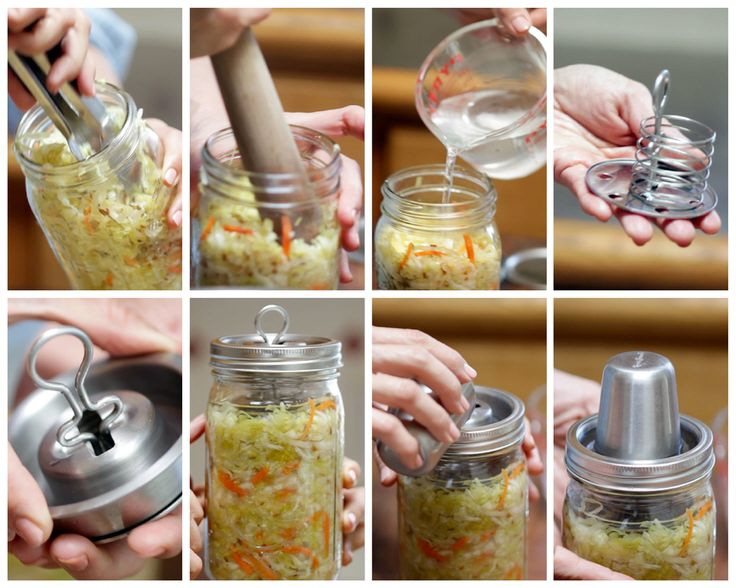 But for the cutest pickle products, look to Japan. Not just adorable, Japanese pickle presses are a surprisingly simple option. While the construction of the most readily available styles (on English language sites) tends on the cheap and plasticky side, the core design is fun. It's just a French press for food! Load your veggies and liquid into the tupperware-like box, and screw the depressor down to keep them submerged. Et voila! Tsukemono or so. 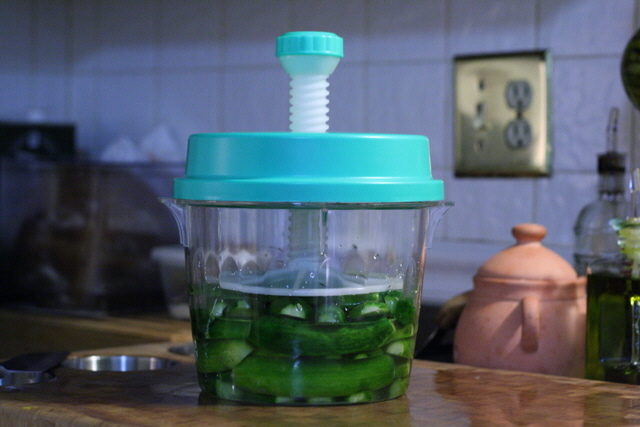 If you have room on your counter for a bullet blender, you could probably justify a pickle press. These little glass ones for quicker pickles do a pretty job by leaning into simplicity. And I'd bet good money that there are tons of beautiful or hilarious versions that my lackluster Google Translate skills couldn't unearth. 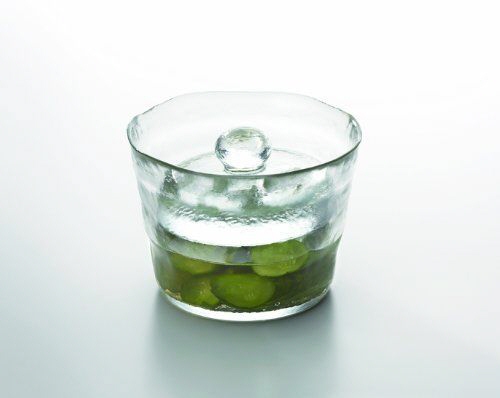 And these are just the simple and traditional jumping off points. It's odd that in this era of whole-foods awareness, high tech home brewing, and sensor-filled kitchen appliances we don't have digital gadgets intended for chic picklers. While the fermentation process is exactly the same when you're using an earthenware pot and a brick, those components could be smartened up. Or maybe just gussied up. A modern chef loves elegant tooling.

What The Funk: Why Don't Americans Ferment More Stuff?