Is This the World’s First Female-Friendly Electric Guitar?

Not exactly—but the St. Vincent design for Ernie Ball is notable nonetheless.

When I first heard that the musician Annie Clark, aka St. Vincent, had designed a guitar made especially for women’s bodies—as has been reported on FastCoExist, Mashable, Buzzfeed and elsewhere—I was stoked to find out more. I remember when my sister went to buy her first electric guitar circa 2006, and was immediately steered by the Sam Ash salesman to a set of pink and floral-decaled models—surely we could do better. But after talking to Clark’s collaborators at Ernie Ball Music Man, it turns out that the “guitar-for-women” angle might have been a bit oversold in the blogosphere.

“Annie never designed the guitar exclusively for females,” says Sterling Ball, the CEO and one of the lead designers at Ernie Ball Music Man (EBMM). “While it’s true that there has never been a major-market solid-body guitar in the history of it to be designed by a woman, none of us saw gender in creating this.”

Maybe not, but you can see where the media got the idea. Clark was not available to talk to us, but in an interview with Guitar World she emphasized the guitar’s light weight and slim profile, which made it ideal for “smaller people and women especially,” and on Instagram she wrote, “There is room for a breast. Or two.”

Still, the real news is not that the guitar is breast-friendly but that it is one of the very rare instances of a woman guitar designer taking the lead. In the past, there have been signature guitars by female players like Joan Jett, Nancy Wilson and Lita Ford, but those have been mildly tweaked versions of existing models; we couldn’t find any other instance of an electric guitar designed totally from scratch by a woman (but please correct us in the comments if we missed an example). “This was Annie’s design,” Ball emphasizes. “It was our job to make it tangible.” 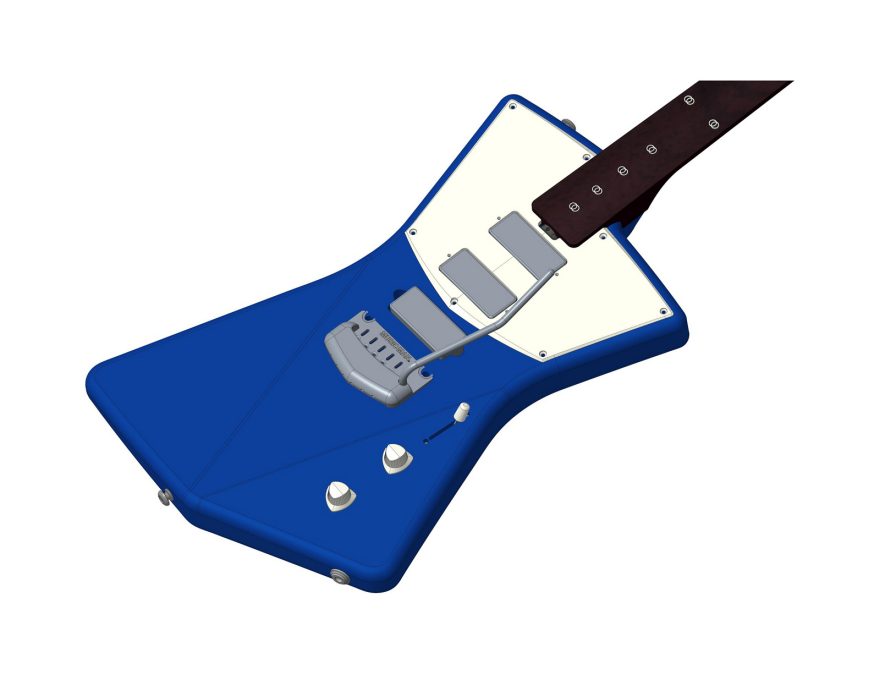 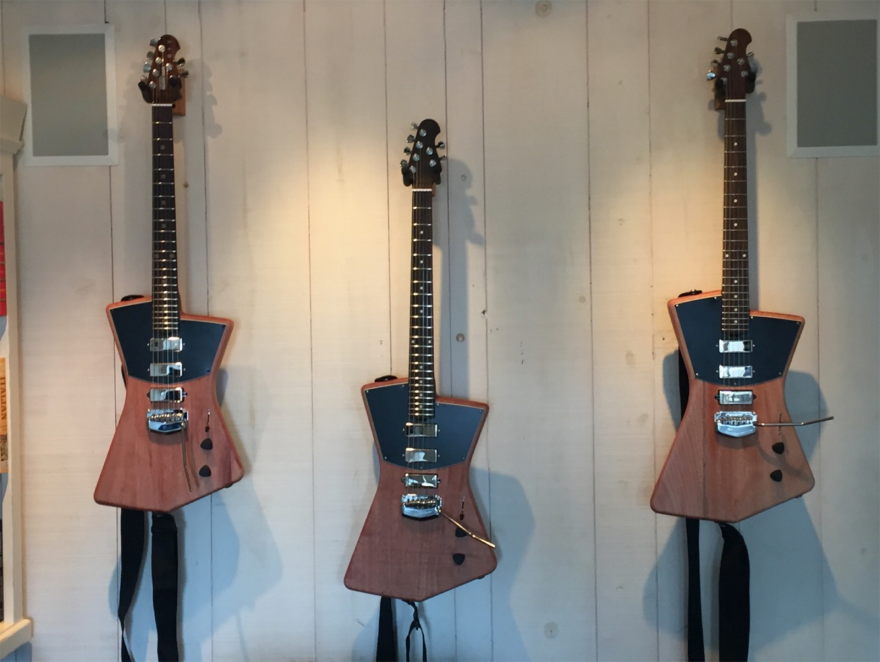 When the EBMM team arrived at the final design, it made playable prototypes that were three, four and five percent bigger than the previous model to find the exact right proportions. 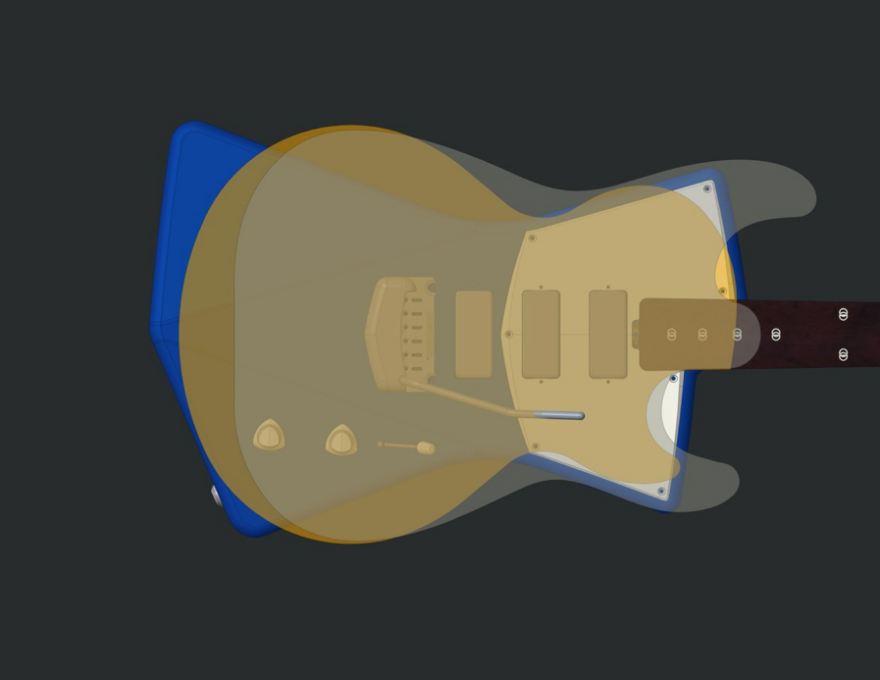 The process started with sketches by Clark, which the EBMM team quickly translated into a 3D model. What ensued was a lot like any design process: prototypes were passed back and forth, over and over, until everyone was satisfied. Ball estimates that EBMM made about 20 prototypes in all.

On Clark’s part, the goals were an exceptionally lightweight object—“I can’t even play a Sixties Strat or Seventies Les Paul,” she told Guitar World. “I would need to travel with a chiropractor on tour in order to play those guitars”—and an aesthetic that drew on Memphis design, 1960s–70s Japanese guitars, German art-pop pioneer Klaus Nomi and classic car colors. (The color scheme is based on a ’67 Corvette.)

Meanwhile, EBMM’s team was concerned with getting the size just right. “When we arrived at the final design, we then made prototypes that were three, four and five percent bigger,” Ball says. “The three-percent, with some minor tweaking, ended up being the home run.” Along with the size, EBMM had to carefully consider the guitar’s ergonomics and balance—although the team found that Clark’s design was already pretty well-considered from that standpoint. “You can draw a lot of guitars, but that doesn't mean that they will play well,” Ball says. “Annie designed a guitar that has a striking visual design that also has exceptional weight and balance and ergonomics. Sort of a ‘tastes great, less filling.’”

Annie Clark, aka St. Vincent, on the new guitar

Ball adds, “There are so many angles to the guitar and they became easy intersections for ergonomic control.” Which isn’t to say that the balancing process was easy, exactly. “You are trying to get the guitar ergonomically correct for hand position, arm comfort and body balance and fit,” Ball says. “Sometimes you fix one and it affects the other.”

Of course, all parties also paid attention to how the guitar sounds, with Clark specifying an unusual wiring setup. “You have one tone knob, you have one volume knob, you have three mini-humbuckers so you get five different configurations of sound and it really has a whole lot of flexibility as a result,” she told Guitar World. “It’s sort of wired in a counterintuitive way, but I think it’s the best use of those particular pickup configurations.”

The final guitar body is about 18.5 inches long, just over 12.5 inches wide and only 1.625 inches thick. It’s made of an African mahogany, which EBMM says provides an excellent tone and sustain. (“All of our tone woods are ethically harvested from certified suppliers,” Ball notes.) It’s available in black or blue starting at $1,899.

EBMM is already hoping that this is just the first product of its collaboration with Clark—Ball says he would like to “build a family of guitars that Annie Clark needs to support her art and craft.” As long as they stay away from floral decals, I can’t wait to see what they come up with next.

Is This the World’s First Female-Friendly Electric Guitar?